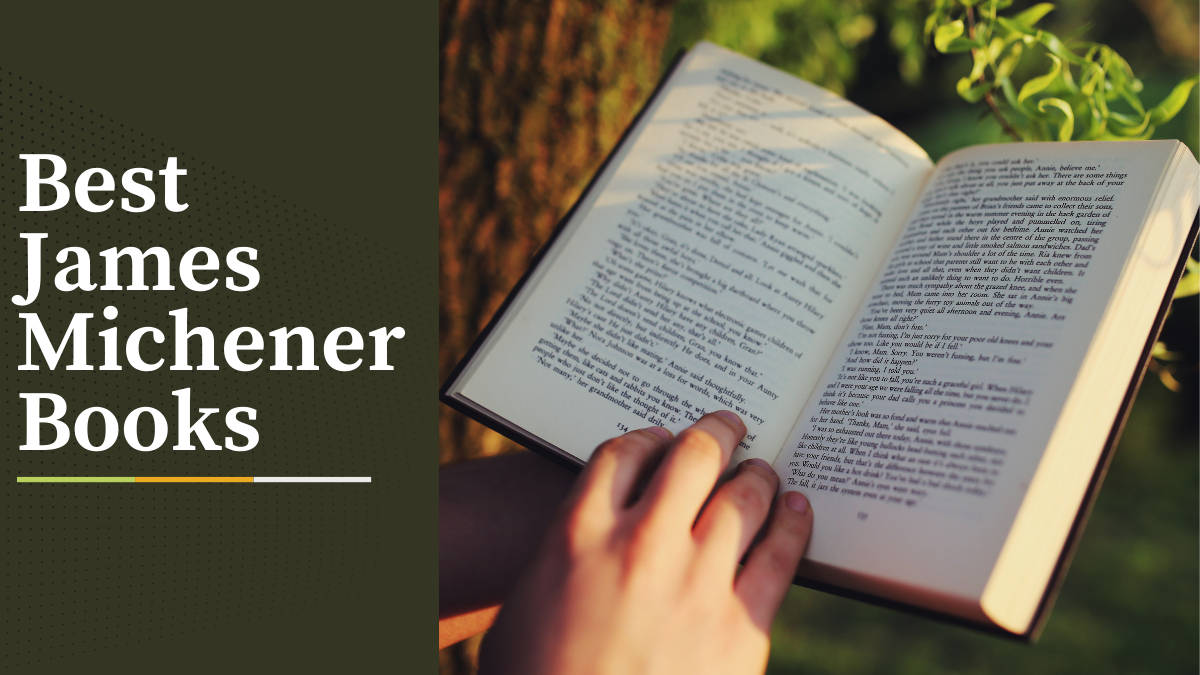 A popular American Novelist who became the New York Times Bestselling author numerous times for his historic, some of the most unique works of Fictions and Non-fictions, James Michener is a brilliant writer when it comes to historical sagas, and exploring the historic formation of the continent of America and its important States.

Michener won the Pulitzer Prize for his first work of Fiction Tales of the South Pacific, and later, his other notable works like Centennial, Texas, Hawaii, and Chesapeakebecame bestselling novels across the country, and even began to be praised worldwide. Mostly incorporating his own experiences, travel stories, and exploring his interest in the history of American States, truly, the works of Michener are authentic and most unique in style. If you are looking for something different and interesting to read, that is different from mainstream genres, then James Michener is going to win your heart for sure. Although Michener has written more than 40 books, here are the 10 best books that should definitely be on your “must-read” list.

Hawaii by James Michener was published in the year of 1959 and features the author’s experiences of serving in the Pacific Theater in World War II, and his life in the island of Hawaii thereafter, which largely documents its people and culture. Someone who is fascinated with Hawaii will love to read this book for Michener, by creating fictional characters takes back readers to the time, when the first group of Pacific Islanders made their way to this exotic island, that later attracted people of any ethnicities, including immigrants of New England, Chinese and Japanese.

Hawaii will take you deep inside the wild get beautiful landscapes of the island, the volcanoes, Hawaiian Folklores, and its beautiful people who live in harmony with nature. This historic novel begins right from the formation of the island of Hawaii and tells the fascinating story of how it eventually became a heaven for people, who became islanders. Hawaii was adapted into a successful film in the year 1966.

2. Tales of the South Pacific

The first work of fiction by Michener that made him the New York Times Bestselling author, and also that made him win the Pulitzer Prize in the year 1948, Tales of the South Pacific became so popular, that it was later adapted into an equally popular film by the name “South Pacific” in the year 1958. A novel that became extremely popular for its fascinating story, that lets readers explore the South of thePacific at the time of World War II, and the fascinating story of a Marine, who falls deeply in love with a beautiful Tonkinese woman.

Amidst the horrors, destruction, and chaos of war, readers get to witness a heart-warming romance that disregards cultural diversity and racial prejudice and instead weaves a plot that is fascinating to read. The bond of Liat the Tonkinese woman, and Joe Cable a Comrade will leave an everlasting impression on readers.

Exploring the epic history of Texas from his Spanish roots to its current reputation and importance in the country, James Michener yet again presents readers with a monumental saga that is truly captivating. At the present stage, Texas is undeniably one of the most important States of the United States, but have you ever wondered what it was like before? How it came to become such an important part of America? Michener has beautifully framed this novel by bringing together the past and present, to draw a comparison of how Texas used to be, to what it is today.

Through his impressive characters, and a plot weaved perfectly, Michener lets readers explore the different phases of Texas, from patriotism and statesmanship, growth and development, to violence and betrayal, it is truly a stunning tale.

The Source focuses on the mythical site of Makor near Jerusalem, during an archaeological dig, and explores the history of Judaism. During the dig, many artifacts are unearthed including, the remains of Roman Temple, Basilica, Synagogue, Mosque, and Castle, and to much surprise from the same sight. The plot takes place around 1960s in Makor, which relates to these artifacts and tells their story.

The richness of this novel comes from its various traditions, cultures, religions, and the development of important religions like Paganism, Judaism, Christianity, and Islam. The novel basically traces the Jewish history, along with the culture of the people of Makor. The plot is weaved so beautifully with the help of history and source, that it becomes a thorough, interesting read.

A book that takes you to the time when Alaska was not even a place to be habitat by humans, billions of years ago, and then slowly takes you to its history of origin, it’s becoming a part of Northernmost America, and then slowly being invaded by people mostly for the trade of expensive pelts. Beginning with his signature style, Michener takes readers first to the origin of Alaska and then explores how the Russians first expanded and then sold Alaska to America later on.

From Gold, Rush, trade of expensive pelts resulting in numerous slaughters to diving in deeper into the culture of the natives, Alaska will take you on a wonderful experience of hunting, fishing, trading, and surviving under some of the harshest conditions on earth. Those of you who are fascinated with Alaska, and want to know about its history in the most beautiful way, will definitely admire this amazing novel.

Published in the year 1978, Chesapeake takes readers across centuries to trace the history of Chesapeake Bay in Maryland and Virginia between 1583 and 1978, and its people. The novel beautifully portrays the history of America’s Eastern shore that was once home to the aboriginal Indian Tribe, and then invaded by the English Colonist, and then moving ahead to the times of Slave, Trade, Civil War, and finally the World Wars.

The plot is told through the Voyages that the characters are part of, and the narrative voice is omniscient. This Classic will take you to the American roots during the time’s Natives were at peace, to the modern age where rapid modernization is effective humanity. Through the characters of Edmund Steed and Captain John Smith, Michener presents a harrowing journey across the Atlantic to discover a “New World”, and the events that follow are extremely interesting.

7. The Bridges at Toko-Ri

Another Michener’s novel that became a successful film in the year 1954 by the same name, The Bridges at Toko-Ri is a novella that tells the story of American men who fought the Korean War, putting more focus on the air attacks, and also the chaos on the battlegrounds.

Young and innocent, the American soldiers and Fighter pilots are trained to prepare for a war that they have no idea about, and arrive at a place that they have barely heard of, and their only hope of survival is to “win”. The massive ships carried as many Planes and Helicopters as possible, and with them, countless men to fight an unknown fear, who were American Fighter Pilots. A heart-touching plot with real-life scenarios, The Bridges at Toko-Ri is undoubtedly a remarkable classic.

Caribbean  by Michener is a novel that will entice you for its portrayal of the formation of the Caribbean islands dating back to the 1300s. From evolving as a string of uninhabited land, to the conquest of the Arawaks by Cannibals to the decline of the Mayan empire, from the arrival of Christopher Columbus to the notorious reign of Henry Morgan, these string of glittering Caribbean islands have been through a lot and has a lot to tell to the modern world.

Recording the history of 700 dramatic years, readers cannot help but get absorbed into this captivating masterpiece that remains a celebrated classic to date.

Centennial is told as a story as presented by its characters, that takes readers back to the time along the South Platte River, and the Colorado town of Centennial, including the tale of how the mountain ranges and plains came into being. The plot begins with the character of Dr. Lewis Vernor a historian, who is hired to conduct research on Centennial, Colorado, a small town on the South Platte River. And it is during this Research, Michener beautifully introduces readers to the geological, cultural, political, and economic realities of life in Centennial since it was formed and came to be habitat by humans.

From Dr. Vernor, Michener then takes readers deep into the lives of the Centennials through the character of Lame Beaver, who talks about “his people” and his tribe. Centennial is an interesting read for those who want to gain deeper insight into the lives of indigenous lives, and they’re coming into being.

A novel that deals with the Iran-Contra affair, Michener in Legacy, conjures the triumphs and lets the readers explore the tragedies of one family who have a dynamic role in shaping the history of the United States. WhenMajor Norman Starr of the National Security Council prepares to appear before a congressional committee to publicly account for his covert actions, he seeks guidance from the lives of his ancestors, particularly those who made terrible mistakes.

From a Framer of the Constitution to a Slave Owner, from a Supreme Court justice to a courageous Suffragist, Starr takes guidance from each of these ancestors and uses their Legacy to pave the right path for him. A notable novel that puts major emphasis on “Legacy” and how it follows its trails to generations, Michener never fails to captivate his readers.

These 10 remarkable novels by James Michener are not only celebrated classics, but also take you thousands of years back to trace how the important areas of today’s America had been, and how they came to be in the position they are today. Mostly focusing on history, chronicles and the sagas of tribes and the formations of landforms, the style of Michener in weaving these plots is truly unique and remarkable.