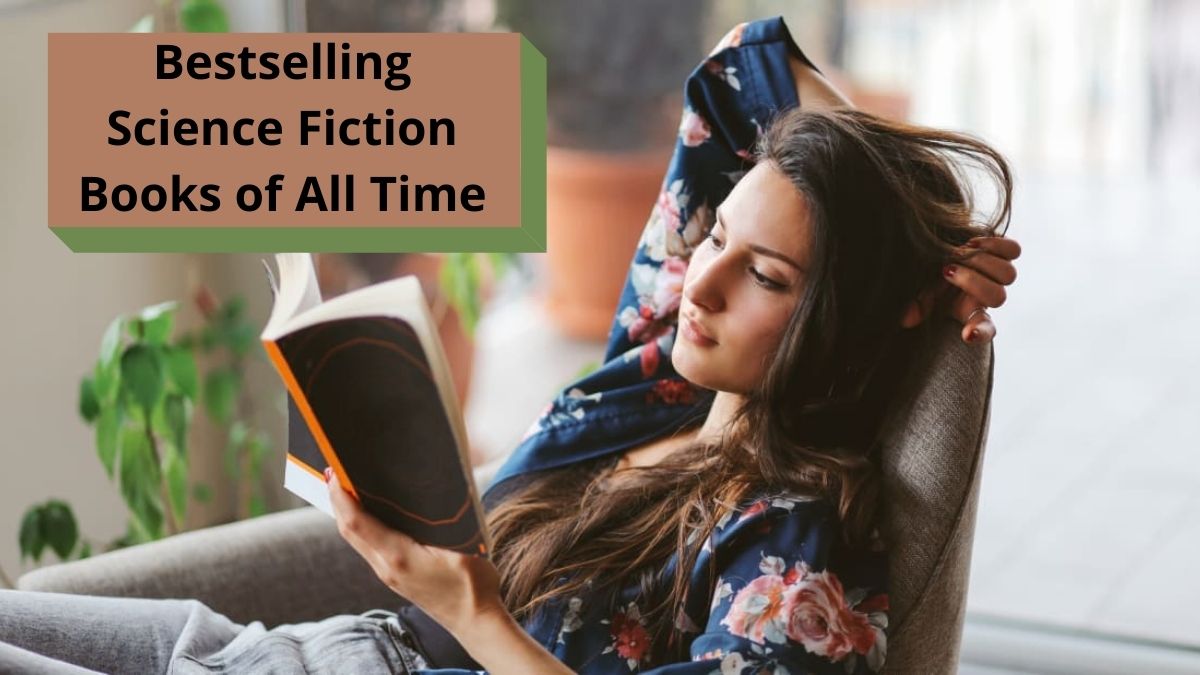 Undoubtedly, Science-fiction is one of the most intriguing, and popular genres among readers worldwide, for it portrays the power of imagination mingled with the wonders of Science, that give birth to works that are too fascinating and entertaining.

For hundreds of years, the greatest authors of the world have presented the world with unbelievable tales where Science and Fiction come together to give an out-of-the-world reading experience. Since it is fiction, anything can happen with the help of Science, and any illusion can turn to reality with the author’s unique imagination.

If you are a lover of Sci-fi, are thinking of reading some of the best science fiction books ever written, then here are the best ones of all time. These books will not only take you on unbelievable journeys into the fictional world but also will leave you spellbound.

One of the best Science-fiction of all time, George Orwell’s 1984 is set in a dystopic world where everything is controlled by The Party, and everyone knows “Big brother is watching you”. Imagine living in a world where your life is controlled by the Government that is not at all benevolent rather the opposite. Your every move is followed is by the party, and most importantly, you have to live according to the Government’s strict rules and regulations that actually take away the normal rights of people. So it is the case with the protagonist Winston Smith, a citizen of Oceania, and works in the Records Department of the Ministry of Truth, which handles all Party publications and propaganda. There are other three ministries such as Ministry of Love, Peace and Plenty, but in a country where the party’s slogans are War is Peace,” “Freedom is Slavery,” and “Ignorance is Strength”, will a character like Winston be able to make a change? He seems to be a person who is not impressed with the party’s rules and slogans, what will he do to change it?

The book has more interesting events than our imagination.

A classic, that will forever remain a remarkable Science-fiction, The Time Machine by H.G. Wells tells the story of a man who invents the time machine and travels back and forth to the past and future with the help of it. Published in the year 1865, the plot revolves around the protagonist and the narrator who is known as The Time Traveler, who succeeds in making a time machine.

With his time machine, The Time Traveler travels to a distant time and lands up in 802,701 AD, a place from the future that looks like an empty space, where cities and the crowds are gone, and everything is quiet as death. The novel records a lot of interesting events of The Time Traveler that is no less than exciting adventures. The novel has many interesting events to unfold, and even though they are fictional, readers will forget about reality, and get enticed by the unbelievable adventures of time travel.

Brave New World by Aldous Huxley is a dystopian novel, that presents readers with a glimpse into a future where technology has reached its peak, and humans are no more like they used to be, every second of their lives depend on technologies.

Set in 632 A.F (After Ford), a year that is named after Henry Ford the famous industrialist, where the World Controllers are the leaders of the society. This is a world where there are five tiers of caste system named Alpha, Beta- the upper class and Gammas, Deltas, and Epsilons are at the bottom and represent the world’s industrial working class.

In, this dystopic world where no one feels pain or is unhappy with the help of a drug named Soma, is everything as perfect the way it seems? Or the novel has much more to reveal? Find out all the answers in the novel and time travel into a future where humans are no more humane.

The Lord of the Rings by J R. R. Tolkien is undoubtedly one of the most popular Science-fiction series that became so popular across the world, that it has also been turned into series of movies that are even more successful.

The series portrays the War of the Ring in the fictional Middle Earth that clearly reflects Tolkien’s real experience in WWI. The series is divided into 4 parts namely The Hobbit, The Fellowship of the Ring, The Two Towers, and The Return of the King that feature fantasy and an ever-engaging plot. A fictional world that is too hard to believe, but as the readers begin to read it, they cannot rest until they are done with the whole series. Full of interesting, peculiar characters and events that are nail-biting and sometimes spine-chilling, The Lord of the Rings has been regarded as one of the best series ever written in the world.

Published in the year 1969, this extremely popular Science-fiction novel by the American author Kurt Vonnegut deserves a mention for presenting the world with his finest work of fiction in Slaughterhouse-Five. Considered as one of the most significant anti-war novels, revolves around the character of Billy Pilgrim and his experiences in WWII.

Billy is not a good soldier, he is not as skilled as his fellows, but in no time he finds himself involved in a battle along with a strange, arrogant bully named Roland Weary. Billy then is captured by the German troops and kept in prison, the novel records the true picture of war, the treatments imposed on war prisoners, the technologically advanced weapons used in wars to destroy each other, and many heart-touching events. This novel is truly captivating and deserves a read by readers of all kinds.

There is no doubt in the fact that Frankenstein by Mary Shelly is one of the best works of Science-fiction ever written in history. Written at an age when women writers were quite a few, and less popular, this ground-breaking novel mixed with science and horror is truly a classic.

The plot revolves around the gifted scientist Victor Frankenstein who encounters Robert Walton an English adventurer who was on his expedition to the North Pole.

Walton in his ship comes across an emaciated man who is now near to his death, and in the letters to his sister, he retells Victor’s tragic story. Victor is so talented as a scientist that one day, he decides to bring life back to a dead body, he uses all his knowledge to make that happen. But when his dream actually comes true, he feels guilty about having created a monster who is dangerous for mankind. The novel records many events of guilt, horror, destruction, and much more than the readers will be shocked to discover. There cannot be a comparison to what Mary Shelly has given birth to in her novel Frankenstein.

A sci-fi novel later turned into a film for its extreme success worldwide, 20,000 Leagues Under the Sea by Jules Verne features a kind of adventure tale that revolves around science and fantasy, and will leave an everlasting impression on readers.

This fantasy novel is about a French marine biologist Pierre Aronnax who joins hands with an American mission to hunt down a sea monster who has been creating utter destruction under the sea. A plot that seems too unrealistic to believe, but as soon as the readers begin with it, they are going to forget everything about reality and fantasy, and experience a unique nail-biting adventure “20,000 leagues under the sea”, where Science brings success to the human mission.

8. The Handmaid’s Tale by Margaret Atwood

A Science-fiction that is like no other, Margaret Atwood’s The Handmaid’s Tale is one of the most unique works of modern fiction. This bestselling novel by the Canadian author became so popular worldwide, that it gave rise to an equally popular series in Netflix under the same name. It is suggested that you watch the series only when you are done with the original text, otherwise, you will miss its authenticity.

Set in the dystopian world of the Christian Fundamentalist Theocratic Regime in the former United States, the wives of important and powerful officials are seen to suffer a crisis of infertility. In order to overcome this crisis, the government secretly kidnaps women from the outer states and converts them into Handmaids who are responsible for bearing children for the rich and powerful families. The narrator of the novel is a Handmaid who is assigned to work and have sex regularly with the Commander in order to bear a child, she is confined to one room and has a particular uniform. This confinement that is an utter punishment when questioned for the sake of humanity, the novel brings out many dehumanizing events that are shocking yet captivating.

Set in the 24th century, Fahrenheit 451is a remarkable Science-fiction novel by Ray Bradbury that explores the story of Guy Montag, who is a fireman by profession. The novel features Montag’s struggles, his encounters with other characters of the novel, and mostly his quest to find the answer to his question that is, the value of his profession of burning illegally owned books and the homes of their owners.

Montag has many truths to uncover, many events to unfold, and take readers on an intriguing journey through his own journey of discovering the truth.

10. A Clockwork Orange by Anthony Burgess

A sci-fi novel by Anthony Burgess that is so unique, and became so popular that it was adapted into a movie by the same name, that was equally confusing and interesting. Set in a futuristic city, the novel revolves around Alex, and his gang called “droogs” who are mischievous and go on a crime spree. Alex and his group break into a couple’s house, captures the man, rapes his wife in front of him. The droogs break into other houses to do mischievous things. Now the question arises are the gang of teens mentally retarded? The novel follows many such peculiar events, including Alex’s imprisonment, the various experiments of punishment and so much more. A Clockwork Orange is going to be the most unique book you have ever read in your life.