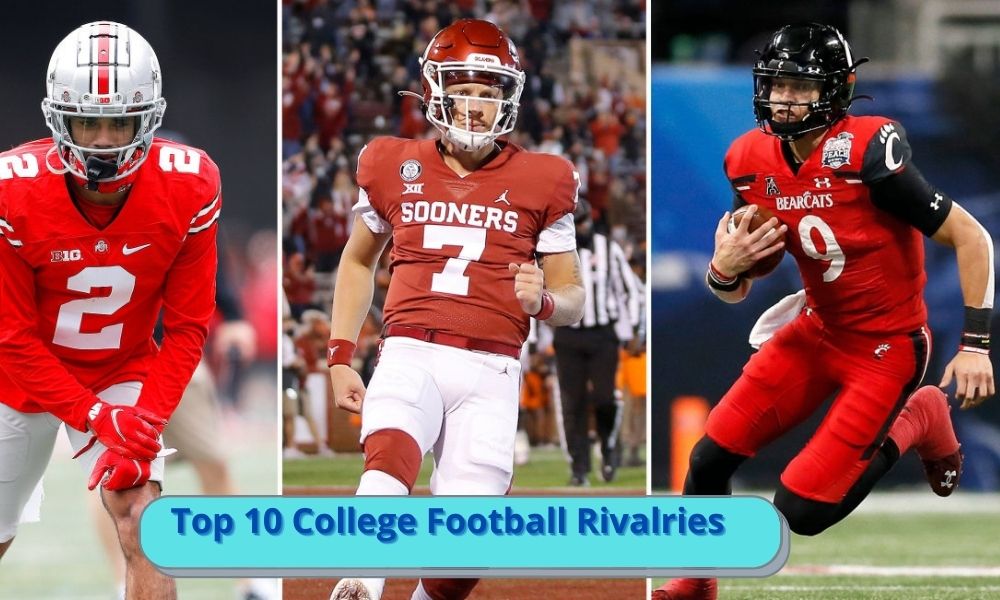 Rivalries are the lifeblood of college football. When two classic rivals meet on a college football field, one game may determine a record, a season, or a legacy. Rivalries are a big aspect of college football, and they’re important for bragging rights and recruiting purposes. It defines an overall sense of pride for a year more than anything else, and the worth of those bragging rights simply cannot be quantified. Geographical, cultural, and historical rivalries are common. Rivalries, on the other hand, can change depending on the coaches involved, the present performance of the teams, or league realignment.

As another college season comes to a close, let’s take a look at the top 10 rivalries in this incredible sport. These are the finest games to watch every season, from rivalries between colleges in the same city to a series that allows us to appreciate America.

These two teams, often referred to be the finest rivalry in sports, hate each other. If you are a kid who grew up in Alabama, you are expected to select one or the other from an early age. Even though this rivalry is typically filled with animosity, these two teams frequently assist one another in times of need. This rivalry plays more like a sibling rivalry, from the Tigers’ storm assistance after the Tuscaloosa storms in 2011 through fundraisers for fallen players. The Crimson Tide now has a 47-37 win-loss record against the Tigers, with one tie. Both clubs’ fans yearn for victory, and a defeat means a year of sorrow for friends, coworkers, and even family members. It’s enough to make one want to crawl in a corner and cry.

There isn’t any rivalry with more national clout, and it peaked in 2006 with the No. 1 vs. No. 2 matchups. This rivalry is as historic as they come, with 116 encounters between the two teams. In fact, Ohio State supporters and inhabitants of Columbus, Ohio, where the college is located, will refuse to use the letter “M” throughout this series. Due to conference bowl tie-ins, this game has been a deciding factor for a Rose Bowl bid from the 1970s until the mid-2000s. Michigan has 58 wins to Ohio State’s 51 in this series. Six times, these two have been tied. There may be games that equal the rivalry between these institutions, and there may be competitions that are just as significant. None, however, brings the two together in such a volatile package. Since the advent of Jim Harbaugh as Michigan’s coach in 2015, this rivalry has taken on new energy, albeit Harbaugh is still seeking his first win in the series since Ohio State had won the previous eight games.

Try to go to this game without feeling a sense of patriotism. The Army paratroopers will get you if the Super Hornets’ flyover doesn’t. If you miss the Cadet and Midshipman parades, the nonstop spirit videos on the big screen will fill the void. No matter what the score is at the end of the game, America is the winner. Since it is played in the middle of December, this game is frequently one of the few games of the weekend. Both sides have had deep mutual regard for each other since the start in  1890. There are several traditions associated with this game, including the attendance of the president, the game being played at a neutral venue, and the students attending in uniform. This game is part of a three-way rivalry that also includes the Air Force, however, the Navy leads the series 61-53-7.

Every year, these two Big 12 powerhouses clash in Dallas’ famous Cotton Bowl. The Cotton Bowl in Dallas has a unique feature in that both locker rooms open onto a shared hallway, allowing players to enter the field through the same tunnel. Because it is almost midway between the two campuses, this location was chosen. Even though the game is always scheduled around the Texas State Fair, it has only been played twice in the same season in its 120-year existence. The two teams met in 2018 for the Big 12 Championship Game. With 62 victories to Oklahoma’s 49, Texas leads this rivalry. Five teams have been tied by these two teams. Each of the last seven regular-season games has been decided by seven or fewer points. Although the Red River Showdown takes place in October, a victory in Dallas has sparked multiple championship campaigns, as well as destroyed countless high hopes.

Not only do these two illustrious programs share a city, separated by only 14 miles, but they also alternate between two of the sport’s most iconic venues. While USC plays their games at the Los Angeles Memorial Coliseum, UCLA plays at the Rose Bowl in Pasadena. Throughout the twentieth century, these two teams wrecked each other’s seasons and frequently met, with both teams being ranked. It was always a national rivalry, with six top-10 matchups between 1965 and 1976. The 1967 edition, which included top players Gary Beban and O.J. Simpson, is one of the series’ crown jewels, but it’s a rivalry that’s lost some luster in this century. USC now has a 49-32-7 lead over UCLA in the rivalry.

Both USC and Notre Dame have seven Heisman Trophy winners, with the majority of them making an impact in this game. Fans have waved crucifixes towards Anthony Davis and yelled, “You must be the devil!” during this rivalry. The Irish and Trojans have played so many big games on the national stage, but one quote alone demonstrates the blue-blood rivalry’s sometimes supernatural power. The “Bush Push” game in 2005, a 34-31 USC victory with a dramatic conclusion at Notre Dame Stadium, may have been the series’ pinnacle. Since then, the Trojans and Irish have split 14 games.

During the 1990s, when the Hurricanes and the Seminoles met, there was more talent on the field than in some NFL stadiums. Everyone was eager to put up a show. Although this clash lacks the long-standing tradition and history of other rivalries, the level of animosity is comparable. Both Miami and Florida State have a tumultuous past as members of the Atlantic Coast Conference. There have also been some timeless gems. Fans of Florida State still shudder when they hear the words “Wide Right,” while Miami fans still remember the 34-3 loss their team suffered in 1984. Miami currently leads this rivalry with 35 points to FSU’s 30.

Although the Crimson and Bulldogs did not play in the first-ever college football game, both institutions had a hand in shaping the game into what it is today. The schools’ meeting in late November is a history lesson disguised as a high-class tailgate party. Although Harvard and Yale no longer participate at the top level of college football, they are inextricably tied to the sport’s origins. Last year, the two teams played a 50-43 double-overtime thriller, which Yale triumphed on their home turf.

While the “World’s Largest Outdoor Cocktail Party” is no longer an official title, this yearly showdown continues to be one of the most thrilling events of the year. Except for the players, everyone is in a good mood by game time. From Georgia’s stunning comeback in 1980 to Florida’s sloppy ’93 victory, the Bulldogs and Gators have had some masterpieces throughout the years. This rivalry is so intense that neither team can agree on when the series started. While Georgia claims the first meeting took place in 1904, the University of Florida claims the first meeting took place in 1915. The Gators argue that their 52-0 loss in 1904 doesn’t count since they hadn’t started playing football yet.

These two PAC-12 institutions have faced off in epic showdowns over the last 123 meetings. To some, the Big Game is a wine-and-cheese affair, and the schools’ NoCal addresses reinforce that notion. However, there is no disputing that these colleges have a strong desire to beat one another. It’s a classic case of private (Stanford) vs. public (Cal), and the stakes go well beyond who brings the finest pinot to the pre-game party. What other rivalry can offer a game as bizarre as the 1982 matchup: “The band is on the field!” Cal beat Stanford 24-20 last year to snap a nine-year losing run in the Big Game.