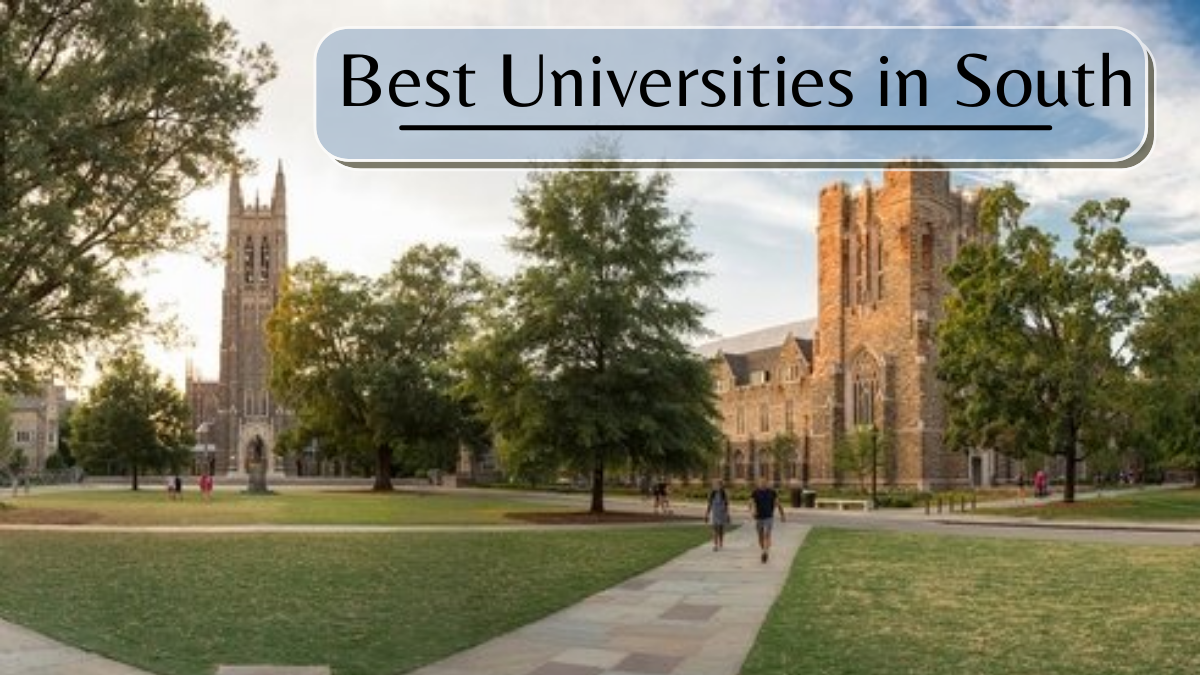 There are several top colleges and universities you hear and read about. But which one of them is actually good? Today we answer that question for you. Southern colleges continue to gain steam in a list dominated by Northeastern Ivy League institutions

Today we will list the top Universities in the South for you to enroll yourself or your child in. Now the universities on this list were chosen based on their recognition, popular courses, the total number of courses, and much more.

Known for its powerhouse in athletics, Duke combines academic skills with top college sports teams. Duke’s ten schools and colleges offer majors in computer science, economics, and public policy. Students use what they learn in the classroom to real-life scenarios as Duke also has 11 institutes and centers and locations in Singapore and China. The University offers over 600 student organizations, from culture and diversity groups to Greek life. A list of notable former students, including billionaires Melinda Gates and David Rubenstein and NBA star Kyrie Irving.

An excellent research institution with a 300-acre campus in the heart of Houston. The student-to-faculty ratio is 6:1, which results in more intimate classroom settings. The University offers more than 50 majors, from traditional and popular economics, biochemistry, and cell biology to bassoon performance. The school gives out generous financial aid packages as Rice has a $6.3 billion endowment fund.

The University has had a presidential past as George H.W. Bush was an adjunct professor at Rice in the 1970s. Billionaire venture capitalist John Doerr, writer Larry McMurtry and the astronaut Peggy Whitson are some of the people Rice has as their alumni and nine astronauts and two Nobel laureates.

One of the leading private research institutions in the South, Vanderbilt University, was founded in 1873. Today, the University offers 64 undergraduate programs across ten schools and colleges, and the most popular programs are in education, law, and medicine. The popular areas of study are computer science, economics, and human and organizational development. Vanderbilt has many research centers such as the Center for Latin Ameican Studies, the Center for Digital Humanities, and the Center for Integrative and Cognitive Neuroscience.

Vanderbilt has a 330-acre campus that gives undergraduates professional and cultural opportunities. Students have the privilege to participate in more than 500 clubs organizations, and undergraduates can join one of 20 fraternities and 15 sororities on campus. Some alumni are former Vice President Al Gore and Grameen Bank founder Muhammad Yunus and six Nobel Laureates. James Patterson and Dinah Shore are also graduates.

The University of Virginia offers 80 degrees, along with graduate programs. Summer Sessions and January Term classes indulge students with particular interests and niche topics not offered during the traditional academic year. There are 900 clubs students can be a part of. The University is also home to the Jefferson Literary and Debating Society, the oldest continuously existing College debating society in America. Several secret societies have been established at the University as well.

The Jefferson Scholarship offered by the University covers the total cost of attendance. The University of Virginia Health System is a well-known academic medical center and is the main contributor to the University’s revenue. Notable alumni include journalist Katie Couric and actor Tina Fey.

The University is known to provide a liberal arts education for the past 270 years. Students can choose from 40 different courses. The College is also home to the Williams School of Commerce, Economics and Politics and the graduate School of Law. The University runs on a three-term calendar, where students partake in coursework or abroad study programs over the four-week spring term. Students can take part in over 150 clubs, including Greek life.

William and Mary is the second-oldest institution of higher education in the United States, and the first University to establish Greek organizations and teach political economy. The College of William and Mary is one of the top public colleges globally. With more than 40 undergraduate programs, with business and social sciences topping the list for the most popular majors.

With its dual-degree partnerships, William and Mary allow students to pursue joint degrees with a tie-up with the 600-year-old University of St. Andrews in Scotland and with the engineering school at Columbia University. Three United States presidents graduated from the William & Mary, and they are Thomas Jefferson, James Monroe, and John Tyler. Some other alumni include Jon Stewart, James Comey, actor Glenn Close, and comedian Michelle Wolf.

Students at Davidson College live honorably in their academic and professional lives. The college offers 29 majors and 40 minors, with the most popular being political science and biology. At the college, 72% of students participate in internships and 73% study abroad. The campus is on Lake Norman, which is beautiful. The students take great advantage of the outdoors. The college has about 200 student organizations and Division I sports that students are encouraged to participate in. 95% of students prefer to live on campus. By meeting 100% of students’ calculated financial needs, Davidson is the first college to eliminate loans. Davidson has 23 Rhodes Scholars as alumni. U.S. President Woodrow Wilson and NBA superstar Stephen Curry also went to Davidson.

Emory University was founded in 1836. The University offers 80 majors and 40 doctoral programs, with the more popular ones being business, nursing, and biology. The University is also known for its business school and school of nursing.

The school offers merit-based scholarships through its scholarship program. Emory has over 500 clubs and organizations that students can be a part of. Emory has 19 varsity teams compete in Division III. The school’s mascot is a skeleton named Dooley. Some alumni at Emory are Kenneth Cole, NBC newscaster David Brinkley, and politician Newt Gingrich.

The campus is known for its beauty in all four seasons. Students can be a part of 250 clubs. The University offers several full-coverage scholarships to its students. The University has 22 fraternity and sorority groups. Wake Forest has produced four Marshall Scholars, 16 Truman Scholars and San Antonio Spurs legend Tim Duncan.