Top Ten Things to Do in Los Angeles with Kids 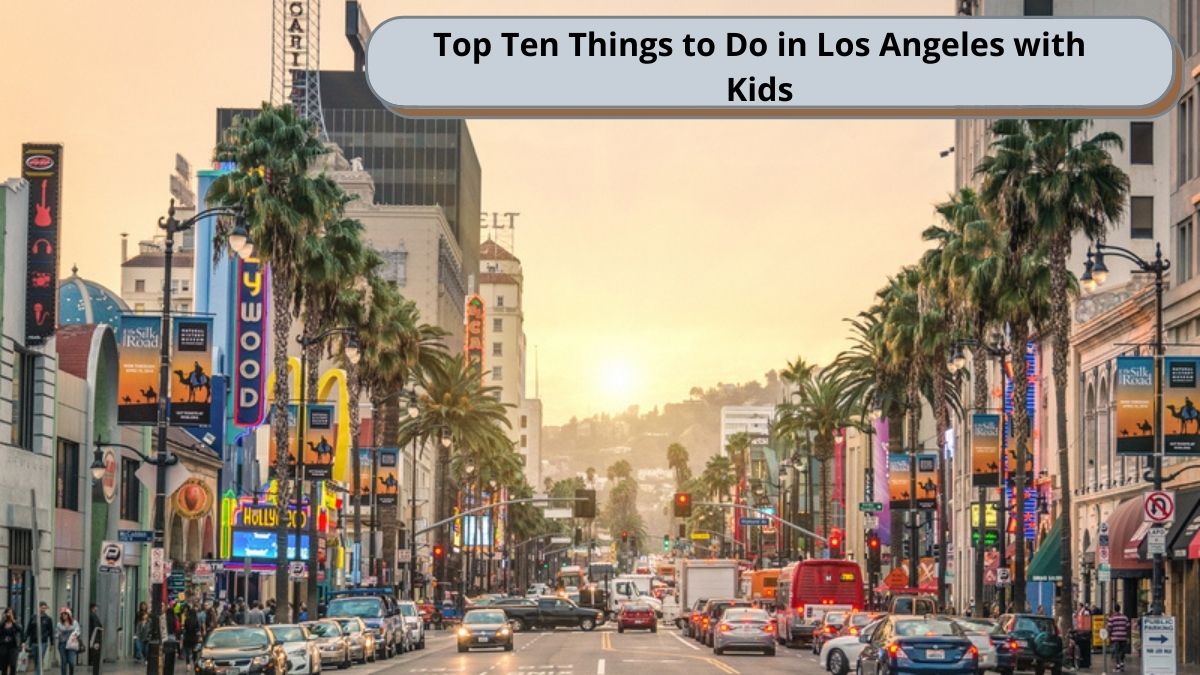 Los Angeles is officially known as the City of Los Angeles and is often abbreviated as LA. It is the largest city located in California and has an estimated population of nearly 4 million. It is also the second-largest city in the United States, after New York City, and the third-largest city in North America, after Mexico City and New York City. Los Angeles is well-known for its Mediterranean climate, ethnic and cultural diversity, Hollywood entertainment industry, and sprawling metropolitan area. Often billed as the “Creative Capital of the World,” many of this city’s residents work in the creative industry, and there are more writers, filmmakers, artists, actors, dancers, and musicians living and working in Los Angeles than in any other city at any other time in history. Furthermore, Los Angeles’s Hollywood neighborhood is popular and recognized as the center of the motion picture industry, and it is also associated as being the center of the television industry. There are 841 museums and art galleries in Los Angeles County and more museums per capita than any other city in the US. Some notable museums are the LACMA, the Getty Center, the Petersen Automotive Museum, the Huntington Library, the Natural History Museum, the Battleship Iowa, and the Museum of Contemporary Art.

Griffith Park, a large municipal park, is located at the eastern end of the Santa Monica Mountains, in the Los Feliz neighbourhood of Los Angeles, California. This park covers more than four thousand acres of land, making it one of the largest urban parks in North America, the second-largest city park in California after Mission after Mission Trails Preserve in San Diego and the 11th-largest municipally-owned park in the United States. Some of the main features or popular attractions in this park are the Los Angeles Zoo, the Autry Museum of the American West, the Griffith Observatory, and the Hollywood Sign. Griffith Park has been shown in many American films that make it amongst the most famous municipal parks in the country. This park has been compared to the Golden Gate Park in San Francisco and Central Park in New York City. These two are other notable American municipal parks, but it is much larger, more untamed, and rugged than either park.

El Capitan Theatre, a fully refurbished movie palace, is located at 6838 Hollywood Boulevard in Hollywood. This theatre and adjacent Hollywood Masonic Temple (now known as the El Capitan Entertainment Centre) is owned by The Walt Disney Company. As a whole, it serves as the venue for a majority of the Walt Disney Studios’ film premieres. El Capitan Theatre is built into a six-story office building built in the 1920s, and the design featured an exterior done in California Churrigueresque style of Spanish Colonial Revival architecture exterior designed by Stiles O. Clements of the architectural firm of Morgan, Walls & Clements,[citation needed] and mixed interior by G. Albert Lansburgh. The interior of this theatre is a lavish East Indian in the main auditorium, English Tudor in the wood-panelled lower lobby, and Italian Baroque on the facade. Furthermore, this refurbished theatre features a large Wurlitzer theatre organ originally installed in San Francisco’s Fox Theatre in 1929. Moreover, small exhibit space is often used to display props from the films, such as costumes or set pieces below the theatre.

Time Travel Mart is part of 826LA, a Los Angeles-based non-profit organization dedicated to supporting students ages 6–18 with creative and expository writing skills. Also, this organization is helping teachers inspire their students to write. 826LA programs are structured around the belief that great leaps in learning can happen with one-on-one attention. Also, those strong writing skills are important to future success. Founded in 2005, 826LA is one of several chapters of 826 National. The Time Travel Mart exists at 826LA and specializes in products imported from the past and future, such as Viking odorant, robot milk, robot toupees, robot emotions, mammoth chunks, and other times travel-themed oddities. This store and its initial products were conceived by writers Jon Korn and Mac Barnett and graphic designer Stefan G Bucher. The store also sells anthologies of new and back issues of Timothy McSweeney’s Quarterly Concern, 826LA writing students, Wholphin, The Believer, and other McSweeney’s publications. The Time Travel Mart also sells a special series of Poketo wallets, celebrating artists and students’ work.

Los Angeles County Museum of Art, commonly known as LACMA, is an art museum on Wilshire Boulevard in the Miracle Mile vicinity of Los Angeles. This museum is on Museum Row, adjacent to the La Brea Tar Pits (George C. Page Museum).LACMA was founded in 1961, splitting from the Los Angeles Museum of History, Science, and Art and forming a museum just for art. LACMA moved to the Wilshire Boulevard complex designed by William Pereira. Since the 1980s, the museum’s wealth and collections grew as it added several buildings beginning in that decade and continuing in subsequent decades. Recently, four buildings on the campus were demolished to make way for a reconstructed facility designed by Peter Zumthor. LACMA is the largest art museum in the western United States and attracts nearly a million visitors annually. Overall, it holds more than 150,000 works covering art history from ancient times to the present. In addition to art exhibits, this museum also features film and concert series.

California Science Center, a state agency and museum, is located in Exposition Park, Los Angeles, next to the Natural History Museum of Los Angeles County and the University of Southern California. Admission into the California Science Center includes access to the permanent exhibits, such as the Space Shuttle Endeavour and other prominent aircraft and spacecraft, and various demonstrations. A separate ticket can be purchase for the IMAX movies, most special travelling exhibitions, and special activities that include a climbing wall, motion simulator, and a high-wire bicycle. This center has been accredited by the American Alliance of Museums and the Association of Zoos and Aquariums and is a member of the Association of Science and Technology Centers. The museum is also an affiliate of the Smithsonian Affiliations program. California Science Center has a variety of ecosystems featuring the two-story, 45,000 square-foot exhibit that displays zones with live animals and aquariums about wildlife and adaptation in different ecosystems, including a river, desert, polar region, deep sea, ocean, island, and urban areas, as well as the entire planet Earth.

The Last Bookstore, a used and new book/record store, is located in California. It began in 2005 in a downtown Los Angeles loft, and that is when owner Josh Spencer took his decade of experience selling everything from cars to clothes online and focused instead on his first love: books. During the revitalization, this bookstore grew to 22,000 sq. ft. space in the Spring Arts Tower at 5th &Spring. The Last Bookstore continues to buy, sell, and trade as it has from day one. Some of its main features include over 250,000 new and used books on two floors, new Arts & Rare Book Annex, shared space with tens of thousands of vinyl records and graphic novels, a huge mezzanine level that includes the Labyrinth above the Last Bookstore, Dave Lovejoy Art, Gather Yarn Shop, Fold Gallery, and the Spring Arts Collective gallery shops. This bookstore has something for everyone and managed to become one of the largest independent bookstores in the world still standing.

CicLAviacatalyzes active transportation, vibrant public spaces, and good health through car-free street events. CicLAvia engages with people to transform their relationships with their communities and with each other. It is a 501(c)(3) non-profit inspired by Bogotá’s weekly ciclovía, and it temporarily closes streets to car traffic and opens them to Angelenos to use as a public park. This non-profit is free for everyone and connects all communities across an expansive city, creating a safe place to bike, walk, skate, roll, and dance through Los Angeles County. Till now, over 1.8 million people have experienced CicLAvia as it is the biggest open street event in the United States. Participants of CicLAvia represent 80% of the population of Los Angeles County. It has created over 226 miles of open streets across Los Angeles County since 2010. CicLAvia has five times more people using its provisional park space during event days than using all of the other parks in Los Angeles combined.

Hollywood Walk of Fame consists of more than 2,690 five-pointed terrazzo and brass stars embedded in the sidewalks along 15 blocks of Hollywood Boulevard and three blocks of Vine Street in Hollywood, California. The stars in the sidewalks are permanent public monuments to achievements in the entertainment industry bearing the names of a mix of musicians, actors, directors, producers, musical and theatrical groups, fictional characters, and others. This location is administered by the Hollywood Chamber of Commerce and maintained by the self-financing Hollywood Historic Trust. Hollywood Walk of Fame is a popular tourist destination, with an estimated 10 million annual visitors in 2010. According to a 2020 report, the Hollywood Walk of Fame comprises more than 2,690 stars spaced at 6-foot (1.8 m) intervals. The name of the honoree is inlaid in brass block letters above each star, and below the inscription, a round inlaid brass emblem indicates the category of the honoree’s contributions.

La Brea Tar Pits are a group of tar pits around which the well-known Hancock Park was formed in urban Los Angeles. Natural asphalt, commonly known as asphaltum, bitumen, pitch, or tar, has seeped up from the ground in this area for tens of thousands of years. This tar is often covered with dust, leaves, or water. Over many centuries, the same tar has preserved the bones of trapped animals. Hence, the George C. Page Museum is devoted to researching the tar pits and exhibiting specimens from the animals that died there. This location is a registered National Natural Landmark of the United States. The lake pit was originally an asphalt mine, and the other noticeable pits were produced because of excavations conducted by explorers in more than 100 sites between 1913 and 1915 in search of large mammal bones. Since then, excavations have gradually been filled in by an accumulation of asphaltum, dust, leaves, and water, but the tar pits they produced remain.