Why Is Cell Communication Important? 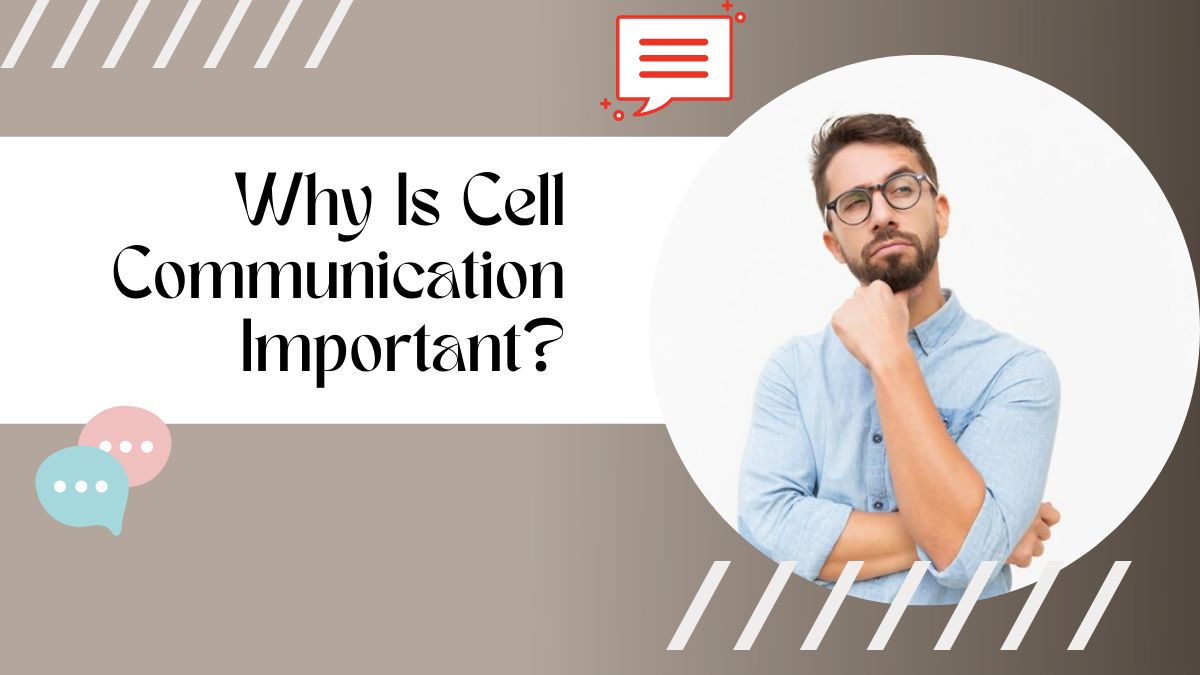 Cell communication is critical to carrying out critical functions, including how tissues can communicate with each other. For example, cell communication explains how the body sends signals through the nervous system to the brain about what’s happening in various parts of the body. Without cell communication, none of these things would work properly.

Cell communication also allows cells and organs within a particular tissue type or location within our bodies to coordinate their activities with each other. This kind of coordination is necessary for tissues to carry out their functions.

1. What Is Cell Communication?

Cell communication is a process through which cells send and receive messages from their neighbors. This process allows cells to coordinate their functions with each other, including how tissues and organs work together as a unit. In addition, cell communication helps individual cells within a particular tissue type or location organize themselves into functional units. Cellular communication occurs through many different avenues. It can be facilitated by neurotransmitters and hormones; it is also done via electrical signals (like action potentials) or chemical signals like autocrine and paracrine signaling molecules.  Communication between cells can relay inhibitory signals (blocking other cells from doing something) or excitatory signals (encouraging a response).

2. What Is Cell Signaling?

Cell signaling is a process by which cells receive and send chemical messages to coordinate their activities with each other, including how tissues and organs work together as a unit. In addition, cell signaling helps individual cells within a particular tissue type or location organize themselves into functional units.

The molecules that carry out cell communication include hormones, neurotransmitters, growth factors, cytokines, and interferons. These molecules can also serve as cellular messengers during cell signaling.

3. How Does Cell Signaling Occur?

The process of cell signaling begins with a stimulus (for instance, injury). Receptors on the surface of the receiving cell bind to the chemical messenger (hormone or neurotransmitter), causing an electrical charge to be generated inside the receiving cells. Once enough receptors have activated inside the cell, this changes other aspects of cellular function, leading to an appropriate response. These proteins interact directly or indirectly through intermediate molecules called second messengers that relay information from one protein component to another inside the cell. For example, when hormone molecules (first messengers) activate receptors on the cell surface, these receptors work by stimulating an enzyme that triggers other chemical reactions inside the receiving cells.

5. How Do Hormones Work as Communicators of Information Between Cells?

6. Importance of Cell Communication in Plants:

Plant cells communicate to coordinate their activities in response to changing light, dark, and temperature circumstances that govern the plant’s development, blooming, and fruiting cycles. Plant cells also talk to one another to coordinate their roots, stems, and leaves. Plant development is also dependent on cell communication. Plasmodesmata are reversible channels that facilitate macromolecular transfer between cells. The plant’s developmental stage and cell proliferation state determine its permeability, structure, and function. Within the plasmodesmata, signaling molecules circulate, and their transport can be disrupted by pathological circumstances such as viral infection. Recent research has discovered dynamic variations in the presence and ultrastructure of plasmodesmata throughout Chara species’ antheridia growth. The link between symplasmic isolation of the antheridium, stimulation of spermatozoid differentiation, and removal of hormone transmission through plasmodesmata has long been known. When plant cells detect environmental stimuli or commence developmental programs, they use mobile transcription factors to relay intercellular signals. Multiple pieces of evidence have accumulated from studies on these unique cell-to-cell signals, indicating that non-cell-autonomous transcription factors play critical roles in the genesis and development of plant organs. Recent research has looked at the evolution of mobile transcription factors and hypothesized mechanisms for their trafficking across plasmodesmata, where a selection system aids the process. Peptides, hormones, and RNAs all contribute to the diversity of the intercellular signaling network, which is also established by mobile transcription factors.

7. Importance of Cell Communication in Organisms:

Cells have evolved complicated mechanisms to communicate with each other. They can live independently in a pond or become part of a larger organism. In multicellular organisms, cells constantly send chemical messages to each other, coordinating actions of distant organs, tissues, and cells. By interpreting these signals, scientists can develop new cures and develop better ways of treating disease. They will help us live longer, healthier lives.

The process of cell communication is crucial for the development of disease-fighting medicines. Understanding the process of cell communication and how it is controlled in the body is crucial for developing new treatments for diseases. This research will also help us understand how to improve our immune systems. The research will also provide evidence that the standard ancestor theory is correct. Despite the many benefits of understanding the process, the research into cell signaling will not help us cure disease. In particular, it helps to establish new treatments for cancer and other diseases. The research on this process will help us understand how bacteria interact with their environment and ultimately lead to new treatments. This research will also help us understand the role of signaling in cancer and other illnesses.

In addition to curing disease, cells must interact with their environment. This is true for single cells growing in a pond, as well as for cells of larger organisms. This communication involves complex processes that can lead to severe illnesses. These include tuberculosis, cholera, and Parkinson’s disease. This is a crucial reason why cell-to-cell communication is essential in our bodies. You can’t imagine life without it.

Ultimately, cells must interact with the environment. Whether they are isolated cells in a pond or are part of a multicellular organism, this communication is essential to their well-being. The ability to communicate between cells can lead to various diseases, and the ability to understand the process may help develop new treatments. Using this method, scientists can better understand the underlying causes of some diseases. This knowledge will also allow them to diagnose better and cure their patients.

9. How Do Hormones Regulate Cellular Communication?

Hormones are particular molecules that relay signals between different cells to coordinate different functions in our bodies. Hormones travel through the bloodstream to reach target tissues, where they bind to receptor proteins embedded within plasma membranes. Upon binding, this interaction changes the shape or charge of the membrane proteins, triggering a cascade of signaling events. These events influence gene expression and control molecular processes such as metabolism, reproduction, stress responses, growth, and development.  For example, the binding of estrogen receptor to its ligand (binding partner) can turn on or off genes involved in breast development.

10. How Do Neurotransmitters Regulate Cellular Communication?

Neurotransmitters like dopamine and serotonin work to facilitate cell signaling by relaying signals between cells. They differ in that they act specifically at synapses or small gaps between nerve cells; the signal is transmitted from one neuron to another. Neurotransmitter molecules are released by transmitting neurons and bind to receptor proteins on the membrane of receiving neurons. When bound, neurotransmitter-receptor pairs trigger changes in ion channels within the membrane, leading to a cascade of signaling events inside the receiving cell, such as releasing second messengers into the cytosol (communicates with other parts of the cell).

Understanding cell communication is essential for all types of life. The ability of cells to send messages is essential for several reasons. In addition to helping cells coordinate their functions, it is the key to cancer research. It provides important clues for the development of new treatments. Because it is so closely controlled, it is vital to avoid errors in the process.

Cells have to communicate with their environment to keep functioning correctly. This means that a cell may be growing alone in a pond or a larger organism. Whether it is an individual cell or part of an organism, cells need to communicate. This is why the ability of cells to exchange chemical signals is essential to every living thing. When it malfunctions, it can cause significant problems.