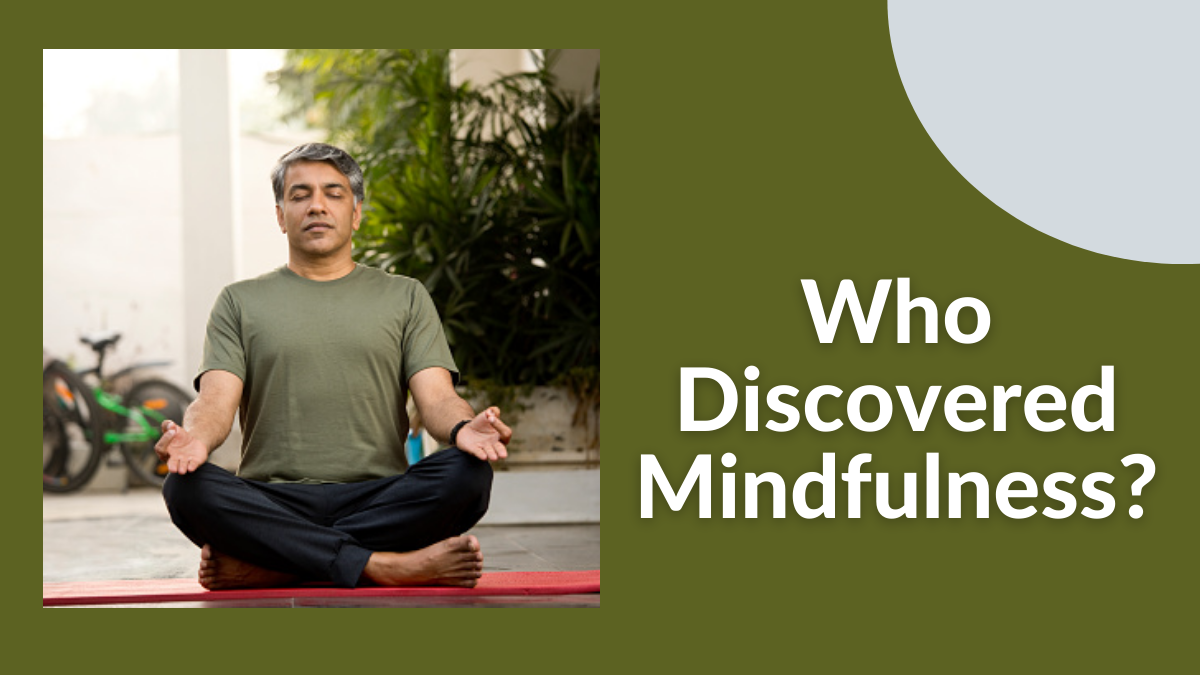 He received additional training from teachers from various Buddhist traditions, as well as the Soto and Rinzai Zen traditions, Chögyam Trungpa’s “Meditation in Action,” Thich Nhat Hanh’s “The Miracle of Mindfulness,” and yogic traditions. Kabat-Zinn secularized historical Buddhist mindfulness principles by detaching them from Buddhist cultural, religious, and ideological factors and orienting them to the “Western mind” and culture, resulting in the development of the first formalized mindfulness-based intervention (MBI), Mindfulness-Based Stress Reduction (MBSR).

How Did Jon Kabat-Zinn Contribute to Mindfulness?

Jon Kabat-Zinn is credited with discovering Mindfulness in the early 1970s when he was still a graduate student at MIT and was an active member of the anti-Vietnam War movement. He agitated with the Black Panthers and French playwright Jean Genet and was injured during a demonstration in Cambridge, Massachusetts. His studies of meditation led to the development of the mindful movement, and today he is one of the world’s foremost experts on the subject.

What Is the History of Mindfulness?

Mindfulness is a practice that is practiced in a variety of religious and secular traditions, ranging from Hinduism and Buddhism to yoga and, more recently, non-religious meditation. Mindfulness has been practiced for thousands of years, either on its own or as part of a larger tradition.

Some commentators argue that the history of Mindfulness should not be limited to Buddhism and Hinduism, as Mindfulness has roots in Judaism, Christianity, and Islam.

This is not intended to be interpreted as a denial of mindfulness’ roots in other religions, and interested readers are encouraged to seek out information about Mindfulness as it relates to these other religions. Leisa Aitken, a clinical psychologist and practicing Christian, offers one possible starting point, but she is only one of many.

Hinduism is widely regarded as the world’s oldest extant religion, but its origins are obscure. This is due to the fact that it arose as a synthesis of many religious traditions from the historical region that is now India.

In other words, Hinduism does not have a single founder or a specific starting point. In fact, the religious tradition was not even called Hinduism or considered a distinct entity until the 1800s, when British writers began referring to Vedic traditions as “Hinduism.”

The earliest traditions, which have since been incorporated into Hinduism, emerged more than 4,000 years ago in the Indus Valley, which is now Pakistan. These religious traditions were preserved in Vedic writings between 2,500 and 3,500 years ago. These writings contained rituals and god worship that are common in modern-day Hinduism.

Additional texts, such as those introducing the concepts of dharma and temple worship, were written between 1,500 and 2,500 years ago and are still used in modern Hinduism.

With the rise of Islam a few hundred years ago, Hinduism faced some competition in India, but 19th-century reformers revitalized Hinduism and helped tie it to India’s national identity. This was successful because, around the mid-nineteenth century, middle-class Indians began to identify with Hinduism (Hatcher, 2007). This link was then cemented about a century later with the Indian independence movement.

Buddhists could join a Mahayana, the term used to refer to Buddhist schools, by 100 BCE. These learning communities began in India and Kashmir3 and then spread throughout Asia.

What we now call Mindfulness was practiced and taught in these schools by great minds, many of whom we have no records of today. Trained Buddhists eventually left Asia, traveled abroad, and began teaching Mindfulness in new parts of the world. As a result, the history of the mindful movement began to shift from East to West.

Mindfulness Is Spreading From East to West.

As more Buddhists from the East shared their teachings with the rest of the world, the message of Mindfulness began to spread, particularly in the Western world. One of these individuals was Jon Kabat-Zinn, known as the “Father of Mindfulness.”

When a Zen Buddhist teacher and missionary gave a lecture, Jon Kabat-Zinn was working on his Ph.D. in Molecular Biology at MIT. Philip Kapleau was this teacher, and he practiced and taught his own unique style of Japanese Zen tradition. This was the source of Jon’s motivation to investigate mindfulness2[2]. He went on to study meditation with Thch Nat Huh, Sunglasses, and other well-known teachers.

Kabat-Zinn had 13 years of meditation practice under his belt by 1979. He also did post-doctoral research in cell biology and anatomy. He decided to go on a 2-week meditation retreat around this time. According to one report, attendees at this retreat had to practice in the cold until 3 a.m., “suffering the all-consuming discomfort of sitting cross-legged and motionless for hours and days.”

During this two-week retreat, Jon Kabat-Zinn discovered his “karmic assignment” in life. When speaking with Psychotherapy Networker, he stated:

“It was on the 10th day or something, and after all of those years meditating on what my job on the planet was, I suddenly thought, ‘Oh my God, I could bring all this stuff—meditation, mindfulness, yoga—into the hospital!'”

Kabat-Zinn began to imagine all of the different ways meditation could be used to help people suffering from chronic pain and other life-altering health issues. Kabat-Zinn, on the other hand, had a problem.

It was the 1970s, and the western world did not have nearly as much information on meditation practices as it does today. Most people were unfamiliar with terms like vinyasa and Vipassana. He also attempted to introduce these spiritual practices into hospitals. At the time, it was managed by people who would throw out anything that was not supported by empirical evidence.

With this problem in mind, Kabat-Zinn attempted to convey his answer in a scientific manner that would be more appealing to his intended audience. At the University of Massachusetts Medical School, he established the Mindfulness-Based Stress Reduction Clinic (MBSR).

He also avoided using language that could be interpreted as Buddhist practices. Americans considered other Americans who embraced Buddhism as ‘hippies’ and ‘new-agers’ who were defying their culture in the 1970s. Kabat-Zinn did not want cultural obstacles to prevent individuals from learning about MBSR and reaping the advantages of its practices. According to Kabat-Zinn:

“I strained over backward to arrange it and find methods to speak about it that minimized the chance of it being perceived as Buddhist, New Age, Eastern mysticism, or simply flaky.”

What Were the Claims of the Early Practitioners?

Early practitioners frequently claimed that it was a Japanese Buddhist practice that originated in India. Westerners, on the other hand, tailored Eastern traditions to their own culture and audience. As a result, the worldviews of the two halves differ. “Eight-week CBT courses, one for each hemisphere of the Earth, are radically different,” says Devout Patagonian, a psychiatrist in Toronto.

Who Introduced Mindfulness in the UK?

Mark Williams, a psychologist, was the first to promote Mindfulness in the United Kingdom. He and colleagues in Toronto and Cambridge created a new mindfulness program in 2001 by combining a US curriculum with cognitive behavioral therapy. An eight-week treatment based on this curriculum was prescribed for persons suffering from depression in 2004. Ruby Wax, an Oxford University student who sought treatment for depression, enrolled in a mindfulness course in the United States. San New World, her book, popularized the technique.

Jon Kabat-Zinn, a professor at Oxford University, is credited with shepherding Mindfulness into the mainstream. In 1979, he introduced his course, known as “Mindfulness-Based Stress Reduction” (MBSR), which is an eight-week course that helps people deal with stress. The study has demonstrated that MBSR significantly reduces the risk of neurodegenerative diseases such as Alzheimer’s, Parkinson’s disease, and depression.

After MSBR was created, the mindful movement’s more recent past involved instructing teachers. Kabat-Zinn might teach Mindfulness while researching and gathering evidence to persuade more people. Mindfulness meditation, body scanning, and yoga postures are among the fundamental skills taught at MSBR. The training lasts eight weeks.

How Have People in Different Countries Learned the Mindfulness Language?

The British Empire and Victorian Orientalism were at their height in the late nineteenth century, and a judge at Ceylon’s university was studying the Middle Indo-Aryan language Pali. Theravada Buddhism was an early form of Buddhism, and the British judge had studied it. Davids’ attempts to grasp Buddhist culture and language were rewarded in 1530 when he translated the word “mindfulness” into English. While he had to translate it from the English language, he was a major voice in the discovery of Mindfulness.

How Have Different Religions Adapted Mindfulness?

People of various religions have embraced Mindfulness and adapted it to their own beliefs throughout history. There are numerous more religions that emphasize Mindfulness in addition to Buddhism. Hinduism, for example, is the world’s oldest religion. In India, it was a fusion of many diverse religious traditions. As a result, it lacks a single founder and a distinct starting point. In contrast, Christianity has embraced meditation, and some experts think that it may be a valuable tool for assisting individuals in overcoming their daily challenges.

How Is Mindfulness Being Used?

Mindfulness is becoming increasingly popular among individuals from all areas of life. It is now utilized in schools, the workplace, and by celebrities, including Hollywood celebrities. Indeed, it has permeated ordinary life, from schoolchildren to doctors. The concept of Mindfulness can be traced back to the early days of Buddha. It has gotten so popular in the United States that it is now widely used. It has also been developed and widely used to treat a wide range of clinical disorders.

What Are the Benefits of Mindfulness?

In recent years, psychotherapists have embraced mindfulness meditation as an important component in the treatment of a variety of issues, including depression, substance misuse, eating disorders, couples’ conflicts, anxiety disorders, and obsessive-compulsive disorder.

In Conclusion, We can connect the global adoption of Mindfulness to a variety of factors, including spirituality, health, the desire for meaning, enlightenment, and so on. The mindful movement is growing because people are seeing success in their personal goals as a result of the practice.

For many people in the Eastern culture, where Mindfulness started, the practice is a way of life. The rest of the world is still catching up, as it will take time for Mindfulness to become ingrained in our culture. The mindful movement has only grown in popularity since Jon Kabat-Zinn created the phrase. Today, we anticipate that it will sustain its current momentum for the foreseeable future.