Which of the Following Wireless Communication Technologies Can Be Described by Its Characteristics? 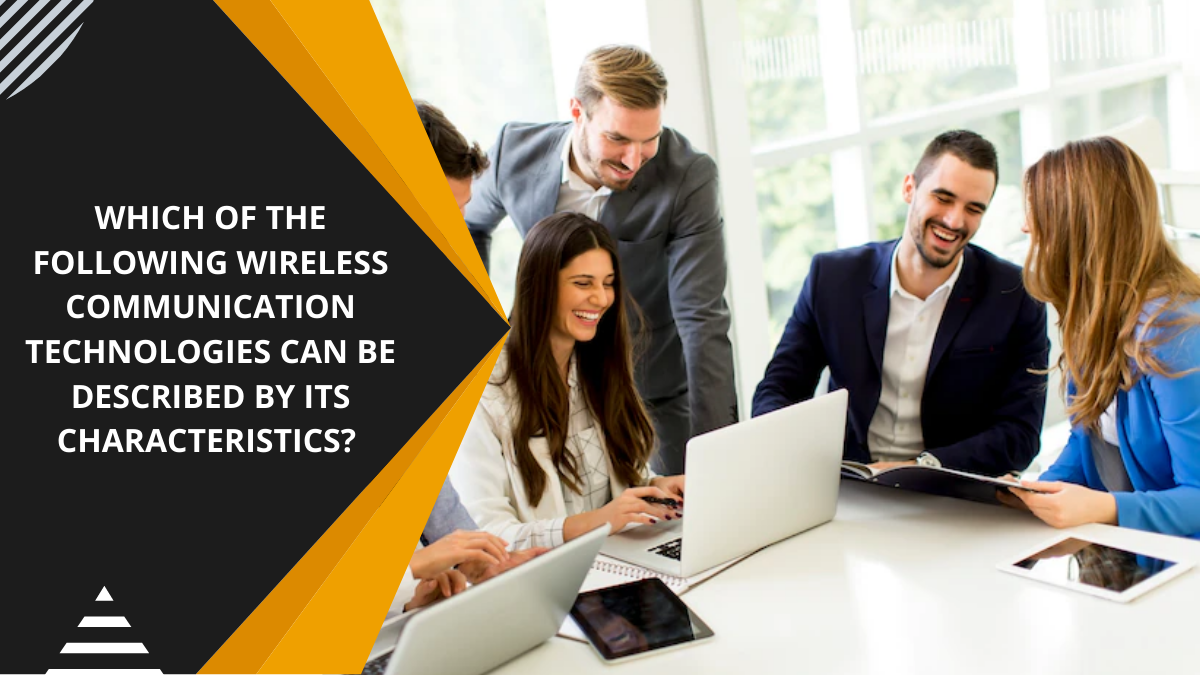 Wireless and telecommunication have been inextricably linked in the modern era to provide wireless communication to the common man, allowing individuals in any region of the world to converse easily. Wireless communication technology uses electromagnetic waves such as infrared, radiofrequency, satellite, and others to communicate data over the air. GPS, Wi-Fi, satellite television, wireless computer parts, wireless phones with 3G and 4G networks, and Bluetooth are just a few examples.

The majority of today’s telecommunication is wireless. It entails the transfer of data over a short distance or across the world without the need for wires, cables, or any other electrical conductors. Because of the numerous commercial benefits, wireless communications are reaching new heights. Wireless technology provides network efficiency, flexibility, and speed.

Introduction to Wireless and Telecommunication

It has evolved into a valuable tool for the tech-savvy age because it allows for easy information sharing and increases productivity. One has the ability to go wherever one chooses without worrying about losing their internet connection.

What Are Some Disadvantages of Wireless Communication?

Wireless communication has its own disadvantages as its advantages. It leads to security threats and data exploitation if not secured appropriately. An unauthorized person can easily capture wireless signals that spread through the air and misuse information that is transmitted over the wireless network.

To secure wireless signals like WPA and WPA2, one must use strong security protocols. Alternatively, you can also use a wireless intrusion prevention system to secure the wireless network.

Which of the Following Wireless Communication Technologies Can Be Described By Their Characteristics?

These technologies are used in various situations and have different characteristics. One of the main differences between them is the range they can cover. The farther a signal can travel, the more powerful it is. But it’s important to note that these technologies must be used at both ends of the connection to ensure the highest possible range and data rate.

Wireless networking is the process of connecting wireless devices. It is widely used in home networks, telecommunications networks, and business installations. This type of network is often associated with a transmission distance limitation. Some of these networks are a combination of different wireless communication technologies. Which one best suits your needs? Which of the following technologies can best describe its strengths? Its most common advantage is that it’s flexible and scalable.

Wireless local area network (WLAN) is a popular form of wireless networking. It allows users to access a local area network and the internet through a single connection. The speed of this technology is much faster than what is available with consumer Internet access. WLAN technology is replacing many of the older, less popular systems like DECT and HIPERLAN. These systems are mostly local and don’t support seamless network migration.

Wired and wireless networking are two different types of wireless networks. The first type is used to connect a large number of devices. The latter is often referred to as “wireless networking.” The last type uses an Ethernet cable to transmit data. This type of network can be viewed as a network of wireless devices. In addition to telecommunications networks, it’s also used for home and business installation.

What Are Some Few Tips to Secure Wireless Network?

Keep your wireless network safe by putting in place a set of policies and identifying who is responsible for them. When new hazards are found, review these policies on a regular basis to ensure security control.

Administrators can employ discovery tools to detect rogue access points and unauthorized peer-to-peer connections, as well as assess vulnerabilities. Strong passwords should be used to protect the administration interface of your wireless router or access point.

SSID (Service Set Identifier) is disabled – When you disable SSID, your network becomes invisible to your neighbors and passers-by. This will prevent illegal access to your network.

Secure your network with VPN – VPN allows employees to connect to the business private network in a secure wireless network environment. Data is encrypted and protected in this network from unauthorized access, including eavesdropping and man-in-the-middle assaults.

What Are Some Types of Wireless Data Transmission?

One sort of wireless data transmission is the radio system, which is a wireless medium that transmits data by transmitting low-frequency electromagnetic waves to distant locations via an electrical conductor and an antenna. With their strong amateur broadcasting equipment, ham radio enthusiasts share information and serve as emergency communication assistance during disasters, and can even send digital data over the radio spectrum. The wavelength, transmitter strength, receiver quality, antenna type, size, and height all affect radio communication.

Infrared radiations have longer wavelengths than visible light and are therefore more powerful. Typically, these are used for short-range communication.

Infrared is a data transmission technique that uses light-emitting diodes or lasers to send data signals. Infrared energy is electromagnetic energy with a wavelength longer than red light. In an infrared system, information cannot pass past obstructions, but it may be blocked by light. The point-to-point system, in which transmission is possible between two points separated by a range and line of sight, is one type of infrared.

In a point-to-point system, the signal frequency varies from 100 GHz to 1,000 terahertz (THz), with speeds ranging from 100 Kbps to 16 Mbps. The broadcast system is another technique of infrared communication.

In wireless communication systems, microwaves are a type of electromagnetic transmission. Microwaves have wavelengths ranging from one meter to one millimeter. The frequency ranges between 300 MHz and 300 GHz. These are popular for long-distance communications since they are less expensive. Microwave is a sort of wireless data transmission that uses two different methods to deliver data. The satellite technique, which transmits information via a satellite orbiting 22,300 miles above the Earth, is one method for transmitting data using the wireless media of a microwave. Ground stations transmit and receive data signals to and from the satellite in frequencies ranging from 11 GHz to 14 GHz, with a transmission rate of 1 10 Mbps.

Although cordless phones have a limited range, mobile phones often have a considerably greater range than local wireless networks since they rely on big telecommunication towers for coverage. Similar to Global Positioning System (GPS) equipment, some phones use satellite signals to connect.

A wireless repeater is a wireless networking device that extends a wireless router’s range. A repeater receives wireless signals, enhances their power, and then sends them out again. Placing a repeater between the router and the PC connected to the router can improve the signal’s strength.

What Is the Significance of Wireless Communication?

The utilization of connection wires is required for wired communication. Communication through wireless networks does not necessitate a complex physical infrastructure or routine maintenance. As a result, the cost is lowered.

For example, a company that provides wireless communication services does not incur a lot of expenses, thus it may offer low consumer rates.

People can communicate regardless of their location thanks to wireless communication. To send and receive messages, you do not need to be in an office or a telephone booth. Miners in the outback can use satellite phones to communicate with loved ones, improving their overall well-being by keeping them in touch with those who matter most to them.

Wireless communication technologies, such as cellphones, are relatively simple to use and may thus be used by anyone, regardless of location. To receive or send messages, there is no need to physically connect anything. Wireless communications services, for example, can be found in Internet technologies like Wi-Fi. We can now connect with practically anyone, anywhere, at any time, because network connections are no longer a hindrance.

Improvements in speed can also be noted. The accuracy and speed of network connectivity and accessibility were greatly improved. A wireless remote, for example, can run a system faster than a cable one. If something goes wrong with a machine, wireless control can easily stop it from working, whereas direct control couldn’t.

The advancement of wireless technology has resulted in numerous breakthroughs due to its useful qualities. The transmission distance can range from a few meters (for example, the remote control on television) to thousands of kilometers (for example, radio communication). Cellular telephony, wireless internet access, wireless home networking, and other applications can all benefit from wireless communication.

Wireless communication eliminates the cost of establishing wires, cables, and other infrastructure, lowering the overall cost of the system when compared to wired communication. Installing a wired network in a building, digging into the ground to lay cables, and connecting those wires over streets is a complex, expensive, and time-consuming task.