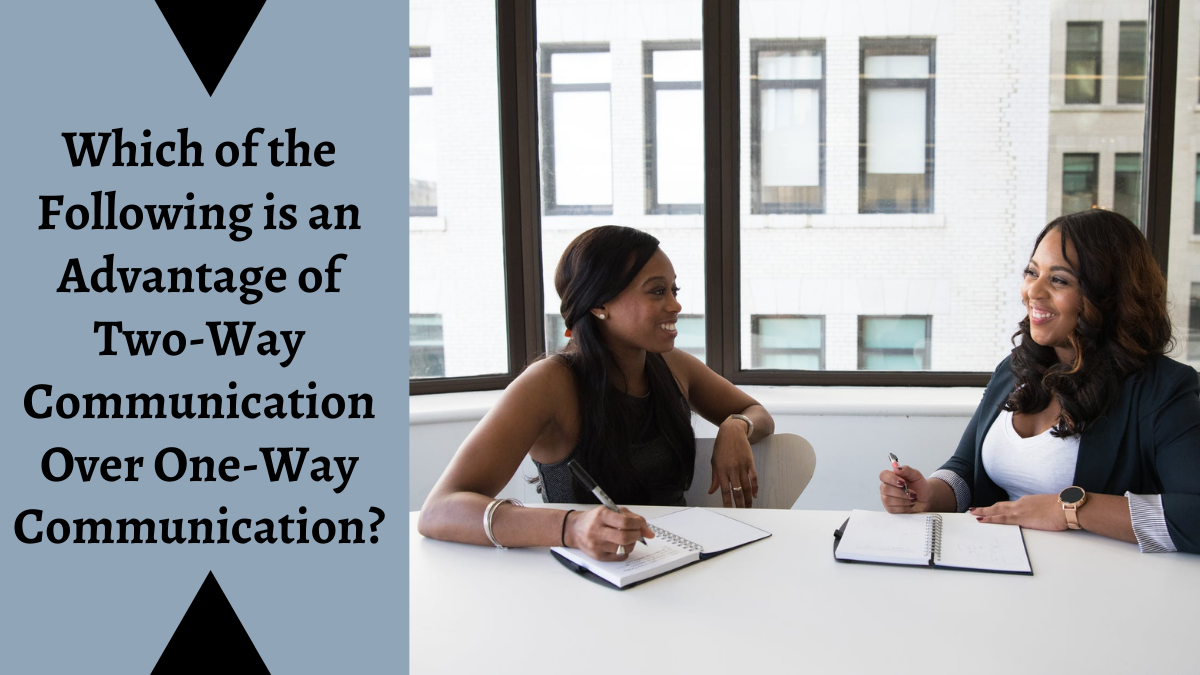 What Is Two-Way Communication and How Does It Work?

‘Are you able to hear me now? ‘How about right now?’ Who can forget the famous commercial for wireless phone service in which the poor signal tester wanders the countryside in search of feedback? His endeavor to engage in a two-way conversation with the person on the other end is reflected in his demand for a response to his message.

Let’s have a look at a simple two-way communication paradigm:

When one person is the sender and sends a message to another person who is the receiver, this is known as two-way communication. When the recipient receives the message, they respond with an acknowledgment that it was received. In the business world, two-way communication is critical. Employers, employees, consumers, and other stakeholders provide messages, and feedback is essential to ensure that the message is received and comprehended.

Many businesses and government agencies rely on two-way communication technologies to keep in touch with their workers. Radio, telephone, and computer-aided dispatch systems used by police, fire, and emergency response personnel are all examples of two-way communication systems. Dispatchers and supervisors can use these systems to communicate with individuals and organize the activity of groups of responders. Construction and building trades, public transportation, the trucking sector, and flying by commercial and non-commercial pilots, to name a few, all use two-way communications systems.

The sophistication and particular characteristics of two-way communication systems vary widely. They range from simple handheld two-way transceivers with a single dedicated channel to more complicated systems with many channels shared by many users. The type of system chosen is determined by various parameters, including the intended use, location, number of users, frequency band, and system cost. Regardless of the chosen system type, all components must be interoperable and operate together to achieve a similar goal.

Messages and feedback can be conveyed rapidly using instant messaging. It helps users know when the other person receives the message or is online. It is now a standard feature of several social media platforms.

Instant messages are sent to groups of people in chat rooms. These are open-access rooms with no restrictions on who can enter, and everyone can send a message or provide feedback; thus, contact is unrestricted.

There may be a distinction between how phones are developed now and how they were designed in the past. However, their goal has remained the same. It’s simple to establish excellent two-way communication and contact someone who lives far away when you use the telephone.

The most successful approach to delivering messages and obtaining feedback is through in-person engagement or conversation, which helps to create opportunities and long-term solid links.

What Is One-Way Communication and How Does It Work?

In one-way communication, information is only sent from the sender to the receiver in one direction. There is no way for the recipient to provide feedback to the sender.

“This morning, Bob is leaving for a weekend business trip out of town. For the executive board meeting next week, he wants his secretary to place an order for lunch. Bob scribbles a message for his secretary and leaves it on her desk as he walks out the door”.

The following is an example of a one-way communication model:

When the sender intends to deliver accurate information, convince or manipulate their audience, or win their cooperation, one-way communication is frequently used.

Julie is getting ready to depart for class at 6:00 a.m. She turns on the TV just in time to see the weather forecast. She’s delighted to learn that the day will be colder, allowing her to wear the new sweater she bought last summer finally. Julie retrieves the sweater from the dresser and removes the tag with the washing instructions, stating that it should be hand-washed in cold water and dried flat. Julie gets dressed and heads to the kitchen. She reads the labels on the cereal boxes and chooses the one with the fewest calories. She then takes a seat at the table with the newspaper. She’ll have barely enough time to eat and peruse the headlines before class. She is determined not to be late. Dr. Sam’s lecture on Tennessee fainting goats is something she’s looking forward to. Julie puts her favorite CD in the car’s player on the way to campus. When she discovers a billboard on the side of the road, she’s singing along and not paying attention to her speed. It’s a public service announcement reminding drivers to buckle up and slow down. Oops! Julie eases off the throttle pedal and drives at a comfortable speed for the remainder of the journey. Consider Julie’s morning for a moment. Are there any examples of one-way communication that you can think of?

How did it go for you? Did you manage to find them all? Consider how this form of communication might be used in the workplace.

Which Is Preferable: One-Way or Two-Way Communication?

Only if the receiver responds to the sender does a proper communication process exist. Two-way communication happens when this exchange occurs. When a person sends a message to another and receives no response from the recipient, such as when a person gives instructions or directions through a memo or e-mail, this is known as one-way communication.

Why Is It Better to Communicate in Two Ways?

We must process both verbal and nonverbal information flows simultaneously to have successful two-way communication skills.

The Full-Duplex Mode and How Senders Should React

The term “duplex” comes from communication technology, and it means that you are transmitting and receiving data simultaneously as a sender. When speaking, your goal as a speaker should be to pay attention to both the receiver’s words and nonverbal signs. We do this to extract more meaning from one other’s nonverbals.

For example, you can determine whether or not the other person understands you by doing so. Would you understand what I meant if I said, “Meet me at the Hollis?” The vast majority of us would answer no. As a sender with excellent interpersonal communication skills, you would pay attention to nonverbal cues and recognize that the other person was perplexed by the word “Hollis,” and then take measures to clarify. You have an advantage over people who cannot read faces if you can.

Active Listening — How Should Recipients React?

Being actively involved in a conversation implies actively listening. Nodding, making eye contact, and, most crucially, asking questions are all ways to demonstrate active interest.

Mediums That Can Be Used for Two-Way Communication

Because visual nonverbal feedback is missing during a telephone conversation between two persons, it has a significant disadvantage. Due to cameras on computers and mobile phones, this constraint is unlikely to be a problem.

For two-way communication, this is the gold standard. If you need to have a sensitive chat, face-to-face is the way.

There are various circumstances in the workplace where practicing interpersonal skills is beneficial.

It is much more probable that you will answer the question in a way that the interviewer feels makes sense if you can extract information from the interviewer’s face and movements.

Conversations with the Boss

When coaching or counseling, these strategies are beneficial when learning new abilities, it’s critical to keep an eye on the nonverbal cues for signs of perplexity.

When a person self-talks, they are essentially conversing with themselves. It’s a particularly sneaky sickness that primarily affects the intelligentsia, such as professors and innovators like engineers. Don’t forget about the doctors, too.

Another reason is that meaning is not always conveyed entirely through language. There’s a lot of it. The situational context and nonverbal factors linked with the body express a tremendous deal of meaning. Let’s pretend you’re having your first meeting with someone. As you enter the conference room, you realize that the person at the head of the table has been chosen. In contrast, another individual may select a chair at the table’s side and suggest that you should converse with them from that location. You should see that one person is expressing an equal conversation while the other establishes a situation in which they want to be the dominating participant.

If you can’t process both nonverbal and verbal messages simultaneously, you won’t be a strong communicator. However, if you have been disregarding nonverbal information for years, reading an essay like this one is unlikely to make you change your mind. Because it’s challenging to transform something wrong for hundreds of hours into the right, to summarise, if we remove two-way communication from an organization, we will have a dead entity that is useless and worthless. One of the most significant flaws with one-way communication is that speakers, or in this case, employers, speak and never listen. It also suggests that employees listen without speaking or responding. Since communication is the backbone of an organization’s performance, two-way communication takes center stage. It is the highest priority in an organization in the corporate business world in resolving difficulties and sustaining a solid mutual employee relationship.