What is Trump University? 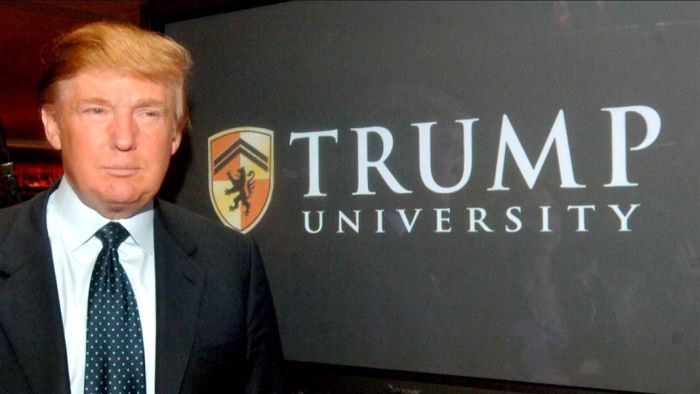 Trump University was a for-profit education company, also known as the Trump Wealth Institute or the Trump Entrepreneur Initiative LLC that ran a real estate training program. It was operated and run by the Trump Organization, and it ran from 2005 to 2010.

Many lawsuits were filed against it, so it’s now defunct. Founded by Donald Trump and two associates, it offered courses in real estate, entrepreneurship, asset management, and wealth creation.

It wasn’t credited as a university or college, or did it provide college credit, degrees or grade its students. It was the target of an inquiry by the New York Attorney General’s office in 2011 due to being involved in illegal business practices, ending in a lawsuit in 2013.

It has also been on the receiving end of two class action lawsuits in federal court. The alleged that Trump University was engaging in fraudulent practices with its students through misleading marketing strategies and aggressive sales techniques.

The lawsuits and other problems it had, came to light again in 2016 thanks to Donald Trump’s presidential campaign. In the end, Trump settled all three lawsuits in 2016 after winning the election, despite his claims that he wouldn’t accept a settlement agreement.

Trump University came about after Michael Sexton created a business plan aimed at training people in the real estate field and presented it to Donald Trump for the use of his name, offering a flat rate fee. But Trump decided then that he wanted to be the main owner of the company.

In 2004 Trump University was incorporated as a New York limited liability company by Sexton, Trump, and Spitalny. 93% of the company was owned by Donald Trump and in May 2005 it officially launched its education program.

Originally the company as going to focus on online courses, but it quickly included live, in-person instruction too. The main objective of the company was real estate investment.

The lawsuits that were filed against Trump University claimed that it was engaging in several illegal activities, including racketeering. Two of those lawsuits were class-action; one against the company and one against Trump himself. A third lawsuit was filed in New York State court.

In 2005 the New York State Department of Education sent them a letter warning them of a state law violation for using the word “university”, when in fact they weren’t a chartered one and didn’t have the license required to offer live training or instruction. In June 2010 Trump University changed its name to The Trump Entrepreneur Initiative.

In 2013, the State of New York filed a $40 million civil suit for illegal business practices and false claims. It described Trump University as a bait-and-switch scheme and he accused Trump of misleading over 5,000 people into paying thousands of dollars, as much as $35,000 to learn his real estate investment tactics.

Trump was found personally liable for not having the necessary business license while operating the company in 2014 by a New York judge.

These are not the only investigations and lawsuits Trump University has had to deal with in the last decade. States like Texas, California, Florida, and Washington have also filed complaints against the company and Donald Trump personally as a director of Trump University.