What is Meant by the Term Second Messenger in Endocrine Communication? 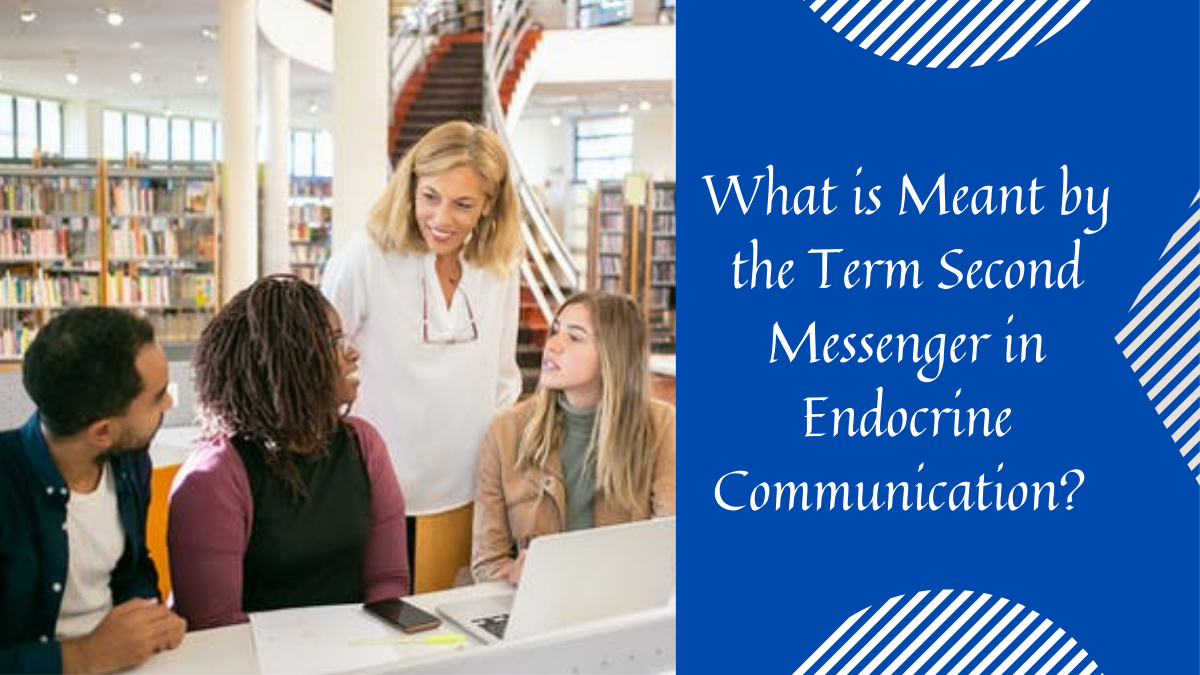 A second messenger is a molecule produced by the endocrine system, which affects the physiology of target cells. It is produced by the effects of hormones on target cells. This chemical influences the physiology of target cells through various mechanisms, including the stimulation of calcium channels and calmodulin interactions. The endocrine system is particularly effective at regulating the body’s response patterns.
The messengers are primarily involved in relaying signals from receptors on cell membranes to effector proteins within the cell. They include a broad range of chemical species and signals in the cytosol, between the membrane and the cytosol. These molecules are found in low concentrations in resting cells but are amplified during signaling. The action of the second messengers is complex, involving a complex network of pathways and cellular structures.

What Is Endocrine System?

The endocrine system is in charge of how our bodies work. The neurological system is no exception. Both systems function in quite different ways and interact with one another. The neuroendocrine system is a term that refers to both systems working together. Hormones are chemical messengers that are released into the bloodstream and conveyed throughout the body to their destinations. An electrical signal from the neurological system activates muscles and glands (an action potential). The endocrine system’s hormones have an effect on the metabolism of their target cells. Endocrine control reactions are normally slower but last longer than nerve control responses.
Ductless glands are endocrine glands. Their hormones are released straight into the bloodstream.

What is the Term Second Messenger in Endocrine System Mean?

Second, messengers, which are released into the cytosol as a result of receptor activation and activate a wide range of intracellular enzymes, ion channels, and transporters, are the primary distributors of an external signal.
DAG, PIP3, arachidonic acid, phosphatidic acid, and lysophosphatidylcholine are only a few of the lipid second messengers that activate one or more of the 10 PKC isozymes expressed by vertebrate cells (Fig. 26.6). These distinct PKC isozymes respond to specific lipid second messengers in a selective manner. Ca2+ is required for the activation of some PKC isozymes, but not all. Some PKC isozymes may be inhibited by sphingosine.
By dissociating an intramolecular pseudosubstrate sequence from the active site, lipid second messengers activate PKC. Instead of the serine found in substrates, pseudosubstrates have alanine at the phosphorylation location.

What is the Significance of Second Messenger?

Second messengers are tiny intracellular molecules that are created after a receptor is activated by a first messenger (hormone or neurotransmitter). Second, messengers are designed to trigger intracellular signaling pathways that amplify the signal and lead to the activation or inhibition of transcription factors, resulting in a physiological response.
The second messenger comes in a variety of chemical forms, including cyclic nucleotides, lipid derivatives, tiny active molecules, and ions. The cyclic 3′5′-adenosine monophosphate is the most studied second messenger (AMP). Calcium, DAG, IP3, and reactive oxygen and nitrogen species, as well as cyclic guanosine monophosphate (GMP) (ROS, NOS)
Generally, the signaling pathways involving second messengers have more specificity and are less reliant on specificity than neural signals. For example, a hormone, such as oxytocin, may function in a variety of physiological processes, including labor and breastfeeding. Another example of a second messenger is a chemical called dopamine, which promotes uterine contractions and is involved in sexual responses in both sexes.

In endocrine communication, a hormone can be a second messenger. A secondary messenger is produced when the receptor binds to a hormone. These substances are carried around the body and affect a number of physiological activities. They are released into the bloodstream and can affect a wide variety of targets. Depending on the receptor, a second messenger may be released into the bloodstream.

What Does the Second Messenger Do?

What is the Role of Second Messenger?

The term second messenger refers to a molecule that relays signals from a cell receptor to its target. The term second messenger is a general term for a peptide with two acyl chains. In contrast, a lipid with one acyl chain can be dissociated from the membrane. Both fatty acids are used as second messengers, and both can have multiple targets.
The second messenger is a type of peptide released from the endocrine gland. This molecule activates target cells in response to an extracellular signal. It is called a first messenger. It is released in response to a specific receptor on the cell surface. The receptors in the cell then transmit the signal to the targeted cell. The resulting signals are then transmitted to other targets.

Consider what might happen if you come across a burning building late at night. You’d probably dial 911 or another emergency number. To report a fire, you would dial 911, and the operator would contact and “activate” a number of firefighters. Firefighters would hurry to the site, dousing the flames with water and creating barriers, among other things. Other “players,” such as cops and fire investigators, would almost certainly be called in later to figure out what sparked the fire. Importantly, firemen return to the station and sleep once the fire has been doused (or the structure has been entirely destroyed).
A community’s response to a fire is akin, at least in some aspects, to a second messenger system involved in the action of a hormone. You are the “first messenger,” the dispatcher is the “receptor,” and the firefighters are the “second messengers” in the scenario depicted.
In cells, four-second messenger systems are now recognized, as shown in the table below. It’s important to remember that not only do multiple hormones use the same second messenger system, but a single hormone might use multiple systems. It’s still a mystery how cells combine messages from multiple hormones into a cohesive biological response.

What Are the Three Classes of Second Messenger?

Second, messengers are molecules that relay signals received at cell surface receptors to target molecules in the cytosol and/or nucleus, such as the arrival of protein hormones, growth factors, and so on. Second messengers, in addition to serving as relay molecules, also function to dramatically boost the signal’s power. The binding of a ligand to a single receptor on the cell surface has the potential to cause enormous alterations in the cell’s metabolic activity. Second messengers are divided into three categories:
Calcium ions (Ca2+)
cyclic nucleotides (e.g., cAMP and cGMP) inositol trisphosphate (IP3) and
diacylglycerol (DAG)

G protein-coupled receptors (GPCRs) attach to peptide and protein hormones like vasopressin, thyroid-stimulating hormone (TSH), and angiotensin, as well as neurotransmitters like GABA, to activate the intracellular enzyme phospholipase C. (PLC).
It hydrolyzes phospholipids, specifically phosphatidylinositol-4,5-bisphosphate (PIP2), present in the inner layer of the plasma membrane, as its name suggests. PIP2 hydrolysis produces two products:
DAG (diacylglycerol) is found in the plasma membrane’s inner layer. Protein Kinase C (PKC) is a calcium-dependent kinase that phosphorylates numerous other proteins in the cell, causing it to alter. Calcium ions are required for PKC activation, as the name implies. The activity of the other second messenger — IP3 — makes these available.

Exocytosis of muscle contractions, such as the release of neurotransmitters at synapses (which is required for the long-term synaptic changes that result in Long-Term Potentiation (LTP) and Long-Term Depression (LTD); secretion of hormones such as insulin; and activation of T and B cells when they bind antigen to their antigen receptors (TCRs and BCRs respectively)
Cell adherence to the extracellular matrix (ECM)
Protein Kinase C mediates a number of biochemical changes during apoptosis (PKC).
Ions of Ca2+ are returned. Two Na+/Ca2+ exchangers; active transfer to the ECF via an ATP-driven pump called a Ca2+ ATPase. These antiport pumps use the energy of three Na+ ions flowing down their concentration gradient to pump one Ca2+ ion against it and four Na+ ions flowing down to pump one Ca2+ and one K+ ion up their concentration gradients. Another Ca2+ ATPase transports Ca2+ to the endoplasmic (and sarcoplasmic) reticulum.

Second messenger cascades are transient events that are required for normal cell activity. Several malignancies have been linked to receptors that constantly excite second messenger systems. Internalization of cell surface receptors is a crucial aspect of negative control of hormone function. Hormone binding stimulates internalization in several circumstances.
Endocytosis takes place through coated pits, which allow for internalization. Endosomes (also known as “receptosomes”) formed as a result of this process may fuse with lysosomes, causing the receptor and hormone to be destroyed. In other circumstances, the hormone appears to separate, and the receptor is recycled by the endosome fusing back into the plasma membrane.