What Is Chomsky’s Theory on Language? 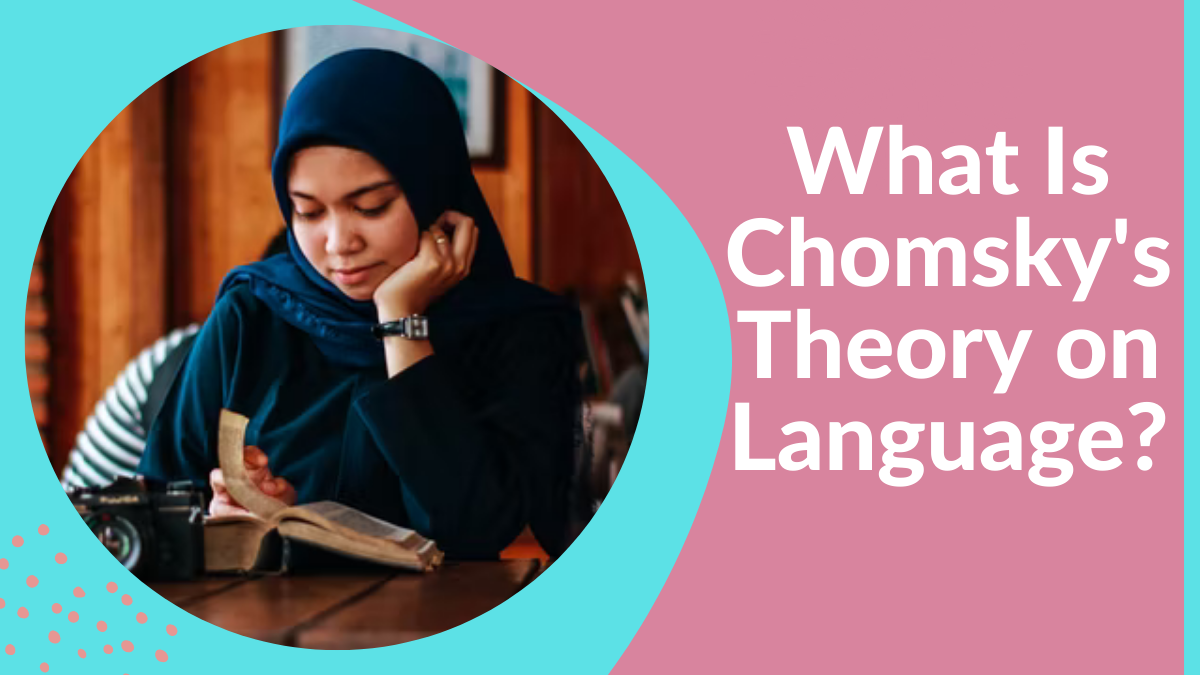 Noam Chomsky is arguably the most well-known and influential linguist of the twentieth century’s second half. He has made several bold statements about language, including an innate talent, meaning that we are born with a set of laws regarding language in our heads, which he refers to as the “Universal Grammar.”

Universal grammar serves as the foundation for all human languages.

If a Martian linguist came to Earth, he would conclude that there was just one language, with several regional variations. He’d be able to study the language and deduce the rules from the patterns he hears and other languages’ patterns.

The importance of linguistics in modern sciences is at the heart of Chomsky’s language ideas. According to him, learning languages necessitates a thorough understanding of human nature and intellect.

The mechanism of language learning, according to Noam Chomsky, is derived from intrinsic processes. Innate is something that has been there in mind since birth. Chomsky’s theory is supported by youngsters who share the same linguistic group.

Furthermore, they are not influenced by external events that result in similar grammar. In 1977, he proposed his language acquisition hypothesis, which said that “all children have the same underlying limitations that characterize tightly the grammar they will construct.” He also claimed that we all live in a biological world, and the mental world is no exception, according to him.

According to Chomsky’s theory of language development, human infants are born with an innate capacity for languages, including many languages. However, nonhuman primates do not spontaneously acquire human languages compared to humans. While humans have attempted to teach other species to speak human-like languages, the results have been mixed. For example, gorillas and chimpanzees have been trained to speak American Sign Language. Both groups have learned hundreds of signs and concepts but not grammatically correct sentences.

According to Chomsky’s theory of language development, a child’s native syntax knowledge consists of a series of linguistic principles and switches inherited from the mother. As the child grows and becomes an adolescent, their syntax imprint is genetically inherited. Therefore, children who grow up in a bilingual family are likely to display multilingual abilities, as they are exposed to many different languages in this period.

In contrast, a child’s language development begins during their early biological period. Chomsky suggested that the child develops universal grammar and can recognize language categories from a young age. As a result, even a toddler understands that words have categories. For example, an 18-month-old learned that “a joke” referred to a thing, while “preaching” meant an action. In addition, a child can distinguish between two different words based on their form, such as by placing the article “a” before the word.

2. A General Concept on Linguistics

Linguistics studies the formal description of language structure, including speech sounds, meanings, and grammar. Linguists study language in terms of competency (dealing with the speaker-ideal listener’s Language Acquisition potential), whereas psychologists study language in terms of performance (how people use language). Psycho linguistics is a field of research that encompasses both methods of language study.

3. The Composition of Language

Language is a set of symbols and norms that allows people to communicate in meaningful ways. To be termed a language, a communication system must meet specific criteria: Objects, activities, events, and thoughts are represented by symbols, noises, gestures, or written characters. For example, people might use symbols to allude to objects in another location or events at a different period.

A language has meaning and may thus be understood by other people who speak it. A generative language is one in which the symbols can be combined to form unlimited messages. Rules control how symbols can be ordered in a language.

4. What Do You Mean by Language Acquisition?

Have you ever experienced the joy of staring through a hospital nursery window at a newborn baby? You’re perfectly aware that such babies are incapable of appreciating your heartfelt admiration, right? They can’t understand a word you say, let alone communicate with you.

Learning a language and communicating with others is known as language acquisition. It’s the transformation from a speechless awestruck to someone who can’t seem to stop chatting in class.

Language learning is “second language acquisition,” which occurs after mastering your original tongue.

Perhaps you speak English and want to learn Mandarin or Spanish. Perhaps you’re enrolled in a German course. Most readers of this site are probably in the same situation, finding that learning a second (or third) language has greatly enriched their lives.

People appear to learn their native language in about the same order and roughly the same method worldwide. The same broad pattern of progression is discovered in research on speech perception. They progress from broad to more specific abilities. That is, humans can discern between all potential phonetic contrasts as babies.

The views of behaviorist psychologists were created through a series of animal experiments. They undiscovered that by fostering habit formation, rats or birds might be taught to do various tasks. The researchers praised good behavior. Positive reinforcement was the term for this.

Although the notion has been present for hundreds of years, it is associated with Chomsky’s writings. Children are born with the ability to pick up on the human language. Humans are born with the ability to communicate. Children learn their language’s grammar through their inborn grammar. Certain parts of language organization appear to be predetermined by the human mind’s cognitive framework. This explains why certain fundamental elements of language structure are universal: every language has nouns/verbs, consonants, and vowels.

According to the cognitive theory of language acquisition, a kid first becomes aware of an ideas, such as relative size, and then learns the words and patterns to express that thought. Even if they are grammatically more sophisticated, simple ideas are communicated earlier than more complex ones—the conditional mood lasts.

7. What Is the Difference Between Native and Second Language Acquisition?

There are significant differences between learning a native language and learning a second language. For example, you weren’t handed a large list of vocabulary words to memorize or a heavy grammar textbook to sink your teeth into when learning your native speech. Instead, you were just with your mother and father, who informed you when to eat and sleep.

Your experience was fascinating, yet you were mostly unaware of it. You probably have no recollection of how you learned your native tongue. You were already speaking with your seatmate Steve, asking him if he had seen the new Mentos commercials while waiting for your first formal English lessons to begin before Mrs. Johnson ever stepped foot in that class.

Second language acquisition, on the other hand, takes place at a different time and in a new location. It usually happens when you’re older, perhaps in a school or university classroom, or even a virtual one nowadays.

Perhaps you’re learning a new language to communicate with consumers as part of your new work. Perhaps you want to learn how to flirt in a different language. Whatever the case may be, the procedures employed are vastly different from those used in childhood. You study grammar on purpose. You’ve got your word lists, complete with illustrations and translations. Apps, podcasts, and YouTube videos are all available.

8. What Are the Key Principles of Chomsky’s Language Acquisition Theory?

10. What Is Universal Grammar?

It is only because a diverse set of conceptual and methodological tools have been used to trap the elusive answers to these questions that we have learned anything about language acquisition at all: neurobiology, ethology, linguistic theory, naturalistic and experimental child psychology, cognitive psychology, philosophy of induction, theoretical and applied computer sciencehttps://www.helptostudy.com/tag/networking/. As a result, one of the clearest illustrations of the indispensability of the multidisciplinary approach known as cognitive science is language learning.

There’s no denying that we learn our native languages as a whole, including their vocabularies and grammatical structures. But, according to Chomsky, humans can learn a language because we’re born with universal grammar — a fundamental grasp of how communication works. Moreover, according to Chomsky and other linguists, all languages include similar elements. Language, for example, is divided into similar categories of words: nouns, verbs, and adjectives, to mention a few.

According to Chomsky and others, we may be born preprogrammed with universal grammar because practically all languages contain these qualities despite their other differences. Linguists such as Chomsky have advocated for universal grammar since children worldwide develop language similarly over short periods with minimal help.