What Did President Wilson’s Fourteen Points Propose About Communication Between Nations? 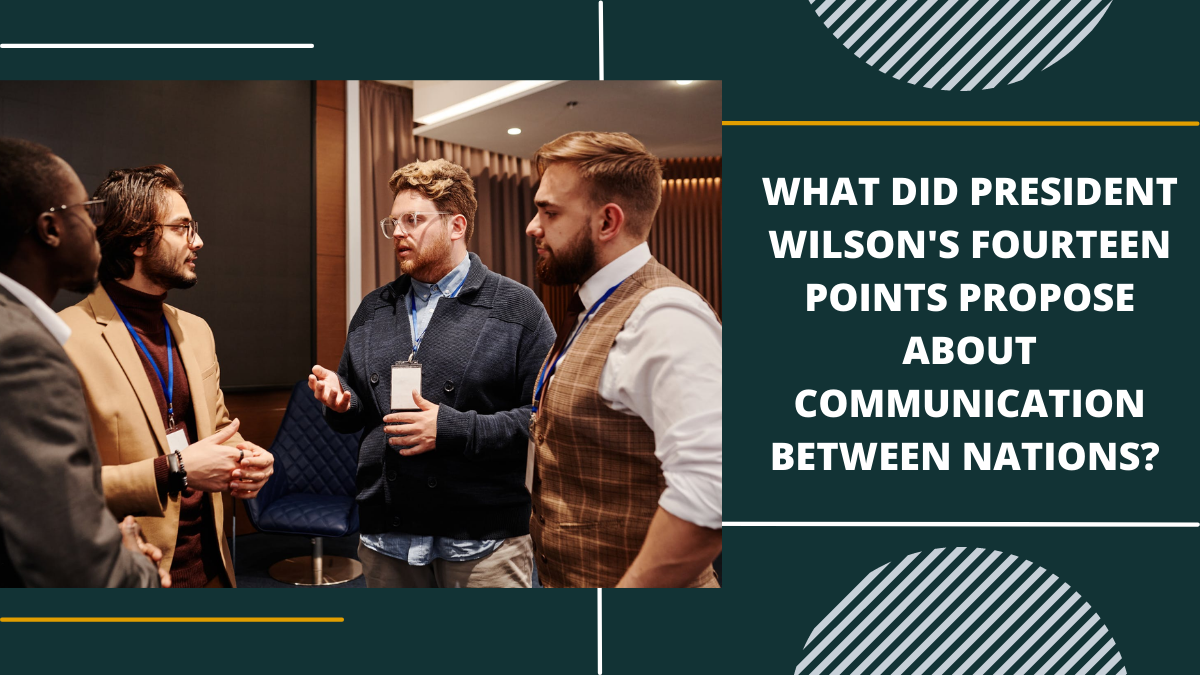 Thomas Woodrow Wilson was an American politician and professor who served as the United States‘ 28th President from 1913 to 1921. Wilson, a Democrat, served as president of Princeton University and as governor of New Jersey before winning the presidential election in 1912.

President Woodrow Wilson outlined a 14-point plan for world peace in his address to Congress on January 8, 1918. These arguments were later used as the foundation for peace talks at the end of World War I. President Wilson delivered a speech on War Aims and Peace Terms on this day, outlining 14 ideas as a template for world peace to be utilized in peace negotiations following World War I.

Wilson addressed the origins of World War I directly in his speech, advocating for the elimination of secret treaties, a reduction in armaments, an adjustment in colonial claims in the interests of both native peoples and colonists, and freedom of the seas. Wilson also presented ideas to ensure future global peace.

Things to keep in Mind When You Read Woodrow Wilson’s Fourteen Points:

I. Open covenants of peace, openly arrived at, after which there shall be no private international understandings of any kind but diplomacy shall proceed always frankly and in the public view.

II. Absolute freedom of navigation upon the seas, outside territorial waters, alike in peace and in war, except as the seas may be closed in whole or in part by international action for the enforcement of international covenants.

III. The removal, so far as possible, of all economic barriers and the establishment of an equality of trade conditions among all the nations consenting to the peace and associating themselves for its maintenance.

IV. Adequate guarantees given and taken that national armaments will be reduced to the lowest point consistent with domestic safety.

V. A free, open-minded, and absolutely impartial adjustment of all colonial claims, based upon a strict observance of the principle that in determining all such questions of sovereignty the interests of the populations concerned must have equal weight with the equitable claims of the government whose title is to be determined.

VI. The evacuation of all Russian territory and such a settlement of all questions affecting Russia will secure the best and freest cooperation of the other nations of the world in obtaining for her an unhampered and unembarrassed opportunity for the independent determination of her own political development and national policy and assure her of a sincere welcome into the society of free nations under institutions of her own choosing; and, more than a welcome, assistance also of every kind that she may need and may herself desire. The treatment accorded Russia by her sister nations in the months to come will be the acid test of their goodwill, of their comprehension of her needs as distinguished from their own interests, and of their intelligent and unselfish sympathy.

VII. Belgium, the whole world will agree, must be evacuated and restored, without any attempt to limit the sovereignty which she enjoys in common with all other free nations. No other single act will serve as this will serve to restore confidence among the nations in the laws which they have themselves set and determined for the government of their relations with one another. Without this healing act, the whole structure and validity of international law are forever impaired.

VIII. All French territory should be freed and the invaded portions restored, and the wrong done to France by Prussia in 1871 in the matter of Alsace-Lorraine, which has unsettled the peace of the world for nearly fifty years, should be righted, in order that peace may once more be made secure in the interest of all.

IX. A readjustment of the frontiers of Italy should be effected along clearly recognizable lines of nationality.

X. The peoples of Austria-Hungary, whose place among the nations we wish to see safeguarded and assured, should be accorded the freest opportunity to autonomous development.

XI. Rumania, Serbia, and Montenegro should be evacuated; occupied territories restored; Serbia accorded free and secure access to the sea, and the relations of the several Balkan states to one another determined by friendly counsel along historically established lines of allegiance and nationality; and international guarantees of the political and economic independence and territorial integrity of the several Balkan states should be entered into.

XII. The Turkish portion of the present Ottoman Empire should be assured a secure sovereignty, but the other nationalities which are now under Turkish rule should be assured an undoubted security of life and an absolutely unmolested opportunity of autonomous development, and the Dardanelles should be permanently opened as a free passage to the ships and commerce of all nations under international guarantees.

XIII. An independent Polish state should be erected which should include the territories inhabited by indisputably Polish populations, which should be assured free and secure access to the sea, and whose political and economic independence and territorial integrity should be guaranteed by international covenant.

XIV. A general association of nations must be formed under specific covenants for the purpose of affording mutual guarantees of political independence and territorial integrity to great and small states alike.

In relation to these fundamental rectifications of wrong and assertions of right, we consider ourselves to be intimate partners of all governments and peoples united in opposition to the Imperialists. We cannot be split in our interests or in our goals. We will remain united until the end. We are not envious of Germany’s greatness, and nothing in this program undermines it. We do not begrudge her any achievement or distinction in learning or pacific enterprise that has made her record extremely bright and very enviable.

We do not aim to harm her or obstruct her lawful influence or power in any manner. We do not intend to battle her with armaments or with hostile trade arrangements if she is prepared to join us and the other peace-loving nations of the world in covenants of justice, law, and fair dealing. We merely wish for her to embrace a place of equality among the world’s people—the new world in which we now live—rather than a place of mastery.

We have, without a doubt, spoken in words that are too concrete to allow for any more doubt or question. A clear premise throughout the entire scheme I’ve detailed. It is the principle of justice to all people and nationalities, as well as their right to live in equal liberty and safety with one another, whether strong or weak.

No aspect of the international justice organization can stand unless this principle is made its foundation. The people of the United States could act on no other principle, and they are willing to commit their lives, honor, and everything they own to the vindication of this concept. The moral climax of this culminating and ultimate struggle for human liberty has arrived, and they are ready to test their own strength, greatest purpose, honesty, and commitment.

How Did the Fourteen Points Intend to Affect Change In the World?

While half of the Fourteen Points addressed specific territorial disputes between the fighting countries, the other half envisioned a peaceful future. They advocated for greater openness in international relations, free commerce, freedom of the seas, arms reductions, national self-determination, and the adjustment of colonial claims to give equal weight to the peoples of colonized countries. Most importantly, they envisioned a worldwide organization to ensure all member countries’ independence and territorial integrity.

What Significance Did the Fourteen Points Have?

Germany requested an armistice based on the Fourteen Points in October 1918. Despite the fact that the Armistice and Treaty of Versailles did not conform to the idealistic Fourteen Points, and World War II quickly followed, those ideas shaped the subsequent world order. They provided information to all decolonization efforts and established a new standard of national identity. The League of Nations concept was the seed that grew into the United Nations.

Was Wilson’s 14-Point Effort a Success?

However, Wilson’s efforts to win the adoption of his Fourteen Points were eventually unsuccessful because France and Britain refused to adopt some specific points and key concepts, despite their attempts to satisfy the American president by agreeing to the foundation of his League of Nations.

What Went Wrong With the Fourteen Points?

The delegates of Britain, France, and Italy negotiated the Treaty of Versailles in order to enhance their own positions and considered it was important to leave Germany too weak to initiate another war. President Woodrow Wilson of the United States agreed to almost any compromise of the Fourteen Points as long as the treaty included the League of Nations. Because many members of the United States Senate believed that joining that group would jeopardize national sovereignty, the treaty was defeated in the Senate.

President Woodrow Wilson was nearly assassinated while campaigning for the Treaty of Versailles. Wilson suffered a stroke while on a whirlwind speaking tour of the United States to stir up support for the pact. He was effectively paralyzed for several months. He never fully recovered from his illness and died in office in 1921, a broken man.

Though American forces, like everyone else, ceased fighting in November 1918, it took until July 1921 for the United States Congress to issue a simple resolution declaring that America’s war with Germany had ended.

What Were Three of Wilson’s Primary Themes In His Fourteen Points?

What Were President Wilson’s Fourteen Points and Germany’s Surrender All About?

The notion aimed at promoting international peace, transparency, a reduction in weaponry, and the flexibility of the oceans to assist abused minorities gain self-assurance and trade. The fourteen points were a rationale for Germany’s capitulation terms, which were discussed at the 1919 “Paris Peace Conference.”

Wilson’s Fourteenth Point Was Integrated Into the Treaty In What Way?

It established the League of Nations as an international organization whose mission would be to maintain international peace. The allies divided the Ottoman-lost regions in Southwest Asia into mandates rather than independent nations.

How Did Wilson’s Fourteen Points Vary From the Treaty of Versailles?

Which of the Following Was Not One of Wilson’s Fourteen Points, On Which He Founded America’s Idealistic Foreign Policy During WWI?

Many people, particularly those suspected of disloyalty, are denied international religious freedom and tolerance in Germany and Mexico.

How Did the Fourteen Points Explain a New Foreign Policy Ideology In the United States?

The 14 Points called for a just peace for all parties involved in the Great War, the end of secret treaties between nations, free trade among nations, freedom of the seas, self-determination for people under colonial rule, and the formation of an international organization similar to the League of Nations to deal with global security.

So, these are all the 14 points that President Wilson has given in his speech. Hope this article has provided you with enough knowledge on this topic.