What Degree Does a Video Game Designer Need? 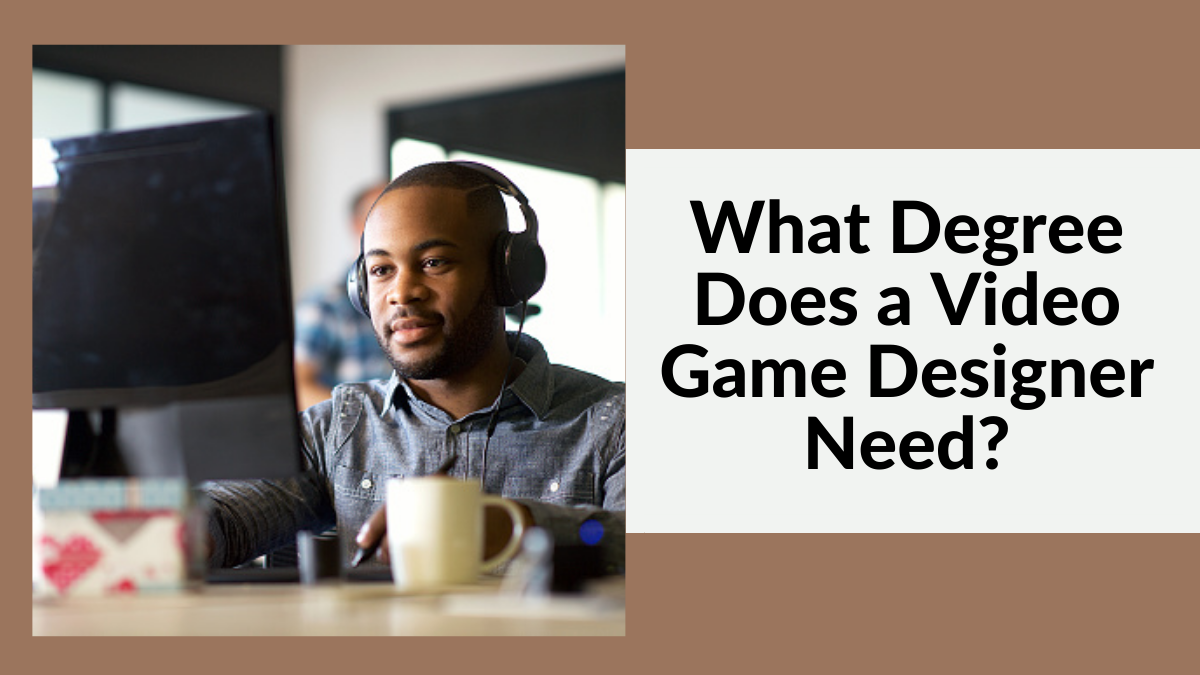 Video game designers are creative individuals who are in charge of the design and layout of a video game. They are the ones who design a game’s storylines, characters, levels, scenarios, and so on. Video game design is a competitive field with many different career routes. There are numerous paths to becoming a video game designer, each of which necessitates a specific level of education and expertise. Understanding what a video game designer does and how to become one will help you decide if this is the appropriate job for you.

In this article, we will discuss the tasks of a video game designer, how to become one, and the various educational options available to enter this industry.

What Exactly Is the Job of a Video Game Designer?

A video game designer is someone who creates visual content for video games. They develop characters, places, and interactive stories using graphic design approaches and programming knowledge. A video game designer’s primary responsibility is to create aesthetically appealing material that engages the user. To create a good game, designers typically collaborate closely with a team of developers, authors, animators, and testers. They may also meet with sales and marketing representatives to design game commercials.

Designers of video games can concentrate on certain components of the game or on the overall content. A game designer could build a variety of games, including Mobile games, Console games, Video games on computers, Massively multiplayer online games.

What Are the Qualifications Do a Video Game Designer Required?

There are numerous paths to becoming a video game designer; here are some of the most typical stages you might take to pursue this professional path.

High school graduation or equivalent is required for video game creators. It’s beneficial to take computer coding and graphic design classes in high school if possible. If you intend to pursue a bachelor’s degree, strive for a high GPA in order to be a more competitive candidate for college admission. You should also try for good ACT or SAT scores.

When deciding whether or not to pursue a bachelor’s degree, you might look at employment in your desired area or company. Find out if the majority of video game design jobs demand a college degree or a high school diploma as a minimum prerequisite. You should also consider whether you want to pursue a more specialized degree in design by attending college.

Get a bachelor’s degree.

A bachelor’s degree in graphic design, multimedia design, or a similar discipline is required for the majority of video game designers. Some universities provide a degree in video game design. Software engineering, 2D and 3D animation, programming languages, and computer design are common topics of study.

During your undergraduate career, you should also consider doing one or more internships. An internship allows you to gain hands-on experience in the field while also gaining vital skills. You can also network with specialists in the subject, increasing your chances of having excellent recommendations once you graduate. Internships in design or software development firms may be available, which could be beneficial for a career as a video game designer. Depending on where you live, you might be able to secure an internship with a game company.

Boot camps are short-term workshops that teach you the essentials of programming and design in a concentrated setting. Many boot camps are available in various forms of game creation, such as mobile or console. Some programs are only eight weeks long, while others may span many months. Depending on the boot camp you select, you will learn how to code in a few computer languages as well as how to use your knowledge realistically. Boot camps can assist you in developing a resume or portfolio of experience, abilities, and game projects.

Individuals who want to learn video game creation at their own pace can find a wealth of tools online. When you have the time, self-guided education allows you to investigate a wide range of topics. While self-guidance is often a slower road than other traditional sources, it can be beneficial if you are currently changing careers while also working another full-time employment. It’s also useful for staying up to date on industry trends.

Because video gaming is a competitive industry, it is critical to obtain experience as soon as you graduate. You might be able to get a position as a junior designer right out of college, but you’ll probably have to look for similar opportunities in adjacent sectors. Jobs as a graphic designer, animator, or software developer can all help you get experience and improve your portfolio.

You might also volunteer or get self-directed experience by creating little games on your own. Look for volunteer activities where you may put your design and programming abilities to use. There are also numerous videos and tutorials available online that can help you construct small-scale games.

Create a CV and a Portfolio.

Hiring managers will find you more enticing if you have a well-written CV and an appealing portfolio. Add your experience and any projects you’ve worked on to your resume. Mention any specific games you created, the platform on which they were created, and the software and coding languages you utilized, if possible. Include design programs and programming languages you are familiar with in the “Talents” area of your resume, as well as any soft skills you have, such as communication and teamwork.

Your portfolio is a wonderful approach to demonstrate to the potential employer all of your talents and experience. You can include game pictures, a link or download to a game level, gameplay videos, gaming reviews, a link to a demo reel, back-end code, and more in your portfolio.

You can also include a personal bio, career experience, and other accomplishments in your portfolio. Your portfolio should represent your distinct design traits as well as your personality.

As you advance in your video game design career, you should continue to acquire and develop new talents and abilities. Because the software and coding languages are always evolving, it’s critical to stay up to date on new innovations in order to be a leader in your profession. You can learn about the current trends by reading industry news and blogs, and you can constantly practice the abilities you already have to improve them.

If you want to be successful in leadership or management jobs, you can work on developing specific soft skills. Communication, teamwork organization, and time management are frequently required in project management. These abilities might assist you in leading a design team or managing various design projects.

Continue to be Involved.

Membership is available in a variety of video game and design associations. Joining a professional association or organization can help you network with other professionals and create useful contacts in your sector. Many organizations host conferences where you can learn more about various parts of design and development through workshops, presentations, and panels. Some groups also provide professional certifications that demonstrate your knowledge of a particular area.

What Is the Economic and Career Outlook?

What Are the Alternate Career Options for a Video Game Designer?

Web developer and computer programmer are two jobs that are similar to game designer. Web developers can find work creating and designing websites, as well as creating content, with only an associate’s degree in web design or a related discipline. The BLS predicts much faster-than-average job growth of 13% for this career from 2018 to 2028. The BLS recorded their annual median pay as $69,430 in 2018.

Computer programmers write code to develop software applications. They often have a bachelor’s degree in computer science and specialize in numerous programming languages. The BLS forecasted a 7% reduction in average employment for computer programmers from 2018 to 2028, with an annual median income of $84,280 in 2018.

Game designers are skilled software developers with bachelor’s degrees who contribute to the design and development of video and computer games.

What Is the Major of a Game Designer?

Bachelor’s degrees are popular among video game designers. Some colleges and institutions offer particular degrees in game design, but many other degrees, such as computer science, computer engineering, software engineering, graphic design, digital arts, and animation, can give a gateway into the area.

Game creation is an excellent professional path. However, there is a lot of competition in this sector. One should expect to devote a significant amount of time and to face several hurdles and, at times, failure.

Is it Difficult to Be a Video Game Designer?

Becoming a game designer is just as difficult as entering any other profession, but with increased competition and the need to remain always fresh and current. However, by putting in the effort and having your long-term goals in mind, it may be a great and happy career that is as easy to advance through as any other.

Is it Possible to Make a Living as a Game Designer?

You must also be willing to work late into the night to ensure that the game functions properly. While this is a tough atmosphere, it is a steady career with great potential for advancement.

Is There a Big Demand for Video Game Designers?

Here, we’ve mentioned some benefits of being a Video Game Designer.

A Workplace That Is Both Casual and Enthusiastic

Individuals that are living their greatest passion make up the culture of game designers. As a result, they are eager, committed, and inventive. They can feel the satisfaction of creating something that not only they are personally enthusiastic about but that others can appreciate as well. This is what distinguishes the game design work environment from those in other industries.

Analytical and Creative Thinking Should be Used.

Designers are responsible for conceptualizing many aspects of a game, from the rules to the concepts and structure. There are several specialized areas of employment, such as level design, script authoring, gameplay design, and level mechanics, but all of these require aesthetic as well as technological understanding.

Playing Games Is a Necessary Part of Your Job.

Many people are drawn to the field of game design because they enjoy playing games, which is not only encouraged but also necessary. Designers can get an early peek of a game they’re working on, even if they’re only responsible for a small section of it.

The United States Bureau of Labor Statistics indicates that the median annual wage for a software developer is around $97,990 as part of the larger career field of software development. Salary will vary depending on specialization within the area and other considerations. Those working on the West Coast might expect a better wage because it is the Mecca of Game Design.

With a Steady Career, You Can Enter a Dynamic Industry.

This career industry is continually changing. Those who are a part of it are always learning new things while remaining in a well-established and secure field. Even in the previous ten years, video games have evolved into their own subculture, and this trend is not going away anytime soon.

This is how video game creators are surrounded by like-minded people that share the same passion for creating something out of nothing, working in an ever-evolving field that allows ideas to become a reality. You have a bright future in this industry.