What Degree Do You Need to Be a Video Editor? 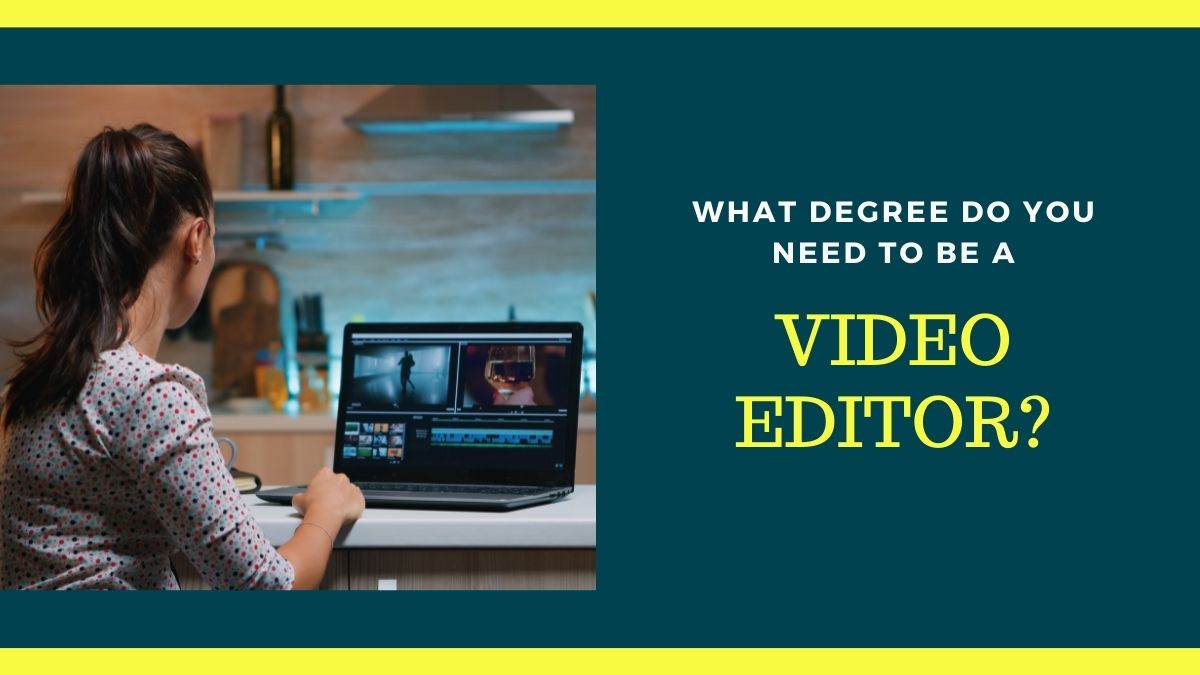 A Video Editor is responsible for transforming raw material shot by a film team and director into the final output. This entails following a plan, script, or shot list and putting the footage together into a single movie or film. Many camera angles and takes are frequently recorded in video and film work. A bachelor’s degree in an area connected to cinema or broadcasting, such as communications, is required for most editor roles. Many colleges offer cinematography and video-editing software courses. The coursework combines film theory with hands-on experience. A brief term of on-the-job training is available for editors. Getting a job as a video editor is a fantastic opportunity. There are a plethora of options accessible, and new and innovative ideas are always on the horizon. As a result, you’ll have a career path that will keep you going for a long time. From 2020 to 2030, the overall employment of film and video editors and camera operators is expected to expand by 29%, substantially faster than the average for all occupations. Each year, around 8,600 job vacancies for film and video editors and camera operators are expected the decade.

Film and video editors come in a variety of shapes and sizes. You could work on commercials, corporate training videos, feature films, music videos, and television shows, among other things. Film and video editors are in charge of matching audio and video files, as well as stitching together video snippets to make a complete video or film. Work can be found in a variety of industries, and all that is required is a bachelor’s degree in film and video production; however, master’s degrees are available for individuals who want to advance their careers.

According to the US Bureau of Labor Statistics, video editors earn an annual salary of over $59,500. A video editor’s hourly pay might be as high as $40 (US). A professional editor can earn up to $80,000 per year, while a newcomer can make up to $40,000 per year. The national median wage for film editors, including video editors and camera operators, is $29.76 per hour.

Starting salary for assistant editors working for a television or post-production studio ranges from £18,000 to £25,000 per year. You may make £21,000 to £35,000 as a film or video editor with experience. Senior editors can earn between £37,000 and £70,000 per year, however, the higher end of this range is only attainable to senior editors working on big-budget projects. A film/video editor is not entry-level employment; in most cases, you’ll need to start at a lower-paid level, such as as a runner, with pay that’s around the national minimum wage. You could then advance to assistant editor, where you could earn more money, before moving up to the full editor. The majority of editors are compensated on a contract basis and work as freelancers. Because fees vary, it’s recommended to check with particular firms or the Broadcasting Entertainment Cinematograph and Theatre Union for the most up-to-date freelance rates (BECTU). If you acquire employment through an agency, they’ll negotiate rates with you and then charge you a percentage or a flat fee.

You don’t need a foundation degree, HND, or degree to work as a film or video editor, but you should have dedication and perseverance to succeed in the field. You’ll need to be able to show that you have the relevant skills, therefore a degree or HND in film or media production could be beneficial. Communication and media studies, fine art or visual art, graphic design, information technology/multimedia, photography, film, or television are all relevant. You’ll need to know how to use certain editing software programs like Avid or Final Cut Pro. Courses covering these applications are available at various levels, but they can be costly, so do your homework to locate one that fits your job and training goals. It’s critical that you have a good understanding of computers and the ability to operate with digital technology. Having hands-on experience with cutting-edge technology can help you stand out from the crowd. A postgraduate degree isn’t required, but there are relevant courses that can help you gain additional skills and offer you an edge over other applicants.

A fine arts master’s degree program in film and video production (MFA) equips students with specialized knowledge in a specific component of film production. Students can workshop their ideas and obtain feedback from instructors and other students in most fine arts master’s degree programs in cinema and video production. Students interested in working as video editors should pursue a film and video editing concentration or a directing concentration. A student who opts for the directing option is involved in the entire production process. They must compose the script, find actors, direct the actors, shoot the film, and edit it. An editing student, on the other hand, works mostly in the post-production process, which involves video editing. To complete the degree, you must complete a final thesis assignment.

Finding and developing the script, recruiting a film director and actors, finding sources of funding, managing the budget, and managing the production team are the five components of ‘producing’ a film, strictly speaking. However, a typical film production degree program covers more than just the film producer’s responsibilities. Screenwriting, directing, cinematography, producing, production design, and editing are just a few of the important skills covered.

Operation of digital cameras and light meters; camera shots and angles; creating moods with lighting and color; image manipulation and retouching; editing and post-production; video and sound synchronization; and computers and software in the profession are among the topics covered in the discipline’s coursework. In a nutshell, film and photographic technology schools teach students about the technical aspects of visual storytelling.

Cinema is a worldwide phenomenon with significant artistic, cultural, and political ramifications. Students in cinema studies gain knowledge of how films resonate in our lives by studying film history, film theory, film analysis, and film criticism. Film genres, authorship, philosophies, and styles are all explored. They are taught about filmmaking and editing. When students finish their education, they discover that their technical skills, as well as their artistic and aesthetic sensibilities, can be utilized in a wide range of creative endeavors.

The performing arts and the fields that support them are taught in theatre arts degree programs. Some curriculum is specialized in a particular field, such as acting, dance, or music. Others may cover a variety of topics related to the live theatrical profession, such as theatre history, dramatic literature, playwriting, directing, and/or self-promotion. Others may concentrate on or include lighting, scenic design, costume design, and make-up as technical/supportive skills.

How to Become a Video Editor:

By modifying and editing video to express a story or message, video editors assist in bringing television, movies, and other forms of media to life. Video editors edit moving images with computers and sophisticated editing software, and they collaborate closely with the director to ensure the final product meets the project’s goals.

While video editing schools may expose students to various types of video editing software, some employers may provide specialized training to their video editors in a specific type of software. Video editors generally become experts in the software they use as a result of this.

Professional certification is an excellent approach to show that you know what you’re talking about. Software vendors, such as Avid or Adobe, offer their certifications for their products. Some of these credentials may be available in various levels, such as Certified User or Certified Professional. Applicants for most certificates must meet educational and/or experience requirements as well as pass an exam.

To improve their skills and reputations, video editors should work on as many projects as possible. With more experience, editors are more likely to be able to work independently on projects and/or have more creative freedom on their projects. Video editors who want to enhance their careers as producers or directors in the entertainment industry can do so.

To Work As a Video Editor, You’ll Need the Following Skills:

You’ll need to demonstrate a keen eye for detail and a critical mind, patience and concentration, the ability to listen to others and work well as part of a team, a high level of self-motivation, commitment and dedication, organizational and time management skills, the ability to work under pressure and to deadlines, and written and oral communication skills.

What Subjects May a Video Editor Specialize in?

Visual artists, video producers, and communicators can all major in video editing. Video editing lessons are frequently part of a broader degree program that educates you about all aspects of video recording for various purposes. These degrees will teach you the ins and outs of video editing technologies as well as the fundamentals of video production, such as what equipment a videographer use and how to take high-quality movies. The following are some of the majors for video editors: production of films and videos, photojournalism, communication via audiovisual means broadcasting on radio and television.

Video editing is crucial because it allows us to merge pictures and sounds in a way that makes us feel emotionally linked to the video we’re watching. Video editing is, without a doubt, one of the most significant tasks in the movie industry. A passion for language isn’t required for a profession as an editor. Successful editors turn their passion and skill into a way to make a career and make a difference in the world. As a video editor, you get to watch how everything comes together to form the final product. If you want to go into another career in the video industry, this will help you.