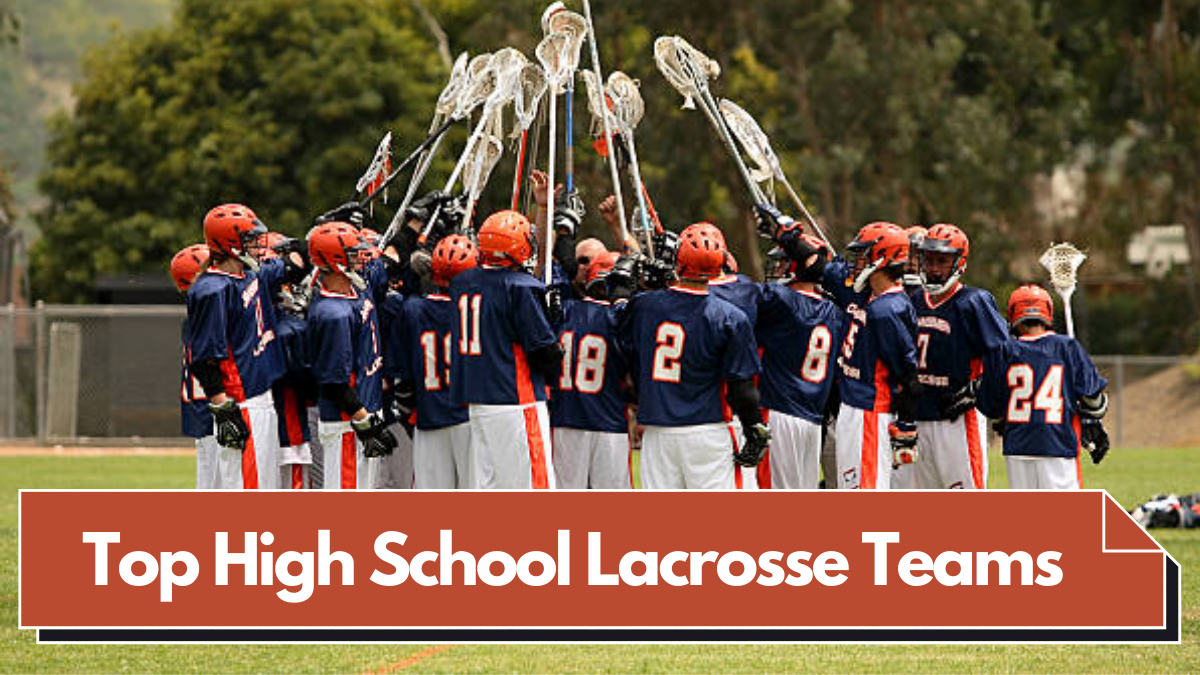 Lacrosse is one of the most popular games in the U.S. It might not be very popular among other countries, but the high schools in the states take lacrosse to the very next level. Lacrosse is a timeless game dating back to the 17th century. Originally known as “stickball,” lacrosse was first played by Native American Indians. Stickball events continued for a few days bringing in hundreds of thousands of players.

The first lacrosse player was said to play the role of heroes who brought fame to their nations by winning. These American heroes are found mainly on the east coast. Lacrosse is now considered one of the fastest-growing sports in the world. Lacrosse, once considered an east coast sport, is now increasingly popular on the west coast. This list is a compilation of the best high school lacrosse teams.

The Hingham Boys Lacrosse team is probably the most athletic team that had to see their final season getting wiped out because of the pandemic. The Harbormen would have had 17 seniors on their team, and nearly every one of them would have been able to enjoy some playing time. The team won the Division 2 state title in 2017. When they moved up to division 1 in 2018, everyone expected them to take some time to get back on top of the charts. The Harbourmen Breezed through competition in division 1 but eventually lost to state champion BC High in the 2018 south final. They eventually grabbed the 2019 regional title and then falling in the EMass final to Lincoln-Sudbury. The Harbourmen are sure to be looking forward to coming back strong this season.

B.C High were the 2018 Div. 1 EMass champions. They slogged through the 2019 season with a mediocre performance with a lot of ups and downs. They had a 10-8 record before making it hot in the tournament. The Boston High Players knocked off Needham and Wellesley in the tournament before nearly upsetting a powerful Hingham in the sectional semi-finals. The B.C High arsenal is powerful and they have sort of a giant slayer image among other teams. They are not to be taken lightly and are sure to create some major upsets this season.

The Dragons did not have a very smooth tournament campaign in the Div. 1 South Sectionals in 2019. They lacked consistency and saw a lot of highs and lows.  After breezing to a 12-4 win over Bridgewater-Raynham in the first round, Duxbury defeated Xaverian and Franklin in one-goal games to race to the section final without much trouble. In that game, arch-rival Hingham brought their tournament dreams to a halt with a goal from then-junior Cooper Dainton (now a freshman on the University of Richmond men’s lacrosse team). The Dragons will be looking for revenge this time around with their rigorous practice sessions and team spirit. They will surely be a force to be reckoned with this time.

The Hanover Hawks have a lot of catching up to do. Following a loss in the 2019 Div. 2 South Sectional finals with a team of young players, the Hawks were primed all set and ready to go for a big 2020 season. So far they only have a 4:3 record and they only have a one-win winning streak to show. The Hawks have always been a tournament favorite but this time they have lost a lot of their spirit and their gameplay seems to be lazy. But they are known for comebacks and the fans are hoping to see a drastic turn of things soon from the boys.

The Clippers had an amazing 2019 season. They were in a row with back-to-back wins and a lot of confidence shown from the players. But their run came to a sudden end with a loss to arch-rival Cohasset in the Div. 3 South final. The defeat was unexpected and left the fans disappointed. Norwell enters this season with a lot of unknowns, but they’re always a tough outcome tournament time. They currently have a 7:2 record this season and their last game was against Duxbury which they lost by a narrow margin. They’ll be eyeing a win this season and are all prepped up for it.

Marshfield is one school that has always been highly supportive of its athletes. The school has various scholarships and funding for students who are inclined to sports. So naturally, their lacrosse teams are also one of the best in the league. This season so far, their campaign hasn’t been very good though. They are moving with a record of 3:4 with more losses than wins. The addition of the Rams to the Patriot League has boosted it to be one of the best leagues in the state. Marshfield can stand neck to neck with the likes of usual heavyweights such as Hingham, Duxbury, Hanover, and Scituate. With teams like Plymouth South and Silver Lake on the rise, there are no days off in this league. So the Rams really need to step up their game for the coming games.

The Panthers reached the Div. 2 South semifinals in 2019 despite being an 11-seed. This shows the amount of spirit and dedication they have. Plymouth South gave eventual sectional champion Sandwich everything it could handle in the semifinals and it was one of the toughest competitions they’ve ever had. The records might take a hit this season, especially for the Patriot League teams in the Keenan Division, but come June teams will be trying to stay away from this bunch. So far in the league things are not looking good for them as they were on a 3 match losing streak. But still, they are on a record of 6:3 which is not bad at all and the fans expect a strong comeback soon. They won their last game with Pembrooke with a sizeable margin.

The Trojans may not be the best team on the list but they sure have the capability to cause many upsets. They are entering the league with a not-so-good previous season and so far their performance has been mediocre. Currently, they are on a one-win streak and their record is 4:3 which is not bad considering all their matches were with the heavyweights. With a better game plan and a lot of will, they will definitely be able to turn things around this season and at least come up to the semifinals and cause some major upsets.