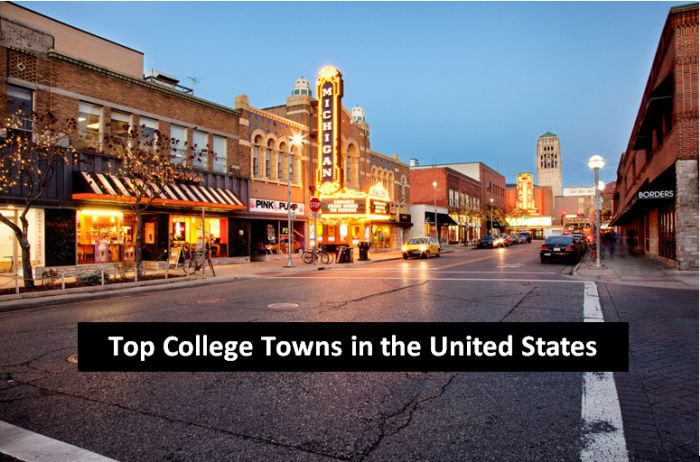 Looking for a college or university for your education with the best college town? Whether you want to get an undergraduate degree or master degree, we’ve searched for the best college towns across the nation and compiled a list of the “Top College Towns in the United States” for you.

A university ranks high with their town which generally has great public spaces, fine restaurants, and unique qualities that make them stand out. To determine the best town to get your education, start your search with our comprehensive list.

In the list below, all mentioned towns that based on U.S News World Reports ranking are highly accessible and generally offer a variety of sights and scenery, arts and entertainment venues, and vibrant nightlife. Good luck!!

Amherst is a town in Hampshire County, Massachusetts State. The Town of Amherst is a diverse inclusive community offering numerous educational and cultural opportunities. Host to Amherst College, Hampshire College, and the University of Massachusetts at Amherst, the Town enjoys a tradition of the open, professional, and high level of government services, quality education, support for open space and agriculture, and respect for its history.

The city of Ann Arbor is considered one of the nation’s best college towns, and one of America’s most bike-friendly and sustainable communities, with art and culture everywhere — theater, music, literature, and lectures. Ann Arbor is home to the University of Michigan and the sixth-largest municipality in Michigan by population (113,934). Ann Arbor was founded in 1824 by land speculators John Allen and Elisha Walker Rumsey. Ann Arbor is home to several private schools and charter schools. There are 21 elementary schools, five middle schools, two K-8 schools, three traditional high schools, and three alternative high schools in the district.

Athens is a consolidated city-county and college town in the U.S. state of Georgia. It is a perfect combination of a small southern town with a lively college atmosphere. Athens is home of the University of Georgia. Athens is the sixth-largest city in Georgia, and the principal city of the Athens metropolitan area, which had a 2017 estimated population of 209,271, according to the U.S. Census Bureau. The Clarke County School District supports grades pre-school to grade twelve. The district consists of fourteen elementary schools, four middle schools, and three high schools (one non-traditional). Athens is home to a growing number of young technology companies.

Austin is one of the best college towns in the United States. It is the fourth-most-populous city in Texas (931,820). U.S. News & World Report named Austin the #1 place to live in the U.S. for 2017 and 2018. It is also the fastest growing large city in the nation. A number of Fortune 500 companies have headquarters or regional offices in Austin, including Amazon.com, Apple Inc., Cisco, eBay, General Motors, Google, IBM, Intel, Oracle Corporation, Paypal, Texas Instruments, 3M, and Whole Foods Market. Dell’s worldwide headquarters is located in nearby Round Rock, a suburb of Austin. The Austin area has 29 public school districts, 17 charter schools, and 69 private schools. It has a large network of private and alternative education institutions for children in a preschool-12th grade.

Berkeley is one of the most socially liberal cities in the United States. It is a city on the east shore of San Francisco Bay in northern Alameda County, California. Berkeley is home to the oldest campus in the University of California system, the University of California, Berkeley, and the Lawrence Berkeley National Laboratory. Berkeley has 11 public elementary schools and three middle schools. There is also the Bay Area Technology School, the only school in the whole Bay Area to offer a technology- and science-based curriculum, with connections to leading universities. Berkeley also houses Zaytuna College, the first accredited Muslim, and liberal-arts College in the United States.

Boston is the capital city of the U.S. state of Massachusetts and one of the oldest cities in the nation. Some of the most renowned and highly ranked universities (Harvard, MIT, and Tufts) in the world are located near Boston. Greater Boston has more than 100 colleges and universities. The Boston Public Schools enroll 57,000 students attending 145 schools. Boston also operates the United States’ second-oldest public high school and its oldest public elementary school. The city’s largest private universities include Boston University. Boston has the second-most professional sports championships among U.S. cities (37 overall championships for five major leagues). Boston has teams in the four major North American professional sports leagues plus Major League Soccer and has won 37 championships in these leagues, as of 2017. It is one of five cities (along with Chicago, Los Angeles, New York and Philadelphia) to have won championships in all four major sports.

Boulder is the 11th most populous municipality in the U.S. state of Colorado. The city frequently receives high rankings in art, health, well-being, quality of life, and education. Politically, Boulder is one of the most liberal and Democratic cities in Colorado. Charter schools (receiving public funding but under private management) within the city of Boulder include Preparatory High School (9–12), Summit Middle School (6–8), and Horizons Alternative School (K–8). A variety of private high schools, middle schools, and elementary schools operate in Boulder. Boulder is famous for its association with American frontier history and for being the home of the main campus of the University of Colorado, the state’s largest university.

Madison is a town in Dane County, Wisconsin, United States. The Town possesses a unique historic charm and hosts two historic districts that are included on the State and National Registries. A new report says that Madison, Wisconsin — a city of dozens and dozens of accolades — just made a list that they should not be proud of. One of the nation’s top college towns, Madison is a diverse city that offers residents outdoor recreation in every season and a collection of cultural attractions.

According to CNBC news, there are other top-ranked college towns available: