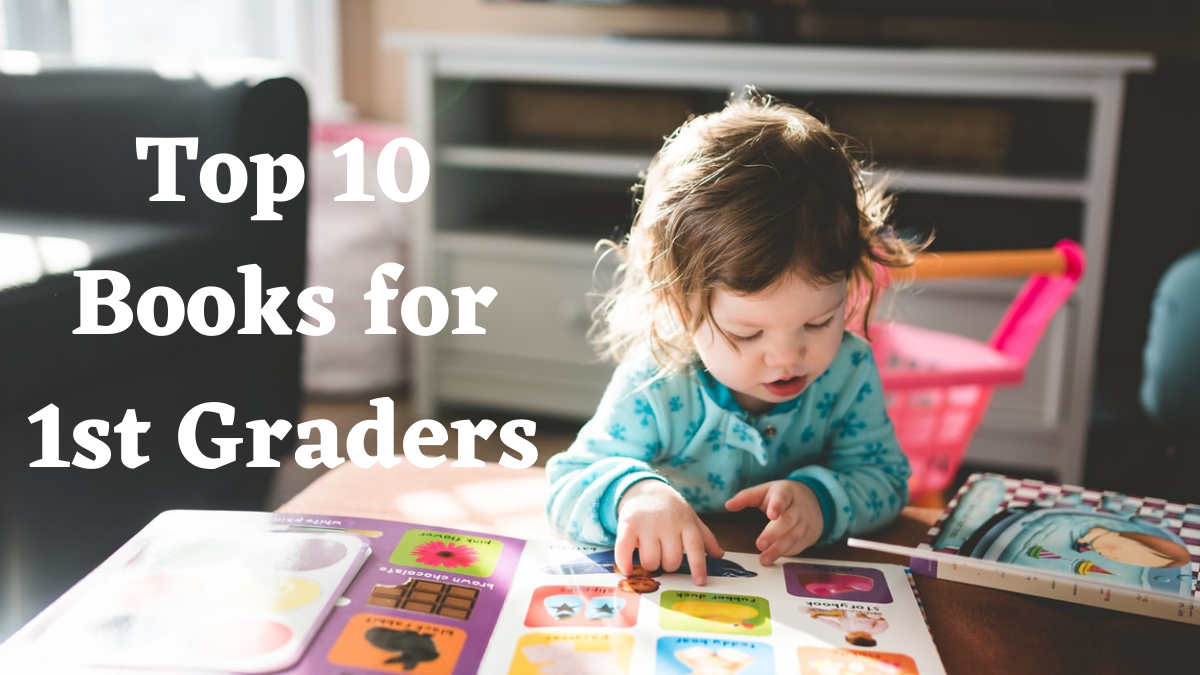 The 1st grade is when children taste what school is actually like, and they start learning properly. After the basic lessons and all the fun and naps in kindergarten, they are actually going to learn and start on their educational journey. This is the perfect time to upgrade your child’s book collection. Reading books is an amazing habit, and every child has to develop it as young as possible. Start with books with mostly just pictures and very few words and gradually move on to books with a lot more words. The books your child reads should be upgraded as they grow older. First grade is one of the most important times of a child’s life as this is when he gets a taste of education and learning. So, it is important that the books he reads also make him think and ask questions instead of just looking at pictures. We have put together a list of the top 10 best books for first graders to read. These books contain a lot of beautiful pictures but will also have slightly more words and better stories. So, dig in and find the perfect book for your child.

1. The Tale of Peter Rabbit

Beatrix Potter is one of the most well-known children’s writers, and her wonderfully designed Tales have captivated our imaginations for almost a century. Few folks, however, are aware of the interesting lady Beatrix was or the accomplishments she made during her career, which occurred during a time when aspiring women were not allowed to develop. Beatrix Potter’s The Story of Peter Rabbit is the first series of wonderful children’s tales. There are twenty-three “little Tales” about forest creatures in this collection. Perhaps the most famous of all the stories is about a mischievous little rabbit named Peter. It does not appear to have aged as much as many others. All small animals will be familiar to most kids today, and the vegetable garden backdrop is ageless. Flopsy, Mopsy, and Cotton-tail, Peter’s three other siblings, reside with him. The story is beautifully illustrated and is quite a delight to read.

Michael Bond was originally drawn to a lonely teddy bear on a really empty store rack on Christmas Eve in 1956. The BBC staffer was so taken with the plush bear that he brought it home to his wife. They named the doll Paddington after a London terminal near their home, and Bond was inspired to create a few charming stories about the bear’s travels, beginning with A Bear Called Paddington in 1962. The first book in the Paddington franchise, A Bear Called Paddington, describes the journey of a juvenile bear that has traveled to London from Dark Peru. When he arrives, he is greeted by the Brown family, who are more than glad to accept him in, and the adventure begins. The story was excellent, as smooth and delightful as vanilla creme. And Paddington and the Browns are the sweetest, most charming bunch of characters you’ll ever meet.

3. Alexander and the Terrible, Horrible, No Good, Very Bad Day

Alexander believes it will be a terrible day when he gets up with bubblegum in his hair. He knows it’s going to be even worse than he expected when he slips on his skateboard near his bed and drops his sweater in the sink. His brothers discover fantastic treasures in their cereal boxes while he discovers cereal. Mom forgets dessert while his best buddies got exquisite sweets in their lunch boxes. The day keeps on getting worse, from being squeezed in the van on the way to class to lima beans for dinner and to seeing a couple of kisses on TV. It’s enough to entice him to relocate to Australia. Judith Viorst is a well-known and prolific children’s book author who writes so that kids can recognize themselves in her novels. The book is hilarious and shows how children react to everyday things that are normal for us. The book is also really well illustrated, which makes it a lot more enjoyable.

4. When We Were Very Young

First grade is the perfect time to introduce your child to a little bit of poetry. And this book will be perfect for that. When We Were Very Young is an anthology of poems by A. A. Milne that is hilarious and endearing. Winnie-the-Pooh is initially introduced to us by one of them. His lines have a charming simplicity to them, mixing the worlds of truth and fascinating make-believe. Keen readers will also notice the first mention of the Best Bear, which was published two years before Winnie-the-Pooh. Ernest Shepard’s charming pictures, which have thrilled many readers, are a wonderful companion for this famous poetry. These poems have been read and re-read by hundreds of youngsters, and they may still be found in every library today.

Young readers have been crying with laughter at the antics of this literal-minded yet lovely maid since Amelia Bedelia first appeared in 1963. The original text, page layout, cover, and color palette are restored in this unique fifty-anniversary edition of the first book. What else is similar? Among other things, there’s the dressed chicken, cleaned furniture, and that delectable lemon meringue pie. There are eight more pages of behind-the-scenes drawings, images, and facts about the origins of this legendary character, the writer, the illustrator, and Amelia Bedelia’s adventures over the years. It’s still difficult to dislike Amelia Bedelia. She is such a sweet, unintentionally humorous, and sincere person. It’s difficult to be angry with her for doing what she thought was right, even if she makes a shambles of things.

Aesop was a captive who lived on Samos in the 6th century B.C., according to Herodotus. For generations, his ethical creature fables have amused both children and adults. Milo Winter’s original paintings grace this stunning full-color edition of Aesop’s fable. The graphics are just stunning. Almost every fable includes a drawing, whether modest or enormous enough to span the entire page. You will be quite pleased with Aesop as an author and with all of the tales after reading this anthology of stories. From the tortoise and the hare to the countryside mouse and the urban mouse, he infuses each story with meaning and a valuable life lesson. The book is a timeless classic and has been around for ages. In fact, many of you might already have a copy at home from when you were little.

7. The Little House in The Big Woods

The Little House in The Big Woods is one of the most famous children’s book series in the world. It is very popular among kids and parents, and teachers. This story opens in 1871 in a small log cabin on the border of Wisconsin’s Big Woods, told from the perspective of four-year-old Laura. Laura, her father, mother, sisters Mary and Carrie, and their faithful dog, Jack, all live in the small house. The family’s existence as a settler is sometimes difficult because they must raise or catch all of their own food as they prepare for the chilly winter. Laura and her family are looking forward to celebrating Christmas with handmade toys and snacks, springtime planting, harvesting, and making their first excursion into civilization. Laura and her sisters are warm and comfortable in their little abode every night, with the lovely sound of Pa’s fiddle lulling them to sleep. This book has been cherished by generations of young readers. The stories are very heart-warming and also beautifully illustrated.

Clifford, the Big Red Dog, is a collection of novels that you cannot go wrong with. These stories are incredibly lovely and illustrate the importance of friendship. The stories are addictive, and it’s hard not to adore Clifford and his friends. Clifford is such a big, funny, adorable dog that it’s no surprise that this is a classic! This novel is all about anticipations. Clifford does everything a normal dog does, but on a larger scale and with different results (for example, he likes to chase cats, he scares a lion at the zoo). What makes the book so enjoyable is the frequent reversal/twisting of assumptions. This is how it all started: Norman Bridwell launched his first Clifford book in 1963, and children have loved him ever since. He’s a cute dog with a lot of kid appeal because of his well-intentioned blunders. Emily Elizabeth’s and everyone’s favorite big red dog is Clifford!

This is a complicated story about two individuals from quite different backgrounds. Introvert vs. extrovert, good vs. evil Democrat, Republican, etc.  It also reflects the generational divide between those fixed in their ways and those who are prepared to branch out and try something new. There is an immediate, almost uncomfortable collision between the two major protagonists in this narrative, no matter how you deconstruct it. Regardless, you can’t help but keep turning the pages as you immerse yourself in this story, no matter how unsettling it may be at the time. You can relate to either of the characters and possibly a little bit of both. The plot revolves around one man, Sam I Am, attempting to persuade an elderly politician to venture into undiscovered worlds. The unnamed elderly guy appears to be old and set in his ways, relying on years of wisdom and, paradoxically, folly as he constructs barriers between himself and Sam.

The Little House, a heartbreaking story about a beautiful country hamlet that becomes absorbed by the city that rises around it, awarded Virginia Lee Burton the Caldecott Medal in 1943. She feels sad when she is surrounded by the unclean, noisy city’s daily grind since the house has an engaging personality of windows and doors and even the emotions of a person. She missed the daisies in the field / and the moonlight dancing apple trees. Fortunately, the story has a happy ending, as the house is returned to her homeland. This story has all the essential elements for a great children’s book.