The Soften Model of Non-Verbal Communication 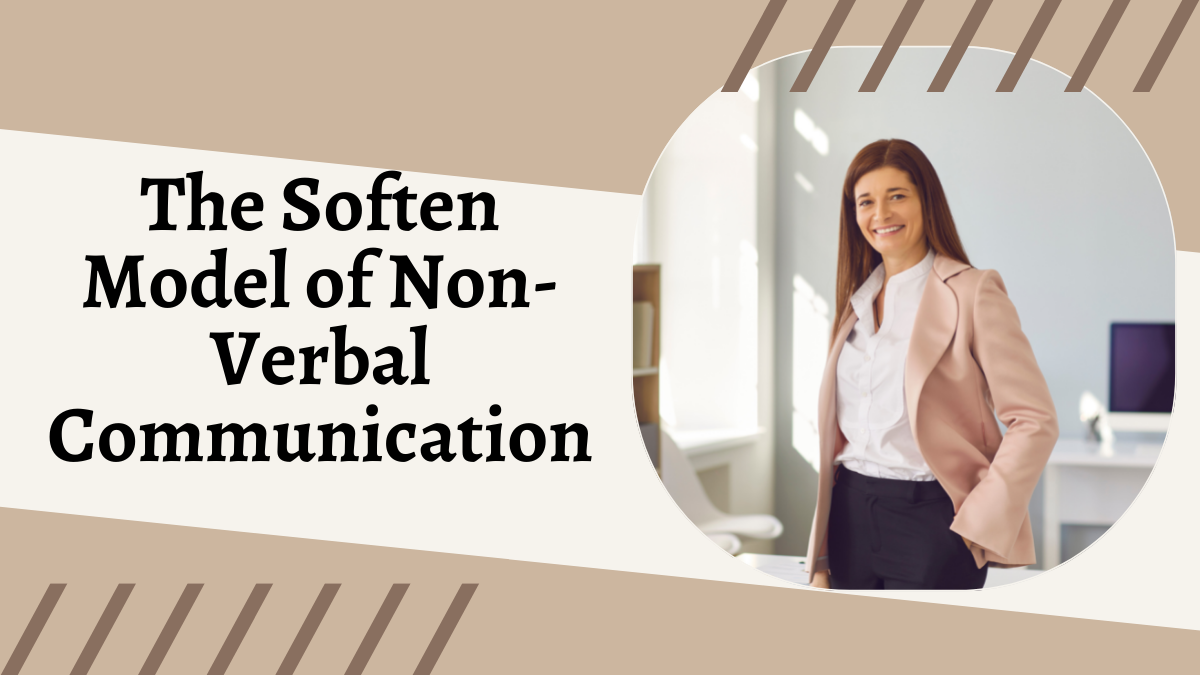 Non-Verbal Communication consists of symbols, gestures, and eye contact. These symbols do not necessarily refer to words, but they convey meaning. They may also be used to show enthusiasm for a particular topic. This is the reason why body language is so important in relationships. However, people must remember that nonverbal communication is not limited to verbal expressions. There are also cultural differences that can cause miscommunications. In China, for example, silence is preferred to verbal communication.
When we say ‘communication,’ we usually mean ‘what we say,’ or the words we use. Interpersonal communication, on the other hand, is much more than the literal meaning of words and the information or message they communicate. It also includes nonverbal behaviors that convey implicit messages, whether they are deliberate or not.
Facial expressions, voice tone and pitch, body language gestures (kinesics), and physical space between communicators are all examples of nonverbal communication (proxemics).

What Is Non-Verbal Communication?

The technique of transmitting and receiving messages without using words, either spoken or written, is known as nonverbal communication or manual language. Nonverbal action can emphasize sections of verbal communication in the same way that italicizing emphasizes written material.
Psychiatrist Jurgen Ruesch and author Weldon Kees coined the phrase nonverbal communication in 1956. For decades, nonverbal messages have been regarded as an important element of communication. “The lineaments of the body do expose the disposition and inclination of the mind in general,” according to Francis Bacon, “but the motions of the countenance and parts do not only so, but do further disclose the present humor and state of the mind and will.”
Nonverbal communication is important in our lives because it improves a person’s capacity to relate, participate, and form meaningful interactions in daily life. People may create deeper relationships with others if they have a better knowledge of this form of communication.

What Are the Types of Non-Verbal Communication?

Expressions on the Face

A large amount of nonverbal communication is communicated through facial expressions. Consider how much information a grin or a frown may communicate. Even before we hear what they have to say, the look on a person’s face is generally the first thing we notice.
While nonverbal communication and behavior might differ significantly across cultures, the facial emotions for happiness, sadness, anger and fear are universal.

Without using words, deliberate actions and signals are a vital way to transmit meaning. Waving, pointing, and using fingers to signify numerical amounts are all common gestures. Other gestures are arbitrary and culturally based.
In courtroom contexts, lawyers have been known to exploit numerous nonverbal signs to attempt to affect juror opinions. An attorney might glance at his watch to insinuate that the opposing lawyer’s case is tiresome, or he might even roll his eyes at a witness’s evidence in an attempt to discredit him or her.
Because nonverbal signals are regarded as so powerful and impactful, some judges have imposed restrictions on the kind of nonverbal actions that can be used in the courtroom.

Vocal communication that is distinct from actual language is referred to as paralinguistics. This covers things like voice tone, volume, intonation, and pitch. Consider how important voice tone is in determining the meaning of a sentence.
Listeners may understand praise and enthusiasm when spoken in a strong tone of voice. The same words spoken in a cautious tone of voice could be interpreted as disdain and lack of interest.
Consider how changing your tone of voice can alter the meaning of a sentence in a variety of ways. When a buddy asks how you’re doing, you could respond with the conventional “I’m fine,” but the way you utter those words can reveal a lot about how you’re truly feeling.
A frigid tone of voice may imply that you aren’t feeling well, but you don’t want to talk about it. A cheerful, upbeat tone of speech will indicate that you are doing fairly well.

The way you stand and move can also express a lot of information. Since the 1970s, body language research has advanced greatly, but popular media had focused on the over-interpretation of defensive postures, arm-crossing, and leg-crossing, particularly when Julius Fast’s book Body Language was published.
While nonverbal gestures such as these can reveal sentiments and attitudes, research reveals that body language is significantly more subtle and less decisive than previously thought.

People frequently express their desire for “personal space,” which is a kind of nonverbal communication. Social conventions, cultural expectations, situational considerations, personality characteristics, and level of familiarity all determine the amount of distance we require and the amount of space we feel as belonging to us.
When having a casual chat with another individual, the amount of personal space required often ranges from 18 inches to four feet. When speaking to a group of individuals, however, a personal distance of 10 to 12 feet is required.

Gaze with Your Eyes

Nonverbal communication relies heavily on the eyes, and nonverbal activities like glancing, staring, and blinking are common. When people come across people or things they enjoy, their blinking rate rises, and their pupils dilate. Looking at someone else can convey a variety of feelings, including animosity, intrigue, and attraction.
People also use eye look to judge whether or not someone is telling the truth. Normal, steady eye contact is frequently interpreted as an indication that someone is telling the truth and can be trusted. Shifty eyes and an inability to sustain eye contact, on the other hand, are frequently interpreted as signs of deception or lying.

Nonverbal communication is also influenced by our choice of color, dress, haircuts, and other variables affecting appearance. Consider how many rapid judgments you make about someone based on his or her appearance. First impressions matter, which is why job seekers should dress appropriately for interviews with potential employers, according to experts.
Researchers have discovered that how people are seen, as well as how much they earn, is influenced by their appearance. According to a 1996 survey, attorneys who were judged as more handsome than their peers paid about 15% more than those who were not.
Culture has a significant impact on how people perceive others’ attractiveness. While thinness is prized in Western countries, full-figured bodies are associated with better health, wealth, and social standing in some African communities.

In general, men and women both exhibit strong gender-related behavior. Women are more likely to use their nonverbal signals than do men, and they also differ in their levels of trust. In other words, if they are more dominant and show greater nervousness, they are more likely to be untrustworthy. Conversely, if they are more vulnerable, they will be less likely to show their emotions.
The F1 score was associated with the highest level of trustworthiness, while F2 scores were associated with lower levels. This difference indicates that these nonverbal features are not intrinsic ingredients for trust grading. In fact, they may be the least important. But these features are associated with perceived dominance and trustworthiness. Therefore, both men and women have a tendency to use them. The majority of respondents believe that these nonverbal cues are unconsciously sent by their partners.
The results of this study show that the number of nonverbal features associated with trust is positively correlated with a positive F1. On the other hand, negative coefficients were associated with low trust. The same study found that the amount of gaze, forward leanness, and quickness of speech are positive indicators of trustworthiness. In other words, these signals can be used to assess the trustworthiness of a relationship.

What Is the F1 Score in Soften Technique?

The F1 score was the highest, at 59%, but this result was not significant when it was analyzed as a whole. Even though the F1 score was the most accurate, the averaging of the scores resulted in lower accuracy. It was also important to note that the other nonverbal features of trust were not directly associated with dominance or composure. The averaging of the results revealed that dominance and trustworthiness are not easy to predict.
The F1 score had the highest correlation with trust. The lowest correlation was with nerves and dominance. The F1 score was the highest, with a 0.7-0.9 ratio. The F2 score was at 59%, while the F3 score was the lowest with a 0.8-0.9 ratio. Furthermore, the sensitivity to the F1 score was low, and the overall accuracy was low.
Nonverbal communication can be both intentional and unintentional. Because we can’t see ourselves to know what we’re doing, facial expressions are particularly difficult to regulate. As a result, we may confuse communication by attempting to transmit one message consciously while unintentionally communicating another.
Interpersonal communication is made more difficult by the fact that it is nearly impossible to precisely analyze a gesture or expression on its own. Nonverbal communication is made up of a variety of expressions, hand and eye movements, postures, and gestures that should be interpreted in conjunction with speech.

What Is SOFTEN Technique?

The SOFTEN approach involves nonverbal behaviors to reduce any worry that the interactants may have when starting a new connection.
S – Smiling
O – Open posture
F – Forward lean
T – Taking notes
E – Eye contact
N – Nodding
SOFTEN includes all of the fundamentals of good body language and is really simple to learn. You can instantly recollect the principles and put them into action in any situation. This, I’ve discovered, can completely alter the tone of a conversation. So, the next time you’re in a social scenario, keep the SOFTEN approach in mind and employ it.
People have far less conscious control over their nonverbal communications than they do over what they say. This is partly due to the fact that nonverbal communication is more emotional in character and thus more instinctive.

If there is a discrepancy between the two, you should most likely trust the nonverbal signals rather than the words utilized.
A lack of nonverbal communication could be seen as a signal that the speaker is carefully regulating their body language and attempting to conceal their genuine emotions.

It’s a crucial question because many communication specialists feel that nonverbal communication speaks louder than words.
Now, I don’t think that this is always true, but it is in many important exchanges, such as initial impressions. If your nonverbals indicate something unfavorable about you, the other person will rapidly get a negative impression of you.
The issue is that there is a lot of advice on how to use effective body language out there. It can take years to master because there are so many signals, postures, mirroring, and other things to learn. So the SOFTEN technique plays a huge role in helping people out with their nonverbal communication skills.