The Average Cost of Living in New York State 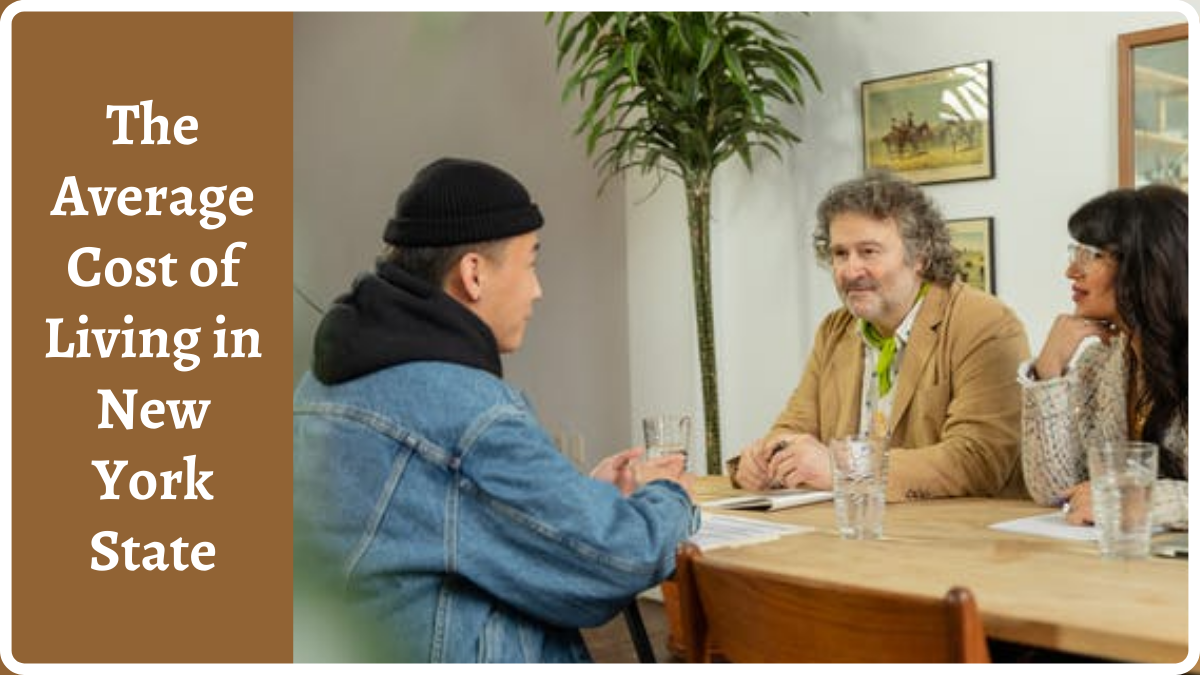 The architectural designs of the city’s buildings vary, with wooden structures fashioned in the shape of a sloping roof or bunk boxes. The city also features buildings of more modern designs, such as skyscrapers like the Empire State Building, one of the city’s tallest structures.

Despite this, the city has various issues, including the spread of crime, the phenomena of narcotics, discrimination, poverty, and housing, which is one of the most severe issues, with 65 percent of the city’s population living in rented hotels and flats.

Today, we’ll get to know the Cost of Living in New York. So, Let’s Get Started.

Approximately two-thirds of New Yorkers rent their homes, and renters in all five boroughs spend more than 30 percent of their income on housing costs on average.

The average rent for an apartment in Manhattan in January 2020 was a stunning $4,210—by far the most costly in the country and nearly three times the national average of $1,463. Brooklyn and Queens were the most expensive, at $2,936 and $2,412.

Each of the three boroughs is more expensive than Chicago, Washington, D.C., and San Diego.

The further you get away from Manhattan, the lower the housing costs. As a result, expect prices in neighborhoods such as DUMBO (Brooklyn) and Long Island City (Queens), which are right across the river from Manhattan, to be higher than the borough averages.

The median single-family home purchase price in all five boroughs in January 2020 was $571,000, which means that half of the homes sold for more than that price and half sold for less.

The average price is higher than the median price because Manhattan has a small fraction of multi-million dollar transactions each year that raise the average but are irrelevant to the usual buyer.

Single-family homes in Manhattan are exceedingly unusual and are more likely to be found in less densely populated city areas, such as Staten Island.

The rest of the city’s housing stock comprises co-ops and condos, with a median sale price of $537,000 per unit. (While these properties are less expensive to purchase, owners must consider the long-term expense of additional monthly fees.)

While these costs are higher than the national median home price of $245,000, buyers exploring outside of Brooklyn and Manhattan can discover less expensive properties than in other high-cost areas such as Boston and Los Angeles.

Renters in New York City may pay less for utilities because heat, water, and sometimes electricity are frequently included in their rent, particularly in older buildings. New York requires that hot water be included in the rent. Older buildings generally have only one heating system and one electric meter, preventing landlords from charging tenants for individual consumption.

If you pay your electricity bill, it will be approximately 35-40% higher than in the rest of the country, although other utilities are less expensive. This means that renters or homeowners who pay for all of their utilities should anticipate a total bill of roughly $136, less than the national average of $160.

The lively restaurant scene in New York City is a focal point of the city’s social life. Residents of New York City spend 130 percent more on dining out than the national average.

They not only dine out more frequently, but the average cost of a full-service restaurant lunch in NYC is $46.14, roughly $10 more than the rest of the country. The most costly restaurants are in Manhattan, and however, thousands of less expensive dinners are available throughout the five boroughs.

The cost of groceries varies significantly across the city and has little relationship with neighborhood rent or housing prices. According to Numbeo’s cost of living calculator, the average New Yorker spends $477 per month on groceries, more than any other U.S. metropolis.

Commuters can save money on transit by purchasing an unlimited monthly pass for $127. The monthly Metrocard in New York City is slightly more expensive than comparable cards in other transit-heavy cities such as Boston ($90), San Francisco ($98), and Washington, D.C. ($121+). However, New York offers nearly 5,000 miles of bus and subway systems, which might be considered a decent value.

The NYC Ferry offers another option for the half-million New Yorkers who live near one of the ferry terminals. Several lines service all five boroughs and cost $2.75 each trip (except for the Staten Island Ferry, which is free!).

Parking can be an expensive expense for the minority of New Yorkers who own a car. Monthly garage parking in Manhattan costs $300-$900 per month, while it costs $150-500 in Brooklyn. Prices in the other boroughs are lower, and street parking is more plentiful.

Gas prices in New York City fluctuated from a high of $3 per gallon to a low of $2.25 per gallon between June 2019 and June 2020. These costs are around 25 cents per gallon higher than the national average over the same period but less than the Los Angeles average.

Manhattan workers earn much more than the national average wage of $61,568. The average weekly rent in Manhattan is $3,152, or over $164,000 per year. The highest-paying jobs are found in finance and technology. Wages in the other four boroughs trail behind the rest of the country, hovering around $53,000.

New York has the country’s sixth-highest healthcare spending. In 2018, the average person’s medical expenses were $6,734. Here’s a breakdown of how the money was spent:

Taxes are another factor contributing to New York’s high cost of living. At 8.82 percent, the Empire State has the ninth highest income tax rate. You’ll also have to spend $3,755 in property taxes per year, $1,917 more than the national average.
Sales taxes will also eat into your earnings. The overall tax is 4%, and many counties levy an additional tax on top of that. So, depending on where you do most of your shopping, you could pay 8.87 percent in sales tax.

If you have any money left after paying for rent, transportation, and food, you should try to have fun. It will, however, come at a cost. According to Value Penguin, the average price of admission to a movie in Midtown is $15.25.

New York is also well-known for its sports teams. A Brooklyn Nets or New York Knicks game will set you back an average of $87 and $190. Baseball fans can attend Yankees and Mets games. According to Statista, the average Mets ticket for the 2018 season is $27.60, while the average Yankees ticket is $47.62.

New Yorkers do have at least one cheap entertainment option. On a typical Saturday night, train stations throughout the city transform into stages for various musical events. There’s likely to be something you like, whether classical, jazz, hip hop, or the blues.

How Much Money Do I Need to Live in New York?

According to MIT, a single person in New York State requires a salary of $39,863, while a family of four requires double that amount. These estimates, however, do not cover savings, investments, or an entertainment budget. According to Business Insider, earning $95,724 per year will make you feel more financially secure.

In New York City, What Is Considered a Respectable Salary?

The most costly place to live in the state is New York City. The cost of living in Albany is 138 percent greater, and it is 165 percent higher in Buffalo.

To cover your basic needs in Manhattan, you’ll need at least $45,442 a month as a single person and more if you have children. However, if you want to own a modest property in any five boroughs, you must earn at least $103,887 per year to meet the mortgage payments.

Although $100,000 is more than the median household income in New York City, your salary will be swiftly depleted by expenses. It’s anticipated that you’ll only take home $69,708 after taxes.

Renting an apartment costs an average of $3,074, leaving you with approximately $2,735 to meet the remainder of your obligations. Given that New York City residents spend more than $550 per month on healthcare and $820 per month on food, things may become a little tight if you have children or student loan debt.

Is It a Decent Place to Live in New York?

Is Living in New York So Expensive?

Yes. New York City is widely regarded as the most costly city in the United States. The Numbeo cost of living index bases its calculations on New York City pricing, giving it a score of 100 out of 100 and expressing other cities’ prices as a percentage relative to what you would pay in New York.

Overall, New York City is the most expensive city in the United States and one of the most expensive cities on the planet (although not as pricey as Hong Kong, Tokyo, or Zurich). But for the hardworking dreamers who make it in the Big Apple, being at the center is priceless. Private rooms in shared homes are more economical at Bungalow than solo accommodation options in the same neighborhoods. Wifi, utilities, and monthly cleaning are all set up before you move in to make co-living as easy as possible. Unlike other types of shared housing, Bungalow vets all residents and matches you with roommates who share your living preferences and interests.