The Average Cost of Living in Hawaii 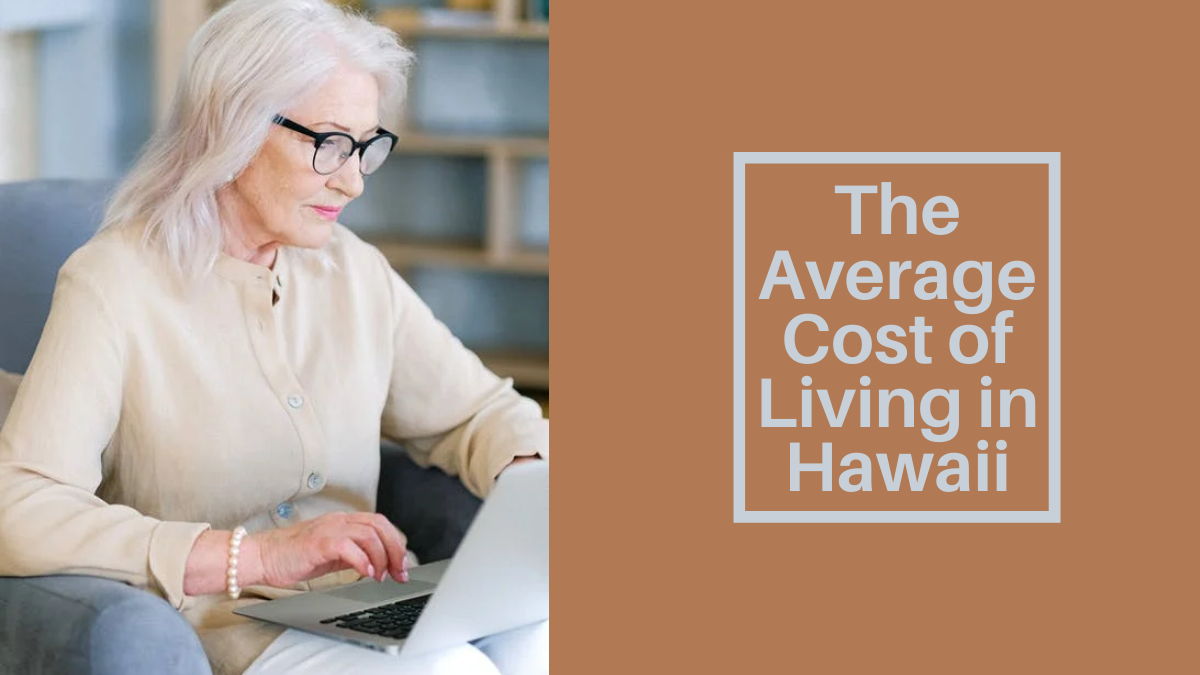 Are You Thinking About Relocating to Hawaii?

It’s lovely here, surrounded by a big ocean, perfect weather, and rich culture, but paradise comes at a price — a price so high that it can be a deterrent for many people. Hawaii is a trophy destination for far too many people, a once-in-a-lifetime or never-in-a-lifetime event. According to some estimates, the average cost of a week in Hawaii for a family of four is around $1,899 per person. Postcard-perfect white sand beaches, mountainous scenery, and the crystal blue Pacific Ocean are hard to fathom as everyday realities for some.

Here’s all you need to know about Hawaii’s cost of living, as well as firsthand accounts.

According to some research, a salary of over $122,000 is required to live comfortably in Hawaii.

(Of course, living standards differ from one individual to the next, and it all relies on your degree of “comfort.”) According to the Massachusetts Institute of Technology’s (MIT) Living Wage Calculator, a living wage for an adult in Honolulu is $16.59 per hour. If a couple has two children, each adult must earn $17.70 per hour.

According to Payscale, the average pay in Honolulu, the island’s capital, is $66,000, but the state has one of the highest income tax rates in the U.S., with the top tier at 11%. According to the Bureau of Labor Statistics, the average U.S. salary in the third quarter of 2020 is $51,688 ($994 weekly). According to a January 2021 report by Indeed.com, the typical pay in Hawaii ranges from $33,965 per year for a Customer Service Representative to $96,620 per year for Travel Nurse. However, the enticing aspects of Honolulu outweigh the possibility of lower salaries and a high cost of living for many people.

In Hawaii, What Is Considered Low Income?

In 2020, the United States Department of Housing and Urban Development (HUD) determined that an individual residing on Oahu has a “poor income” of $93,000. That’s incredible when you consider that the national average wage for a full-time employee is roughly $48,672.

Hawaii’s maximum income tax rate of 11 percent is high when compared to the national average, but the state also boasts the lowest effective property tax rate, at just.27 percent per year. Businesses must pay a 4% general excise tax on all business activities, with a 0.5 percent override for Honolulu County.

What Is Hawaii’s Average Living Wage?

To live comfortably in 2020, the average person will need to earn $17.63 per hour, according to the Hawaii Department of Business, Economic Development & Tourism’s (DBEDT) self-sufficiency income guidelines. Housing, food, transportation, healthcare, and other expenses would be covered.

The Economic Policy Institute and the National Low-Income Housing Coalition, for example, estimate the living wage to be $26-$29 per hour. Hawaii’s minimum wage, on the other hand, is $10.10 per hour, or $20,200 per year. While this is more than the federal minimum wage of $7.25, it is far from sufficient to be deemed living. The rent and home prices in Hawaii are two indicators to consider when determining the high cost of living.

Honolulu rents for an average of $2,257 per month, and Kahului residents pay $1,784 per month. In terms of property pricing, 82 percent of homes cost more than $357,000, significantly higher than the national average.

This makes renting an apartment, much alone covering other living expenses, unfeasible for someone earning the absolute minimum.

You should budget at least $3,000 per month. You can always live outside of Honolulu’s core or even consider the other Hawaiian Islands – Hilo, on the Big Island, is about 49 to 56 percent less expensive than Honolulu and offers a laid-back and pleasant small-town vibe that may be more appealing than the city’s hustle and bustle. If you’re seeking to buy, the median sales price of a single-family home in December 2020 was $870,000, a new high. On Oahu, the median condo sale price is $455,000. Despite the high prices, home and condo sales on Oahu continue to increase. Alternatively, purchasing a plot of land and building your own home may be more cost-effective, depending on your area and general contractor.

• Hawaii citizens pay the highest monthly energy rates in the U.S. regarding utilities.

According to the U.S. Energy Information Administration, the average monthly energy cost in the United States is $168.13.The national average is $117.65; therefore, this is $50.48 more expensive. Despite the high cost of electricity, the sun shines 8 percent more in Hawaii than in other states, providing potential for low-cost solar energy. Hawaii was the first state to announce a 100% renewable energy goal by 2045.

Let’s say you decide to reside somewhere else than Honolulu’s bustling downtown region; you’ll need to factor in the cost of owning and operating a vehicle. In Honolulu, gas costs around $3.16 per gallon as of January 2021. At $2.75 a ticket, taking the bus or, in Oahu, TheBus, maybe a more cost-effective mode of transportation. However, it may not be an enticing daily trip. If you work in downtown Honolulu or Waikiki, you’ll almost certainly have to hire a parking place if your employer doesn’t supply one. Parking costs usually vary from $100 to $200. Those who live in a condo may be required to rent a stall at a similar price, depending on the association’s bylaws. You might be able to use the Honolulu Rail Transit to work if you reside in Kapolei or on Oahu’s Ewa side.

Out and about, with a cup of coffee grown right here in the United States. However, because supplies are imported from the mainland, Hawaii is the most costly place in the country to buy groceries. According to the Missouri Economic Research and Information Center’s 2020 Quarter 3 study, Hawaii’s groceries are costly. Hawaii was ranked 196.3 on a nationwide rating of 100, while California, Washington, and Oregon were placed 138.5, 111.3, and 134.6, respectively. On Oahu, for example, a gallon of whole milk can cost $8.99, with the cheapest gallon costing roughly $5.50 at Costco. Broccoli costs $3.79 per pound, while bulk carrots cost $3.49. Yes, while shopping local is encouraged, Hawaii-grown mangos cost around $6.99 per pound. It will cost around $6 for four rolls of toilet paper. Eating out can rapidly add up. Breakfast will set you back $8 to $12, lunch will set you back $8 to $15, and dinner will set you back $15 to $30. (or more). However, because there is such a wide price range, many individuals will buy a plate lunch (white rice, macaroni salad, and a meat entrée such as loco moco or teriyaki beef) and store it for lunch and dinner, or split the plate in half with a buddy.

Are you prepared for some fantastic news?
Hawaii has one of the lowest property tax rates in the country, at 0.35 percent. The income tax rate varies between 1.4 percent and 11 percent. Hawaii is attractive to seniors because it exempts Social Security retirement benefits and public pension income from state taxes. Income from private pensions and retirement savings accounts is fully taxed. According to a Commonwealth Fund report, Hawaii residents who participate in employer-sponsored health coverage plans pay some of the lowest costs in the country. In Hawaii, one of two organizations often offers insurance: Kaiser Foundation Health Plan Inc. or the Hawaii Medical Service Association (HMSA).

According to this analysis, the potential cost to employees in Hawaii is around 36% of the national average, at $4,664 (8 percent of median salary), compared to a nationwide cost of $7,240. (12 percent of median income). In 2017, Hawaii had the lowest single-coverage employee expenditures in the country, at $675, which was less than half of the national average of $1,415.

Hawaii is the healthiest state in the U.S., having won the title nine times since 1990.

Low levels of air pollution, less mental stress, and many primary care physicians can all contribute to low obesity and smoking rates.

A budget for a family of four living in a single-family home would look like this:

* Costco is a great place to shop.

* Shop at NEX if you or a family member is in the military.

* In Hawaii, Costco has the cheapest petrol.

* Electric vehicle owners are eligible for incentives such as free street parking and usage of HOV lanes.

Where in Hawaii Can You Reside for the Least Amount of Money?

The cost of living in Hawaii varies greatly depending on the cities and islands you visit.

The Big Island (Hawaii’s largest island) is the cheapest, yet the typical household income remains around $52,000. Several inexpensive cities can be found on the Hawaiian islands. When looking for a location to reside, stay away from tourist districts and, if possible, the seaside. The cost of living in these areas is frequently high, making them unaffordable.

* Hilo, on the Big Island’s east side, is famed for its easy access to hiking trails and massive waterfalls.

A one-bedroom apartment costs $1,000 on average, making it significantly less expensive than Honolulu. If you decide to buy a home here, you may have to pay more for property insurance because of the recent Kilauea eruptions.

* The median household income in Kaunakakai is 51,714 dollars, with a median home price of $284,600. As a result, the neighborhood is far more inexpensive than nearby cities, where housing prices begin at over $300,000. Because of its distant location, it has a low cost of living. On the island of Molokai, Kaunakakai is not known for its career prospects, and it’s perfect for distant professionals who wish to stay in touch with nature.

* Hana is a town on the Hawaiian island of Maui.

While it is physically close to the loveliest portions of Maui, the travel to the city is notoriously long, taking around 2.5 hours. There are 617 hairpin curves on the Road to Hana, 59 one-lane bridges, and a 25 mph speed limit. The drive is breathtaking, with waterfalls and jungle all along the way. With a typical rent of $941 and an average property price of $459,000, this is a driver’s paradise.

So, Why Is the Price So High?

There are several reasons for Hawaii’s high cost of living, but the quick answer is that we’re surrounded by water. Almost everything we eat has to be shipped or flown in. Hawaii is also a popular area for the wealthy to acquire real estate, driving up housing costs. Another critical problem is that utility bills, such as electricity, are incredibly high due to the warm environment.

There is, as with so many things in life, a trade-off. While the cost of living in Hawaii may appear to be prohibitive at first, it may be overcome with a bit of soul searching and a serious examination of your lifestyle. When moving to Hawaii, you may need to make certain compromises if you’re used to a specific level of living. But, if you live near the ocean, a warm climate and a healthy island ecosystem are essential to you. Giving up that expensive automobile or eating out less may not seem like a sacrifice. It’s all about finding a balance between your principles and figuring out what works best for you and your family.