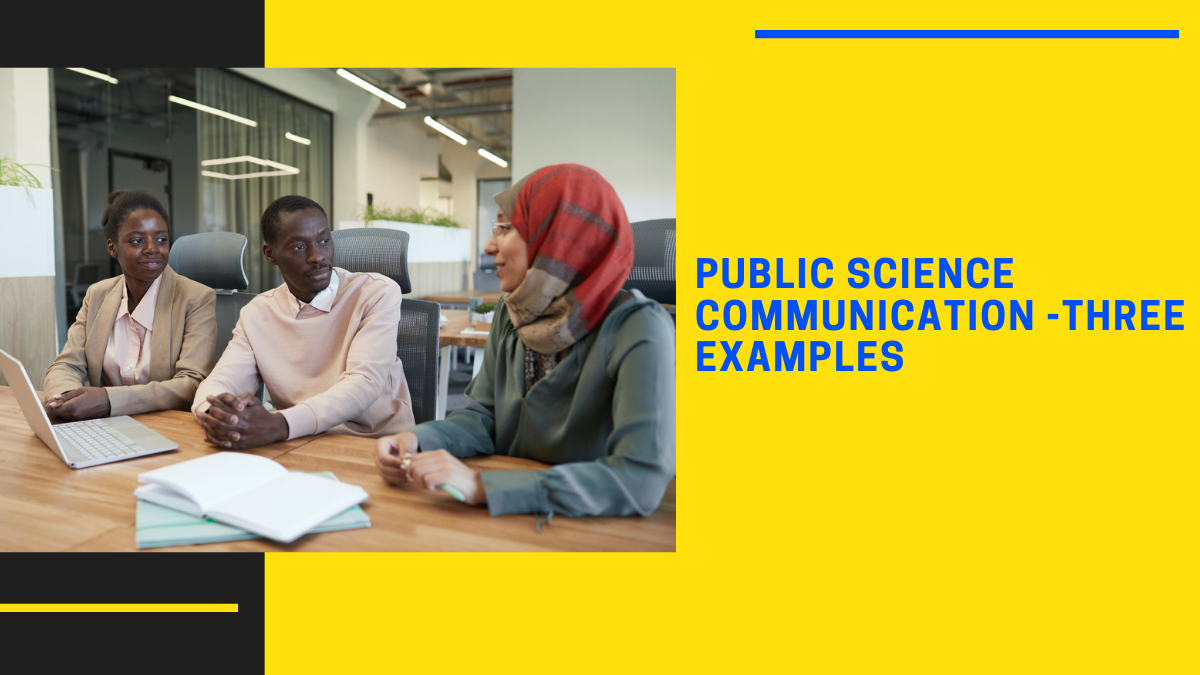 The state of public science communication hasn’t always focused on engaging the public with scientific information. Historically, museums have focused on displaying artifacts and describing them with labels. While this may work for a narrow audience, it doesn’t necessarily work well for the general public. Today, museums are increasingly focusing on making their environments more interactive to engage people with the technical details and promote critical thinking.

Scientists are increasingly being acknowledged as having a responsibility to communicate science to the general public, but how can they gain these skills? Scientists are well-versed in research methodology, analytical abilities, and the ability to connect with other scientists, but they rarely receive formal training in how to communicate scientific concepts to a lay audience.

Though most people agree that it is critical for scientists to be able to communicate with non-scientists, many working scientists lack this capacity, which is likely owing to a combination of increased specialization over time and a lack of formal science communication training.

What Is Public Science Communication?

Professional scientists and academics, as well as journalists, writers, and university marketing and communications teams, are all examples of science communicators. They all use their communication abilities to make science more accessible to the general population. Science communication has been a higher priority in the scientific community in recent years, owing to rising disinformation and stagnant research resources.

What About Scholarly Publications? Is this Considered Public Science Communication?

Not really, at least not for the purposes of this guide. Scientists publish millions — if not billions — of journal articles each year. The majority are behind paywalls, and those that aren’t can’t be easily understood by the general public. To put it another way, it’s an uncommon piece of academic writing that also serves as a means of communicating science to the general public.

Simultaneously, the public transmission of this science — that is, published articles and books — is frequently locked behind a prohibitively expensive paywall. Whatever the virtues of this system, the scientific community must continue to communicate in order to justify the investment of their most important stakeholders: the general public.

Scientific education is valuable in and of itself, and much science of communication is created solely to inform the public about what we know — and don’t know — about life, the cosmos, and everything. Science education can also strive to enhance public participation in today’s most pressing concerns.

It’s important to educate the general people, but it’s much more important to educate those who make decisions. While we like to pretend — or hope — that our leaders are well-informed about the most pressing issues confronting us, the reality is far less exciting. Most leaders in most countries have a skewed understanding of science (to put it charitably).

One clear goal of science communication, albeit it may be called a “stretch goal,” is to promote improved knowledge of science among policymakers. This, in theory, may lead to evidence-based public policy and decision-making across the board. It is important for the future of our economies, environments, and society that the next generation of gifted people choose a career in science (including social sciences).

How to Communicate Public Science to Laymen?

We all agree that scientists must be skilled communicators, yet explaining science to non-scientists is a difficult endeavor. Scientific ideas can be complex, and communicating them is frequently hampered by disciplinary jargon and terminology. However, because scientists are specialists in their fields and think clearly, it is generally assumed that they are also natural experts at conveying science to laypeople and can communicate effectively. There are renowned neuroscientists who have made their work accessible to the general public through popular science writing, such as Oliver Sacks and Robert Sapolsky. We do not believe, however, that these and other scientists who are literary characters in their own right should be used to demonstrate scientists’ intrinsic ability to communicate.

It takes purposeful practice and careful attention to language to develop skills in communicating science at a level that a general audience can grasp. Scientists, for example, are frequently chastised for failing to distinguish between jargon and ordinary English. Because the expert is so far from the experience of encountering the phrase or concept for the first time, this might be a more difficult undertaking for an expert in a field than for a novice. Professors face this challenge in the classroom because, while they may be experts in scientific content, they may not be experts in pedagogical subject knowledge.

Consider a scientific journal, a federal government press release, or a blog post. Each one has its benefits. It might be better to understand the goals of both types of communication before tackling a specific project. But a great public science communications program will help both. And it may even lead to better policy and decision-making.

A scientist collaborates with other scientists to plan a laboratory experiment and sends a preview copy to colleagues. In contrast, a federal government agency holds a press conference to announce the response to a new virus epidemic. A similar strategy is to publish a journal article detailing the technical details of the new virus. This is not public science communication, but it is an excellent example of a well-known case of science communication.

A scientist writes a paper that details his research, conclusions, and other relevant details. He sends it to a peer-reviewed journal for publication. A federal government agency also holds a press conference to describe its response to a new virus epidemic. These are examples of public science communication, but which one illustrates the difference between these two scenarios? If you don’t know which type of publication is more successful, you can always share the final results with the public.

Let’s start with a real-life example. A scientist’s research results are often shared with colleagues and the general public. After the research is complete, the scientist will publish the results in a peer-reviewed journal. He will also send out preview copies of his journal article to his peers. In both examples, he engages the audience and makes sure they know what the research is about.

A scientist may share a preview copy of a journal article with his colleagues. But in a more formal setting, he or she may send an e-mailed version of the same article to a broader audience. In the same way, a scientist may send a preview copy of his journal article to other scientists. A government may also send a press conference to discuss their response to a new virus epidemic. Both examples are examples of public science communication.

Although comprehensive curriculum change to include explicit training is still needed, there are a few instances of courses that provide formal training for aspiring scientists to become better communicators to lay audiences. they give here an example of one of these courses: a writing-intensive undergraduate and graduate neuroimmunology course that we developed and implemented through Stanford University’s Immunology Program. Although the course emphasized knowledge of core scientific content, it also provided students with the opportunity to practice communicating science to a lay audience. they believe that the course’s innovative style provided students with the opportunity to practice their communication abilities while remaining focused on scientific material.

Students attended weekly lectures by an expert on a current issue in neuroimmunology and read a recent main scientific paper documenting a significant advancement in the area. The course’s main project was to write a New York Times “Science Tuesday”-style piece aimed at a lay readership, explaining the paper’s main points and the implications of the findings. Students discussed the primary scientific article with each other and with graduate student teaching assistants in a weekly discussion segment to help with the writing process. The teaching assistants also provided feedback on the students’ articles, and they were given the option to rewrite the assignment if necessary.

Furthermore, rather than mastery, their goal was to promote proficiency. They recognize that several degrees might be conferred for science communication, hence they do not believe that mastery can be achieved in a single 10-week course. Their goal was to present an overview that would allow students to better understand what it takes to communicate effectively with a non-scientific audience.

Looking from a scientist’s point of view, These discussions can be with relatives or friends who are curious about what you do and why you do it, or with people who work in fields other than science. An elevator speech should be no longer than two minutes, preferably less.

How to Make an Elevator Speech?

Focus on the big picture while introducing your topic. Instead of addressing your specific research issue, take a step back and consider how your findings relate to something that a larger audience could be interested in.

After you’ve introduced the subject, explain how your research will affect the major question. Mention your objectives and how you plan to achieve them. Analogies can be beneficial.

Be careful how you express yourself. Remove any jargon or information that isn’t necessary or relevant.

Demonstrate excitement for your research. Make it clear to your audience that you are enthusiastic about your study issue. They might be enthralled by your enthusiasm!

Finish by tying your study to the main question and explaining why it is vital and significant.

We encourage other academic communities committed to promoting scientific communication to provide courses that include explicit training in science communication to a wide public audience as part of undergraduate and graduate science curriculum. Science communication skills do not need to be taught as stand-alone electives, as we have shown with our neuroimmunology course, but maybe effectively integrated into lecture-based courses that focus on the interpretation of primary scientific literature and understanding of the scientific subjects.

To be responsible for the public understanding of science, it is not enough to rely on science journalism or the efforts of a select group of literary researchers.

As the pandemic and climate change have demonstrated, communicating science is vital to resolving the world’s most pressing problems. While it isn’t always a fair war — too frequently, misinformation spreads throughout the world while scientific truth ties its shoelaces — it is a vital one.