Is Archaeology a Good Career? 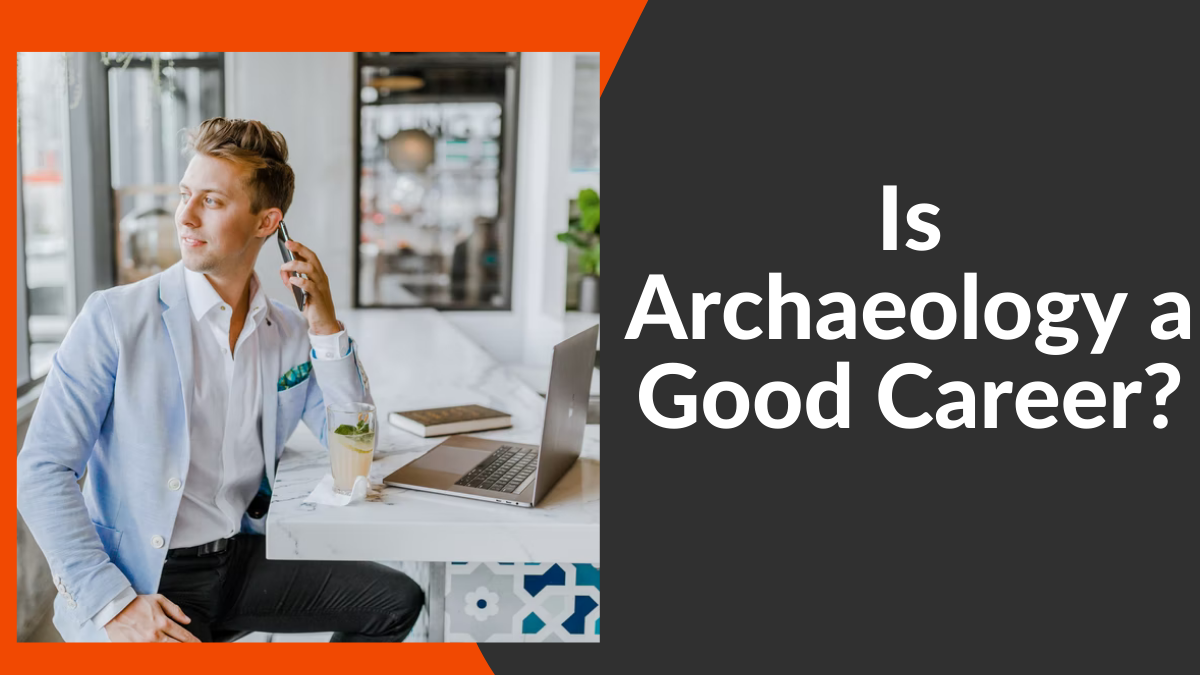 The study of ancient and recent human history via material remains known as archaeology. Archaeologists may investigate the million-year-old fossils of our forefathers in Africa. They might also research structures from the twentieth century in modern-day New York City. Archaeology studies previous physical remains to get a comprehensive and complete knowledge of human society.

It’s also a branch of Anthropology, which is concerned with studying all human civilizations. Archaeologists are specialists in the field. The word “archaeology” comes from the Greek word “archaeologic,” which means “ancient history.” Artifacts, architecture, biofacts (eco-facts), and cultural landscapes are all studied in archaeology.

Archaeologists are scientists who investigate the relics of former civilizations and groups of people. The research items such as dwellings, clothing, tools, bones, pottery, and other artifacts left behind by people who lived a long time ago.

Archaeologist collects numerous sorts of evidence from various locations and observe and evaluate the results. If you want to be an archaeologist, you must have a thorough understanding of history and geography.

Prehistoric Archaeology– It is mainly concerned with the study of historical cultures that did not have access to written language.

Historical Archaeology– It is the study of cultures or civilizations that existed at the time of written history.

Underwater Archaeology- It investigates the physical remains of human actions under the ocean’s surface. Maritime technology is also included.

What Qualification Do You Need to Become An Archaeology?

Most archaeologists will require a master’s degree and, in some circumstances, a doctorate to get a position in this area. A master’s degree typically permits these professionals to progress beyond entry-level roles, but a Ph.D. lets them work on worldwide projects, teach at universities, or serve as museum curators. Applicants for all roles will almost certainly need substantial field experience. According to Gifford-Gonzalez, the Archaeological Institute of America’s website lists different field schools. You can also get field school experience through the US Forest Service’s “Passport in Time” programs, which are less expensive.

What Does An Archaeologist Do?

An archaeologist’s typical responsibilities include:

Jobs Can You Get with a Degree in This Field

Are Archaeologists High in Demond?

In the business sector, there is an apparent demand for archaeologists. However, there are a few limitations. The first is that many of the available employment is what we lovingly refer to as “shovel bum” occupations. This implies that the majority of your time will be spent digging in the field, for which you will be paid hourly at a decent (but not excellent) rate, and the analytical element of archaeology will be left to someone else. The beauty of these professions is that you may swiftly advance if the firm is hiring, and if you are allowed to contribute to the analyses, you will have an even greater chance in the long run.

Where Do Archaeologists Work?

If you wish to be an archaeologist, you might need to work in one of the following environments:

How Much Does An Archaeologist make?

The pay of American archaeologists is invariably higher: no general average is given; maybe the most concrete data is that 61 percent of male archaeologists earn more than $40,000 (£25,000).

A day in the Life of a Archaeologists

There is no such thing as a “normal day”; it differs from season to season and project to project. In archaeology, there are no “average sites” or “average excavations.” An archaeological site can be recorded in as little as an hour, or it might take years to excavate. Archaeologists operate in many types of weather, including rain, snow, sun, and extreme heat and cold. Archaeologists are concerned about safety (we don’t work during lightning storms or flooding, for example, labor regulations typically prohibit your team from working more than eight hours in a single day). Still, with caution, a little rain or a hot day won’t harm us. If you’re in charge of supervising an excavation, the days may continue as long as the sun. In addition, your day will most certainly contain notes, meetings, and late lab studies.

But archaeology isn’t just about digging in the dirt; some archaeologists spend their days sitting in front of a computer, doing research at a library, or talking on the phone.

Skills Needed to Become An Archaeologist

Here are Given Some Skills to Become An Archaeologist

Here are Given Some Best Universities for Archeology Study;

Archaeology courses are available through the Department of Anthropology. The B.A. in Archaeology degree at USC offers academic depth and a field concentration. Majors in archaeology will gain a broad understanding of the discipline’s history, exposure to the numerous and growing theoretical views that influence archaeology, and hands-on practice with basic and modern field technology.

Joukowsky Institute for Archaeology at Brown Institution offers a variety of fantastic Archaeology and Ancient World Courses to students. These courses include ARCH 0156 Architecture and Urbanism of Africa, ARCH 0255 Monsters, ARCH 0520 Roman Archaeology and Art, ARCH 0529 Swords, Sandals, and Saunas: The Roman Army in War and Peace, and many others. These courses are devoted to the academic study and public promotion of archaeology and art from the ancient Mediterranean, Egypt, and the Near East (roughly defined as ranging from Anatolia and the Levant to the Caucasus).

ASU’s archaeology program is regarded as one of the greatest in the world. With ongoing academic research on every continent, our research is truly global. From the earliest hominids through prehistoric cities, we cover the gamut of prehistoric cultures.

Faculty members from Washington University‘s Department of Archaeology are working on projects in Central Asia, Northern Africa, China, Greece, the Andes, the Mayan region, New Mexico, and the Mississippi River basin. Archaeologists can work in academia, commercial consulting organizations, government conservation, compliance agencies, and museums with a degree in archaeology. Graduate-level education is typically required for academic and museum roles.

Tufts University awarded two bachelor’s degrees in archaeology during the 2019-2020 academic year. As a result, the institution was ranked #37 in terms of popularity among all schools and universities offering this degree. This is a 100 percent increase over the previous year when only one degree was awarded.

Harvard University awarded nine bachelor’s degrees in archaeology during the 2018-2019 academic year. The institution was rated #9 out of all colleges and universities that offer this degree due to this.

Wheaton College has an extensive collection of artifacts donated to the College or discovered by Wheaton College staff and students during archaeological investigations. Biblical Archaeology majors at Wheaton College in Illinois are taught to examine the Bible in its long-term geographic, historical, cultural, and social context.

Here are Given Some Best Online Courses For Archaeology

Roman Art and Archaeology By Coursera

The goal of this course is to provide students an overview of ancient Rome’s civilization from around 1000 BCE to the so-called “Fall of Rome.” From the period of the monarchs to the Roman Republic and the Roman Empire, we’ll look at some of the significant figures that shaped Rome. We’ll also look at Rome’s city, as well as the city’s spread throughout Italy, the Mediterranean, and beyond.

Many spectacular ancient archaeology sites will be visited during the course, including Stonehenge in England, Giza and Karnak in Egypt, Chichen Itzá in the Yucatan, Macchu Picchu in Peru, and the Pantheon in Rome, and the fascinating events that occur there on particular days of the year (such as solstices, equinoxes, or the day of the foundation of Rome) will be shown and explained. The course also covers the basics of astronomy with the naked eye, as well as a broad overview of the significance of astronomy in religion and power control in ancient societies.

Pyramids of Giza: Ancient Egyptian Art and Archaeology By Edx

The art, archaeology, and history of the Giza Pyramids will be explored in this introductory course. We’ll study Egyptian pharaohs and senior officials during the Pyramid Age, travel in the footsteps of major twentieth-century expeditions and see how cutting-edge digital techniques like 3D modeling are redefining Egyptology.

Wonders of Ancient Egypt By Coursera

This archaeology course will look at how material culture may help us understand the past. It covers the history of Medieval Europe from the fall of the Roman Empire in the West to the present day. This was a period of significant cultural, social, and environmental transformation.

The subjects covered in the course are diverse. Changes in medieval diet and health, the expansion of Christianity throughout Europe, and migratory patterns and societal structures will all be discussed.

The field of archaeology is fascinating and ever-changing as new technologies are developed and discoveries are made. If you’re interested in a career that offers the opportunity to work on digs all over the world, then archaeology may be the perfect fit for you. We hope this article has given you a better understanding of what it takes to become an archaeologist, and we encourage you to learn more about this fascinating field.