How to Communicate Effectively With an Indirect Person? 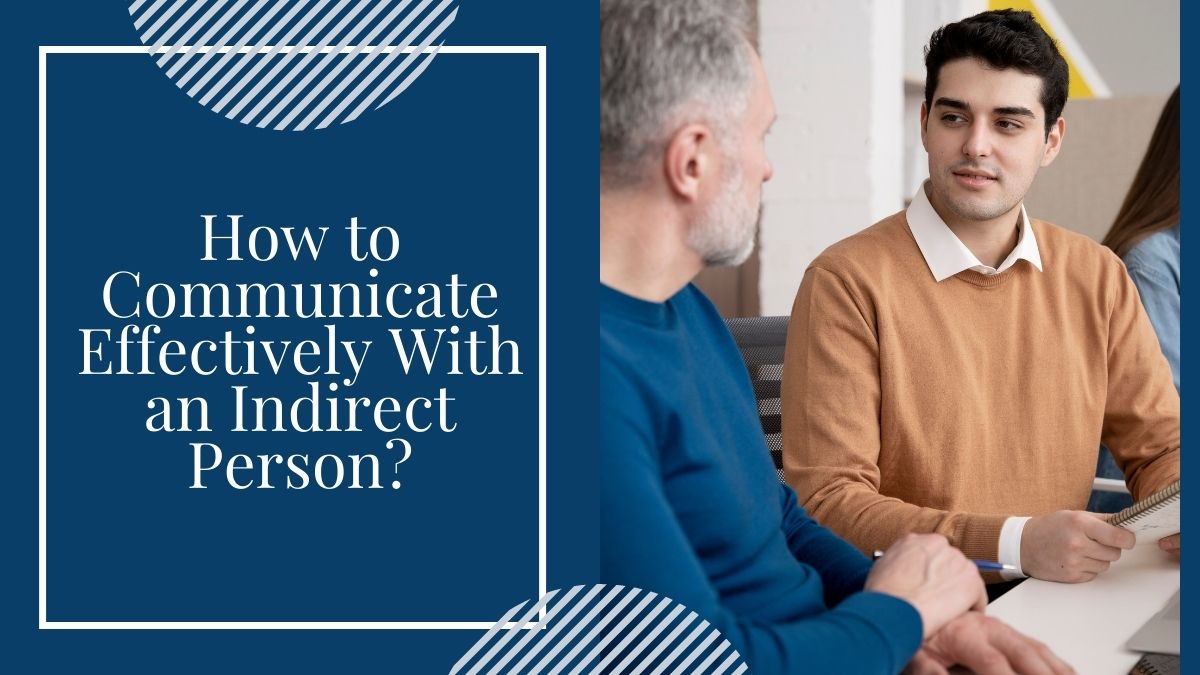 Indirect communication is a method of implying or hinting at what one truly wants or requires through body language, tone of voice, and/or gestures. In any relationship, this type of communication can lead to feelings of being misunderstood and unappreciated, and the negative effects are felt by both the person being indirect and the person receiving it.

Assume someone asked you to help them move out of their apartment this weekend, and you, understandably, did not want to spend your weekend helping someone else move. If you’re communicating indirectly, you might pause for a long time before responding in the hopes that the person will “get the hint” and avoid answering the question. Another example of modern indirect communication is “ghosting” someone after a date. Ghosting is when a person simply stops responding to and engaging with another person on social media, text messages, or any other form of communication in the hopes of temporarily ending the relationship.

Here’s How You Can Communicate Effectively with an Indirect Communicator.

Begin with a polite conversation to ease into discussions gradually. When you rush into business, you may make someone from an indirect communication culture feel uneasy. Taking a few minutes at the start of a conversation to inquire about the person and their well-being demonstrates that you are not “all business.”

Direct communicators use clear declarative sentences when there is no doubt about their position. This is not a good way to communicate in Asia or the Middle East, where communication is softer and more refined. When you soften your language, you sound less direct and forthright. as in:

Take Note of Nonverbal Cues Such as Pauses, Silence, And Tone of Voice.

When Requesting a Decision or an Answer, Exercise Extreme Caution.

Disagreement Should Be Hidden Behind the Elaborate and Diplomatic Language.

We may not always agree with what others say, but we do want to avoid conflict, confrontation, and tension when this occurs. rather than simply saying, “Instead of saying, “You’re wrong,” a more diplomatic approach would be to say, “I see what you’re saying. “Have you thought about…” or “That’s a good point.” To add to that, I’d say…”

Instead of saying no to a request, use phrases like “it will be difficult” or “let me get back to you.”

Active listening entails paying attention to the speaker through nonverbal cues and small verbal gestures. When engaging in conversation, this includes making eye contact, nodding, smiling, taking notes, and interjecting small phrases or words. These include phrases and words like “yes, sure” and “I see.” Active listening skills can be practiced when speaking directly with coworkers and managers, as well as when listening to presentations at meetings.

Although connecting with coworkers is important, using professional language in emails, presentations, and verbal communications can help convey your professionalism and dedication to your job. Consider whether it would be appropriate to send a message to a supervisor to see if it uses professional language.

When you don’t get answers right away, try to be patient and remember that the other person may need time to think about the subject or consult team members before responding. When you want to conduct a follow-up conversation with an indirect communicator, polite reminders can help them keep their schedules and focus.

Because of the increased use of technology in corporate communication, communicators are unable to read body language or tone. Direct communicators can benefit from more personal communication. A face-to-face conversation is more effective than a series of short messages in resolving disagreements. Furthermore, it helps to build relationships, which can make your workplace more enjoyable.

Learn to Agree to Disagree.

Conflicts can arise in both personal and professional relationships, so learning how to handle them is critical.

Here are a few pointers from the PURRR method, an acronym that helps you remember the steps:

Attempt to Be More Diplomatic.

Instead of seeking immediate responses, you can try to make more diplomatic requests. Instead of asking “Why?” or “Why not?” you could say, “Can you give me a little more background on that?” The request remains explicit, but it is less likely to offend your counterpart and thus more effective. Also, if you want to express a negative opinion, think about softening your language.

People who communicate indirectly are more reserved and polite than those who speak directly. In order to avoid arguments, rejection, or save face, indirect communication is frequently used. While it is more difficult to understand, when done correctly, it can be very effective. The most important thing to remember is that direct communication is not always the most effective communication. Instead, use nonverbal cues to convey your message.

Recognize that direct people are far more reassured by absolutely genuine responses than they are by a gentle “letdown.” It is a sign of trust and respect to express your true position as soon as possible.

Hearing very specific questions or requests for clarification from direct people is not a sign of aggression on their part; rather, it is a sign of discomfort (and sometimes anxiety) that they are unsure about the situation. They may even suspect that you are deceiving them or have bad intentions.

Remember It’s Not for Everyone

If you use indirect communication in your relationship, keep in mind that direct communication is not for everyone. If you don’t have a native speaker, it can be difficult to interpret. If you don’t speak the language, you can warn the other person so they don’t make assumptions about your intentions. It’s also a good idea to use assertive body language. Try to maintain a direct gaze on the person with whom you are conversing. Also, remember to be confident in your ability to speak clearly and confidently.

Why Do People Communicate in This Manner?

Why do people choose indirect communication to convey their message when it is clearly easier to say it directly? This is because these people do not want to be directly rejected; instead, they want to avoid arguments, be on the “safe” side, and ultimately save face.

What Are the Benefits of Indirect Communication?

Indirect communication keeps your foot out of your mouth. One of the most significant benefits of indirect communication is that it is an “edit-as-you-go” model. You don’t have to “reveal your cards” until the end because you can constantly adjust the message based on feedback.

What Is the Difference Between Direct and Indirect Communication?

It’s Also Important to Understand What an Indirect Person Is?

What Do You Call It When Information Is Communicated in an Indirect Manner?

Indirect communication is the use of facial expressions, tone of voice, and/or gestures to express what a person is thinking or feeling rather than directly saying it.

How Do You Deal With People Who Are Indirect?

Don’t get involved in their drama. Set firm boundaries and keep an eye on the bottom line. Do not attempt to solve their problems. Don’t be surprised if they act that way once you realize they can’t be trusted. If you like one of these people, observe how frequently they engage in this behavior. You despise in others what you despise in yourself.

What Do You Think of Indirect Communication?

Indirect communication is a method of communication in which a person chooses to act out what they truly mean rather than saying it directly. A person can say something and mean something completely different by using tone of voice, gestures, and facial reactions.