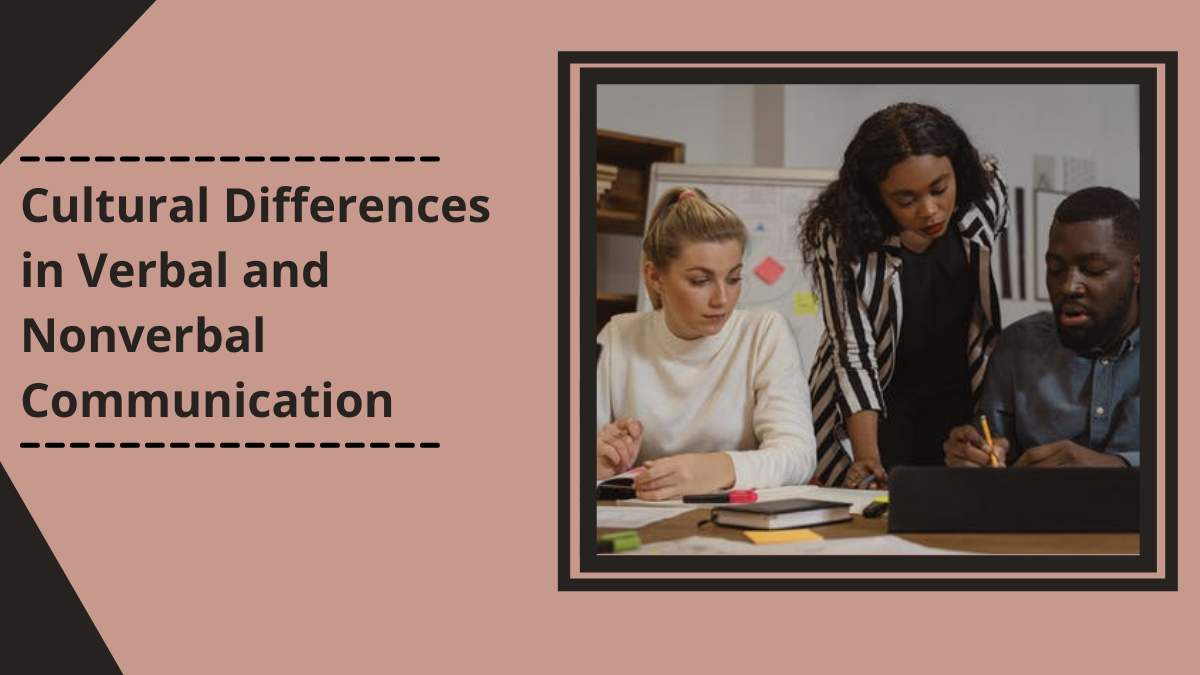 A sender, encoding, messages, channels, sounds, a receiver, decoding, the recipient’s response, feedback, and context are all part of the dynamic communication process. It might be deliberate or accidental, and it is always influenced by things such as time, topic, and circumstances, as well as one’s culture. Sounds, words, and language make up verbal communication, which directly links to culture. The use of words to communicate is known as verbal communication. Even if two civilizations share a common language, they may not speak it in the same way. Indians and Americans, for example, both speak English, yet some terms have various meanings depending on which nation you are in.

Those acts and traits that have socially shared meaning are actively transmitted or interpreted as intentional, are consciously communicated or consciously received, and have the capacity for feedback from the receiver, according to the definition of nonverbal communication.

1. What Role Does Culture Play in Verbal Communication?

Members of a culture use language to express their thoughts, beliefs, attitudes, and values, reinforcing their shared sense of cultural identity. As a result, the language you use and the words you choose reveal who you are to others.

There is no such thing as a culture-free language. You can’t overlook the broader cultural context that gives words meaning if you want your intercultural communication to be effective. We’ve talked about language’s linguistic challenges, but what about its cultural issues? Cultural competency is a type of knowledge that encompasses all of the various systems of ideas and beliefs that people in a community share and convey through language. Second language learners can use cultural awareness to avoid writing grammatically correct but embarrassingly unsuitable statements.

When and how specific speech actions can be performed may change substantially depending on the culture. Greetings, leaving, thanking, apologizing, and other routine formulae do not follow the same, or even comparable, standards across cultures, leading to misunderstandings and confusion. The ideals that culture promotes and how it believes human relationships should be are directly linked to how language is employed in that culture.

2. What Role Does Culture Play in Non-Verbal Communication?

The good news is that most of us learn to understand nonverbal communication as we grow older and develop. It’s an unavoidable part of our social interactions, and most of us utilize and interpret it without ever recognizing it. As a result, it may be more challenging to interpret consciously. You’ll probably realize you have a good understanding of what someone was trying to express if you stop thinking about it. The bad news is that nonverbal communication differs significantly between cultures.

Nonverbal communication might differ depending on the culture. In certain cultures, displaying emotion in public is considered impolite. This behavior is frowned upon in some cultures, as it may be interpreted as a lack of self-control over one’s emotions. People in other cultures may make gestures to show respect or give directions. This could explain why Japanese people are more reserved with their facial expressions. Silent communication is another type of nonverbal communication. This communication style is used to communicate the importance of an idea in a discourse. Furious individual may slam their hands together or throw themselves in the air. They could be expressing happiness, joy, or even terror. They will communicate differently. The other person’s body language will be highly different from theirs. When intercultural people converse, misinterpretation can occur due to disparities in nonverbal communication meanings. Due to cultural variances in nonverbal communication, people might insult others without meaning. Most cultures have comparable facial expressions because many of them are innate, such as smiling and crying.

According to studies, happiness, sadness, disgust, fear, anger, and surprise are six universal expressions. However, there may be differences, such as how people communicate their feelings; some cultures express their feelings freely, while others do not.

3. What Difference Does Culture Make in Communication?

Culture is a big differentiator for communication, especially non-verbal communication. Facial expressions, gestures, and ways to communicate have cultural contexts. Some of the cultural nuances in communication are given below:

People’s facial expressions and how they interpret others’ facial expressions are influenced by their culture. Smiling, for example, can imply that someone is friendly and approachable in the United States. However, in Japanese society, people are supposed not to smile at strangers because it is considered impolite, especially for ladies.

People’s speech patterns may be influenced by whether they live in a high-context or low-context culture. People in high context cultures explain everything they’re talking about and assume that others don’t know anything about a particular topic. On the other hand, in low context cultures, individuals are expected to understand what is being told to them, and thus, they don’t explain everything. Countries like the USA UK are generally seen as capitalistic liberal countries known for their advocacy of human rights and freedom which is the complete opposite in eastern Asian countries that still live in their old conservative ways. In the middle east, freedom is a dream with restrictions on many things. Communication depends on the context of ideologies of a country or area.

Speaking might be formal or informal depending on cultural standards. People in informal cultures assume that everyone is equal, so they speak to everyone in the same way. In more formal societies, people are thought to have a hierarchy and must observe certain norms depending on who they are speaking with. In western culture, it is very typical to address people by names; whatever their age might be, people address each other with their first names. In South Asian cultures, it is considered very rude or disrespectful to address an elder by their first name.

Whether people touch one other depends on whether they live in contact or noncontact society. When people speak in contact cultures, they are expected to touch one other and stand near to each other. This form of touching is considered impolite, demanding, and aggressive in noncontact cultures. People in these cultures rarely contact each other and prefer to stand further apart. . For example, some Asian cultures consider shaking hands rude, while others prefer to use their arms to greet. While most cultures are liberal and respect nonverbal expressions, some cultures are more conservative than others. While this can harm communication, many cultural differences can help you understand how you should communicate with another culture.

Another type of nonverbal communication is appearance. People are judged based on their physical appearance. Variances in a race, as well as differences in attire, reveal a lot about a person. In most cultures, grooming oneself to look attractive is considered a significant component of one’s personality. However, different cultures have varied ideas on what constitutes a decent appearance. The look of modesty is also a criterion for modesty.

Physical distance between people is tolerated differently by people from various cultures. People in Middle Eastern culture enjoy approaching others to communicate, although people in other cultures may be terrified if someone does so.

Far Europeans and Americans are not enthusiastic about breaking physical distances, and Asians are less enthusiastic. People have a certain amount of personal space that they do not want to be invaded. Even close physical contact between strangers is permitted in some cultures.

Culture and language may also impact how we express ourselves. In many cases, cultural differences in language and behavior are a significant barrier to communicating with others, but other aspects of communication maybe even more critical. Among these are the various rules of speech and how people form sentences. Furthermore, culture also affects the way people express themselves, such as facial expressions and body language. Nonverbal communication can be another cultural barrier and can lead to misunderstandings. In general, cultures differ in nonverbal communication, and there are many examples of how nonverbal behaviors affect communication. Some cultural differences in verbal and nonverbal communication can be confusing. Some people mistakenly communicate with someone from a different culture by using the wrong facial expressions. And some cultures even confuse the meaning of a smile or a cry. Using different words and body language can vary significantly in a culture.