Cost of Living in Romania 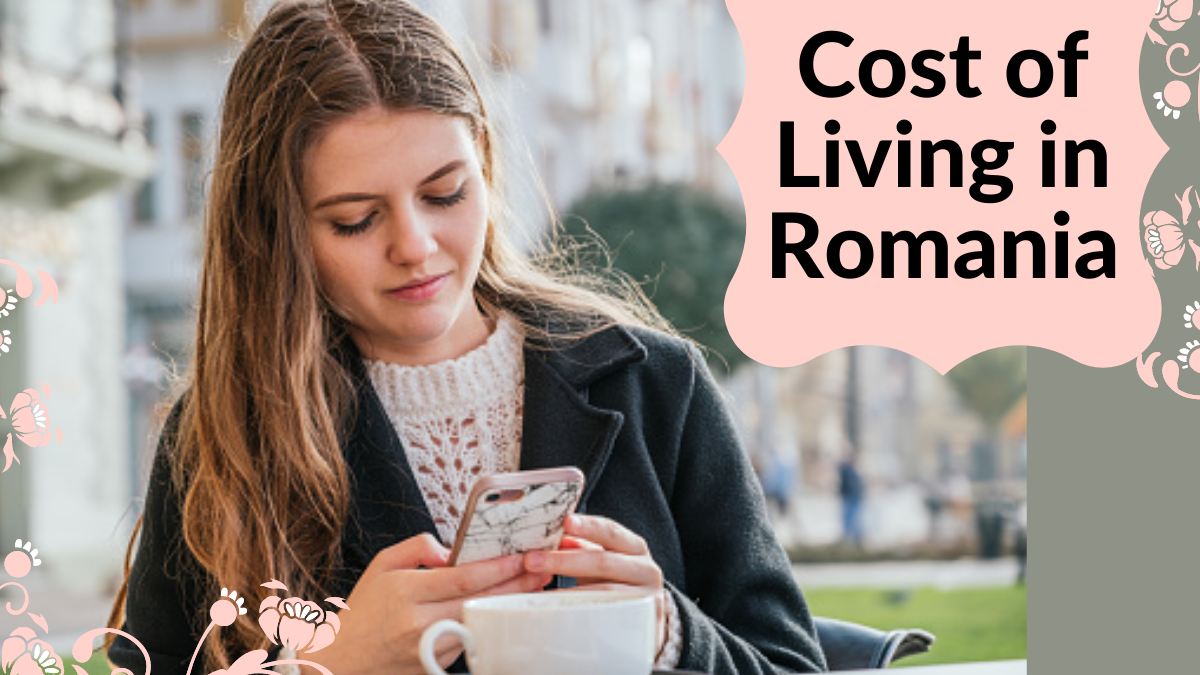 Some may only know Romania as the birthplace of Dracula, but it is deserving of far more attention. This unique Eastern European country is a gem that the world has yet to fully appreciate but will soon. Romania offers it all when it comes to natural beauty: mountains, plains, and a coastline. When it comes to the people, you’ll find them to be among the friendliest you’ll ever meet. Along with the fantastic food and culture, it’s a place you should absolutely visit. You’ll need assistance at first, whether you’re temporarily relocating, retiring, or permanently relocating. If you want to manage your money wisely, you’ll need to learn a little about the cost of living in Romania.

Romania’s cost of living is among the lowest not just in Europe but also globally, especially when considering the quality of life and services. Living costs are around a third, if not a quarter, of what they are in a Western European country. Accommodation, tuition fees, books, food and beverages, nightlife, energy bills, petrol, car rental costs, and public transportation, among other services typically utilized by students, are all available in Romania at a fraction of the price paid abroad. This is why Romanian universities are at the top of any student’s wish list if they want to study medicine overseas. The combination of all of the aforementioned, as well as the outstanding level of graduate studies, draws a large number of international students. Students typically spend between 475 and 533 pounds per month on private housing, food, utility bills, transportation, and other incidental expenses. Many students try to cut down on their monthly expenses by sharing a flat, buying used books, and so on. Smaller towns may have much-reduced prices.

This handbook should answer all of your questions and concerns. We’ll tell you about average monthly expenses and wages, as well as how to get the most of your money.

Let’s start with the fundamentals of money in Romania. The Romanian leu is the official currency. You may come across its code (RON) or see it written in the plural more frequently (lei). They haven’t switched to the euro yet, but they intend to do so in the near future.

The value of the Romanian currency in relation to the value of certain major world currencies (at the time of writing) is as follows:

It may be difficult to adjust to the Romanian leu if you have never used it before. That is why you should always have a currency converter on hand. It tells you how much your money is worth, so you know you’re not overpaying for anything.

Bucharest is the most costly city in Romania in terms of living costs. Despite this, the Romanian capital is ranked 174th on Mercer’s Cost of Living Index, whereas London is ranked 19.1. That alone gives you an idea of how much of a difference you can expect.

Even in Bucharest, Romania has one of the lowest living costs in the EU. As a result, you can live a cosmopolitan lifestyle on a shoestring budget. However, you will still need to budget. Because Bucharest has the greatest cost of living, these prices will represent the cost of living in the capital.

The following are some examples of average Romanian living costs (in ROM and USD):

• The majority of students rent from their school. In the United States, this is referred to as dorms, while in Europe, it is referred to as hallways or halls. Renting this type of housing is substantially less expensive. It varies depending on the school and the sort of room you desire.

• In Romania, tap water is not safe to drink. You’ll need to account for the cost of bottled water in your budget. The Romanian government, on the other hand, is working hard to enhance the quality of tap water.

• The average monthly cost of living without rent is 2300ROM ($560). Rent is usually treated as a separate expense.

• When it comes to payment options, Romania is a cash-based economy. Bank transfers are also often used. Cards are growing more popular, especially in urban areas. Cash is king outside of cities. Make sure you have adequate cash on hand in case of an emergency or for everyday needs. Take Euros with you if you need to change money. Changing Euros to Romanian Lei is simple and widespread throughout the country.

• The average monthly cost of living without rent is 2300ROM ($560). Rent is usually treated as a separate expense.

What Are the Costs of Healthcare and Dentistry in Romania?

Romania, like many other European countries, has a single-payer healthcare system. Romanian healthcare is generally of high quality, albeit it is less so in rural areas than in urban areas. If you live in Romania and pay your taxes, you have the right to access the country’s national healthcare system. Self-employed people pay their own contributions and are responsible for their own expenses. Those with employment will have a portion of their salary withheld automatically.

Minors, students, pensioners, and those receiving assistance are among those who are exempt from paying. Even if a person does not have health insurance, they can still receive emergency treatment. If you’re a posted worker, you can use your European Health Insurance Card (EHIC) to seek medical treatment in Romania. Dental treatment is not free. Unless you have an emergency, you will have to pay to see a private dentist. You can get healthcare after you have your residency card in hand. If you’re over the age of twenty-six, you’ll need to contact your insurance company. If you have an emergency, you can get medical help without having to provide your insurance information.

How Much Does It Cost to Travel and Get Around in Romania?

Nearly a third of Romanians walk from point A to point B, while the rest drive or take public transportation. Romania’s public transportation system is quite good. The only city with a metro is Bucharest. However, other cities have buses, trams, trolleybuses, and taxis. Monthly passes in Bucharest (and other Romanian cities) cost less than 100 lei. Trains are by far the most prevalent mode of domestic transportation.

The Babes-Bolyai University in Cluj-Napoca is Romania’s top-ranked university, according to the Shanghai ranking of world universities.

There are 14 English-language bachelor’s programs among the 243 offered. They’re primarily concerned with mathematics and computer science. When it comes to master’s degrees, there are more alternatives. The cost of tuition in Romania is determined on your passport. They will be substantially higher if you come from a nation that is not a member of the EU, up to 9,000 € per year. EU citizens pay the same rate as Romanians, which is usually between 400 and 1,000 euros per year. Being a student in Romania will not break the bank due to the low cost of living. Furthermore, your degree will be recognized throughout the EU and EEA, expanding your work options.

Bucharest is a genuine mash-up of several disparate elements. From its Parisian to Soviet architecture to its calm riverfront and raucous nightlife, the city has it all. It is one of the best areas in Romania for ex-pats because of the kind and laid-back residents. Timisoara has a vibrant and youthful spirit, despite its 1200s history. Many civilizations have left their imprint on this city over the years, making it one of the country’s most interesting destinations. Despite its small size, there is always something going on. Despite its status as Transylvania’s capital, Cluj-Napoca is anything but eerie and dark. As soon as you see its attractive streets and grassy areas, you’ll understand. It has a thriving art and festival scene as well as a significant student population. It’s also one of the best venues to experience the famous cafe culture of this region of Europe.

Six Reasons Why We Should All Move to Romania Immediately

The Internet Is Quick and Inexpensive

Many people associate Romania with horses and carriages, orphanages, and vampires. They don’t think of Romania when they think of great internet access, but Romania does. Romania has the fastest download speed in Europe right now. My service is now priced at around $12 per month.

In General, the Cost of Living Is Very Low

Romania offers among of the lowest prices in the EU for basic products. Rent in Bucharest, Romania’s most costly city, can be as high as you want it to be, yet a comfortable apartment can be had for less than $400 per month, and it’s usually a lot less. A nice bottle of wine may be had for under $6. For roughly $12, I ordered two pizzas, a dessert pizza, chicken wings, and mozzarella sticks from a local pizza delivery service (and due to a promotion, they threw in a bottle of wine for free).

While most Romanians’ earnings are famously low if you work for a global corporation, an international school, or as a successful freelancer, you may live quite nicely here on far less than you would need back home.

While Romania’s roads are far from excellent, it is an interesting country to visit by vehicle. The Transfăgărășan Highway is a lengthy, winding road that passes through breathtaking alpine landscapes. Jeremy Clarkson was so taken with the route that he dubbed it “the best road in the world” when it was featured on Top Gear.

Apart from that, exploring Romania by automobile is an unequaled experience because you can watch the serene countryside and threatening mountains pass by while stopping in lovely rural communities along the road.

The Romanian Countryside Cries Out to be Explored

Do you enjoy going on hikes? Skiing? Kayaking? What about bird watching? Is it possible to see huge mammals in the wild? Beaches? The country is vast, and these locations can be found anywhere (some don’t even have names, but you’ll find them if you simply walk in any direction). Romania’s unique landscape and four seasons will keep you entertained.

The People Are Incredible

Despite European media portrayals of Romanians as beggars and criminals, the vast majority of Romanians I’ve met are kind, hardworking, and quite accommodating of foreigners. The country has recently made some positive changes, such as cracking down on corruption and choosing a president who has promised to move the country forward.