Cost of Living in Las Vegas 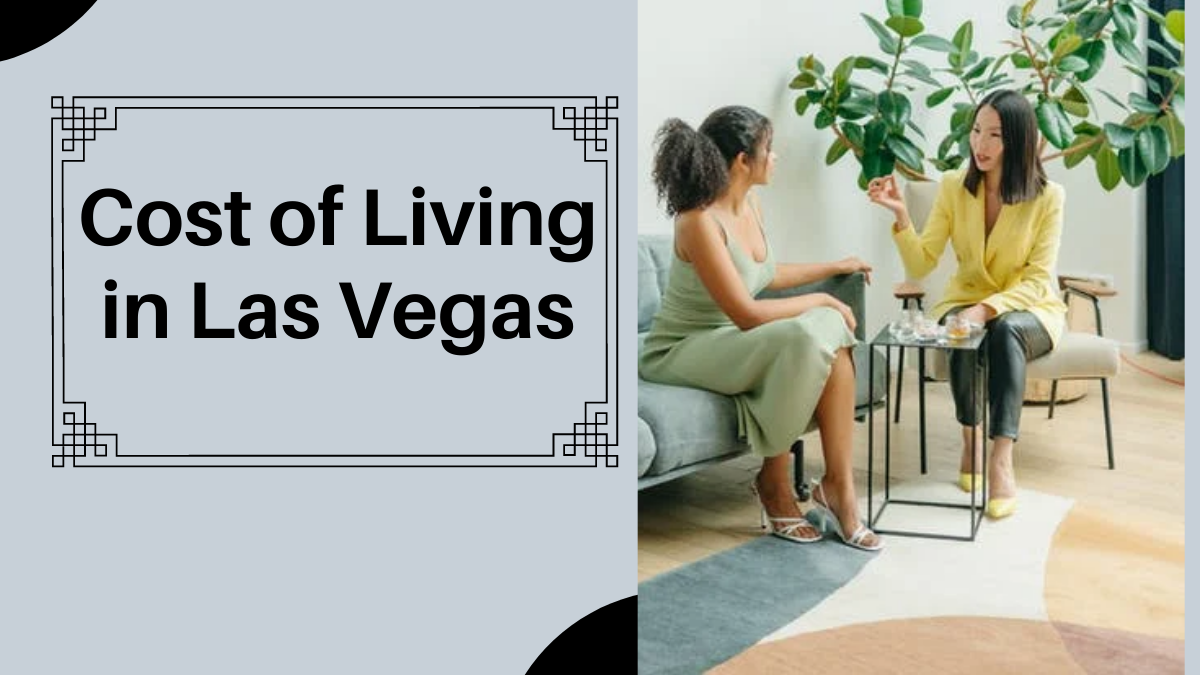 Las Vegas, Nevada, is known for its casinos, but it also has a lot to offer in terms of a fun environment to work, live, and raise a family. Las Vegas is a popular tourist destination because of its flashy casinos, luxurious shopping, and exciting entertainment. Las Vegas, also known as the “Entertainment Capital of the World,” was founded in 1905. The population has increased, perhaps doubling every ten years. The city proper presently has over 641,000 citizens, with a total population of about 2,228,000 in the broader metropolitan area. Las Vegas wasn’t previously known for its gaming. It used to be located alongside the Union Pacific Railroad tracks, which were an essential mode of transportation for business. The state of Nevada allowed casino gambling in 1931. Following WWII, Las Vegas experienced a surge in casino and hotel construction, establishing it as a Western counterpart to Atlantic City on the East Coast. In addition to the casino and tourism industries, Las Vegas boasts a slew of other companies that employ locals. Zappos.com (an Amazon business) has established its headquarters in Las Vegas. Allegiant Air is a low-cost carrier based in Las Vegas that operates out of McCarran International Airport. Planet 13 Holdings also has the world’s largest cannabis dispensary in Las Vegas, 112,000 square feet.

Yes, the cost of living in Las Vegas is higher than in many other cities. However, this is the total cost of living in Las Vegas. Living costs vary widely from neighborhood to neighborhood. And while the overall Las Vegas cost of living is slightly higher than the national average, it is, in fact, only about 1% higher than for Nevada as a whole. In addition, when calculating living expenses in a particular area or city, you also need to consider specific cost-of-living factors – because some are much more important than others. In Las Vegas, for example, health and healthcare costs are almost 8% below the national average.

Preconceptions Are Being Shattered

We all have a mental image (or mental image) of Las Vegas-based on certain preconceived assumptions, some of which are true and others of which are not. First, there’s the cost of living in Las Vegas, which we’ve been informed is exorbitant and have been encouraged to believe is. “The cost of rent, food, and even things like petrol varies significantly in Las Vegas depending on the location,” says one resident. Everything is more expensive near The Strip, which attracts many tourists, many of whom are wealthy, who come with large sums of money to spend on amusement. Even on the edges of town, some communities, like Henderson, are more expensive to reside in than others, like North Las Vegas.”

Then there’s the matter of the shattered Las Vegas expectations…

Because of the gambling, colorful, non-stop nightlife, and reputation as a significant tourist attraction, Las Vegas is known as Sin City. In reality, the city features residential regions with communities that are home to many permanent people. Yes, many of these individuals work in the hospitality sector, but they can be found in any career or walk of life. The city’s attractions and strengths can also be its drawbacks. Take, for instance, the weather.

Every year, Las Vegas boasts an average of 330 sunny days, which is a significant plus for many individuals. “The city’s warm, dry environment is appealing, and the city’s rentals are affordable when compared to other medium-sized cities in the United States.” However, those sunny days, which can be relatively warm, entail more significant utility expenditures to keep those air conditioners running. On the other hand, the very mild winters result in reduced utility expenses. It’s just that things don’t always go as planned.

So, what is the cost of living in Las Vegas, and how much money do you need to live there? The answer is that it is debatable. “The amount of money you’ll need to live in Las Vegas is determined by a variety of circumstances, including where you live and whether or not you have dependents to support. The average cost of necessities like rent, utilities, food, and transportation is a great place to start.”

The Cost of Living in Las Vegas

The average rent for a two-bedroom apartment in Las Vegas is $1,946, up 30.1 percent over the previous year. However, the high cost of living in Downtown Las Vegas — which averages $2,875 for a two-bedroom condo — has a considerable impact on that figure. With high-rises, historic buildings, and a plethora of cafés and restaurants, the downtown area has been renovated and is now one of the few walking areas in Vegas.

Compared to other adjacent cities, the average rent in Las Vegas is not bad at $1,946. Here’s a look at average rents in other Nevada communities and a nearby large Arizona city:

According to Redfin, the housing market in Las Vegas is competitive. Home prices are rising, with a 22.3 percent increase from the prior year as of August 2021. The median price of a home in Las Vegas is now $370,000, and the average time it takes to sell a home is currently 19 days, down from 45 days last year. In August 2021, 2,761 residences were sold, up from 2,403 the previous year.

With numerous bids, homes in Las Vegas typically sell for 1% above the list price, with some selling for as much as 4% over. As a result, be prepared when shopping for a new house in Las Vegas is an excellent idea. If it’s a home you truly want in a hot neighborhood, know what you want ahead of time and be ready to make an offer promptly.

The Cost of Food in Las Vegas

Las Vegas is a terrific place to live if you adore eating, especially if you enjoy all-you-can-eat buffets. Since many buffet restaurants closed or went bankrupt during the covid pandemic, a Las Vegas buffet may be one of the few places where you can gorge yourself on endless food. Thanks to improved cleanliness procedures and workflows, today’s post-covid Vegas buffet should be a relatively safe place to eat.

Even yet, we can’t blame you if you’d rather dine at home. If that’s the case, be budget-conscious, as the cost of groceries in Las Vegas is 6.4 percent higher than the national average. A half-gallon of milk costs $11.69, while a steak costs $11.69 on average. Parmesan cheese, $3.13

The city of Las Vegas is located in the Mojave Desert, which has a desert environment. This means that while the days might be pretty hot, the evenings can be extremely chilly, especially during the winter months. Due to its elevation of 2,000 feet above sea level, Las Vegas does not experience the intense heat common in deserts.

Yes, because Las Vegas doesn’t get much rain, it’s a “dry” heat, but it doesn’t mean you shouldn’t turn on the air conditioning. Despite the massive amounts of electricity required to cool casinos daily, the cost of living in Las Vegas is 5.4 percent lower than the national average for utilities, with an average bill of $160.97

The Cost of Transportation in Las Vegas

While tourists can get around with taxis and ride-sharing in Vegas, residents will almost certainly need a car. The cost of transportation in Las Vegas is 29.3% more than the national average.

The Las Vegas Monorail connects numerous significant hotels/casinos on the Las Vegas strip at speeds of up to 50 miles per hour for visitors. A one-way ticket costs $5; however, reduced passes, such as a day pass for $13, are available. Residents receive a $1 discount per ride, with a daily limit of two single-ride tickets. Once every ten days, you can also buy a 20-ride ticket. The Monorail is free for children under the age of five. The Loop, a new free service at the Las Vegas Convention Center (LVCC), connects convention-goers to the LVCC’s many halls and other public transportation options such as the Monorail. The Las Vegas Convention Center Loop is divided into two.85-mile-long tunnels dedicated to convention center visitors. Visitors are transported to the convention center for free in manual-driven Tesla electric sedans and SUVs.

The Sost of Healthcare in Las Vegas

In terms of healthcare, the cost of living in Las Vegas is 1.8 percent lower than the national average. The cost of healthcare in Las Vegas will, of course, vary depending on your age and current condition. However, you should expect to pay $108.20 on average for a doctor’s appointment, $106.60 for an optometrist, and $102.60 for a dentist. Without insurance, prescription medications can cost up to $486.40 on average, and Ibuprofen might cost as much as $9.27 at the store. If you’re looking for a hospital or medical center in Las Vegas, you’ve come to the right place. AMG Specialty Hospital-Las Vegas, Centennial Hills Hospital Medical Center, Children’s Hospital of Nevada at University Medical Center, and Children’s Hospital of Nevada at University Medical Center are among the top-ranked hospitals and medical centers in Las Vegas, according to U.S. News & World Report.

Costs of Goods and Services in Las Vegas

With so many tourists visiting Las Vegas all year, you’d assume the cost of various goods and services would be much higher. Despite this, they are only 1.4 percent more expensive in Las Vegas than the national average. Some items and services may be more expensive than others. In Vegas, a yoga class pass, for example, costs $20 – not inexpensive. On the other hand, a haircut costs $16.20 on average, while a complete beauty salon treatment costs $47.60. Tennis balls cost an average of $2.99, dry cleaning costs $14, a men’s shirt costs $20.85, and women’s slacks cost an average of $23.58.

In Las Vegas, Taxes Are High.

Nevada is one of the few states without a state income tax. The state sales tax is 6.85 percent, and when combined with the Clark County sales tax of 1.525 percent, the total sales tax in Las Vegas is 8.375 percent. This means that you will be taxed $83.75 for every $1,000 you spend in Vegas (except for exempt items, such as grocery food, of course).

To Live in Las Vegas, How Much Money Do You Need?

In general, financial advisors advise that your monthly rent payments should not exceed 30% of your gross income. According to this computation, with an average rent of $1,946 for a Las Vegas two-bedroom, you’d need to make $6,486.67 per month or $77,840 per year. Other considerations may also be at play, including that Nevada has no state income tax, which may allow you a little more rent flexibility. Check out our free online rent calculator to see how much you could be able to spend on rent in Las Vegas.

Knowing How Much it Costs to Live in Las Vegas

Despite the rising cost of living and hefty transportation expenditures, living in Las Vegas remains relatively low. Las Vegas is still a terrific place to live for young professionals, new families, and retirees alike, thanks to the lack of a state income tax and affordable things to see and do. The property market in Las Vegas is quite strong, so if you decide to buy a home there, you’ll be making a wise investment. In short, Las Vegas is not only a fantastic destination to visit but also a fantastic place to call home.