Cost of Living in Ireland vs. US 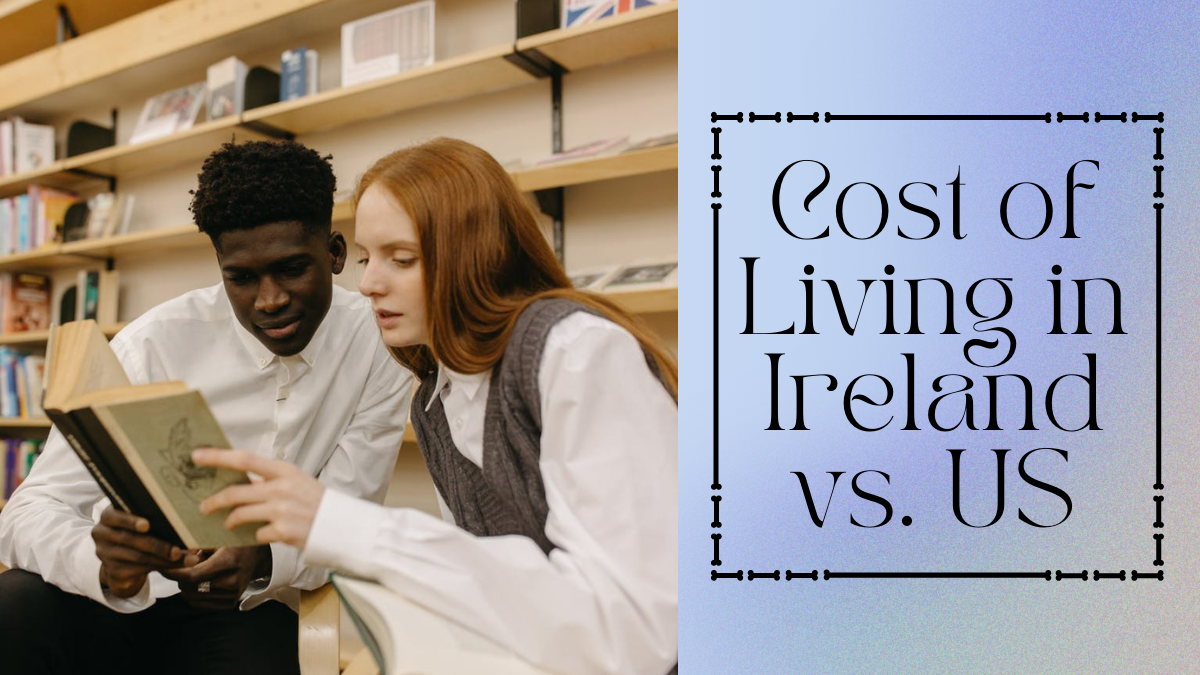 Despite its small size, Ireland has a wide range of living conditions and costs depending on the city and county. This article will break down and explain the cost of living in Ireland, but it is mostly a national average.

What Makes the Cost of Living in Ireland So Expensive for Americans?

For starters, the currency exchange rate between the US dollar and the euro is usually not favorable to Americans. The current exchange rate is $1 to €0.86 at the time of writing. This means that everything purchased in euros will be more expensive for someone who pays in US dollars.

The cost of living in the United States is significantly cheaper than in Ireland. To live comfortably, a family of four should budget around 6,000 EUR every month. This amount accounts for all living expenses, such as food, transportation, housing, and health insurance, as well as some discretionary spending. A single person in Ireland needs around 450 EUR each week, which is three times the minimum salary. The cost of health insurance and rent, on the other hand, has risen dramatically in recent years.

How Much Does It Cost to Live in Ireland in U.S. Dollars?

It’s crucial to realize that the cost of living in Ireland vs. the United States is highly subjective and varies greatly based on the level of quality of life desired. Moving to Dublin from southern California, for example, the rent prices are comparable to what I’m used to, but the cost of purchasing property is wonderful. That’s because I’d be lucky if I could locate a half-good house in a respectable neighborhood near my hometown for less than $1 million!

Furthermore, if you work remotely for a U.S. company, the cost of living in Ireland may be easier (or more difficult) to pay (depending on where you are coming from).

How Much Does It Cost to Buy a House in Ireland?

Housing in Ireland is substantially more expensive than in the United States, with a furnished apartment costing up to EUR2,000 per month. The average apartment costs $2,000 per month, which is higher than the national average. Furthermore, rent is increasing, making Dublin the 46th most expensive city in the world. To live comfortably, a family of four would require at least 6,000 EUR each month. While most ex-pats have high-paying employment, many are forced to save money by crossing the border to Northern Ireland.

The larger cities of Dublin, Limerick, and Cork, with Dublin being the most expensive, have a higher overall cost of living. Smaller cities and rural areas, particularly in Ireland’s west, are clearly less expensive to live in.

A three-bedroom house in Galway costs an average of €245,000, while a four-bedroom house costs roughly €430,000. Donegal, Cavan, Leitrim, Roscommon, and Laois are the five cheapest places to buy a home in Ireland, according to Irish Central. There are properties for sale in all of these cities for less than €200,000, and even less than €100,000.

What Is the Cost of Rent in Ireland?

How Much Money Do You Need to Live Comfortably in Ireland?

The amount of money you’ll need to live comfortably in Ireland is completely dependent on your lifestyle and preferences. Are you accustomed to living frugally and rarely venturing out? Or do you have more refined tastes and spend more money on clothes, outings, and the like? On average, you’ll need to make roughly €450 per week (€1,800 per month, or €24,000 per year).

How Does Healthcare Effect the Cost of Living in Ireland vs the U.S.?

In Ireland, there is no payment for an emergency ambulance, however, in the United States, the cost might range from $400 to $1200. Expats and anyone planning to stay in Ireland for a lengthy period of time will most likely be able to obtain either a Medical Card or a GP Visit Card, both of which provide full access to free public health care (free doctor visits, but does not include free prescriptions and tests). People with work permits, asylum seekers, students, and anyone with the right legal documentation and the intention to stay in Ireland for more than a year are eligible to apply.

Is Ireland a Better Place to Live Than the U.S.?

To suggest that one country is better than the other is purely subjective. The cost of living in Ireland vs. the United States is only one consideration when determining where to live.

When deciding whether Ireland is a better place to live than the United States, you must examine culture, lifestyle, weather, community, and other factors. I thought Ireland’s quality of life to be excellent, comparable to that of the United States. However, my day-to-day existence in Ireland is vastly different from that in California, making it difficult to compare and determine which is superior.

The cost of living in Ireland is much higher than in the United States. A one-bedroom furnished apartment can cost up to $2,000 per month. Similarly, the cost of living in the United States varies by region. A typical Dublin apartment might cost up to EUR8,000 per month, depending on the area. In Ireland, a student can save money on lodging by picking a town or city outside of the city.

Is Moving to Ireland a Good Idea?

Dublin is a particularly popular place to live, with consultancy firm ECA International ranking it as the second greatest city in the world for Americans to reside. Their research assessed 450 locations for “livability,” which included climate, housing, social life, safety, air quality, and health services.

Moving to Ireland will give your weekends a new lease on life. Ireland has everything, from magnificent coastlines to breathtaking landscapes. Exploring this gorgeous country, which is a small country with a great network of roads, will become your new weekend hobby. If you enjoy hiking and camping, Ireland is an ideal area to live because there are many excellent, well-maintained hiking routes, countryside, and National Parks to explore.

Many people moan about Ireland’s rainy weather, but Ireland produces an unbelievable variety of wonderful fresh food thanks to its lush, green fertile terrain. To really appreciate the excellence of Irish seafood, meat, and veggies, go to your local Irish farmers market. This lush green Irish grass also yields rich and creamy milk, which is used to make some of the world’s best ice cream, chocolate, and cheese.

The cost of living is higher in larger cities around the world, but not nearly as high in smaller towns and rural locations. This is especially true in Ireland. Overall, the cost of living in Ireland is higher than the average in the United States. Depending on where you are coming from in the United States, though, you may find that portions of Ireland are very reasonable.

When you live in Ireland, you will have the ability to travel around Europe on weekends and vacations. You may be on vacation in one of Europe’s many fascinating and different countries in just a few hours. Even if you’re on a limited budget, you can easily jet off to over 190 countries thanks to Ireland’s bargain airline Ryanair.

When determining whether or not to relocate to Ireland, the cost of living is not the only aspect to consider. Consider the type of job you desire or have, as well as the pay you could earn in Ireland. Think about what kind of lifestyle you want to live and what kind of culture you want to be a part of.