Cost of Living in Florida 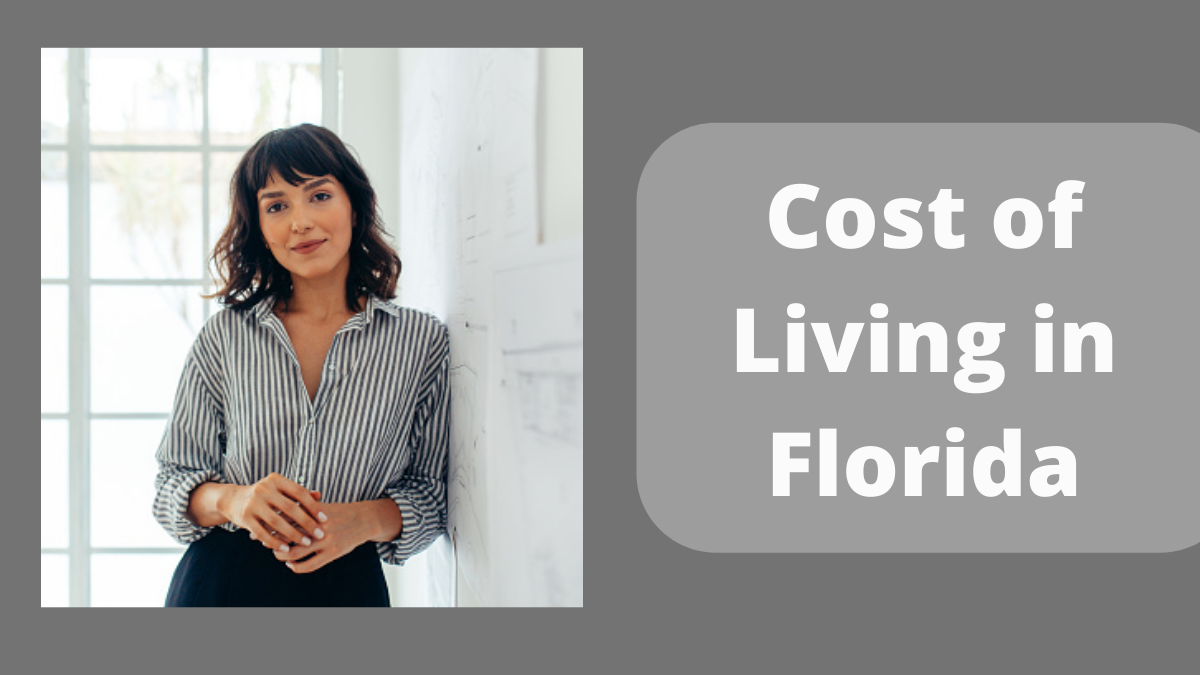 Florida is a state in the United States of America. In 1845, it became the 27th state. Florida is the most populous of the southeastern states and, after Texas, the second most populated Southern state. Tallahassee, the state capital, is located in the northwest panhandle. Florida is well-known for its beaches, theme parks, natural scenery, and orange groves. The Florida Everglades, for example, are famed for their natural beauty in this East Coast home of Mickey Mouse. Because of its plentiful sunshine and relatively milder subtropical temperature, it is known as the Sunshine State.

Would you like to live in such a place? If yes, then you must know how much it cost that will help you to manage your expenses accordingly.

How Much Does It Cost to Live in Florida?

Despite being one of the most popular vacations and retirement destinations in the United States, Florida is reasonably priced. According to the Cost of Living Index, the average cost of living in Florida is not even 1% greater than the national average. 1 However, there is still a broad range—some Florida communities have costs that are 8% lower to 18% higher than the typical U.S. city.

Unfortunately, renting is a different story. In Florida, the median monthly rent for a two-bedroom apartment was more than $1,500, approximately 27 percent higher than the national median of $1,200! 5

Keep in mind that not all of Florida is the same price. When total housing costs are included, Florida fluctuates from 17 percent lower than the national average in Daytona Beach to 51 percent more in Fort Lauder dale!

What Is the Most Affordable Area to Live in Florida?

There are several regions in Florida where the cost of living is lower than in Miami. You can also visit communities further inland from the beaches, where you will not be needed to have flood insurance, and your property taxes may be reduced. Among the cheapest locations to stay in Florida are:

Kissimmee: Located just outside of Orlando, Kissimmee offers free admission to the theme parks. Homes start in the low $100,000s, and new properties are created every year.

Cape Coral is about an hour south of Tampa and about outside of Fort Myers. The median home price is $180,000, and there are over 400 canals to choose from if you want to live on the water. You can buy a boat or take weekend getaways to Key West using the money you save by living here.

Gainesville is the home of the University of Florida and is located in the state’s central region. The college-town atmosphere keeps housing costs cheap, and its location in the state allows homeowners to readily access beaches, theme parks, and local springs. Grab your snorkel and float in the crystal clear waters with a manatee.

In Florida, utility expenses such as energy and phone use range from 13% lower than the national average in Tallahassee to 56% higher in Gainesville.

8 Miami’s utility costs are in the middle of the pack among Florida cities and are almost the same as the national average. You’re going to want to turn on the air conditioning. The Miami Heat aren’t called that for nothing.

In Florida, groceries range from 4% lower than the national average in Pensacola to 19% costlier in Miami. We’re going to Publix, so grab your shopping basket! This well-known Southeastern supermarket company was founded and is headquartered in Florida, so if you relocate to the Sunshine State, you might find yourself buying oranges and key lime pies there.

Meanwhile, Tampa is in the middle of the price range for Florida cities. In Tampa, a picnic of fried chicken, bread, salad, chips, and soda costs about $12, which is 4% more than the national average. 10 But, hey, a picnic on the beach is certainly worth it

Transportation costs in Florida range from 12% lower than the national average in Jacksonville to 11% higher in Fort Myers.

Speaking of transportation, Daytona Beach—home of all things racing, including NASCAR’s headquarters and the Daytona 500—falls into the center of most Florida communities for transportation costs, which is nearly 2% lower than the national average.

Health-care prices in Florida range from 16% lower than the national average in Jacksonville to 10% higher in Vero Beach.

Can you figure out how much income tax Florida levies? Nothing! 16 That’s correct. The Sunshine State doesn’t deduct any of your hard-earned money from your paycheck or retirement income—just one of the numerous benefits that make Florida such a popular retirement destination.
Keep in mind that Florida still has a 6% state sales tax — or 7.08% if you include the average local tax rate.
That’s not too bad, given Florida has the 22nd highest total sales tax rate in the country.
However, Florida has one of the highest telephone and gas taxes in the country, as well as certain additional specific levies.
Don’t worry if all of this tax stuff makes you dizzy.

Miscellaneous costs include a wide range of items and services such as common restaurant cuisines, apparel, entertainment, activities, and personal care. In Florida, these expenses range from 8% less than the national average in Palm Coast to 8% more in Fort Myers. 20

Gainesville represents the majority of Florida cities in terms of incidental costs, which are 3% lower than the national average. A typical “Florida Man” in Gainesville can get a pizza for $9, get a haircut for $22, and buy a new shirt for $24. For comparison, the typical U.S. city’s prices are $11, $19, and $31.

What Is the Minimum Amount Required to Live Comfortably in Florida?

Overall, the cost of living in Florida is not significantly greater than in the rest of the country. The median home cost in the United States is $231,200, but it is $237,000 in Florida, according to McKinsey.

Florida’s current minimum wage is $8.56, which is somewhat more than the federal minimum pay of $7.25. Economists estimate that Floridians need to earn at least $15.60 per hour in order to live a decent life. This equates to a yearly salary of $32,448.

Is It Costly to Live in Florida?

One thing to keep in mind is that Florida has several cities and a diverse population. Home prices in Miami and Orlando will be significantly more than comparable listings in Tallahassee or Ocala. While one city may be out of your price range, there may be a nearby place that is within your means.

Jacksonville, for example, is 7% less expensive than the national average. The cost of living in Miami and Fort Lauderdale is 11% higher.

How Can I Discover Low-Cost Housing in Florida?

If the expense of living in Florida appears to be out of your price range, you may be able to discover affordable housing in the state. Follow these hints to select a low-cost home that you and your family will enjoy.

Don’t allow your property search to be influenced by attractions. Every year, tens of thousands of people relocate to the beaches or within a few miles of Disney. You do not, however, have to be immediately next to these icons to visit them. Moving half an hour away from theme parks or resorts can help you discover affordable housing.

Expect to find no basements or attics. Many residences in Florida are ranch-style or one-story block structures. They also don’t have attics or basements very often. Basements can flood during a hurricane, while attics raise air conditioning bills. Instead, look at single-story homes with sheds and garage storage to save money.

What Is the Name of Florida?

The Sunshine State is Florida’s official moniker, which was adopted by the Florida legislature in 1970. Florida is the country’s fourth most populous state, and its lovely sandy beaches and pleasant environment attract thousands of tourists each year.

How Did Florida Obtain Its Moniker?

Ponce de Leon dubbed the region “Florida,” which is Spanish for “land of flowers,” in commemoration of the Eastertime tradition. With over 230 days of sunshine every year, it’s easy to see how Florida earned this moniker. The nickname was officially accepted by the legislature in 1970.

Is Florida a Desirable Place to Live?

The Climate is Pleasant — If you prefer outdoor activities, Florida is a terrific area to live. The climate is moderated by the fact that no section of the state is far from the water. The climate is humid tropical to the north of Lake Okeechobee. South of the lake, the climate is truly tropical.

Why Is Florida So Well-Liked?

Florida is known across the world for its beach resorts, amusement parks, warm and sunny environment, and nautical activities; sites such as Walt Disney World, the Kennedy Space Center, and Miami Beach attract tens of millions of people each year.

Florida is in the 46th percentile for safety, which means that 54 percent of states are safer and 46 percent are riskier. This research only pertains to Florida’s legal limits. For a list of neighboring states, see the table below. During a typical year, the crime rate in Florida is 39.08 per 1,000 residents.

What Are the Advantages of Moving to Florida?

– The absence of a state income tax is a significant benefit.
-Housing prices are cheaper than in many other sections of the country.
-Enjoy world-class beaches and outdoor activities.
-There is no snow, and it is warm all year.
-Residents of Florida are entitled to discounts at well-known local attractions.
-There are various retirement and snowbird communities.

So, that’s what it’s like to live in Florida. You must have a look at each section of this article to get a better understanding and plan accordingly.