Cost of Living in Finland 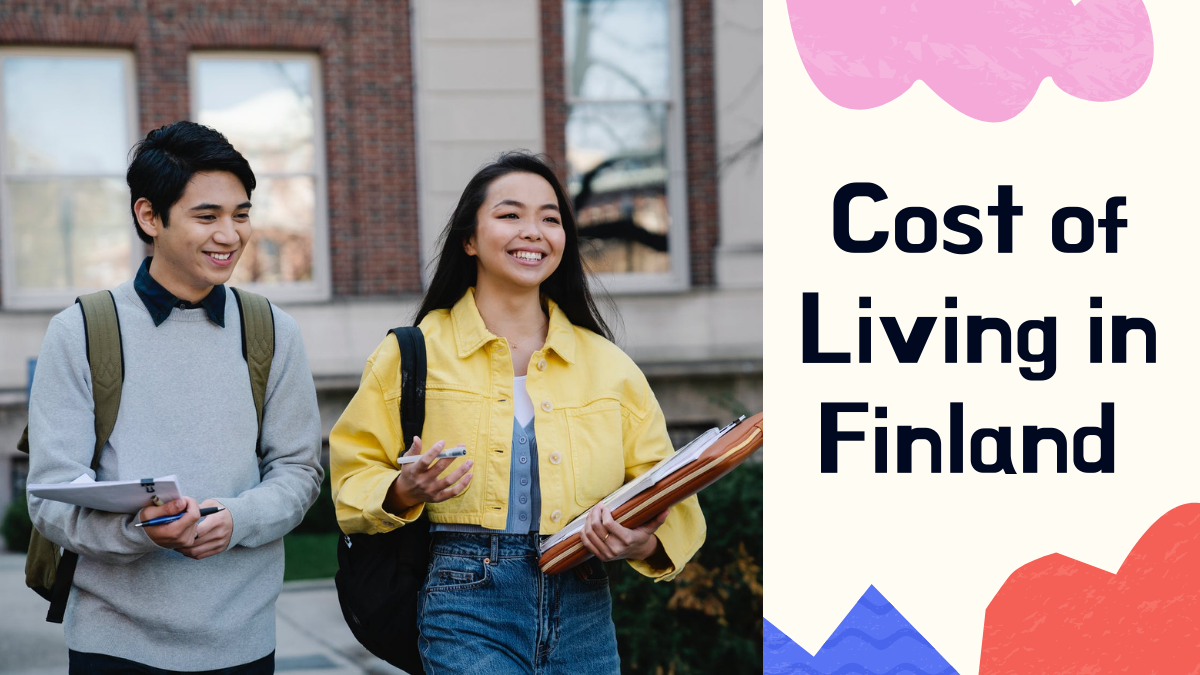 Only Denmark, Norway, Switzerland, and Ireland are more expensive than Finland among the EU Commission’s Price Comparison Program participants. Finland is the third most costly country in the European Union and the second most expensive in the eurozone. Statistics Finland is in charge of Finland’s statistics in this Eurostat-coordinated international price comparison.

The international pricing comparison supports the assumption that Finland is an expensive country in terms of private spending. Last year, Finland was more expensive than Denmark, Norway, Switzerland, and Ireland. With the economic downturn, price disparities between the Nordic nations have widened.

Sweden had a 9% lower cost of living than Finland. In comparison to a year earlier, a euro currently buys much more Icelandic and Swedish krona. The pound has also dropped against the euro, resulting in reduced prices in the United Kingdom. Late in 2008, the situation shifted dramatically.

The price levels in the European Union’s various member states range greatly. Many of the new EU members, as well as Portugal, Greece, and Spain in Southern Europe, remained among Europe’s most affordable countries. The nations or locations with which Finland is compared determine how high the Finnish pricing level seems.

Is It Expensive to Live in Finland?

When calculating the cost of living in Finland, one of the first things to consider is how much you can afford to pay each month. Estimate your monthly expenses depending on your own lifestyle to save money. Many Finns prefer to prepare their own meals or order delivery from a restaurant. They can also walk or take public transportation to work. Others, on the other hand, prefer to drive their own vehicles.

Housing in Finland is quite expensive and can suck up a substantial chunk of your income. The lower the rent, the closer you reside to the city center. If you want to spend your days outside of the house, though, you need to think about what kind of transportation you’ll need to travel to your job or school. You should also think about how much your furnishings will cost. While utilities are sometimes included in rent, many people must pay extra for them. Water, power, and Internet are included, but you’ll also need to factor in the costs of buying your own furniture and appliances.

The price level index is calculated by dividing the PPP by the exchange rate of the currency. In certain ways, the index reflects the situation from the perspective of a traveler: if a private consumption commodities basket costs EUR 100 in Finland, how much does a similar basket cost in another country? A commodity basket that cost EUR 100 in Finland, EUR 113 in Denmark, and EUR 70 in Portugal in 2008

Aside from accommodation, the cost of utilities in Finland might account for a major portion of your budget. Rental fees do not include basic utilities such as power, water, heating, waste collection, or a building’s administrative charge. For a single room, expect to pay at least EUR120 per month, though these rates can easily treble or triple. A gallon of milk will set you back about four euros per liter, which isn’t inexpensive.

How Did Finland Become the 8th Most Expensive Country in Europe?

According to a 2017 Eurostat report, Finland is the tenth most expensive country in Europe. Finland has the highest price level for alcoholic beverages (alcohol is priced in Finland at 177 percent of the EU average) and Romania has the lowest pricing for both food and non-alcoholic beverages, followed by Switzerland, Norway, Iceland, Denmark, Sweden, Ireland, and Luxembourg.

Although the results may appear discouraging for Finns, it is worth noting that since a Eurostat research in 2009, Finland has dropped to fifth place as the EU’s most costly country. According to YLE, Finns now spend more on alcohol, restaurant visits, and hotel stays than other Europeans, but they pay less for power and communications services.

The variance in taxes levels across Europe and the world is one factor for price differences. The usual VAT rate in Finland is 24 percent, while the rate in Denmark is 25 percent. The Romanian VAT rate, on the other hand, is 19%.

According to the Bank of Finland Bulletin, the high price level in Finland is typically linked to the lack of competition in closed-sector companies. Food costs in Finland began to fall shortly after Finland joined the EU in 1995, although the drop was only transitory. In reality, since the Millenium, real food prices have risen once more.

Finland has high alcohol and cigarette taxes, as well as a soft drink tax that has raised the cost of non-alcoholic beverages. There are also indicators that producers, manufacturers, and shops are charging larger margins within the food manufacturing chain. The increase in restaurant and other service prices reflects Finland’s greater wage growth relative to other euro area countries.

Overall, according to the Eurostat report, Denmark is the most costly country in Europe, with consumer products costing 42 percent more than the EU average. Bulgaria offers the cheapest prices, with prices 52 percent lower than the global average.

Is Finland an Expensive Country to Live in?

Yes. Finland’s housing costs are extremely expensive. Rent is likely to eat up a significant chunk of your income. As you might expect, rates in the country’s suburbs are lower. Before discussing a wage, think about your commute and other expenses. Furthermore, the cost of dwelling is determined by the furniture you acquire and the amount of furniture you require. Because this can be costly, it’s a good idea to shop about before deciding to migrate.

In Finland, food and beverages are also pricey. Although the cost of alcohol is roughly a third of what it is in the United States, buying locally can save you a lot of money. Despite the fact that the cost of food and drink in Finland is greater than the EU average, it is still less than the average. Even basic household necessities, such as groceries, are slightly more expensive in Finland than in the United States.

Finland’s cost of living is comparable to that of the United States, however, utilities are more expensive. Electricity and water will cost between twenty and forty euros a month for a two-person household. A modest amount of water will be required for the latter. You’ll also have to pay maintenance fees for your flat in addition to these expenses. These expenditures will be around four and a half EUR per square meter, so having some additional cash on hand is essential.

A typical flat in Finland can set you back 700-900 EUR per month. Helsinki and Pori are the most costly cities, whereas Laaperanta, Tampere, and Laaperanta are the least expensive. The average cost of a single flat in Helsinki is around 140 Euros. The cost of living in the United States, on the other hand, is roughly two and a half times greater than in Finland.

Is Finland More Expensive than Us?

Absolutely. In Finland, utility costs are another important expense. Electricity will cost between twenty and forty euros per month for a typical two-person home. Monthly water bills will be around 20 EUR. You’ll have to pay maintenance and utilities if you live in an apartment. Water, electricity, and other building operating costs are included in these rates. You will have to pay between 500 and 800 euros a month if you have a kitchen.

Housing costs in Finland are extremely high. Helsinki’s average monthly rent is EUR20 per square meter. For a two-person household, this corresponds to EUR350-EUR1,600 per year. The cost of property is high in Helsinki, and it depends on whether or not you want to furnish your home. In Helsinki, furniture costs are another big factor. Buying furniture and other household goods will also add up to your budget.

Does Finland Tax a Lot?

In Finland, prices are always provided as a single total, including all taxes. This is true throughout Finland, in stores, restaurants, and hair salons, among other places. All taxes and services are always included in the price. In a nutshell, all income, products, and services are taxed in Finland. The high taxation contributes to the funding of Finland’s welfare state, which includes free education, high-quality health care, and a social security system.

In Finland, value-added tax (VAT) is known as arvonlisävero (ALV). The most commonly used VAT rate is 24%. The VAT rate for food and restaurant services is 14 percent.

Let’s look at two little examples. If a hair appointment costs 124 €, the value-added tax accounts for 24 €. The hairdresser is left with €100. It should cover their wage, items and tools, rent, and Finnish income taxation. In Finland, if you have a phone bill of 20 €, taxes amount to 3.87 €. You are paying 16,13 Euros to the phone operator.

In 2019, the average employee paid $103.50 for individual plans and $501.21 for family plans in the United States, despite the fact that several large corporate companies covered the majority of the cost (according to the Kaiser Family Foundation). This does not include people’s out-of-pocket expenses or copays for each appointment or medical bill.

Comparison of Cost of Living With US, Germany, and Finland

When it comes to food, Finland and the United States are very similar, especially when considering the sales tax and tipping in the United States. When dining out in Finland, it is very convenient to have the tax and service fees already included. Germany, on the other hand, is significantly less expensive. We probably spend approximately half as much on groceries as we do on eating out.

The primary distinction between Helsinki and other cities is the expense of living and transportation. Other prices, such as groceries and utilities, are rather consistent across the country.

In a word, when you first start working in Finland, ask your employer whose unemployment fund you should join so that you are completely supported in your job position changes.

In Finland, you have the option of choosing your electricity provider. The Energy Authority of Finland’s impartial tool allows you to compare various power products based on your postal code. You can also make your purchase online.

In Finland, public transit is excellent, especially in large cities, and owning a car is not a “cultural must-have.” The most significant monthly expenses are usually rent and transportation. It’s critical to add them up because there’s usually a trade-off between the two. Recycling cans and bottles earn you money in Finland. In Finland, you’ll find individuals collecting bottles and cans, and when I was a teenager, I used to collect bottles on a regular basis to supplement my income.

By placing the empty bottle in the bottle deposit machine, you can receive your deposit. Every Finnish grocery shop has a machine located on the wall, generally near the entrance. You can get your deposit money at the cash register with the receipt. Of course, in order to make ends meet in Finland, you will need to work. Some people even relocate to Finland in search of their dream job. Make sure to check out my YouTube video on how to spot a fraudulent job offer from Finland. Some employment offers are simply too good to be true, so make sure you do your homework.