Cost of Living in Costa Rica Compared to the United States 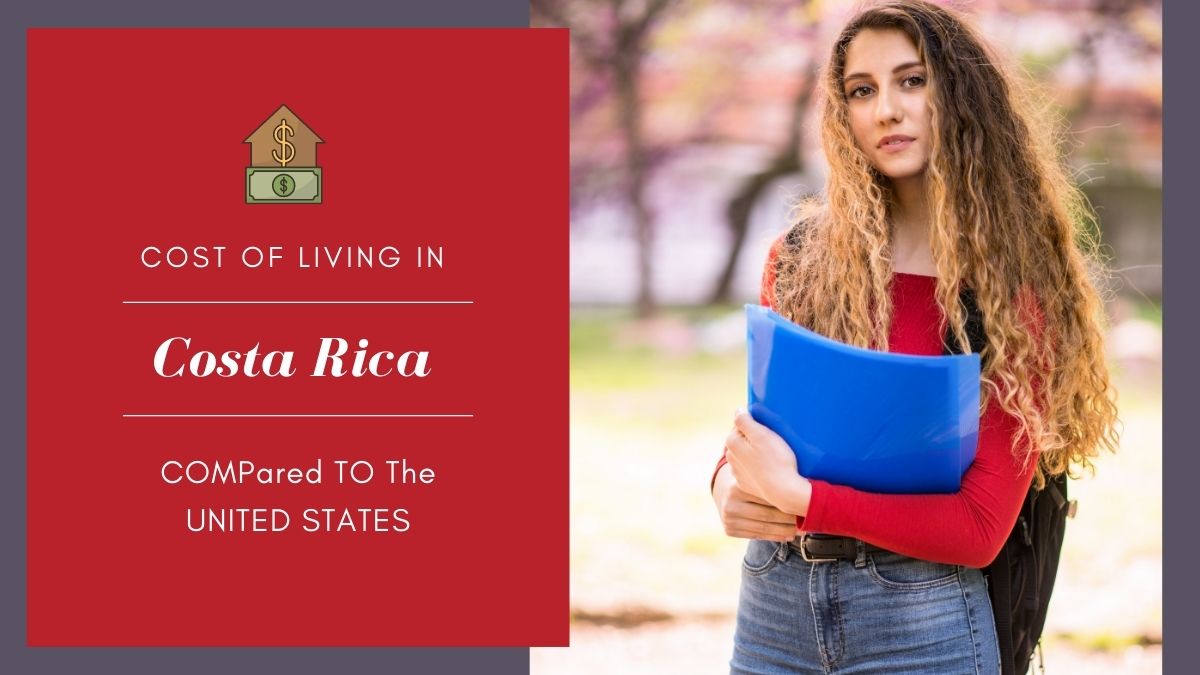 Living in Costa Rica allows you to spend almost as little or as much as you want; while many goods are cheap, North American-style luxuries may add up quickly. Despite this, many expatriates will confirm that life in Costa Rica is generally less expensive than a comparable lifestyle in the United States. Costa Rica’s most recent cost of living figures are now available, and they reveal that the cost of living in 2019 is 26.81 % lower than in the United States.

Costa Rica’s rate was 23.08 percent lower than the United States in 2018. Many expats are unconcerned about these figures since they came to improve their quality of life, not to save money. Sunsets, beaches, national parks, gorgeous people, year-round fresh fruits and veggies, wonderful wild animals, fantastic weather, excellent health care, a stable government, and other qualities they consider valuable are mentioned. San Jose‘s cost of living index is 43.62 percent cheaper than New York City’s, putting it in the 217th position out of 441 cities worldwide. Outside of the major cities, living is even cheaper. According to previous research, Costa Rica is the most costly country in Central America, so if the cost of living is the main consideration, other countries offer more to expats. Costa Rica is one of only a few Latin American countries where tap water is safe to drink, but San Jose boasts the world’s fifth most expensive bottled water.

Costa Rica has a cost of living that is 26.6% cheaper than that of the United States. Housing expenses are where you’ll observe the most dramatic price differences. Costa Rican rent is 60% less than in the United States. A one-bedroom apartment in San Jose, the country’s largest and most costly city, costs around $491 per month. Expect to pay USD 415 per month outside of the city core. A three-bedroom apartment in the heart of San Jose may be rented for around $940 per month if you prefer a larger space. In a one-bedroom apartment, basic utilities such as heating, water, and electricity would cost you an extra $73 per month. An additional $78 is charged for internet and Wi-Fi connection. Rent prices drop considerably if you choose to live outside of the metropolis. Rent can be more than half the price of a comparable apartment in San Jose if you choose a more rural location.

Rents for a well-furnished apartment or modest home in rural areas and select urban areas range from $300 to $600 per month. Renters may expect Costa Rican-style amenities, such as line-drying laundry and bathrooms with electric showerheads, for this price. A luxurious three-bedroom property near San Jose with granite countertops, Jacuzzi baths, and a water heater starts at around $1,500 per month and goes up from there.

Food prices in Costa Rica are mostly determined by individual tastes. A salad, main meal, and glass of wine will set you back $15-20 per person at a decently priced restaurant. A whole lunch, including a natural fruit drink, costs only $2-4 at sodas, Costa Rica’s version of the neighborhood mom-and-pop. Groceries are expensive for individuals who prefer cooking at home, and the price varies greatly depending on whether you buy imported or locally produced goods. For example, a trip to your local farmers’ market can cost $20-40 and supply enough fruits, veggies, meats, and seafood for a week’s worth of meals for a small family. Purchasing pricey meats, imported wines, and other premium goods at Auto Mercado, a grocery chain that specialized in high-end consumables, on the other hand, could cost a small family more than $200 each week.

Food and entertainment are also reasonably priced. Lunch for one person in a cheap restaurant in the main metropolis will set you back roughly $7.22. Dinner for two at a fancier restaurant costs about $41.30 on average. For those who prefer to cook at home, a one-pound bag of potatoes costs $0.96, a pound of rice costs $0.89, and a pound of chicken breast costs $3.55. A cappuccino will set you back around $2.65 in terms of drinks. That may seem pricey, but keep in mind that Costa Rica produces some of the world’s best coffee. In a pub, a 12-ounce bottle of imported beer costs roughly $4.13. That identical beer costs $2.69 in a store. A movie ticket for an evening showing costs around $5.06. A monthly membership to a fitness club will cost you around $58.40 if you prefer working out at the gym. These rates are based on the assumption that you live in a more costly neighborhood. Locals pay a little less outside of tourist regions.

Costa Rica’s roads and traffic are renowned, so if you do plan on driving in the city, practice defensive driving and prioritize safety. A Toyota Corolla or a vehicle comparable to it costs around $25,000 to buy. Gas will set you back $3.91 per gallon. These costs are a little more than in the United States, but they can help you save money in other ways (like housing). Costa Rica boasts an excellent public bus system that is both reliable and inexpensive. A one-way ticket within the city costs $0.66. The cost of a monthly pass is $49.56. Expect to pay $1.87 per mile plus a $1.07 base charge if you need to use a cab.

Costa Rica’s citizens and permanent residents have access to a government-run universal healthcare system (you can apply to be a permanent resident after three years of temporary residency). Costa Rican healthcare frequently rates among the world’s best, even surpassing that of the United States. Despite the fact that Costa Rica offers universal healthcare, many citizens and expats choose private health insurance. Policyholders with private insurance get speedier access to care and a larger choice of doctors. A doctor’s visit lasts roughly 15 minutes and costs around $70. A six-day supply of cold medicine, such as Tylenol, costs $6 at the pharmacy. Antibiotics cost around $40 for twelve doses.

Costa Rican medical care is both high-quality and reasonably priced. Residents currently have three options: private insurance, CCSS (Costa Rican Social Security) membership, or a combination of the two. Private medical insurance costs $60-$130 per month per person through the National Insurance Institute (INS). Insurance for a family (two adults and their under-18 dependents) will cost $30-$50 per month through the Caja’s public service. It should be noted that all legal residents are required to join the Caja. Caja payments include an obligatory pension payment for people under the age of 55, which will be paid out starting at age 65.

The Budget for the Month

Expats who want to live simply should set aside $1,500 per month or less. This budget often allows for monthly bus travel and the occasional cab ride, as well as large trips to the farmers’ market and a few restaurant dinners. Others choose to retire or live in relative luxury, hiring full-time housekeepers, driving to work, living in gorgeous mansions, and eating exotic items. Such lifestyles can easily cost $3000 or more per month in the Central Valley.

The extra money spent on transportation is quickly recouped in entertainment fees, which are often less than $5 per person for trips to museums, outdoor concerts, and street fairs. The majority of concerts and traveling shows are priced the same as they are in other nations. Costa Rica’s enormous park system, animal experiences, and gardens can delight any nature enthusiast looking for outdoor enjoyment. Tourists (those who are not legally recognized as residents or citizens) must pay an admission charge (typically $10–$20), which benefits the country’s national parks and private reserves.

The Cost of Living in the United States And Costa Rica

These are approximate estimates based on our personal experience and that of numerous families, couples, and individuals who have relocated both ways.

The “Normal” Standard of Living for the Middle Class

Living in the Lap of Luxury

On the other hand, a luxurious beach lifestyle in Costa Rica is significantly less expensive than in Malibu, Oahu, or Miami, but there are some drawbacks. In Costa Rica, a great 3 bedroom beach or beach view house with a nice lot, guest house, swimming pool, and gated access is closer to a million dollars than the ten to twenty dollars you might spend in the United States, but they aren’t quite the same. You may discover that no matter how much you pay, you can’t obtain a decent ice maker in your refrigerator, that you have no water or electricity for several days during the dry season, or that you can’t leave because the road washed away during the rainy season.

A Simple Way of Life

If you wish to drastically lower your standard of living (by commercial standards, perhaps even increase it in reality) and simplify your life by going back to the basics, no air conditioning, no hot water, cinder block, and tin roof construction, and cultivate your food, Costa Rica is substantially less expensive than the United States.

Costa Rica is a wonderful place to live, and it should be near the top of your list if you’re searching for a destination where you can stretch your dollar. It’s a wonderful way for expats, especially retirees, to get the most bang for their buck, with rent 60 percent less than in the United States. If you live frugally, it is feasible to live on $1,000 or less each month. Expect to pay around $1,500 to $2,000 for an ordinary expat, which is pretty inexpensive compared to the United States. One of the wonderful things about Costa Rica is that it is a relatively small country, which means that you can get almost anywhere in 1–6 hours from San José. The five regions that make up Costa Rica are the Central Valley, Gold Coast, Arenal, Southern Zone, and Central Pacific. The cost of living and the quality of life may change with the region. Before you narrow down your list of potential relocation locations, it’s a good idea to read about the regions.