Cost of Living in Colorado Vs Florida 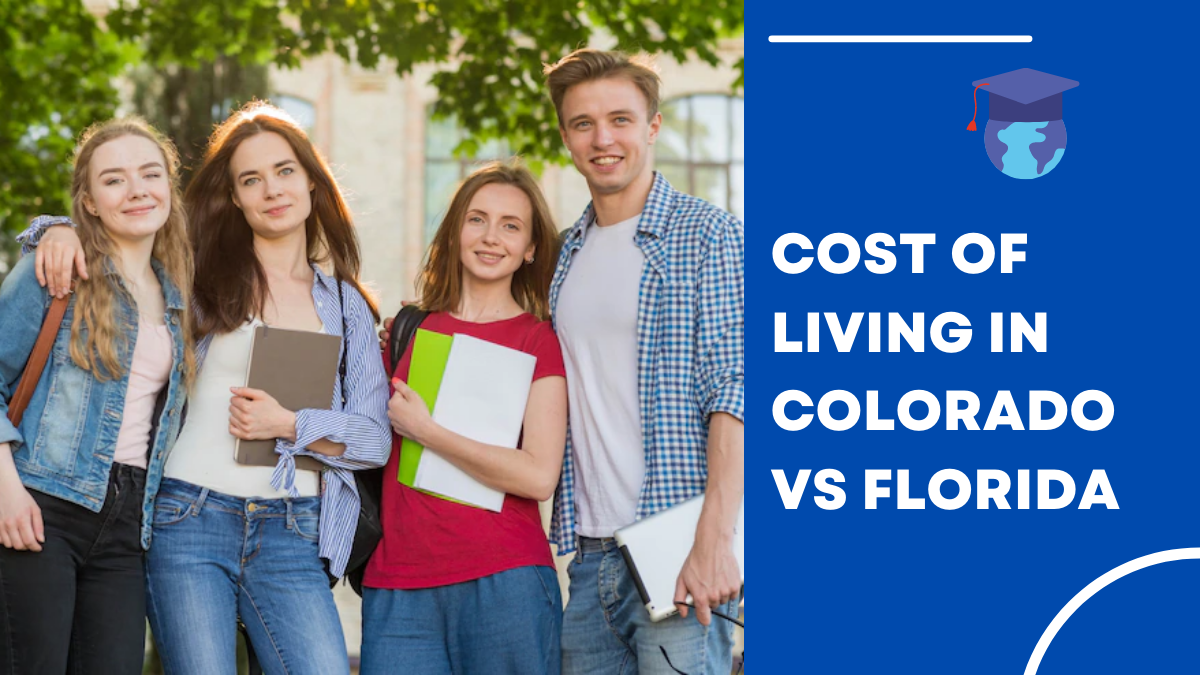 Although the cost of living in Colorado and Florida differs per state, there are many parallels and variances. Both states are known for their active lifestyles and abundance of outdoor activities. While the latter is a popular retirement destination, Colorado has a slower pace of life. Colorado’s flourishing economy provides a wide range of work options. Residents of Florida can enjoy all four seasons thanks to the pleasant temperature and world-class beaches.

When it comes to ethnic diversity, no other state compares to Florida. People of every age, religion, and background may be found throughout the state, making it one of the country’s greatest melting pots. Many people are snowbirds and transplants from other states who have migrated to Florida for the weather, career opportunities, and tax benefits, in addition to those who were born and bred in the state.

Colorado is a fairly exotic place for many people. Although the mountains are beautiful, the weather is pleasant, and the people are typically pleasant, the state frequently appears to be out of reach. The distance between New York and Los Angeles and the Rockies’ slopes is thousands of miles, making a move feel dangerous. Despite this, the state continues to develop, and with so many people moving there each year, it’s worth looking into why.

Is It Expensive to Live in Colorado?

Housing costs are the most significant element in Colorado’s high cost of living. The median price of a home in Colorado at the start of 2022, according to Zillow, is $528,211 (up to $129,458 in the last two years). In the coming years, prices are projected to continue to rise.

Colorado Springs, along with Denver, is one of the state’s fastest-growing communities. It’s substantially less expensive than Denver while yet offering many of the state’s fantastic advantages.

Obviously, whether you live in Denver or a smaller, less crowded town in Colorado makes a difference. Depending on the county you live in, the cost of living in each category may rise or fall. According to data from HowMuch.net, you need to earn more than $100,200 per year to live comfortably in Colorado. This equates to around $8,350 per month in earnings.

However, that data could be erroneous because it does not account for the health of the economy until 2020. According to more recent data, Colorado’s average annual pay is around $62,000. This could indicate that you can pay most of your bills, but there isn’t much left over for discretionary spending.

Is It Worth Moving to Colorado?

Do you want to live a healthier life? Think about relocating to Colorado. Colorado is one of the healthiest states in the country, thanks to its abundance of outdoor activities, nutritious food alternatives, and health-conscious culture. The state also boasts the lowest obesity rate in the country, according to Mind Body Green. Colorado is one of the top 10 healthiest states in the US, according to America’s Health Rankings, which cites a low number of obese individuals and children in poverty, as well as a low diabetes prevalence.

Colorado has it all, whether you’re looking for an urban playground or a rural mountain village. Denver, Boulder, Fort Collins, Aurora, and Loveland are among the most popular cities. These cities are not just convenient to the great outdoors – as well as some of Colorado’s most popular attractions – but they are also thriving urban centers in their own right. Colorado’s cities are bustling with activity, with world-class museums, renowned restaurants, and a thriving arts and entertainment scene.

How Much Does It Cost to Live Comfortably in Florida?

Florida was the most popular state for people to relocate to in both 2020 and 2021, according to new research. However, with the rising cost of living across the country, especially in Florida, it can be difficult to determine how much money you need to make to get by. Florida may be affordable despite being one of the most popular vacations and retirement destinations in the United States. According to the Cost of Living Index, the average cost of living in Florida is only 1% higher than the national average.

When compared to the typical U.S. city, however, there is still a large variety of costs—some Florida communities score 8 percent lower to 18 percent higher in cost. In Florida, utility expenses such as energy and phone use range from 13% lower than the national average in Tallahassee to 56% higher in Gainesville. In terms of utility expenses, Miami is in the middle of the pack among Florida cities, and is nearly identical to the national average. You’ll want to turn up the air conditioning, trust me. The Miami Heat aren’t called that for nothing.

One of the numerous attractions that make Florida such a popular destination to retire is that it doesn’t take any of your hard-earned money out of your paycheck or retirement income.

Keep in mind that Florida’s state sales tax is still 6% — or 7.08 percent if you include the state’s average local tax rate. However, considering the percentage, Florida is only the 22nd highest in the USA in terms of overall sales tax. The negative is that Florida has some of the highest telephone and gas taxes in the country, as well as several additional unique taxes. 19 Don’t worry if all of this tax stuff makes you dizzy. Connect with one of our certified tax advisors to learn more about how moving to Florida will affect your taxes.

Is Florida Cheaper Than Colorado?

Each state’s cost of living is mostly determined by the cost of ordinary products and services. Colorado is far less expensive than Florida in terms of healthcare, groceries, and transportation. Only groceries and utilities are marginally more expensive in Florida than in Colorado. Nonetheless, both states’ housing expenses are lower than the national average. Although a home in Colorado will cost more than the national average, it will be easier to sell in Florida.

Despite the disparities in income levels, the cost of living in Colorado and Florida is significantly different. The cost of living is greater in Florida. The cost of health care is significantly higher than in Colorado. Both have medical costs, but Colorado’s healthcare is cheaper. There are also more reasonably priced schools and hospitals, with a national average of 100. Furthermore, both states’ housing costs are higher than the national average.

Which One is a Better place to Start a Living, Florida or Colorado?

Although Colorado has the highest median property price, most people find Florida to be far more affordable. However, due to taxes and transportation costs, the cost of living in Florida is higher.

Because these expenses are higher in Florida, it’s a good idea to compare the cost of living in Colorado and Florida. Similarly, daycare costs in Colorado are greater than the national average. If you have a child, childcare in Florida is substantially less expensive.

Colorado’s cost of living is 18 percent greater than Florida’s, and its median rent is 20 percent higher. Housing is less expensive in both states than it is in Florida, but gas is more expensive in Florida than the national average. Transportation is a need in both states, but the cost of a car is the most important concern. There are numerous advantages to owning a car, but it is not inexpensive.

Florida has a higher cost of living than Colorado. Property taxes in the state differ per city. The state’s average rent of $1,175 is higher than the national average, and the average rent in Miami-Dade County is approximately 2% higher than the national average. While the cost of living in both states is higher, the cost of housing and transportation is identical.

Is the Cost of Living Better in Colorado or Florida?

As a result, Florida is more expensive than Colorado, but Colorado has lower home costs and is more affordable for low-income residents. Its taxes and utilities are less expensive than those in Florida, making it an ideal area to call home.

Colorado has a higher median price for homes than Florida. As a result, housing costs in Colorado are lower than in Florida. As a result, house buyers in both states will pay a higher price. Furthermore, the state will need additional money to hire someone. You’ll also have to pay more for rent and utilities than you would in Florida. If you’re concerned about transportation costs, Colorado is a better place to live than Florida.

Denver, Colorado is a great place to visit if you enjoy sports. You may attend a variety of games because there are football, baseball, basketball, and hockey teams. Keep in mind that tickets are typically expensive, so you’ll want to budget carefully for your entertainment. On sometimes, you may be able to find discounted tickets on the internet. Some people buy a season ticket with a group of friends and alternate attending games. Sports tickets can raise the cost of living in Denver, CO, but they are well worth it if you are a serious sports enthusiast. The games are frequently broadcast on local television in Denver, CO, and you can host a gathering of friends to watch the game together.

After the aforesaid research, it is pretty clear that Colorado has a decent cost of living compared to Florida. The average cost of living in Colorado is $5,598.53 in 2021, and it is increasing every day. Is it possible to live comfortably on this amount of money now that the minimum wage has increased and the average statewide pay is $62,000?

You will have to pay extra if you wish to buy a house, pay for food, or fuel that costs more than our estimations! To comfortably finance everything, we recommend earning at least $8,000-9,000 per month if you are planning to live in Colorado.

The typical household income in Florida is $55,660. However, just because you earn that much money doesn’t imply you can afford to live anyplace in Florida—at least not comfortably. If you want to live comfortably in Florida, you must first ensure that you can afford your biggest expense—housing. Whether you opt to rent or buy in your new city, follow the 25 percent rule: never take a residence that has a monthly payment that exceeds 25% of your monthly take-home salary.