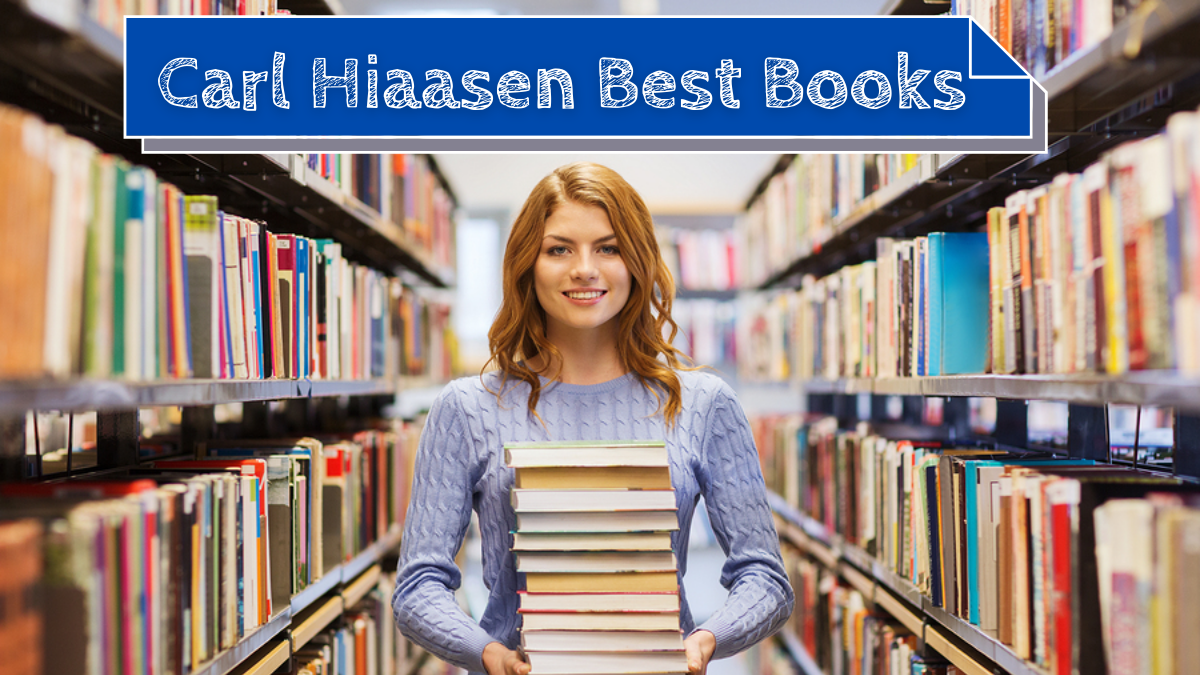 Carl Hiaasen born and raised in Florida is an American Journalist and Novelist and is recognized internationally for his notable works such as Bad Monkey, Razor Girl, Stormy Weather, and many more bestsellers. Hiaasen began writing novels in the early 1980s, and since then he has produced many fascinating mystery thrillers and other interesting tales with twisted plots that intrigue readers.

Hiaasen has also written many books especially for young readers such as Hoot, Squirm, Scat, and many more. Hiaasen has books for readers of all ages and can be a great pass time. If you are looking for the best books by Carl Hiaasen, then here are the top-10 books that you must read.

Hiaasen’s Razor Girl is an entertaining novel that revolves around the character of Razor Girl, a con artist known by the name Merry Mansfield. Merry is specialized in helping a group of the mob in kidnapping people, all she has to do is ask them for a lift, and the rest is taken care of by her mates. Everything goes well in her life until one day, instead of kidnapping Martin Trebeaux, owner of a private beach renourishment company; she ends up with a man named Lane Coolman, who is a Talent Manager of the famous reality TV show run by the star Buck Nance.

This kidnapping of the wrong person gives rise to unexpected events in the novel that arise tension and are equally interesting. Razor Girl has such an engaging plot that readers will not leave the book unless they have reached the final outcome.

Bad Monkey is the novel that brought Carl Hiaasen his fame. A New York Times Bestseller, this novel is a blend of mystery and a hilarious plot. The novel revolves around the main character Andrew Yancy who has recently been suspended from his Detective department and has been demoted to the position of Restaurant Inspector. When Yancy comes across a severed arm in the morgue, he is determined to find the cause behind the murder in order to regain his respect and position at the department.

No one actually is willing to help Yancy with his investigation, but there is one medical examiner by the name of Rosa who is ready to work for him and help him out. Will Yancy be able to trace the clues and find the real culprit and the body that the arm belongs to? The novel has much to unveil and a lot more hilarious incidents to make readers laugh out loud!

Carl Hiaasen’s Skinny Dip is not only an interesting novel to read, but also has a well-weaved plot that begins with attempted murder. Chaz Perrone is a Biologist for the state of Florida, but he is not the good man he seems to be. The novel begins with Chaz throwing his wife Joey Perrone overboard, from the deck of a cruise ship. But what puzzles the readers is why would a husband dare to commit such a heinous crime?

Joey luckily finds some things nearby to float on, and hang on to her dear life, and the whole novel revolves around her plot to seek revenge from Chaz, and also find the motive behind his attempt to murder. Hiaasen uses his unique style and rich elements in the novel to provide readers an amazing read-time.

Hoot by Hiaasen is a book specially written by him for young adults, that is a Newbery Honor winner, and stood as a number in New York Times Bestseller. This modern classic features a young kid named Roy Eberhardt who unwillingly moves from Bozeman Montana to the depressingly flat town of Coconut Cove. Hoot was published in the year 2002 and was later adapted as a film by the same name in the year 2006.

The plot revolves around Roy, his problems adjusting to the new uninteresting life, and facing bullies at school. One day, when he encounters a bully named Mullet Fingers, many unexpected events follow in his life. Will Roy be able to accept his new life and make friends? Will he be a fearing or daring kid when it comes to bullies? Roy has a lot to tell and show to the readers. Hoot is an ideal read for High School goers because many of you will relate to Roy’s struggles.

As the title of the novel suggests, Stormy Weather features the aftermath of the hurricane “Andrew” that had hit the Southern Coast of Florida. The many characters in the novel that are focused on by Hiaasen come to the spot of destruction to take advantage of all the chaos that has been created. Some are criminals, some are greedy, and some are just saving their lives, Hiaasen takes readers on a unique journey of exploring the different situations and motives of characters involved in the plot, and how a natural calamity has brought chaos into the lives of the humans and animals.

This remarkable work of fiction has a lot to depict and is equally entertaining, Stormy Weather provides readers the opportunity to explore the aftermath of a calamity and other evil intentions of human minds.

Squeeze Me follows the monster-sized Burmese python who has come to nearby at a tree near the residency. A New York Times Bestseller, Squeeze Me depicts a hilarious plot that revolves around the disappearance of elderly widow Kiki Pew Fitzsimmons from her residence at Palm Beach, Florida, and not long later the deadly and gigantic Python is spotted with a bulge in its stomach. Angie Armstrong owner and operator of Discreet Captures realizes that it is in the stomach of the deadly Python where the missing widow is.

The novel is shocking, includes a lot of intriguing events along with a touch of tension. The plot is so engaging that it will keep the readers glued till the end. This novel can be read by readers of all ages and will undoubtedly impress them.

Next on our list comes the Nature Girl is known as Honey Santana, who is a self-proclaimed “queen of lost causes”, and helps people get rid of their stress, indifference and takes them away from the world of irresponsibility into the wilderness. Honey takes Boyd Shreave and his mistress into the mysterious and wild Ten Thousand Islands of Florida however, she is unaware of the dangers that await her because she is being followed mysteriously by her former employer and ex-husband.

The plot is unique, presents readers with a story that they have never read before, and lets them explore the wilderness of Florida along with the evil intentions of several characters. Is Honey in danger? Or something unexpected is going to happen to her? Readers would find the answers hidden inside the novel.

Another book by Hiaasen on our list for young readers, Skink- No Surrender is ideal for teens who are between the age of 12 to 15 years. This novel was a National Book Award Longlist Selection and features an utterly engaging adventure tale of Richard who on discovering the absence of his cousin’s sister Malley, and her runaway with a man she met on the internet, is determined to find and rescue her. Richard contacts a man named Clint Tyree who is better known by the name “Skink”, and is a former governor of Florida and has turned into an environmentalist. Richard seeks help from Skink to resolve this mystery and help him find Malley, and together they set on a madcap journey that unfolds many secrets.

This nail-biting adventure of Richard and Skink is bound to leave young adults in awe.

Hiaasen’s Strip Tease is a book for adults that depicts the character of Erin Grant a divorced mother who is fighting for regaining custody of her daughter. Her husband is a criminal and a drug addict, and Erin works at a strip club to pay for her bills and custody attorney. But when an unexpected accident occurs at the club, Erin’s life takes a different turn.

This deeply political novel by Hiaasen brings out the true picture of Congressmen who are obsessed with sex and are blackmailers and murderers who roam around in disguise.

The last book by Carl Hiaasen on our list Tourist Season takes readers into an exotic trip to South Florida that revolves around the characters of a wanna-be Cuban terrorist, a black former Miami Dolphin football player, and a Seminole Indian trying to occupy the lands of Miami and making it dangerous for tourists to visit. These mysterious characters want wilderness to return to Miami and restore its beauty like their ancestral home, but everything doesn’t turn out the way they plan.

The plot of the novel may sound serious, but it has a lot of comic elements involved along with a series of serious events. A thoroughly entertaining novel, Tourist Season will take readers on an amazing journey into the wilderness and entice them.