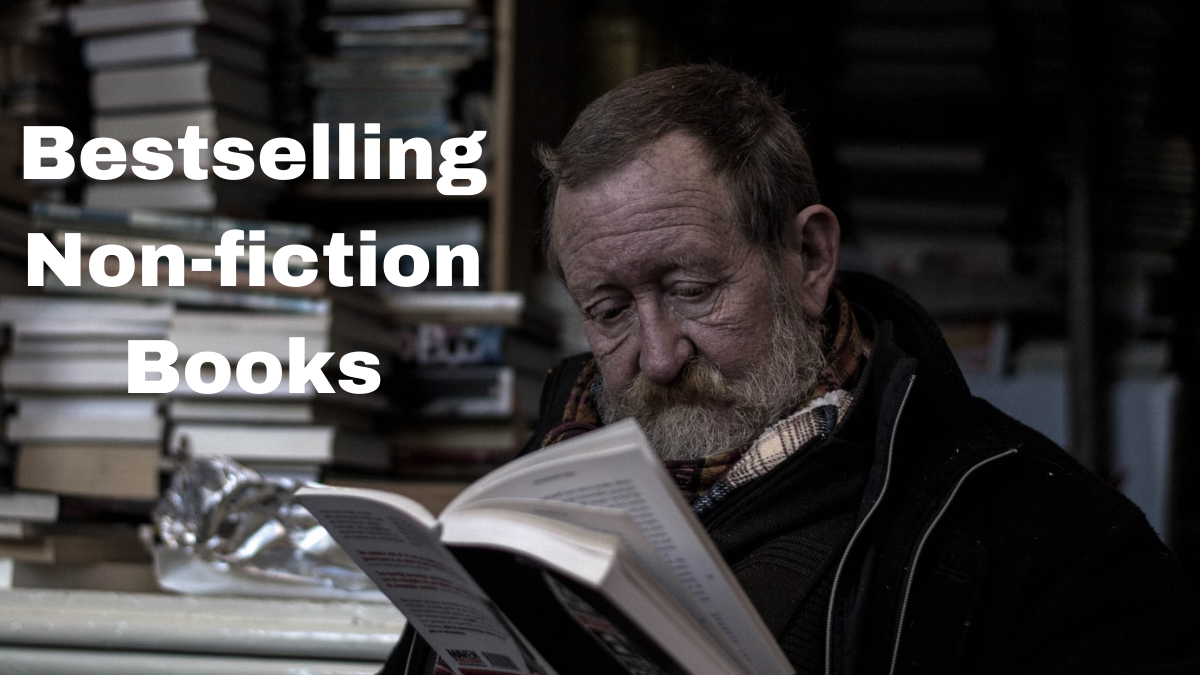 There are many types of readers around the world, and some love to dive into the world of imagination and become a part of fascinating fictional journeys that are too illusionary for reality, whereas as there are other readers who love to read books that they can relate with the real world around them and their personal lives. Non-fiction is sometimes preferred more by readers because it records real events or portrays a real person.

For the lovers of Non-fiction, we have arranged a list of must-read bestselling books that should definitely find a place amongst your bookshelves. These popular, top-rated books shall deeply touch readers, for they are based on real events and persons.

1. The Warmth Of Other Suns by Isabel Wilkerson

The Warmth Of the Suns by Isabel Wilkerson is a deeply moving novel that features “Great Migration” between 1914 and 70. After years of painful struggle, the African Americans began moving from the South to the Northern and Western states of America. Moving out from the racism and painful past of Jim Crow South, Wilkerson portrays the story of three individuals- Ida Mae Brandon Gladney, George Swanson Starling, and Robert Pershing Foster, who take readers to the historical times.

Ida Mae was a sharecropper’s wife who fled to Chicago from Mississippi; George managed to escape from a notorious Sheriff and came to Harlem, New York, whereas Robert, a former Army Captain and Doctor, escapes to Los Angeles from Louisiana to chase his “American Dream.” Although these individuals are strangers to each other, they unknowingly share a connection, all of them escape the South in search of freedom and a “dream” of a better tomorrow. Wilkerson beautifully pens events, past and present incidents of these characters that give readers a complete view of the times of migration and struggle of blacks in a white dominating America. It is a novel that will touch readers emotionally and perhaps connect with them somewhere because we all seek freedom in some part of our lives.

2. The Anthropocene Reviewed by John Greene

John Greene’s The Anthropocene Reviewed is insightful non-fiction that deals with the recent geological age and how today’s humankind has profoundly reshaped today’s planet and affected biodiversity. A book that contains a series of ground-breaking essays and reviews regarding the different facets of the human-centered planet, Greene explores the factors from QWERTY keyboard, Staphylococcus aureus to the Taco Bell breakfast menu. If there is a truly engaging book and relatable to our everyday lives, it is this book by John Greene.

3. The Splendid and the Vile by Erik Larson

Erik Larson’s The Splendid and the Vile recalls the moment of Winston Churchill being appointed as the Prime Minister after Chamberlain is forced to resign his post due to his failed strategies towards Nazi-occupied Germany. Chamberlain quickly resigns, and himself declares Churchill as his successor. The King also agrees to Chamberlain’s decision and gives blessings.

The novel throws light on Churchill’s taking over major responsibilities in one of the most crucial times of Britain, his commands, and his handling of the situation when the Nazis bombard England. This novel paints a picture of the past events, and involves readers in a series of tension, and makes them witness those real-life events through the mind’s eye.

While working for the American Civil Liberties Union, Michelle Alexander witnessed the racial bias that still prevails in the Criminal Justice System against second-class citizens, mainly the blacks. This unethical bias reminds Alexander of the Jim Crow Laws that prevailed in South America during the 19th and early 20th centuries, which meted African Americans’ inhuman treatment. Alexander notices that this racial bias marginalizes colored races in the 21st century and hopes to present the picture to the world.

Alexander begins with the history of racism that strongly ruled America and how millions of people were painfully affected. She explores the Jim Crow Laws and the consequences they brought to the people to the present day scenario where racism still plays a role in judgment, and there remains a difference, a sense of hatred and inequality. From Civil Rights, racial segregation to witnessing the evils of the past still in relevance, Alexander takes readers on a shocking journey that unveils the truth of modern American Society.

5. A Woman of No Importance by Sonia Purnell

Sonia Purnell presents the world with an “untold story of an American Spy,” a brave woman who may not be of any importance to the world but helped win World War II. Purnell reveals the woman’s identity who remained unidentified amongst the crowd for decades, Virginia Hall, who was a Baltimore Socialite. Virginia became the first Allied female spy who infiltrated the enemies’ territory through her bravery and wit.

The novel begins with a glimpse of the war-torn village in France where people are in a hustle to save their lives, and Virginia is seen to make way through the crowd in an Ambulance. Despite being attacked by the German troops multiple times and having an amputated leg, she sets on a mission like a soldier to save people’s lives. The novel then moves its focus to Hall’s childhood, who hoped to work as a diplomat in Foreign Service. This leads Hall to unexpected connections and her almost movie-like training to become a spy and save countries from being ruptured. A truly captivating story of a brave woman needs to be explored by every reader of the world. A woman worthy of praise, Hall will serve as an inspiration to many young women to go beyond conventions and overcome the impossible.

6. Just Mercy: A Story of Justice and Redemption by Bryan Stevenson

A real-life story penned by Bryan Stevenson, Just Mercy: A Story of Justice and Redemption, takes readers into deeper insight into a case that brings out many dark truths of the American Society. Stevenson, in his novel, depicts how he had come to get attached with criminal defense law and defending death row prisoners and how it had led him to discover some ugly truths. Stevenson records how he realized that the American Judicial system punishes poor citizens more severely than the rich. This realization he depicts clearly with a case of Walter McMillian, a black man who is wrongly accused of the murder of a white woman and is sentenced to death row.

Stevenson links Walter’s punishment to America’s racial history and its effect on the judicial system. While focusing on the case of Walter, Stevenson also introduces other gruesome cases simultaneously to provide a better picture of his causes. Will Stevenson be able to save an innocent convict like Walter? Will he be able to bring changes to the system and society as a whole? The readers will discover answers to these questions in the novel.

A captivating autobiography of the Academy Award-winning actor, Matthew McConaughey, through his book, takes readers into an unconventional memoir of his first 50 years of life that is narrated with honesty and wisdom. From his ups and downs to the most memorable and heartbreaking moments of his life, Matthew gives readers an amazing opportunity to explore his personal life, how he had been as a child, to how he went into the “hall of fame.” Mostly, Matthew tells about the lessons he had learned from life, which can prove to be very inspiring to readers, especially the young generations. Know about Matthew’s success, failures, joys, and sorrows, and how he dealt with all those situations through his principles and the lessons he had learned from them. A greatly inspiring book, Greenlights is a must-read for all.

Based on a true story of murder, Gregg Olsen, through his book If You Tell, presents readers a tale of an “unbreakable bond of sisterhood” and explores some “family secrets.” Olsen features the true story of three sisters Nikki, Sami, and Tory Knotek, who survived the tortures imposed while living with their psychopath mother, Shelly Knotek, who is eventually the culprit behind the infamous Raymond torture killings in Washington.

8. If You Tell by Gregg Olsen

The novel was written carefully by Olsen after going through intensive research and interviews, which eventually made the novel very popular among readers worldwide. The novel mainly focuses on the relationship shared by the sisters for their shared abuse and a detailed overview of Shelly, her life from childhood to finally reaching behind bars. Readers through the novel will discover the secrets of the Knotek family and what led a mother to become such a murderer.

9. A Promised Land by Barack Obama

Another impressive autobiography on our list, Barack Obama’s A Promised Land, portrays the political life of Obama, his childhood, and his journey from a common person to the President of one of the most powerful countries in the world.

With a riveting and deeply personal narration, Obama takes readers to explore the story of his life as a child. As a young man on his quest to discover his identity, he miraculously becomes the country’s leader. The novel is honest, introspective, and beautifully written, everyone has admired Obama for the man he is, and through this book, readers will happen to admire him even more.

10. Every Man a Hero by Ray Lambert and Jim DeFelice

Every Man a Hero provides an amazing opportunity for readers to uncover an unbelievable story of heroism from 98 years old Ray Lambert, a decorated WWII medic and helped save the lives of many brave heroes of D-Day.

Lambert recollects the horrific day now history, the first wave at Omaha Beach that occurred 75 years ago, how he had to part from his brother- a soldier, on the bloodiest shore of Normandy. After saving dozens of lives even after being wounded himself, Lambert narrates an incident that is hard to believe and will send a chill down the spine. The novel is not just the story of a single man, as Lambert says; it is the story of “Everyman” who sacrificed, fought, and survived the war like a hero.