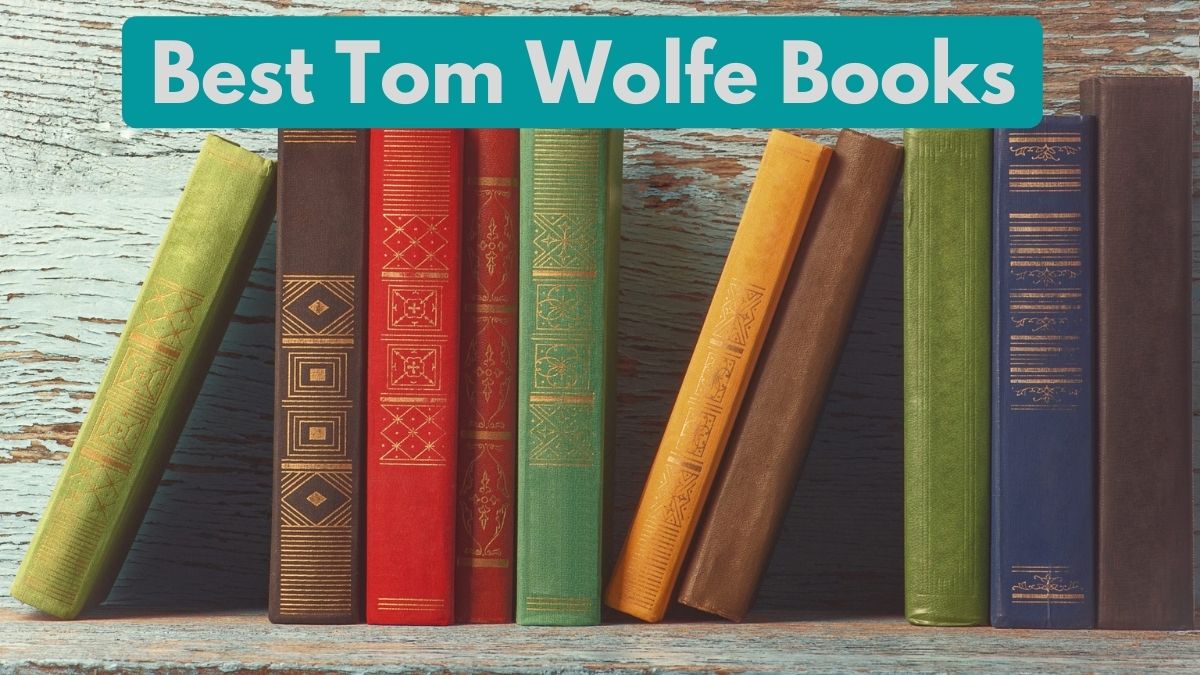 The New York Times Bestselling author, Tom Wolfe is a celebrated American Novelist, Journalist, and Social Commentator who has won hearts with his witty and expressive novels and short stories. Tom’s works of Fiction and Non-fiction became so popular across the country that he became an influential figure in Modern American Literature and came to be known as the “Father of New Journalism” for his revolutionary, unique ideas in the field of Journalism.

Wolfe’s stylistic works gain much of his wit from the background of Journalism, the knowledge and excellence in this field have bloomed many ideas for his novels and stories, that have later become popular among readers. If you are someone looking for something different to read that is equally intriguing and impressive, then Tom Wolfe should be your first choice. Wondering which one will be the best? Have a look at this list of best books by Tom Wolfe that should definitely find a place amongst your bookshelves.

1. The Bonfire of the Vanities

A New York Times Bestseller, The Bonfire of the Vanities is set in 1980s New York and focuses on the character of Sherman McCoy, the young investment Banker who lives lavishly in his fourteen-roomed apartment. Sherman has everything that a successful man needs, living with his young daughter and his wife who spends extravagantly, he struggles to maintain the cost of his family’s increasing demands. But when he is indulged in an extramarital affair with a young woman named Maria, the wife of another millionaire from Park Avenue, things begin to become complicated.

When one wrong turn at the airport to pick up Maria turns into an accident leading to striking a young man, Sherman and Maria try to keep this accident a secret, but the consequences turn out to be different. Sherman’s legal issues begin to impact his work performance a lot, which begins to affect his career drastically. Will Sherman be able to return to his carefree life? Or this accident will result in his downfall? There are more interesting events that the readers will come across while finding out the answers to these questions.

A novel of Tom Wolfe that received much attention for its plot and became a part of many controversies for portraying America’s growing movement of young people called “Psychedelic Movement”, The Electric Kool-Aid Acid Test will take you back to the times when the country was witnessing the rise of drug use, strange music and transcending from reality. This disturbing movement was rapidly affecting young minds, and encouraging them to participate in experiences that were not at all worthwhile.

Wolfe chooses the character of Ken Kesey as the main focus of the plot, the man who was behind the rise of this weird movement. A novelist who receives rapid fame from publishing his book One Flew Over the Cuckoo’s Nest, Kesey goes on to promote the intake of LSD (a drug) and attracts numerous followers to experience this state of ecstasy. The novel goes on to feature the consequences of Kesey rising into fame, his exploration of LSD, Marijuana, and Acid Tests reach such a stage, that will leave readers in shock. The novel is engaging, and beautifully portrays the rise and fall of Ken Kesey.

Another work of Non-Fiction by Wolfe that rose into fame and controversy, Right Stuff follows the account of the early American Space program, and the emergence of Test Pilots after World War II, who pushed limits of human capabilities. This American Space race gave rise to the exceptional group of astronauts called Mercury Seven, who were determined to bring back the glory of America.

After two World Wars, Nixon’s exit, failure in Vietnam War, America had nothing to be proud of and was on the verge of being shattered and shamed. Driven by heroism, the daring Test Pilots of America crossed their limits and became determined to bring back the lost glory of the country. These Pilots were later going to become the exceptional seven Astronauts who were going to step into the unknown, the “space”. The book is thoroughly captivating, and indeed features some “Right Stuff” that you would love to read.

A work that can rather be held as a satire on Class and Status, the phrase “radical chic” was coined by Tom Wolfe in the year 1970 when Leonard Bernstein gave a party for the Black Panthers at his duplex apartment on Park Avenue. Hoping to raise money for the Black Panthers Defense Fund, Mr. and Mrs. Bernstein throw a bash at their thirteen-room Park Avenue apartment. This bash invites a group of people who define the “Class” and “Status” of the modern American Society, and among this group was Tom Wolfe himself. Witnessing all the flaws and pretensions of the hapless City  Bureaucrats, the Flak Catchers, Wolfe presents the readers with “Black rage”, “White Guilt”, political stances in his two hilarious essays that comprise the book.

A political novel that mostly focuses on social criticisms, Radical Chic and Mau-Mauing the Flak Catchers are so full of wit and symbolic events.

A collection of essays and Journalism published in the year 1968, The Pump House Gang brings into spotlight the story of Jack Macpherson and his gang of Surfers who became the prime examples of the subcultures, that Wolfe explores in his book. The group that came to be known as “The Pump House Gang”, Wolfe depicts the tale of a group of teenage surfers in La Jolla, California, who set their own lifestyle of surfing, and with that, become the subject of the author, for portraying 60’s notables, young folks in particular, who cried out for status, understanding, and most of all, celebration. This collection of notable essays is worth reading because it explores many interesting events and areas, while largely portraying the Journalistic abilities of Wolfe.

A Man in Full centers around the character of Charlie Croker, who is sixty years old, but so full of energy and lust. He has come a long way to build the powerful empire he owns today and takes much pride in. Even at the age of 60, Croker maintains the fame of his youth days, when he was called “ Sixty Minute Man” for the ability to play all sixty minutes of every football game.

Set in Atlanta, Georgia, Charlie comes from humble roots, but his empire begins to go through some serious tensions when he engages in an overextended bet with Armholster, and later when his daughter Elizabeth Armholster accuses Fanon of date-raping her. These complications in the plot lead to racial tensions, the intrusion of law, and the struggles Charlie to maintain his riches. The plot is undoubtedly captivating and will keep readers glued to its engaging events.

The National Bestseller, Hooking Up is another notable collection of Tom Wolfe that lets readers explore many things at a time, from lurid carnivals, teenage sexual manners, to the fundamental changes in the modern world that have resulted in replacing the aesthetic essence of sex, and replaced it with “hook-ups”. This rapid change around America by the year 2000 worried Tom, and hence he presents his heap of ideas and thoughts on this evolution of Hooking Up that he himself records from young boys and girls.

Exploring the fields of Genetics and Neuroscience, and focusing on the dawn of a new millennium, which is very lurid, Tom presents readers with an amazing collection that readers would absolutely love to read and explore.

The Painted Word is a celebrated work of Tom Wolfe where you will come to across Greenberg and Rosenberg, and their contribution to Modern Art. In this novel, Wolfe finds an opportunity to critique art, and explore the various modern movements of art including Abstract Expressionism, giving birth to styles of art like “Minimal”,  “Pop”, “Conceptual” and so much more.

Exploring much of Contemporary Art, and modern Artists, this book serves as an amusing read while at the same time portraying Wolfe’s interests and knowledge of art.

The first book was written by Tom Wolfe that satirizes American trends and celebrities, The Kandy-Kolored Tangerine-Flake Streamline Baby is a collection of intellectual essays that capture the spirit of the city of Las Vegas, which boomed with Casinos and lavish lifestyles. Focusing on the time between the 1960s and 70s, Wolfe through this collection presents readers with a picture of Vegas, where people led a new, extravagant lifestyle of gamble and fashion, hardly bothering about the “Elite” culture of the past.

This collection of essays is fascinating for it features some interesting characters, and with that, Wolfe lets readers explore Vegas in its boom.

The last book on this list, The Purple Decades is all about an ample selection of Tom Wolfe’s writings from the Sixties and Seventies, that records most of his well-known works. Although the collection did not receive as much fame as Wolfe’s other works, The Purple Decades is important for it lets readers explore his writings in the best way. These critically acclaimed publications, including the complete text of Mau-Mauing and the FlakCatchers, and other notable essays are a treasure for lovers of Wolfe.

That’s all for the list of top-10 books by Tom Wolfe, that are absolute must-reads and will fascinate you in the most unexpected ways.