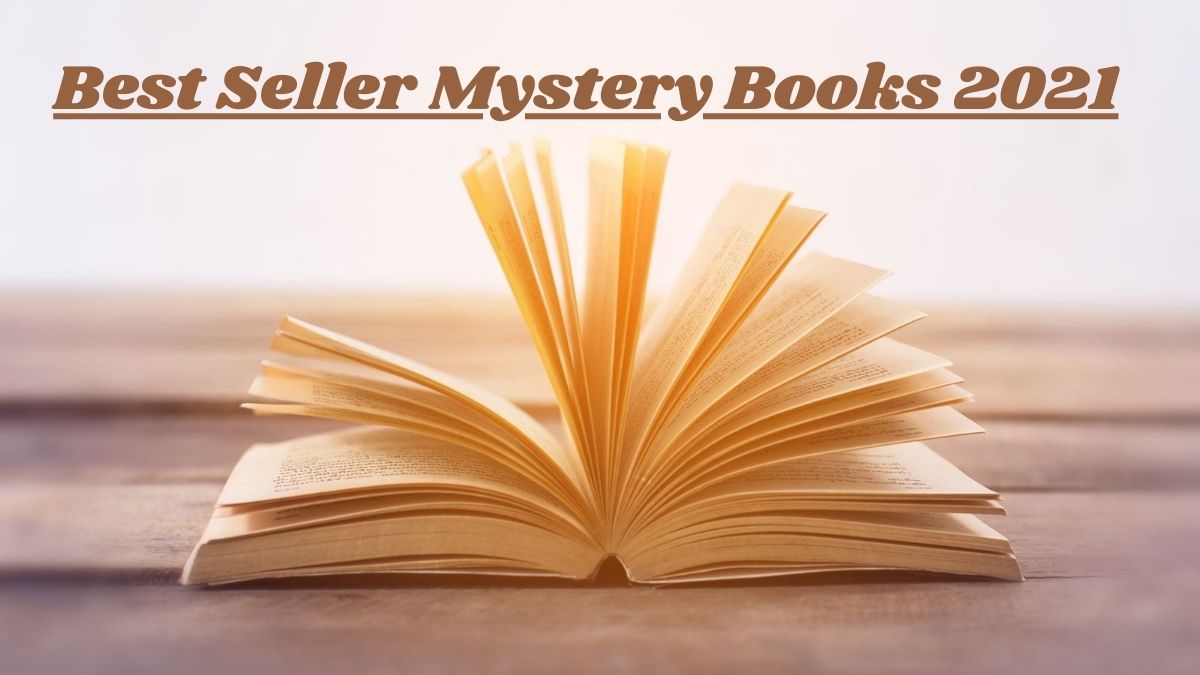 Mystery, the most intriguing genre when it comes to reading books and is a favorite of many. A genre that is most preferred by readers for its involvement of suspense and thrill, and its ability to keep anyone glued to hundreds of pages unless it has come to an end.

There are thousands of mystery books that have proven to be so engaging that they had brought much fame to authors. Since mystery novels mostly revolve around crimes, murders, suspense, and thrills, they have oftentimes found their way to the “big screens”, adapted as movies or series. Mystery novels are so popular among readers because it always tricks your minds, you keep on guessing the results, and end up to be completely wrong because the endings are often extremely twisted and the most unexpected.

If you are one of those readers who love to read mystery novels, here are the most recent ones from the year 2021, which are the best ones so far.

1. Before She Disappeared by Lisa Gardener

A New York Times Bestselling novel by the popular author of modern fiction and mystery, Lisa Gardener’s Before She Disappeared follows the story of Frankie Elkin, who is recovering from her alcoholic life but is unusual from others for the things she does that no one would. Frankie searches for missing people, who have been lost and forgotten by the world, she finds little pieces of the puzzle and never stops unless she has uncovered the truth.

When a new case arrives she goes to Mattapan, a Boston neighborhood to look for a young Haitian teenager Angelique Badeau, who has mysteriously gone missing a few months ago. The investigation to find Angelique takes on different turns, and the readers find themselves engaged in a plot where Frankie will not give up unless she has unveiled the truth and found the missing teenager.

2. The Distant Dead by Heather Young

Author of the best-selling novel Lost Girls, Heather Young brings another engaging, mysterious tale in the novel The Distant Dead is a twisted thriller that focuses on a murder mystery.

Sal Prentiss, a young boy, discovers a burned corpse in the lonely hills of the small Nevada town. On reporting it to authorities, the body is later discovered to be of Adam Merkel, the newcomer Maths teacher, who is mysteriously murdered and carried many secrets. As the plot unfolds, there are many problems, many issues going on, but most importantly, Sal wants to find the reason for the murder. Will he be able to discover this dangerous murderer? This novel is thoroughly captivating till the end.

3. The Hiding Place by Jenny Quintana

From the best-selling author of Missing Girls, Jenny Quintana brings another amazing mystery tale in her recent novel The Hiding Place that too impressed the readers. The novel revolves around the character of Mariana, who was abandoned as a baby and left to die. But when Mariana discovers the missing pieces of her past, the house where everything began, she comes across many mysterious things that are yet to be uncovered by her.

Mariana is desperate to find who her parents were, and why would they abandon her, but the abandoned house is holding many secrets. Tenants see Mariana come and look for traces, they silently spy her. But what are they all hiding from her? Is there anyone who is watching over Mariana secretly? There is so much to unveil and uncover from this “hiding place”.

4. The Wife Upstairs by Rachel Hawkins

The Wife Upstairs by Rachel Hawkins is a gothic mystery novel set in Alabama, that features the tale of Jane who is a young woman who recently arrived in Birmingham, and spends most of her time traveling among various foster and group homes. When she comes across Thornfield Residence, the lavish mansion, and his recently widowed owner Eddie Rochester, she sees potential in having a rich life ahead. But little does Jane know that Eddie is a mysterious man, his wife has died along with her friend in a mysterious drowning accident. With delicious suspense and twists, this novel will take readers into a thoroughly entertaining and engaging mystery.

5. The Maidens by Alex Michaelides

The New York Times Bestselling author of The Silent Patient   Alex Michaelides, returns with yet another dark and impressive tale in The Maiden that revolves around a murder at Cambridge University, and a mysterious Greek  Professor who is behind this heinous crime.

When Mariana Andros learns about the murder of her niece’s friend Zoe at Cambridge University, who was also a part of the secret female society of the college named “The Maidens”, she is certain that the Greek Professor Edward Fosca is behind it. Mariana a former student of the university and a brilliant but troubled group therapist knows the only person behind the murder is the Greek Professor, but the professor is charismatic, handsome, everyone’s favorite and is especially inclined towards the secret female group. Mariana must find all the proofs and go beyond her reach to unmask this killer, who is not the person he pretends to be. A plot that will capture the readers’ attention unless the outcome, The Maiden is undoubtedly a must-read for adult readers.

6. The Woman Outside My Door by Rachel Ryan

Rachel Ryan’s The Woman Outside My Door is the story of Georgina the housewife who lives in Dublin. Georgina has recently lost her mother, her marriage is at stake, and she begins to lose her mind when her 7 years old son Cody says that he has made a new friend at the park, whom he calls “New Granny”. A mysterious, psychological thriller that can send chills down your spine, Georgiana’s husband Bren tries to convince her saying that Cody’s friend is imaginary, but when Georgiana begins to find the traces of being this imaginary friend a real one, everything begins to change. Through several twists and turns, the novel takes readers into the disturbed psyche of a mother, and the horrific events that come along.

7. The Last Thing He Told Me by Laura Dave

A gripping mystery tale, The Last Thing He Told Me by Laura Dave follows the story of Hannah Hill, who takes readers to investigate secrets, lies, and intimate relationships. Told from a first-person point-of-view, Hannah takes readers to flashbacks of her past and the present, where she discovers her husband Owen had been lying all these years. Before Owen Michaels disappears, he smuggles a note to his beloved wife of one year “ Protect her”, despite her confusion and fear, Hannah Hall knows exactly to whom the note refersOwen’s sixteen-year-old daughter, Bailey.

There are many shocking events throughout the novel that are full of suspense and twists. Will Hannah be able to find Owen? Will she be able to save her stepdaughter? Or is there something fishier than it seems? The answers lie in the plot that you need to discover.

Shiver by Allie Reynolds is a novel that may seem much like the Twilight series, but of course, is a lot different and engaging. Grace is a teenager who was once attacked by wolves, and her werewolf love interest, Sam. When Grace recalls that barely surviving incident of the attack, she declares it as “pleasant and satisfying” because the yellow-eyed werewolf Sam tried to save her.

When Jack Culpeper, a mean high schooler is killed by wolves, Grace on her way back home one day hears a scream that sounded like Jack. Grace soon finds out three wolves in the forest, and one has eyes just like Jack did. This fictional plot is so engaging and mysterious, that it will keep you glued till the end.

9. The Survivors by Jane Harper

From the New York Times Bestselling author, Jane Harper’s The Survivors will take readers into a thrilling mystery full of secrets, that affect the characters of the novel deeply. The novel focuses on two murder mysteries and the character of Kieran Elliott who thinks he has made a terrible mistake that has led to devastating consequences at present.

Set on the Evelyn Bay, on the Tasmanian coast, Kieran has left his home for 12 long years, and when he returns home with his wife and daughter, to help his mother move house so she can be closer to his father, who has dementia and will be moving into a nursing home, he is delighted to meet everyone he knew during his childhood. But when a woman is mysteriously murdered and her body is found washed ashore, everyone in the town has secrets to hide. Even Kieran has secrets, he is haunted by his guilt for committing past mistakes and thinks he is the reason behind his brother’s death Finn. A layered and nuanced mystery that anyone would love reading.

10. Quiet in Her Bones by Nalini Singh

Regarded as one of the best books on the mystery so far of the year 2021, Nalini Singh’s Quiet in Her Bones follows the story of Aarav, whose mother has disappeared ten years ago along with million dollars of cash. When Nina is missing, everyone declares her as another trophy wife tired of her wealthy husband. But when the nearby forest, that surrounds the elite neighborhood becomes the ground of discovery of her bones, there is somebody in the neighborhood who knows what happened to Nina on one rainy night. When Aarav hears a chilling scream in the midst of the night from the neighborhood, he is desperate to uncover the secrets that this neighborhood is burying. Will he be able to do that? His investigation leads to many unexpected turns in the novel that are equally interesting and captivating.