Best Scholarships for Grandchildren of Veterans of Korean War 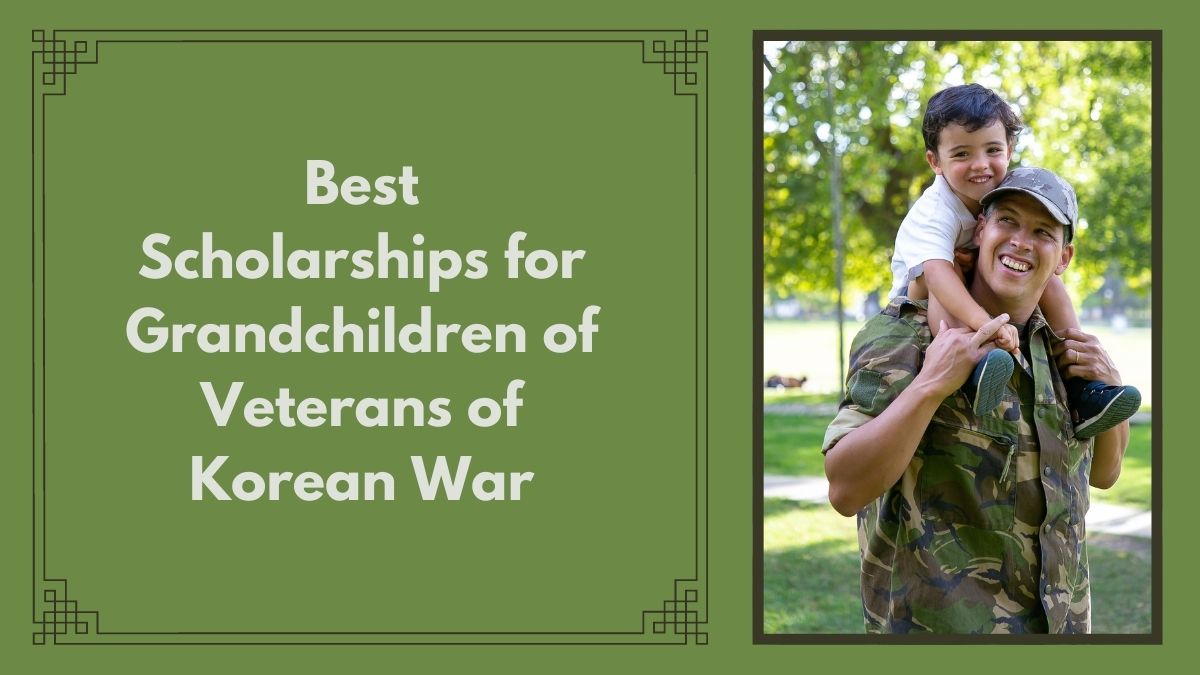 The Korean war began in 1950 and lasted till 1953 between the North and South nations. During this period, the American troops backed the South Korean army against the invading communist forces. It has been estimated that 6.8 million American men and women served the country during this volatile period in history. Records suggest that nearly 16 percent of the veteran population is made up of the Korean War. Out of which almost seven percent are known to be women veterans from the Korean War.

When we look at the financial aspects of these families, it has been recorded that the male Korean War veterans have an estimated family income of less than $ 30,000. Only thirty percent of them are inactive labor force as of now. The rest of the seventy percent have no employment and have retired or passed away. Most of them have formed charitable foundations to support the causes of the men and women who have served the nation with diligence and dedication. There are various non-profit organizations too that work for the advocacy of Korean War veterans. One of the active causes is to provide excellent educational opportunities to the next of kin.

There are various scholarships available to the grandchildren of Veterans of the Korean War. The below-listed scholarships are honorable and a piece of the legacy left behind by these distinguished military personnel. The scholarships are a result of the community’s collective efforts to give back to the heroes of the nation. They are sponsored, funded, privately organized for brilliance in education. These scholarships are being awarded to the direct descendant; their main criteria are to have the passion for following one’s dream of obtaining higher education.

KASF is a private non-profit organization that works for the development of Korean students living in the United States. This prestigious association works with cultivating pride in Korean heritage and culture. The scholarships are specially designed for the grandchildren of Korea War Veterans. The board of directors is voluntary, and many of them are actual donors to the scholarships.

Students are assessed based on their economic background, educational background, the letter of reference from their college faculty, the essay submitted with the application, and extracurricular activities. Students are evaluated on their community behavior as well. A further requirement is that the student must be enrolled in a full-time course in the US at application.

Samsung, the electronic giant, has commemorated the efforts of veterans who fought for the liberation of Korea by announcing the Samsung American Legion scholarship. Through the American Legion Foundation, it has successfully awarded scholarships totaling $6.5 million to more than 2,266 students since it was established in 1996.

Descendants of Korean War Veterans will get three bonus points while applying for the scholarship. In addition, students must be serving members of the American Legion Boys State or American Legion Auxiliary Girl’s State program. Students are also judged on their academic record, community service, and participation in school-related activities. The scholarship covers tuition, teaching materials, and dormitory fees.

3. The Graydon and Myrth Fox Scholarship

The Sacramento Region Community Foundation is based on service to the community and works specifically for the improvement of the education of children. The Graydon and Myrth Fox scholarship has been established to help an existing veteran who has served in the United States Armed Forces, the grandchild or spouse of a veteran who has been killed during active duty towards obtaining higher education.

The student is required to attend an active course at one of the accredited colleges in the United States. Their economic history will also be audited, as well as students are expected to write an essay describing their educational goals, career aspirations, and financial needs. They also have to submit a letter of recommendation from their college faculty.

The AMVETS National Service Foundation is one of the largest veterans service organizations to help veterans with their needs and sponsor various benefit programs. The AMVETS scholarship is endowed with meritorious students who have a brilliant academic record and come from economically difficult backgrounds. The eligibility for this grant is that the student applying must be the grandchild of a veteran who has served in the United States Armed Forces.

Must keep a grade point average of 2.0 and be registered in an active course at an accredited university. Students must also submit a paper outlining what higher education means to their bright future.

The Kalamazoo Community Foundation was founded in 1925 with the intention of rendering a service to mankind. Since then, the foundation has promoted various education programs to help students succeed. The Guy M. Wilson Scholarship is awarded to the children and grandchildren of military veterans. The key criterion here is that the child must plan to complete their studies at an accredited college in Michigan.

The student must maintain a grade point of 2.50 and be active in extracurricular activities.

The American Legion Auxiliary was founded by the veterans, wives, daughters, and grandchildren of the United States Military Force. The foundation is dedicated to supporting and championing social causes on behalf of veterans. A key objective is to provide better education facilities for veterans’ children and grandchildren.

The Children of Warrior’s National President’s scholarship are awarded to grandchildren of war veterans who wish to pursue higher education. This scholarship is awarded to fifteen or so students who excel in academia and contribute to the volunteer activities of the community. It is a renewable scholarship that provides course fees, tuition, subject material, and boarding.

The Tailhook Educational Foundation was set up to educate the nation about Navy carrier aviation and its role in building the nation’s security. Since then, the foundation has awarded a scholarship to fund the children and grandchildren of veterans, naval officers, and aviators who have distinguished themselves in their graduate studies.

The bursary is open to children who have taken an undergraduate course at an accredited US higher education institution.

The Women’s Army Corps Vet’s Association was created to promote the well-being of military officers who serve and have served in the American Armed Forces. This scholarship has been established to aid the educational ambitions of relatives of these women of valor. Students who are children and grandchildren of female veterans are eligible for the subsidy.

The student must excel in studies with a GPA score of 3.5 to 4.0 along with leadership qualities and be an all-rounder when it comes to community service. The documentation must include three letters of recommendation from the college faculty.

The Retired Enlisted Association was started with the intention of providing assistance to the families of veterans. The association has since then worked on donations, fundraisers, and volunteer financial aids, to facilitate the education of children and grandchildren of veterans. These bursaries aim to cover the costs of courses and the expenses related to a student’s subjects.

The student must have high academic grades with leadership qualities and excel in extra circular activities. The other criterion is that the student must be registered at an accredited college in the United States when applying for scholarships.

Each year the Military Order of Purple Heart awards deserving students from the military background the chance to attain academic goals with financial assistance. This grant is available for the direct descendants of veterans and military personnel. The main criteria are that the student’s parent or grandparent must be a member of the MOPH. While applying, the student has to produce documentation that their parent/grandparent has died while performing active duty.

Students are expected to maintain an active overall GPA of 4.0 and excellent academic standing. Once the grant has been awarded, it can be used for course fees, tuition, incidental fees, boarding, and any other direct cost associated with the college course.

Veterans’ scholarships promote patriotism and a sense of duty in their descendants. The above scholarships instill pride in students attending courses at the colleges and universities of their choice. It is a legacy that their grandparents have left behind for them to follow. A bright educational future is the civic right of every scholar; by presenting them with vocational grants, they can daydream of possessing a promising future in the Armed Forces or the career of their pick.