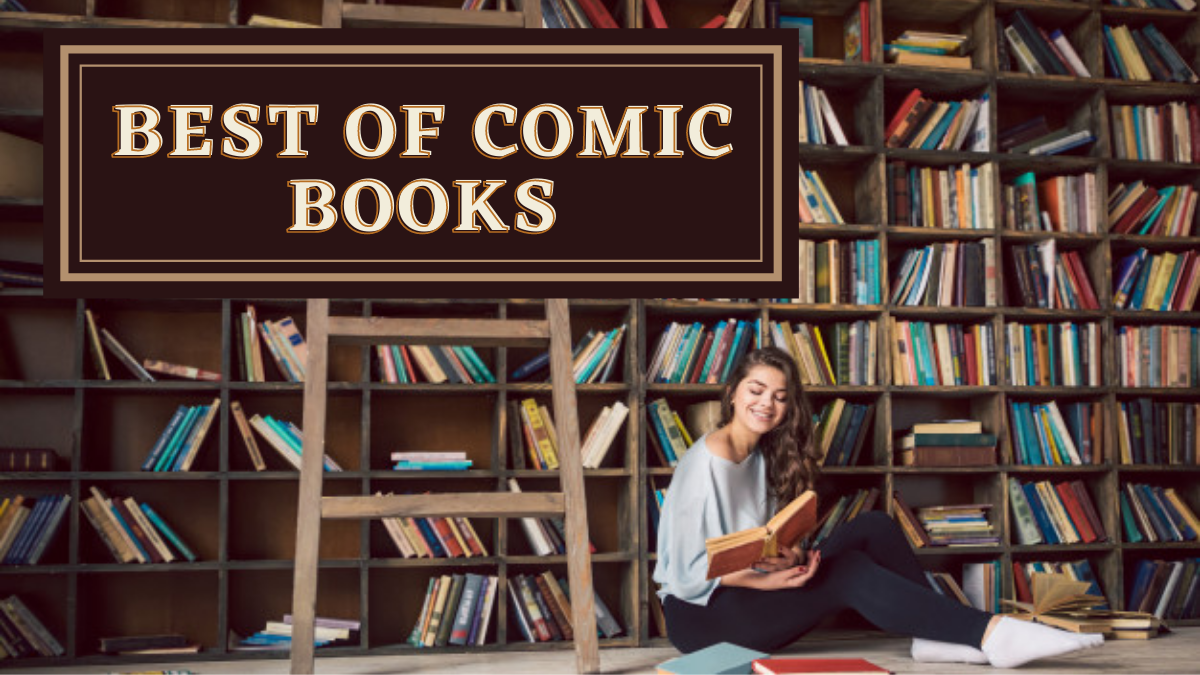 A comic book is a collection of sequentially juxtaposed panels that depict distinct scenarios in the manner of comics art. Panels are frequently accompanied with descriptive text and written narration, with dialogue typically included in word balloons, which is a hallmark of the comics art style. The mere enjoyment of sequential art narrative can be worthwhile on its own. Comics, on the other hand, may educate, convince, and urge readers to try new things.

The visual style of comic books and graphic novels can assist a wide range of people, particularly young readers who are struggling to improve their reading abilities. Comic books may be far more interesting than other literary media, such as novels or short tales, due to their vivid graphics and concentration on story and characters. Comic books also aid in the development of the reading abilities necessary to grasp texts of greater complexity. People who read comic books learn to interpret information in a new way.

There are several excellent graphic novels and graphic nonfiction books available. Many of these stories, like your favorite literature, deal with serious issues and emotions. Because graphic novels are visual, you may experience these topics in different ways than you do while reading a regular book. Don’t restrict yourself to traditional text; immerse yourself in the realm of comic books and graphic novels. You’re not going to enjoy everything you come across, but you’re not going to like all the books either. All you have to do now is look around and see what works best for you!

The truly remarkable thing about the Chip Zdarsky period of Daredevil is that it is always arguing that it is the finest Marvel Comic in the entire house of ideas, especially when coupled with series regular Marco Checcetto. The progression from issue one to twenty-five, with the incredible “One More Day” annual thrown in for good measure, is a masterclass in escalating stakes, thematic growth, and character development. Daredevil #2021 begins with King in Black tie-ins, which might spell the end of the series, but Zdarsky and crew don’t skip a beat, effortlessly incorporating the Venom-based craziness of the main event into their story of Daredevil, Kingpin, Elektra, and Hell’s Kitchen.

2. The Love and Rockets Companion by Marc Sobe

Foldout family trees for both Gilbert’s Palomar and Jaime’s Locas storylines, as well as unpublished art, a character glossary, highlights from the original series’ anarchic letters columns, timelines, and the most comprehensive Hernandez Brothers bibliography ever compiled, including album and DVD covers, posters, and more, are all included in this book. It’s a must-have for comics collectors, researchers, libraries, and old and new fans alike, thanks to the attention to detail and great production values: for those new to the series, it’ll make joining in feel less intimidating. Given the enormous quantity of information and complex storytelling methods like flashbacks, flash-forwards, elliptical narration, and magical realism, it clears up uncertainty that even people committed to the trailblazing alternative comic during its 30-year existence might encounter.

3. The Complete Maus by Art Spiegelman

Despite the fact that the vocabulary to celebrate such production didn’t exist at the time, Spiegelman’s anthropomorphic narrative of wartime horrors won a special Pulitzer in 1992. It’s the greatest comic of a year that included Alan Moore’s Watchmen and Frank Miller’s The Dark Knight Returns, which says a lot. The film Maus depicts the narrative of Vladek Spiegelman, a Jewish survivor of Hitler’s Europe, and his son, a cartoonist grappling with his father’s past. Maus uses the tiny to approach the indescribable. Its format, a cartoon (the Nazis are cats, the Jews are mice), shocks us out of any sense of familiarity and successfully draws us closer to the Holocaust’s grim core. Maus is a chilling tale within a tale. The author weaves Vladek’s horrific narrative of survival with his account of his tumultuous relationship with his elderly father. They stage a regular existence of little disagreements and uncomfortable visits against the backdrop of guilt brought on by survival. This incredible recounting of our century’s most horrific news is a narrative of survival, not only for Vladek but also for the children who survive, even the survivors. Maus investigates history’s gory pawprints and the implications for all of us.

This historical graphic novel by David F. Walker and Marcus Kwame Anderson is a must-read for anybody interested in learning more about America’s Black Panther Party. The Panthers’ history is complicated, and Walker and Anderson do an excellent job of portraying the whole picture while emphasizing the underappreciated social good, the unmistakably complicit role of law enforcement, and the highly contemporary issues the party was formed on. The revolutionary Black Panther Party is depicted in this colorful and intriguing graphic novel. This riveting cartoon examines the Panthers’ influence and relevance, from their social, educational, and healthcare initiatives to their fight against police brutality through citizen patrols and many battles with the FBI, which has targeted the Party from its inception. The Black Panther Party depicts the important events, personalities, and activities of the party, as well as its cultural and political effect and ongoing legacy, via dramatic comic-book-style retellings and graphic profiles of key characters.

The Puma Blues is a near-future society kissed by terrorist attacks and the prospect of ecological catastrophe, written by Stephen Murphy, the most prolific Teenage Mutant Ninja Turtles novelist of all time, and illustrated by Michael Zulli, artist on many of the most successful Sandman comics. Zulli’s animal painting is very stunning. If you’re looking for a book with truly exceptional artwork that defies the norms of illustrated books, go no further. This comic becomes the intelligent and urgent mythology for the millennium’s conclusion, with superb graphics and eye-popping images.

The relaunch of a new S.W.O.R.D. comic book series, headed by Al Ewing and Valerio Schiti, is one of the most prominent things to come out of the recently ended X-Men crossover event X of Swords. The mutants of Krakoa team up with a spacefaring organization devoted to safeguarding the Earth from cosmic dangers in the new series. The first issue of S.W.O.R.D. demonstrates there’s plenty of room for Dawn of X to develop and explore as it expands the Children of the Atom’s reach into the cosmic side of the Marvel Universe in an outstanding start, with a lively S.W.O.R.D. relaunches after the crossover event X of Swords, as the Children of the Atom, spread their quest throughout the galaxy., dynamic core cast and eye-catching, mind-bending artwork from cover-to-cover.

After the Rain is an outstanding graphic book that kicks off the very promising Megascope series of comics edited by John Jennings. It is an adaptation of a NnediOkorafor short tale. Jennings and artist David Brame transform Okorafor’safro speculative fiction into a creeping, encroaching, Swamp Thing-Esque horror narrative about a young woman’s passage from America to her African roots as scripter and colorist. The graphics and panel layouts by Brame and Jenning are mind-boggling but natural, and alone are worth the price of admission. The graphic book collaboration between John Jennings and David Brame employs strong graphics and colors to forcefully portray this story of identity and fate.

Juni Ba’s TKO Studios graphic novel is a work of art that straddles the line between West African mythology, Samurai Jack, and Hellboy. Few works successfully combine Ba’s Senegalese roots with this much exhilarating action, adventure, and anthropomorphic warthogs and foxes in desperate need of retribution. The bright splashes and hand-written sound effects evoke Daniel Warren Johnson’s excitement, yet Ba shows to be a very intelligent storyteller, full of heart and nuance, in his most significant writing to date. This fascinating graphic novel recounts the adventures of Mansour Keita, the last prince of a fading kingdom, and his devoted Djeli, or ‘royal storyteller,’ as they go to see the great magician who wrecked their civilization and then retired into his tower, never to be seen again.

Canadian cartoonist Seth writes and draws about hunting for the work of a mysterious cartoonist from the 1940s named Kalo who may have once gotten it into The New Yorker, and it’s a master class in low-key pace. Everyone believed this outstanding work was a memoir because of the live-or-Memorex nature of the tale and the surge of autobiographical comics that flooded the market in the early 1990s. Seth later confessed that it was a work of fiction. Seth pays respect to the magazine cartoon’s wit and elegance. Seth seeks shelter from the crassness of current culture in a quest to learn more about Kalo, but his passion blinds him to his increasingly distanced girlfriend and his family’s quiet despair. This softly wry modern quest tale about desire, anxiety and the lessons of nostalgia is written in a charming old-fashioned manner.

10. The Many Deaths of Laila Starr

Ram V, the creator of “Justice League Dark” and Filipe Andrade, the creator of “Captain Marvel” presents a stunning new series for fans of The Wicked + The Divine and The Dreaming that examines the narrow border between life and death in Mumbai through the perspective of magical realism. Ram V is one of comics’ most fascinating creators, and this Boom Studios collaboration with Filipe Andrade has all the makings of a potential classic right from the start. Fans of Neil Gaiman’s Sandman and American Gods would be particularly intrigued, but there’s a lot more going on here than a creative team experimenting with mythology.