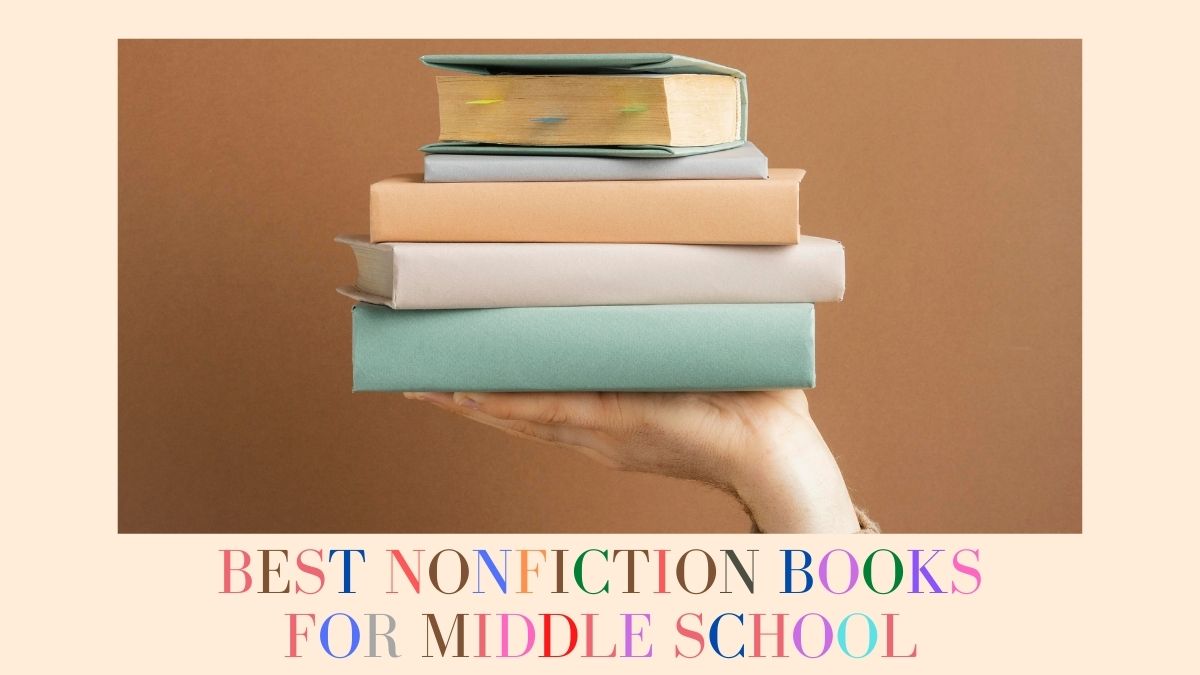 The impressionable age is when a child reaches middle school, it is the time for letting the rebel within shine. To harness this curiosity and creativity, it is necessary for parents and teachers to introduce young minds to productive reading. Rather than wasting countless hours watching T.V. or engaging in mindless video games, it is imperative that children have inspirational real-life heroes as role models.

There are various fiction and fantasy stories that leap from pages with gripping adventures. But the non-fiction section is interesting in itself, the various stories about historic innovations, timeless figures who conquered the world, scientific revolutions that changed the functions of modern society, and true stories that captivate with tales of valor.

The below-mentioned books have been curated to satisfy the knowledge thirst of young brains. They come packed with computer language expertise, language diversity, a history that cannot be forgotten, and sensible tales that will blow one’s mind. Documented in the true style of the human spirit, these books will inspire many children to embark on exciting careers later in life. After all, books are the true companions when it comes to learning incredible information instantly.

1. Stamped (For Kids) : Racism, Antiracism and You by Sonja Cherry-Paul, Jayson Reynold and Ibram X. Kendi

The kid’s edition has been written by Sonja Cherry-Paul; young, curious minds can learn the history of racism. It has been adapted by a coarser version of this book narrated by Jayson Reynold. This is a revelation with chapters on how racist ideas spread throughout the world. How does this affect cultural and social ties in today’s world? And how are change activists taking measures to stem the horrors of racism? On top of this, children will learn to identify and eliminate racist behaviors in their environment.

The book is not a serious dialogue, but it is sprinkled with wise humor and precise information about the evils of racism. Sometimes it is difficult to broach sensitive topics like racism for kids; books like these are a great way to become conscious citizens.

2. To Fly Among the Stars : The Hidden Story of the Fight for Women Astronauts byRebecca Siegel

Rebecca Siegel shares the courageous story of 13 astronauts who secretly trained to challenge sexism and land on the moon. During the 1960s, when the world was celebrating the first landing on the moon and men astronauts were lauded for their incredible feat, nobody knew that a group of women too had trained for the same. Test pilots, flight instructors, aviation experts, and incredible innovators joined hands to train themselves in the main dominated space sector. The book tells an incredible story about how women astronauts fought discrimination at work, limited funding, and limited resources in hopes of success.

A marvelous gift for young girls who dream of flying through space and creating history. A brilliantly documented book on space historical dynamics.

3. All Thirteen: The Incredible Cave Rescue of the Thai Boys Soccer Team by Christina Soontornvat

Christina Soontornvat writes about the most documented life-saving mission of 2018. On a sunny day on June 23, 2018, twelve boys from the Wild Boars football team entered a network of dense caves for an adventure accompanied by their coach. What appeared to be an interesting expedition turned out to be a horrible experience when they were trapped in the caves due to the sudden rise in water level. What followed was a worldwide mission to rescue these children from the dark caves; the heart-wrenching mission took about seventeen days. Each passing day made it difficult for the rescue crew to navigate through the crevices and narrow network of the caves, but in the end, all of the boys were rescued successfully.

The author has documented and well researched the whole journey, presented in an excellent true account narrative. The book also contains on-site images, detailed scientific notes on caves, scuba diving, and the horrific conditions inside the natural caves. It includes illustrations of the surrounding area, charts, maps, first-hand testimony from survivors, religious implications, immigration issues, and the rescue team. Which makes it an interesting read on a real salvage mission.

Marilee Peters has combined the history of the deadly epidemics that have shaken over the centuries with the pioneers who have found the cure for these horrific outbreaks. Almost like a thrilling novel, the author has documented the scientists who treated the first patient and then what followed towards the race to produce the perfect vaccine. The book also answers diseases like yellow fever, Ebola, typhoid, Spanish flu, and AIDS spread. How did they end up being national emergencies? How has epidemiology handled these pandemics?

Each well-documented chapter begins with the real story of the first person who contracted the disease and then identified the symptoms that led to his or her treatment. The book also comes with interesting illustrations concerning the epoch of these illnesses. An interesting read when it comes to parallels with today’s global situation – the COVID-19 pandemic. Kids might get inspired to become epidemiologists and find modern-day cures for ailments.

5. The Poison Eaters: Fighting Danger and Fraud in Our Food and Drugs by Gail Jarrow

Gail Jarrow, a famous children’s author, has written this excellent book on identifying harmful chemicals in our daily foods. It cautions against malpractice by unregulated food companies that produce toxic products. The book also provides information on how pharmaceutical companies and the beverage industry have incentivized people to buy harmful consumables and medicines. This book has been widely acknowledged in literary circles as the pioneer in denouncing wrongdoing in food safety standards and regulations. The author presented her arguments with well-researched newspaper clippings, magazine proofs, photographs, gory details of food denigration, and personal anecdotes.

The author explains how the food industry has pumped radium, paraffin, grounded marble, etc., and how medicines contain opium, cocaine, and morphine which later on become like addictive drugs. She finally advises on growing your own organic food and eating healthy in order to keep the immune system naturally re-charged.

6. Coding for Kids: Python: Learn to Code with Fifty Awesome Games and Activites by Adrienne Tacke

Adrienne Tacke, a software engineer herself, has presented the joy of learning computer coding with a fun activity book. This book comes with fifty innovative coding exercises that can teach young minds to develop computer language proficiency with astonishing pre-written modules. It is also packaged with simple instructions for newbies and improves coding knowledge with basic sample code interpretations. The book also contains colorful illustrations and computer programming references to facilitate learning.

Python is a unique and easy coding language that children can quickly acquire to educate themselves on the dynamics of future technology. Keeping the minds engaged with modern, innovative lessons is the key to overall learning development.

7. The Boy Who Harnessed the Wind byWilliam Kamkwamba and Bryan Mealer

William Kamkwamba and Bryan Mealer bring a truly inspirational story about necessity being the mother of every invention. The story goes that William survived a terrible drought that almost annihilated all the food on his land. The young man then turned to science and built a windmill, the first in his village with scrap metal, and for the first time, his house had electricity. He has learned to harness wind power to pump water to fertilize the land and grow crops. Thus ending the spell of the famine in his region. This book has since then received numerous accolades and has also been turned into an original Netflix film.

It will inspire teenagers to get cues from young innovators and explore the possibilities of a promising future through scientific discoveries.

8. Bomb : The Race to Build and Steal the World’s Most Dangerous Weapon by Steve Sheinkin

Steve Sheinkin brings the most disturbing, fact-based historical book about the birth of the Atom bomb. When in the year 1938, a German chemist observed the fascinating split of a Uranium atom under controlled circumstances in a laboratory, it launched several ploys by the international community to sabotage the creation of the atomic bomb. Many nations plunged into the spy circuit to obtain exclusive scientific details of this latest military-grade discovery. The United States, the United Kingdom, and the Soviet Union have embarked on a lethal race for nuclear status.

Like a spy thriller, the author has woven in facts about the harmful effects of a nuclear bomb, the use of these modern destruction weapons, and the events that shaped history. An excellent guidebook to educate kids around the outcomes of the greed for power by A-bomb nations.

9. Never Caught: The Story of Ona Judge : George and Martha Washighton’s Courageous Salve Who Dared to Run Away by Erica Armstrong Dunbar

Erica Armstrong Dunbar tells the powerful story of a slave, Ona Judge, who dared to escape the clutches of one of America’s founders, George Washington. Although America was built on the symbolism of unity, the dark history of slavery was written down most of the time. Ona Judge grew up in slave quarters and became one of Washington’s most sought-after slaves. When it was decided that it would be given to the next generation of Washington, the girl made an audacious attempt to escape.

Enthralling narrative, captivating views of history, and the secret world of slavery during the reign of the first family of America has been put forth bravely. The author has dealt with delicate issues of liberty with ease. How could George Washington preach liberty when he was immersed in a culture of slavery? Why did Ona Judge escape, and how did she succeed? Why hasn’t this story of slavery ever come to light? Difficult questions that young minds may elicit from this book.

10. Witches: The Absolutely True Tale of Disaster in Salem by Rosalyn Schanzer

Rosalyn Schanzer, an award-winning author of several illustrations and children’s books, has broached the topic of the most mysterious event in history – The Salem Witch Hunt. The trials of witches have passed through numerous theories, legends, and folklore for centuries. The author has supported this information in simple and well-adapted texts for young minds to comprehend this tragic event of the past. She also gave impressive illustrations to further certain points of history. It is a true account of what happened in Salem, Massachusetts when the Puritan girls could not be healed of their strange disease, and they were later called witches.

Much to the supernatural elements, the book is a historical narrative with accurate information. It debunks the myths and the fake stories that have been floating around about the women who faced barbaric trials.

Young minds absorb information at a rapid pace; they must be presented with dynamic readings of history, geography, science, and literature to clearly understand the world. The above readings are diverse in subject matter and chosen with the education aspect in mind. Parents can donate these extraordinary books to curious teens for well-informed reading.