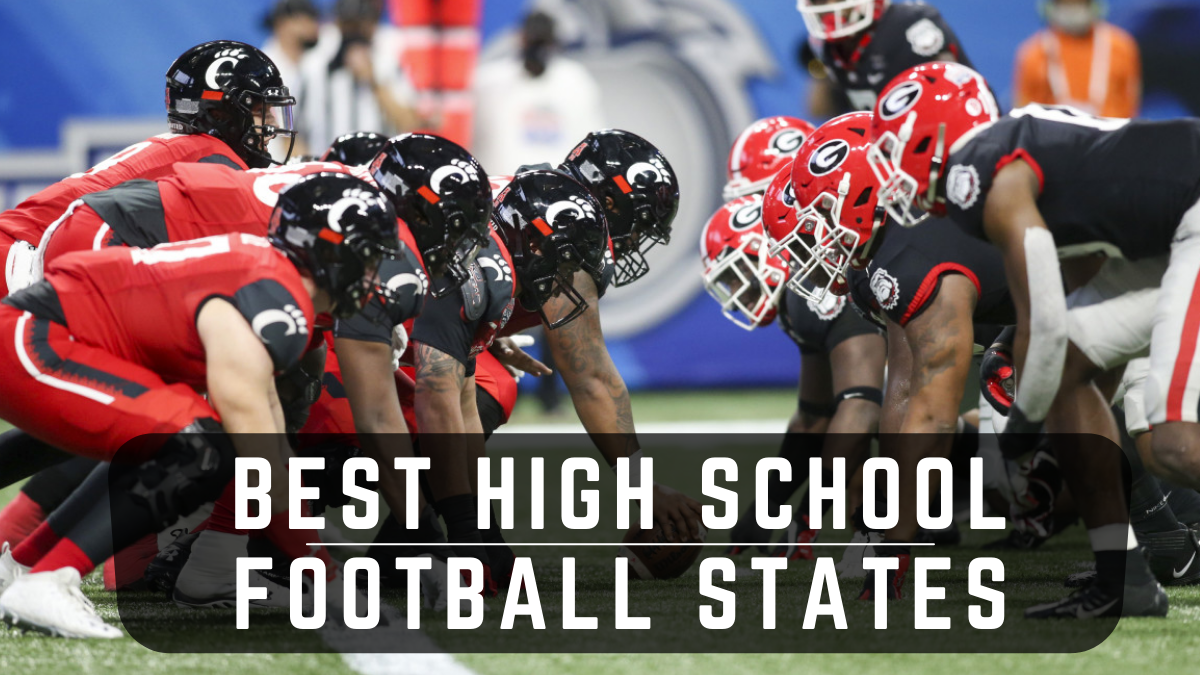 When it comes to high school football, we cannot forget how Florida, Georgia, and Louisiana rock the football industry. Of course, football players across the country are primarily alumni from these states. But there are a lot of stats in addition which has kickass facilities for football. Tales of gridiron greatness are meant to be told on an epic scale. And it starts in local communities with high school football. So it is necessary to join the best high school where they give excellent football coaching.

In this article, I have enlisted the top 10 states in America with the best football high school coaching. All these states are chosen after in-depth research using  HS Football America’s algorithm that pulls together statistics based on their regional and national team rankings.

So if you plan to pursue a great career in football, you have come to the right place. These states mentioned below are great places to move in and concentrate on football. So without further adieu, let us get into it!

One of the most extraordinary states which have first-class football infrastructure in California. De La Salle High School is the number one high school globally with a great football team. In addition, de La Salle owns the longest high school football winning streak in national history — 151 games from 1992 to 2005.

If you plan to do your education in California, you can have excellent access to football in almost every high school. Not only in state championships but also in national championships, California is doing great. Even “When the Game Stands Tall” starring Jim Caviezel, is based on the high school.

When it comes to athletics and sports, Texas is the number one state with phenomenal championship records. The public Southlake Carroll High School is an excellent school with fantastic papers. However, it is not only schools that are good with sports, but also Colleges and Universities.

Southlake Carroll High plays home games in 11,000-seat Dragon Stadium and won three consecutive national titles in the 2000s. The stadium is one of the most incredible places to watch football as the school gets excellent support from the fellow people in Southlake.

Coach Roger Harriott is a phenomenal coach who has won two state championships for the high school team. St. Thomas Aquinas High’s talent and tradition gave them the edge in perhaps the most challenging state on this list to pick. This school is highly recommended.

They have a fantastic winning streak and excellent infrastructure. Kenny Sanchez is the present coach of the high school, which has been doing great ever since he took over the throne. Fun Fact, For the 2019 season, 32 former Bishop Gorman players were on FBS rosters.

If you plan to do your schooling in Ohio, hands down, Saint Ignatius High School is a fantastic choice for football. It is a private high school located in Cleveland. The highlight of this school is there is significant participation of girls in athletics and football too.

Right from 1983, Chuck Kyle has been a phenomenal coach for the Saint Ignatius high school. They have a total 11 of state titles, which is still 13 behind Ohio leader Massillon High. It also has an excellent reputation for coming to the playoffs every season.

Valdosta High School is a phenomenal school that has excelled in not only football but also national championship baseball tournaments. The school also has a great record of academics. So if you plan to study in Georgia, Football will become a cup of tea.

The school was doing great back in the 90s when Nick Hyder was the coach of the high school team. Nevertheless, there are many high schools with really good football infrastructure. In fact, Valdosta famously won ESPN’s “Titletown USA” contest in 2008 as the city in the U.S. that had the best relationship with its title-winning team.

Right from the late 90s, Oklahoma has been ruling the football industry. The important reason why Oklahoma has a great track record in not only football but also other sports activities is because of the state funding the schools get. The government gives a lot of funding to the schools.

Moreover, Jenks High School is also funded by wealthy people in the neighborhood. Therefore, the school focuses on giving excellent training and support for students who want to pursue football. The school’s reputation is because Former head coach Allan Trimble is considered the greatest high school football coach in state history.

The number one reason why Maryland falls under the top 10 category is society’s love and support for the students who play football. Parents constantly give vital support to their kids who want to pursue football at their high school.

If you had to choose one school, I would highly recommend the top-rated high school in Hyattsville- DeMatha Catholic High School. The school has a phenomenal track record with 24 WCAC Championships. In fact, the state’s Offensive and Defensive Player of the Year lists is littered with DeMatha standouts.

Historically speaking, Alabama has been doing great when it comes to football right from the 1980s. One of the most endorsed schools with top-rated high school team’s coach excellent In fact critical an excellent sports football and infrastructure is Hoover High School. The school balances out a fantastic gender distribution in sports and athletics. Girls have high participation in sports.

Hoover High School has 13 state championships making it the best high school in Alabama with a phenomenal football team. Josh Niblett is the present coach of the football team and he has been doing a great job. The team has won six state titles under current coach Josh Niblett.

Located in Honolulu, St. Louis School has been in the limelight as they had a fantastic offseason. The most dominant program in Hawaii high school football history, St. Louis School, already has a Heisman Trophy winner with University of Oregon quarterback Marcus Mariota. A lot of students who study in this school get drafted into one of the top universities.