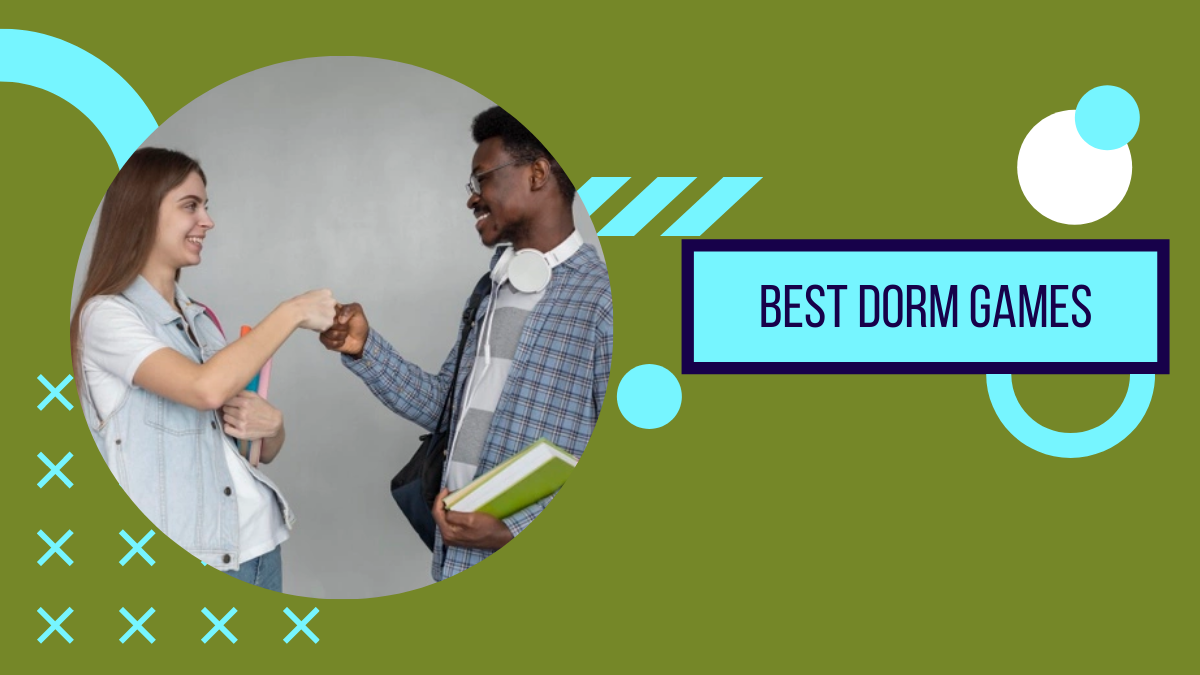 Dorm life is diverse and filled with so many memories; it is also the potpourri of cultures. There are students from all over the world who crowd into tiny rooms for a long time. This can get a bit tricky with each one having their own style of living and studying. So how does a new student in the dorm break the ice? How does one strike new alliances? How does one discover something interesting about his/her roommate? It is through fun dorm games! These games can become the point of discussion, and regularly hang out sessions with the gang. It would also mean to include new members who have recently joined the campus. Thus creating a positive vibe and building new connections that manifest harmony among the dorm occupants. So while students organize spooky movie nights, cook or bake sessions, clothing swap parties, cosplay events, and hang out in the residence lobby, they can choose from the games that have been mentioned here and forge lifelong friendships.

These below-listed exciting games will not only bring out the shy ones from their cozy corners but also let the extroverts enjoy the company of scholars. Opposites always attract, and these games allow the players to form teams with their choicest allies. Some of these card games are meant to bring out the dirty secrets about friends, some create an air of mystery and need to be solved with a sharp mind, and then there are party games that will create a hilarious environment during sleepover nights. Students will enjoy the variety that has been curated with this amazing list of dorm games. These games also make for an excellent choice for gifting it to a loved one who is shifting into dorm life. So just dive in and select the one game that suits the mood of the day, and then watch the whole dorm come alive!

1. What Do You Meme? Core Game – The Hilarious Adult Party Game for Meme Lovers

Can you call it the deal-breaker or the ice breaker? Believe it or not, this game can turn on the heat and possibly even let one make friends for a lifetime. Do you love memes? Of course, that is not even a question for any college-going kid. Memes are an expression of strong bonds between groups and individuals. Memes can be set according to one’s mood, expression, favorite items, and habits. It is also a popular medium for expressing feelings through different situations. This adult game allows one to create funny memes through caption cards with photos. There are 365 captions available, along with 75 photo cards; players will get points on pairing the craziest thoughts with photos. Final outcome – the loser can buy snacks for the winning participants.

Turn game nights in the dorm interesting with a barrage of code names for friends and opponents. With this amazing card game, one can create a team of secret agents and then guess their names before the opposing team does. This can become an intriguing chase scenario with a suspense plot for each of the team members. Imagine being caught by your own team member? The hilarity will be caused by ready-to-use codenames that can be kept for every player. So let the guessing game begin, and who doesn’t like codenames in the dorm!

This strategy game was named the Toy of the Year by People’s choice in the year 2019 and has sold over a million boxes. An excellent game to hone leadership skills and promote team spirit. It will also bring out alliances and forge new friendships within the dormitory; the game requires the players to create their own unicorn army. The player who constructs his/her own army of faithful disciples will win the game. So it is all about quick thinking, communication, and testing the loyalty of friends as well as knowing one’s enemies. The main goal is to acquire seven unicorn cards from the game; hence the player will have to destroy trust as well as create new connections for the other players to sacrifice their own positions.

This is the best party game; it is the adult version of the truth and dares with a twist. An excellent way to earn friends is in the dormitory at a slumber party. The game is packed with hilarious cards that have eccentric situations mentioned on the back; the players have to choose a judge for this game. The goal of the game is to pick a card and then convince that judge that this particular scenario which is mentioned on the card, is absurd and win over their decision to give brownie points. For example – the card says – If you had to wear full scuba gear and go to college, imagine how weird that would look? Or if you had to sleep in a bucket which is not even possible. An exciting game to entertain old friends and win new ones.

What is a college life without booze parties? And it is not the drinks that create commotion, but the things that happen after passing out stone drunk! So what stupid things did we do to get embarrassed later on after drinking? Texted an ex-lover, called out a friend, got into the wrong cab, or perhaps slept on the pavement with a half-eaten burrito? It could be worse and hilarious with all the scenarios playing in the head. This deck of cards comes with 250 quick cards that scream amusement. Play with dorm friends while partying and watch all the best-kept party secrets falling out.

How well do we know our friends or even our roommates? And do they know you well? Then what are you waiting for? This exciting card game comes with four categories that can be picked to know each of the teammates; the players need to create two teams and then pick one card each from the categories to ask silly or self-discovery questions. The cards come with what-if scenarios, all about me cases, everyday situations, and adult versions of questions with dark twists. An exciting game to break the ice when it comes to introducing oneself or getting to know others better. It also reveals the various perceptions and inhibitions of the players regarding one and another.

Well, if you want to hone your debating skills with your friends, then this game is the best to remove stage fright. The off-topic comes with situation cards that are based on various topics; the player needs to pick a card and debate about the given topic for two minutes. The winner will be decided on how well he/she is able to convince the others about their knowledge regarding the given discussion point. This could mean fun for a slumber party; players can also create their own topics or themes for discussion—an excellent way to improve public speaking skills or perform an entertaining stand-up comedy.

Think you are a genius? Do you love playing quizzes and solving puzzles? Well, the 5-second rule game is here to entertain the wits out of people. College students can give a toss to their brain skills by playing this game on a full house with friends. Create two teams and make each player from the team picks a card. These cards are actually trivia questions, and the other team needs to guess the right answer within 5 seconds. The team that answers correctly gets more points; hence the one that loses can pay the penalty by giving a dorm party. The game comes with 150 fun cards and quirky questions, so put on mind hats and win.

9. TAG Eliminate Your Target Until You’re The Last One Standing

This game will bring out the detective and the assassin within, an immersive, addictive game that allows the players to tag one another and then eliminate each other till only one player wins. A live-action game that comes with quick clues and colored cards that work like moving targets for the players to guess each other’s positions to be able to eliminate the other. No one can be trusted, and hence the game will be quick-paced for the players; this isn’t a cozy board game that involves sitting around the table. Rather, it makes an interesting setting to explore the dorm and make new alliances within the game.

What else comes to mind when one thinks about dorm rooms and friends? Obviously, it is food! There are chefs who can whip up the grandest meal, even in a dingy dorm room, and other who are lazy eaters that wait for someone to cook. Whatever the foodie scenario, this game will bring out the best within the players. It will also reveal each players’ food favorites and dislikes thus;, they can get to bond over food and hilarious conversations. The tag must be hung on the fridge, and each player needs to answer the ‘question of the day about food whenever the player passes by the fridge. Make the questions interesting and watch with fun all the wacky answers. For example – Who burps the most? Who loves to steal the cheese? Just do not use stale lines!

College days are the best, and to make these even more memorable, the above games just add to the fun. Dorm life can become a tad boring with hectic schedules and assignment deadlines. Keep the friendships growing with these party games, and allow positive connections to grow.