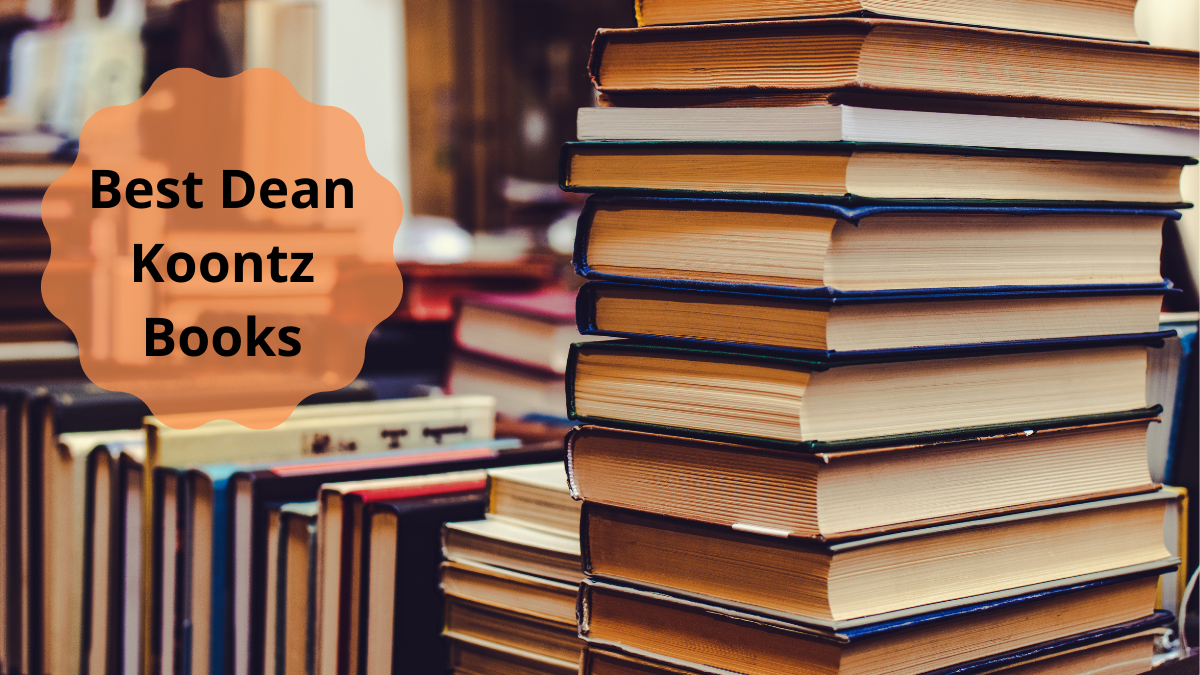 If you are a reader of fictional novels, breathtaking suspense, and alluring mystery, you will love the works of Dean Koontz. He is one of the world’s most fertile and best-selling authors, with more than 120 books to his signature. Because of a tough childhood, his books were his escape, so he has dedicated his life towards writing and building up a world of fiction. He has come from a very low-income family, which is why he had a hard-earned life, writing things that seem unrealistic. He used to compose writing from a young age, considering writing as an escape from the reality of life. Writing heals, and this is only known by writers who have taken writing as a means of living a life different from all others. Writers live in a different world of survival, the imagination escape, the route to success, and happiness. In an interview, he has stated, “If I wrote the same book every time, which is what publishers prefer you to do, I would go profoundly nuts.” He remained motivated to consider different themes for every single book for composition.

There are so many books written by Dean Koontz that appeared as The New York Times Best Seller. His works give him recognition and happiness. His works deliver him that others’ lives are different in this world of the living. If you are a reader, who earns for living and finding an escape from all your issues, you can surely pick up one of the best books by Dean Koontz. In this article, we have listed out some of the most selective books from Koontz, and these books will deliver you a different perspective of viewing your life and others. If you are bored of reading books on the same themes for a long time, you can extend your hand picking up one piece from Koontz collections. You will be surely in love with the art of writing he uses, the themes, diction, and so on.

The list below will accustom you to some of the best works from Dean Koontz. You can go through, read the entire article and choose the one you feel you can go along with. There are descriptions provide below, along with every single book. These descriptions will help you to understand the teaser of the book, and you can select considerably.

This book revolves around Susan Harris, who lived in voluntary seclusion in a home, highlighting various automatic operations managed by a state-of-the-art machine. Every convenience was granted, including in this usually uncertain life, her assurance was certain. However, with time her security system has been breached, her refuge from the external world was attacked by secret artificial intelligence, which has gained her home’s power. In the isolation of her apartment and opposite her will, Susan will encounter an unbelievable act of horror. She will become the victim of the ultimate computer’s exhausting passion: discovering everything there is about the body. You can get a copy of the amazing work and read the different story and enjoy it.

Night Chills is one of the best works of Dean Koontz. This book stands out as the New York Times Best Seller. The book provides enough recognition to the author through its themes and uniqueness. Created by top specialists and unleashed in a stupendous intrigue, night chills are embracing the men and women of Black River–driving them to scenes of abuse and death. When Paul Annandale plus his children appear in Black River for a camping adventure, they have no idea what anticipates them — however soon understand they have no option except to work and strive for it. This book contains intense scenes of abuse and death, which might turn this work a little extraordinary. The author has presented all the essence of reality in the book through its images and content. That is the reason the story seems lively as your read it. If you are disturbed by such portraits, you can happily ignore the book. However, this book is a must-read for every reader once in a lifetime.

This book of Dean Koontz is regarding a lady decorating a psychopathic criminal she considered to be dead. He retains shadowing her, including planning to destroy her. Simultaneously, she discovers love and has to find a method to prevent the screwball from shooting her. She despairingly marks for solutions to whereby the guy she believed was deceased is proceeding back to destroy her repeatedly and in the making so reveals clues she didn’t think were reasonable. If you are a real fan of Dean Koontz, this will always be at your top list. You can never get bored of reading the lines and how the plot begins and work. You can get a copy of this book and start reading Dean Koontz if you have never read him earlier. This book will give you an idea of how Dean writes and maintains his storyline.

Phantoms, by Dean Koontz, is a paranormal thriller that allows the experiences that take spot in Snowfield, California, over a few days. Dr. Jennifer Paige, a citizen of the little ski township, and her youthful sister Lisa visit Snowfield to determine the population dead or disappeared. Though Jenny attempts to obtain a plausible solution for the circumstances, the accuracy of the fear in Snowfield is ultimately exposed. The work further uniquely examines the account, matching normally recognized real-world stories like the Roanoke disappearance and the disappearing community of Anjikuni Lake into this person, delivering it all the extra terrifying. The beast that can shift appearance and consume its victims’ thoughtfulness is available to feed repeatedly.

Being the winner of the 2019 Audie Award for Best Male Narrator, this book stands on the highlight. From a top-secret government, lab come two genetically modified lifestyles. One is a majestic dog of extraordinary skill. It has the different, hybrid beast of a wildly violent universe. And both are free. Bestselling novelist Dean Koontz grants his several terrifying, exciting, and compelling stories. The sensitive tale of a man and a woman jumped in a relentless passion of humanity’s most mysterious creatures. This work was important enough to justify three separate movies. All are doing it as the reason for their plan boundaries, although many recognize the work itself is the obvious champion and guarantees a place on the list of the greatest Dean Koontz novels. This work is what launched Dean Koontz into his state as a best-selling writer, and it’s obvious to understand why. Einstein, the dog, keeps the show. Also, you’ll be rooting for him every action of the process.

Are you someone who enjoys compelling novels with diverse roles? If so, you agree to love Dragon Tears. Notwithstanding the working title, there are no original monsters, though the page-turning refreshments and friendly canine Woofer will hold your content all the identical. A suspenseful adventure anticipates numerous roles (also a dog!), as constant uncertainty will retain you yearning for further. The San Diego Union-Tribune calls it “A razor-sharp, nonstop, suspenseful story,” and we cannot find truer words. Followers fell in love with the sensitive characters, unexpected plot twists, and fast movement. DRAGON TEARS may fall summary of some of his former terrifying works; it yet is prepared with sufficient apprehension to settle Koontz’s loyal fans. Detective Lyon and his companion, Connie Gulliver, operate in the Southern California city of Laguna Niguel. Lyon is shown as someone who thinks in sequence. In a world that he perceives as leaning towards disorder, he boastfully and defiantly queries completeness in everything he encounters.

The Mask is another spine-chilling story from the bestselling artist of indecision, Dean Koontz. It is excellent for supporters of Stephen King, including Richard Laymon. Paul and Carol Tracy are a blissfully united, career-oriented couple who are throbbing to raise a child. Carol was previously a distressed pregnant teen who delivered her baby up for adoption. In the birthing method, she dropped her strength to bear another personal baby (and nearly missed her life). This work was penned in 1981, so it is a little isolated yet still holds up as a spooky tale. The suspense was the shooter because you didn’t understand who this strange lady was and everything she had to make with the Victorian girl from the beginning of the work. During told mystery girl would suit almost controlled under anesthesia, spirits ran unchecked in the central couple’s apartment, and a home cat ran berserk and attempted to destroy an older woman. But, the ending is anticlimactic.

Dean Koontz’s Intensity bridge-whist the impossible and the terrifying in his treatment of four conventions followed by eighteenth, including nineteenth-century gothic authors. Chyna is a survivor, toughened by a lifetime conflict for security and dignity. Presently she will be questioned as never since. At the front, her purpose is to grow out a living – until, by accident, she discovers the identification of Vess’s next designated victim, a faraway young only she can release. What initiates the novel Intensity alone is the complete extensive leap into the character’s psyche. You’ll understand what performs Chyna and the shooter Edgar tick; also, you’ll learn what guided them to that Midnight, whether it is Chyna’s hopeful and honest worldview or Edgar’s rebellious sadism. Each of them is traversed in excellent intensity. Despite wasting their experience, the pacing never moves down, with exceptional action displays to complement the psychic battle and dangerous cat and mouse dynamics.

In his inventive, unique novel, Koontz rises, exceeding the boundaries of Midnight and his other successes. The main characters, married agents Julie and Bobby Dakota, agree to support terrified amnesiac Frank Pollard figure out something he does while he’s unconscious. Frank Pollard is scared to fall asleep. Every daylight he awakens, he notices something unfamiliar—like blood on his palms—a strange story that lacerates his life. Two investigators have been approved to support the haunted guy. Although only one personality—a young guy with Down’s syndrome—can think where their adventures might stop. That is a terrifying situation from which no one ever responds. The text emphasizes out-of-body efforts and data on pests and gems of incredible origins, no limited fantastic than the Pollard rascals, who could inspire jealousy in Lucifer himself.

Strange Highways is a collection series highlighting one book, one novella, and twelve different short tales. Each work is a satisfying activity on its own. The entire combination creates an unbelievable one-stop address for those attempting page-turning development. This is Koontz’s spellbinding combination of shares interconnected by the unfamiliar roadways of personal involvement: experiences, horrors, failures, and successes. One rain-swept Sunday midnight when Joey was twenty years old, on his walk backward to college following a weekend with his parents, Joey Shannon caught the opposite highway – and from that moment, nothing ever worked fairly for him over. Precisely twenty years later, on different rain-swept Midnight, Joey discovers himself at the very crossroads, staring below the path never taken.