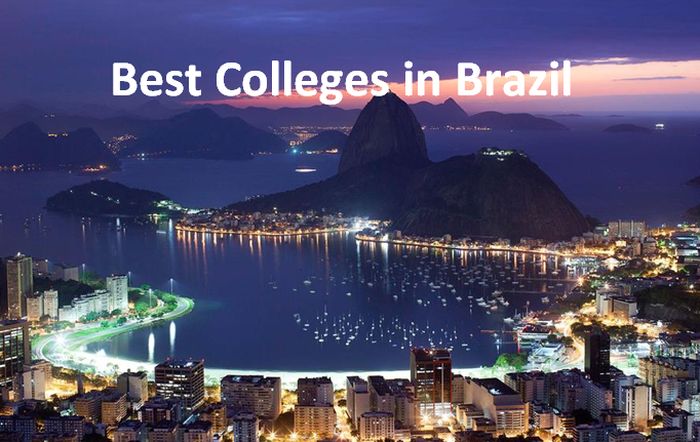 Brazil is the largest country in Latin America and the fifth largest country in the world, with a population of over 210 million people. Choosing the best college education for your bright future is an important decision. If you are looking for the top-ranked colleges in Brazil, then you have come to the right place.

In our given list of the Best colleges in Brazil, you will easily find all the information about the top-ranked Brazil universities along with their tuition, ranking, contact information etc. Check out the complete list and select any one that will fulfill your needs. Good luck!!

The University of São Paulo is a public university in the Brazilian state of São Paulo. USP is involved in teaching, research and university extension in all areas of knowledge, offering a broad range of courses. Today USP has five hospitals and offers 247 undergraduate programs and 239 graduate programs in all areas of study. The university houses altogether 24 museums and galleries – with half a million visitors a year – two theaters, a cinema, a TV channel, and an orchestra. The University of São Paulo has 42 libraries spread over its schools.

Established in 1962, Unicamp was designed from scratch as an integrated research center unlike other top Brazilian universities, usually created by the consolidation of previously existing schools and institutes. It offers 153 compared to 70 undergraduate programs. It also offers several non-degree granting open-enrollment courses to around 8,000 students through its extension school. Unicamp offers 70 different degree-granting undergraduate programs, covering nearly all different areas of science.

The Federal University of São Paulo is a public university in Brazil. Its mission was to develop students into health professionals and contribute to medical research. Graduate students gain work experience in this busy, comprehensive medical institution. The hospital also provides health services for underprivileged people. Its several of these campuses offer courses in academic fields beyond UNIFESP’s traditional medical background, such as philosophy, history, and economics.

The Federal University of ABC is a Brazilian institution of higher learning based in Santo André, with operations in several municipalities in the ABC region, all in the state of São Paulo. UFABC is the only federal university in Brazil with 100% of its professors holding Ph.D.s. The UFABC was the first institution of higher education in Brazil to adopt the interdisciplinary bachelor’s degree. The UFABC is the only federal university in Brazil that has 100% of professors with a doctoral degree. The UFABC has student organizations representing groups of students.

It is considered the first technological university and one of the top ten engineering schools in Brazil. Extremely reputable among Brazilian engineering schools, it carries more than 100 years of tradition in teaching. It is one of the best research institutes on Power Systems field in Latin America – Mechanical Engineering, Environmental Engineering, Automation, and Control engineering and Computer Engineering. The Federal University of Itajubá (Unifei) will be represented by two teams in the national phase of the Programming Marathon, scheduled to take place this November in Salvador – BA.

UFMG is one of Brazil’s five largest universities, being the largest federal university. It offers 75 undergraduate degrees, including a Medicine degree, Law and Economics, plus Engineering and Science and Art degrees. It offers 57 Ph.D. programs, 66 MSc programs, 79 Post-Baccalaureate programs, and 41 medical residency programs. UFMG has a population of 49,254 students. The undergraduate students are admitted through the national annual exams called Exame Nacional do Ensino Médio (National High School Exam).

UFRJ is the largest federal university in the country and is one of the Brazilian centers of excellence in teaching and research. In terms of scientific, artistic and cultural productions it is recognized nationally and internationally due to the great teachers, researchers, reviews and assessments made by international agencies. There are 179 undergraduate courses covering all areas of human knowledge and distributed into four types: morning, afternoon, night and integral (all previous three combined) courses.

The Federal University of Rio Grande do Sul

UFRGS is among the largest and highest-rated universities in Brazil, having one of the largest numbers of scientific publications. UFRGS has over 27,000 undergraduate students, over 9,300 graduate students, and more than 2,500 professors. As a public federal institution, students do not have to pay tuition fees to enroll in courses offered by the university. Students are accepted through the vestibular, which is an open examination where the top-placed candidates are offered a placement at the university.

The Pontifical Catholic University of Rio de Janeiro is a community institution of Higher Education. The internationalization of teaching and the exchange between cultures and knowledge are proposals accepted by PUC-Rio in the face of a globalized world. PUC-Rio informs that it only issues diplomas of courses taught by it. For undergraduate admission to PUC-Rio two exams are used: ENEM and its own vestibular test. The results of these tests are used in determining the distribution of academic scholarships to students.

UNESP is part of the state’s higher education system and the only Brazilian member of the Compostela Group of Universities. UNESP has a combined student body of over 45,000 spread among its 23 campuses. It also has 30 libraries, two hospitals, three animal hospitals, five farms, and seven complementary units. UNESP employs about 3,500 teachers, in addition to another 10,600 employees in various positions. The university provides 171 options for undergraduate courses in 62 higher education professions, with a total of over 45,000 students, of which 5,600 new professionals are trained annually by UNESP. About 10,000 students study in 118 postgraduate programs, with 117 academic masters, 6 professional masters and 93 academic doctorates.