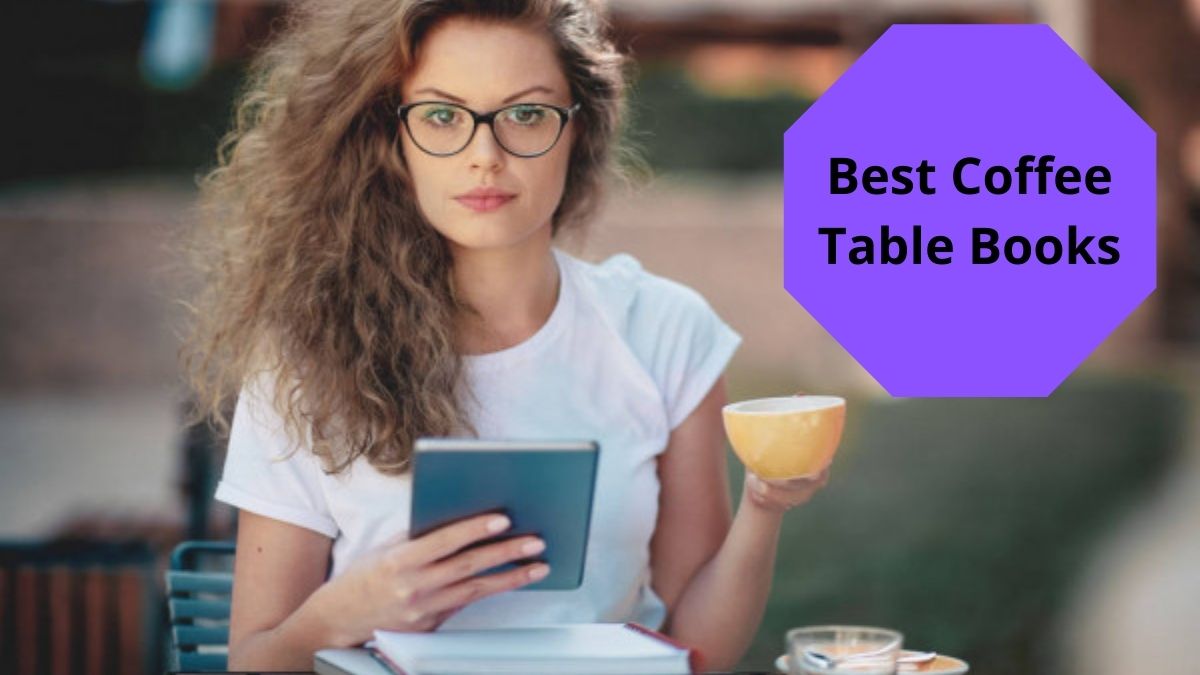 A coffee table book, sometimes known as a cocktail table book, is a large, generally hard-covered book designed to be displayed on a table in an area where visitors are entertained and from where it may be used to spark discussion or pass the time.  It is usually very pricey and is supposed to be visually appealing; it typically does not include a lot of content. The majority of these books are based on the arts, and they are usually located on coffee tables where visitors to a residence may see and enjoy them. Coffee table books provide a visceral experience, which is frequently missing in today’s digital world. They remind you to put your phone down and find something else to do with your time. Guests will like reading coffee table books since they are distinctive. They elicit contemplation and dialogue.

Coffee table books are a way to showcase your personality and who you are. You’re more likely to choose a book that represents a facet of your personality, indicating something about your interests or values. Placing the book on the coffee table is practically a silent confession of your unabashed self since you find it meaningful whether or not everyone else finds meaning in it. The living room is where you’ll almost certainly share space with your visitors at some point, and placing a huge book on the coffee table between you and another person provides some boundaries for what you may discuss. Coffee table books are like grown-up picture books that keep us youthful at heart. Words can’t stimulate sentiments and ideas as pictures can. Coffee table books are a wonderful alternative for folks who enjoy room decor but have limited wall space but still want to liven up their living space with collectables. Such are some of the many benefits of why your coffee table should be adorned with a couple of these beauties. One can easily find a coffee table book on almost anything and everything under the sun.

Here is a list of the top ten coffee table books of 2021.

1. Salad For President: A Cookbook Inspired by Artists

With contributions and interviews from artists/creative professionals such as William Wegman, Tauba Auerbach, Laurie Anderson, and Alice Waters, the founder of the hugely famous Salad for President blog delivers a visually rich compilation of more than 75 salad recipes. Julia Sherman is a photographer and the founder of the Salad for President campaign. Sherman is also a mixed-media artist who exhibits alongside her culinary work. Salad for President is a fascinating look at how artists prepare their favorite food. She interviews and photographs sculptors, painters, photographers, and musicians in their homes and gardens as they cook. Salad for President is both a practical resource for healthy, fulfilling dishes and an utterly unique look into the realms of food, art, and everyday behaviors. Recipes are mixed with talks with artists and activists in this book, a unique endeavor with gorgeous drawings. This book is both a coffee table book and a cookbook.

This is a gorgeous book by Author and garden designer Sophie Walker wherein she’s delving into the Japanese garden in depth through a series of articles and a collection of 100 featured gardens, which range from ancient Shinto shrines to royal gardens to modern Zen designs. In freshly commissioned writings, leading artists, architects, and other cultural practitioners provide personal viewpoints. This book delves into the art, culture, and aesthetics of the Japanese garden in great detail. Walker investigates the philosophical, abstract aspect of the Japanese garden and investigates the many intricate levels of meaning in this book. Sophie’s writing is peppered with notes on specific gardens that relate to the text’s many themes. Byodo-in, Daisen-in, Fushimi Inari Taisha, Yokoo House, Korakuen, Tairyusansou, and Taiko-an are examples. Simple descriptions provide an overview of each garden, including the year, designer, location, and kind, and they are accompanied with colour and black and white photos, with a focus on previously unreleased images shot by cultural icons whose work is influenced by the Japanese garden.

3. The Best of Nest: Celebrating the Extraordinary Interiors from Nest Magazine by Todd Oldham and Joe Holtzman

The Best of Nest is the first full collection of Nest, the magazine that changed the way we think about interior design and space. This artistic book curated by the master publisher and erstwhile fashion designer Todd Oldham features choices from all 26 issues in various portfolios showcasing great authors and photographers, including Michael Cunningham, Patti Smith, Nan Goldin, and Derry Moore. The Best of Nest includes gatefolds, foldouts, die cuts, and silver foil and glitter covers, replicating many creative and unique design aspects that endeared Nest to its devoted followers throughout the world.

4. The Beer Pantry: Cooking at the Intersection of Craft Beer and Great Food

This is a book full of recipes to cook for your Favorite craft beer. Adam Dulye, the Brewers Association’s chief chef, has created over 75 dishes that will take your craft beer meal from “pub grub” to chef-driven beer cuisine. Learn how to pair each of the six taste characteristics of craft beer (Crisp & Clean, Hoppy & Bitter, Malty & Sweet, Rich & Roasty, Fruity & Spicy, and Sour, Tart, & Funky) with food. The dishes in this book will shatter the myth that beer is only fizzy stuff served in pitchers with fried food. Radishes Dipped in Hop Butter, crisp salads like Four-Carrot Salad with Toasted Grains, robust meals like Smoked Beef Brisket with Rosemary Confit Potatoes, and even desserts like Dark Chocolate Soufflés are among the appetizers and snacks available. This book is a treasure mine of ingeniously easy beer-inspired cuisine, along with beer suggestions that come with each dish.

Grimes is a musician and an artist, and this is her debut art publication: a colouring book with over 16 unique digital pictures and poems made by artificial intelligence. The DIY production and audience interaction crucial to Grimes’ work are reflected in her debut art publication. The colouring book’s format is inherently incomplete, but it welcomes participation in the same way as the artist’s previous Grimes Art Kit, a collaborative initiative that allows fans to make and share music videos using official Grimes footage and open-source digital materials. Using your own tools, such as oil paints or crayons, you may edit and activate the artist’s work. It’s a project for artists of all ages, like most colouring books. The artist, who is also a new mother, learnt about newborns’ fledgling visual awareness and their fondness for strong monochrome images while producing the book and has employed the same in the book and invites parents to use it as an eye-tracking game.

This hymn to pale interiors by Chrissie Rucker, creator of The White Company, is a monument to the power of neutrals. The book is a masterclass in highlighting texture, natural light, and ornamental elements with the use of white. Chrissie, the founder of The White Company, wrote this book to commemorate the company’s 25th anniversary. This gorgeously shot issue features some of our favorite houses, with three unique interior styles – town, rural, and coastal – as well as a wealth of easy and ingenious decorating advice to help you turn a house into a home. Chrissie shows us through her three stunning houses and inspires us with her minimalist style. The book, which is divided into three sections – Country, Town, and Coast – and is illustrated with specially commissioned photographs by top interiors photographer Chris Everard, delivers both the wisdom and the inspiration needed to alter your house.

7. Pantone: The Twentieth Century in Color

Colour specialist Leatrice Eiseman and colour consultant Keith Recker identify 100 years of colour impacted by historical and cultural landmarks using more than 200 pictures of art, fashion, commerce, and interiors. The trends are depicted in both well-known and rarely seen art. Each decade has eight colour palettes that provide a wide range of colour contrasts together with an interesting narrative that touches on a variety of cultural events. This book examines how colour and cultural history interact and make their way into our daily lives. The writers take a curatorial approach to explore the most popular colours each decade and why they became so popular. It’s a unique perspective on how what was going on in society was actually reflected in our lives through upholstery, wall paint, carpets, and other fabrics and accessories. As the century comes to an end, many photographs elicit a flood of recollections as colours evoke the era’s essence.

This volume of Record Covers features a selection of the finest rock album covers from the 1960s through 1990s from Michael Ochs’ vast private collection as a music archivist, disc jockey, writer, and former record publicist. This is a broad look at an underrated art genre that is both a walk down memory lane and a study in the development of cover art. The covers of records are a reflection of our lives and eras. They cover subjects like love, life, death, fashion, and rebellion, just like the music on the CDs. For music enthusiasts, album covers represent an era, a certain point in their lives. Many of them are pieces of art that have become as well-known as the music they represent. For example, Randy Warhol’s covers, such as the banana he drew for The Velvet Underground.

Jonathan Waxman, the California chef credited with bringing his home state’s bright, sunny cooking to New York decades ago, has been the chef de cuisine at Barbuto, a casual, inviting, and well-praised West Village restaurant since 2004. Jonathan Waxman’s Barbuto is one of the few New York City restaurants that has maintained its currency, quality, and charm for as long as he has. For the first time, The Barbuto Cookbook immerses home chefs in the history, culture, and cuisine of the Greenwich Village eatery that has become a New York culinary destination as well as a local favorite. Jonathan and his colleagues supply all of the equipment needed to recreate Barbuto masterpieces, including JW roast chicken, unearthly kale salad, specialized pizzas, gnocchi, magnificent desserts, and more. Every recipe is a flavorful restaurant spectacular reimagined for easy home preparation.

The Guerrilla Girls are a group of political feminist artists that use art, cinema, politics, and pop culture to expose prejudice and corruption throughout the world. The Guerrilla Girls blasted onto the scene in 1985 with their first campaign against sexism in the art world, donning gorilla masks to hide their identities. And now, 35 years later, this anonymous collective has published their first book, aptly titled The Art of Behaving Badly, which includes hundreds of photographs from their street campaigns and large-scale exhibitions exposing discrimination, sexism, racism, and corruption international art world. Plus, each book includes a punch-out gorilla mask that encourages readers to get involved in the campaign. The pictures are contextualized with captions written by the Guerrilla Girls themselves. The book delves into their well-researched and multifaceted critique of patriarchy.