Best Cities in Texas to Visit 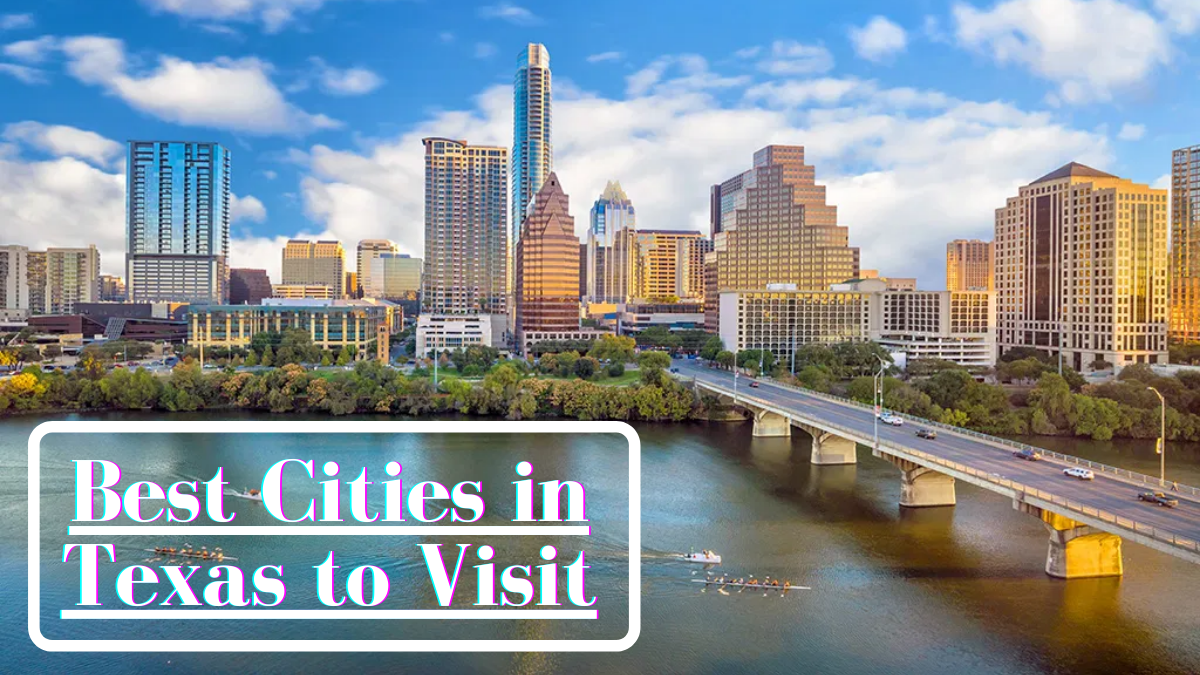 Texas is a popular destination for locals and international visitors. Within this second largest state in the nation, people can encounter a wide array of climates, scenery, and cultures. Moreover, depending on the time of year, Texas can be a beautiful state where you can experience multiple seasons all at the same time. If you are looking for beach vacations, there are some popular spots like Galveston Island, Padre Island, Crystal Beach, South Padre Island, Rockport Beach, Port Aransas, and Boca Chica. Aside from the usual sand and water, several of these beaches feature boardwalks, carnival attractions, and more to keep you entertained.

Austin is the capital city of the state, Texas, in the United States. It is also the seat and largest city of Travis County, with portions extending into Hays and Williamson counties. Incorporated in 1839, Austin is the eleventh most populous city in the US, the fourth-most-populous city in Texas, and the second-most-populous state capital city. This city has been one of the fastest-growing cities since 2010 and considered a “Beta,” global city as categorized by the Globalization and World Cities Research Network. Austin is located in Central Texas within the greater Texas Hill Country, and it is home to numerous lakes, rivers, and waterways, including Lady Bird Lake and Lake Travis on the Colorado River, Barton Springs, McKinney Falls, and Lake Walter E. Long. Residents of this city are called Austinites, and they include a variety mix of musicians, college students, government employees, digital marketers, high-tech workers, and blue-collar workers.

San Antonio is officially known as the City of San Antonio and is the seventh-most populous city in the United States. Also, it is the second-most populous city in both Texas and the Southern United States. San Antonio was founded as a Spanish mission and colonial outpost in 1718, and later the city became the first chartered civil settlement in present-day Texas in 1731. In the past few decades, the city’s deep history is contrasted with rapid growth, and its growth was one of the fastest among the top ten largest cities in the US. San Antonio consists of five 18th-century Spanish frontier missions(including The Alamo and San Antonio Missions National Historical Park), the River Walk, the Tower of the Americas, SeaWorld, the Alamo Bowl, and Marriage Island. Commercial entertainment in this city includes Six Flags Fiesta Texas and Morgan’s Wonderland amusement parks. Along with that, it is home to the five-time NBA champion San Antonio Spurs and hosts the annual San Antonio Stock Show & Rodeo, one of the largest such events in the US.

Dallas is another popular city in the state of Texas in the United States. Also, it is the largest city in the seat of Dallas County and the ninth most populous city in the US, and the third-largest in Texas. Dallas is located in North Texas and is the main core of the largest metropolitan area in the Southern United States and the largest inland metropolitan area in the US that lacks any navigable link to the sea. Dallas has a strong industrial and financial center and a major inland port due to the convergence of major railroad lines, interstate highways, and the construction of Dallas/Fort Worth International Airport, one of the largest and busiest airports in the world. Some of the dominant sectors of this city include defense, financial services, information technology, telecommunications, and transportation. Dallas is home to ten Fortune 500 companies within the city limits. Along with that, over forty colleges and universities are located in Dallas that makes it the most of any metropolitan area in Texas.

South Padre Island is a resort town in the county of Cameron that is located in the state of Texas in the US. South Padre Island is known for many water sport activities, with personal watercraft rental, kiteboarding and dolphin watches being the most popular. Other favorite activities include horseback riding adventures on the beach and ecological tours that explore Padre Island National Seashore. Fishing is also a popular activity in and around South Padre Island. Every year, the Texas International Fishing Tournament is held with winnings totaling almost a quarter-million dollars. Other fishing tournaments are the Ladies Kingfish Tournament, the Redfish Rodeo, and the Hooters Tournament, just to name a few. This island is a popular spring break destination in march for college students from around the world, and the rest of the year, it is a popular family resort destination.

Galveston is a port and a coastal resort city of the Southeast Texas coast on Galveston Island and Pelican Island in the state of Texas in the US Galveston is the county seat of surrounding Galveston County and the second-largest municipality in the county. Galveston, or Galvez’s town, was named after the Spanish political leader and military in the 18th century: Bernardo de Gálvez y Madrid, Count of Gálvez (1746–1786), who was born in Macharaviaya, Málaga, in the Kingdom of Spain. Most of this city’s economy is centered in the tourism, health care, shipping, and financial industries. The University of Texas Medical Branch campus plays a major role in the economic force of Galveston. Also, this resort city is home to six historic districts containing one of the biggest and historically collections of 19th-century buildings in the US, maintained by the National Park Service in the United States Department of the Interior with over 60 structures listed on the National Register of Historic Places.

Fort Worth is the thirteenth largest city in the US and the fifth-largest city in the state of Texas. Also, this city is the second-largest city in the Dallas–Fort Worth–Arlington metropolitan area, which is the fourth-most populous metropolitan area in the United States. In 1849, this city was originally established as an army outpost on a bluff overlooking the Trinity River, and later it became a center of the Texas Longhorn cattle trade. Fort Worth is home to many world-class museums designed by globally known contemporary architects and the Van Cliburn International Piano Competition. Fort Worth also has the Kimbell Art Museum, which is considered to have one of the best art collections in Texas. This city also has several university communities, namely Texas Christian University, University of North Texas Health Science Center, Texas Wesleyan, and Texas A&M University School of Law. Also, several multinational corporations, including Bell Textron, American Airlines, BNSF Railway, and Chip 1 Exchange, are headquartered in Fort Worth.

Amarillo is a city in the state of Texas in the United States and located in the sear of Potter County. This city is the fourteenth most populous city in Texas and the largest city in the Texas Panhandle.Amarillo was originally named Oneida and situated in the Llano Estacado region. It was once the self-assigned“Helium Capital of the World” for having one of the country’s most productive helium fields. Amarillo is also known as “The Yellow Rose of Texas” and most recently “Rotor City, USA” for its V-22 Osprey hybrid aircraft assembly plant. This city operates one of the largest meat-packing areas in the country. Amarillo also has the only nuclear weapons assembly and disassembly facility in the country named Pantex. The existence of this facility in the city gave rise to the nickname “Bomb City.”The attractions Cadillac Ranch and Big Texan Steak Ranch, are located adjacent to Interstate 40. US Highway 66 also passed through the city.

El Paso is a city located in the county seat of El Paso County in the far western part of the US state of Texas. Also, it is the 22nd-largest city in the United States, the sixth-largest city in Texas, and the second-largest city in the Southwest. Along with that, the city of El Paso ranks fifth in the nation with the largest proportion of the Hispanic population. El Paso is also home to three publicly traded companies, and former Western Refining, as well as home to the Medical Center of the Americas, now Marathon Petroleum, the only medical research and care provider complex in Southern New Mexico, and West Texas, and the University of Texas at El Paso, the city’s primary university. This city hosts the annual Sun Bowl college football postseason game, the second-oldest bowl game in the country. Some of the annual cultural events and festivals of this city are Amigo Airsho, KLAQ Great River Raft Race, Southwestern International PRCA Rodeo, Fiesta de las Flores, El Paso Balloonfest, and El Paso Sun City Pride. There are also music festivals like El Paso Downtown Street Festival, Neon Desert Music Festival, Music Under the Stars, Sun City Music Festival, and Texas Showdown Festival.

Arlington is another popular city in the state of Texas that is located in Tarrant County. This city forms part of the Mid-Cities region of the Dallas–Fort Worth–Arlington metropolitan statistical area and is a principal city of the region and metropolis. Arlington is known for its University of Texas, the Arlington Assembly plant used by General Motors, the Nuclear Regulatory Commission Region IV, Mensa International, Texas Health Resources, and D. R. Horton. In addition, this city hosts the Texas Rangers at Globe Life Field, the Dallas Wings the Dallas Cowboys at AT&T Stadium, at College Park Center. Also, Arlington became the world headquarters for bowling because of the relocation of the US Bowling Congress, and the International Bowling Museum, and the Bowling Proprietors Association of America, and the Hall of Fame.