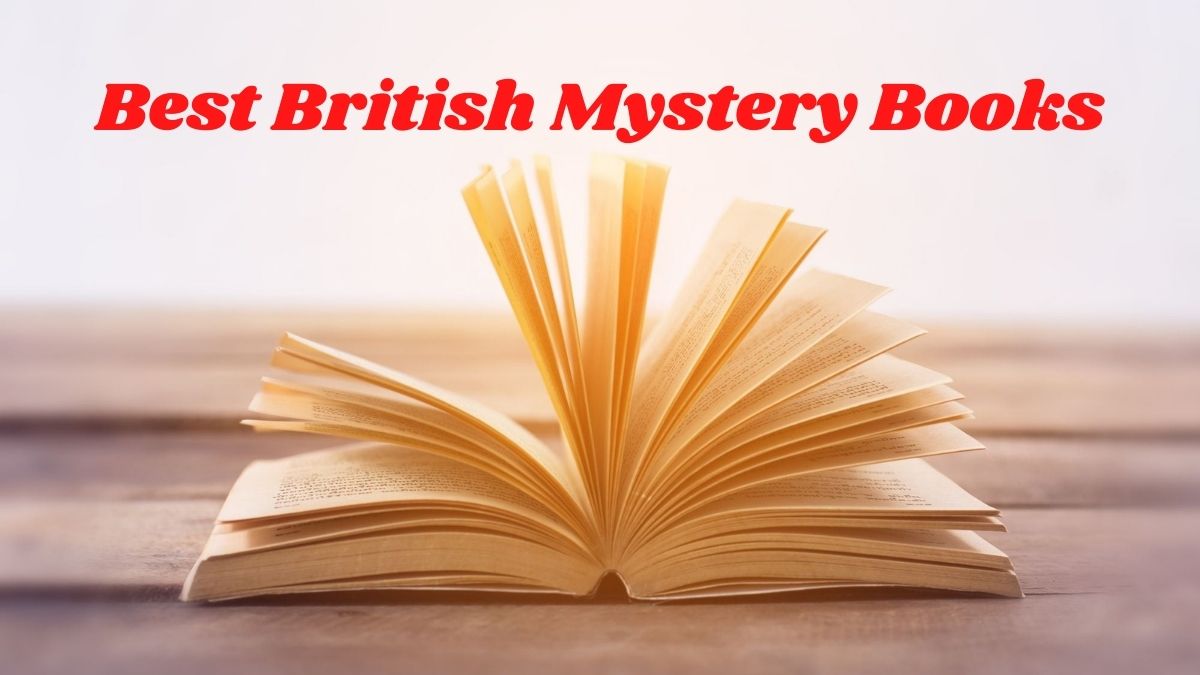 Undoubtedly, Mystery is the most intriguing genre of all and has the capability to captivate readers like magic. Suspense, doubts, crimes, murders, wit, investigation, lies, and truths, all these factors come together in Mystery novels to make it an unforgettable reading experience for readers.

Are you among those readers who enjoy reading mysteries more than any other genre? Then the good news is you have got more to add to your reading list. Enough of reading American Mysteries, how about you switch to English authors and get indulged in books that are way more different and interesting? Here are some of the best Mystery books written by British authors that should definitely be on your reading list.

1. And Then There Were None by Agatha Christie

And Then There Were None by Agatha Christie has a unique plot revolving around many characters who receive a mysterious invitation by the same person, and are mysteriously connected to a murder.

Published in the year of 1939, the novel opens with a mysterious invitation by Mr. and Mrs. Owen to visit the secluded Indian Island, and all the characters are invited, set on their journey to respond to the invitation. Mysteriously, all the characters share a collective memory and relation with a past death case that they recall during their journey. All the characters have separate reasons to visit the island, and when the story begins to unfold and the characters come to a realization that they are not familiar with Mr. and Mrs. Owen, everything begins to turn mysteriously dangerous. Christie’s finest work of crime fiction And Then There Were None is truly fascinating!

A debut novel that receives a lot of popularity, P.D. James’ Cover Her Face revolves around the mysterious murder of the young and beautiful housemaid Sally Jupp, who is found dead on her bed, mysteriously behind the bolted door.  A closed-door might have made the killer think it will be considered a suicide, but when the case comes into the hands of James’ brilliant creation, detective Adam Dalgliesh of Scotland Yard, things begin to take a different turn.

Shifting his suspects from one family member to other, and slowly finding the pieces of the puzzle to resolve the case, Cover Her Face has rather more shocking truths to unveil that are totally unexpected.

3. The Hound of the Baskervilles by Sir Arthur Conan Doyle

The creator of one of the finest characters one has ever brought to life, the unbelievably intellectual detective SherlockHolmes who has a solution to every impossible mystery, Sir Arthur Conan Doyle has blessed the world with some of the most fascinating stories of mystery and suspense. the hound of the Baskervilles by Doyle is one of those books of suspense, thrill, and mystery that will leave an everlasting impression on its reader.

Published in the year 1902, the novel is based on a local legend of a satanic, supernatural hound that haunted the Baskerville Hall and its heirs for generations in Dartmoor in Devonshire, England. Sherlock Holmes and his assistant Doctor Watson visit Devonshire after the mysterious death of the former owner of Baskerville Hall, Sir Charles Baskerville to answer the call of the new heir Sir Henry Baskerville, who is haunted by the fear of death and losing his life to the legendary and supernatural killer hound. Sherlock and Doctor Watson’s investigating journey takes the reader to an experience mingled with horror and mystery in almost every step and a couple of intriguing characters who maintain the tension of the novel.

Set in the year 1910, when England was at peace and the rule of aristocracy prevailed on the society, Masie Dobbs, a young woman establishes herself as a Private Detective. Masie began her career at the age of thirteen as a maid appointed at an aristocratic household of London, when her employer Lady Rowan Compton recognizes her wit, and comes across Lady Rowan’s European Elite friend Maurice who serves as an investigator, and recognizes Masie’s intuitive gifts, she enrolls her into the Girton College of Cambridge. Thus it is from here, Masie’s life begins to take a positive turn.

From completing her education to being appointed and trained as a nurse during World War I, Masie goes through a lot that eventually shapes her character as a private detective. Her first-ever case tests her abilities as a detective and is indeed impressive. A New York Times Notable Book of the Year, and Agatha Award Winner for Best First Novel, Masie Dobbs will win your heart for sure!

A New York Times Bestseller, Magpie Murders by Anthony Horowitz is a brilliant thriller that shocks and at the same time entices readers for its unique plot and style. Susan Ryeland is an editor, when she comes across Alan Conway’s recent manuscript that is soon to turn into a popular novel, she finds the plot mysterious. Conway is a celebrated crime writer and is friends with a famous detective, Atticus Pünd whom Susan knows.

The manuscript that Covey presents to Susan involves a case that is investigated by Atticus Pünd, but the more she dives deeper into the case, Susan suspects there is something more dangerous hidden behind these pages. A novel that revolves around murder, jealousy, greed, and ruthless ambition, is bound to leave readers amazed.

Deborah Crombie’s A Share in Death is one of those mystery books that will keep you glued till the end for it features an interesting case of murder in Yorkshire, which is investigated by Scotland Yard’s Superintendent Duncan Kincaid while he is on his luxurious holiday. A planned holiday turned into a responsibility of solving the murder mystery of the floating body at the whirlpool bath, takes readers into an intriguing case of an investigation, that Kincaid carries on with the help of his young assistant, Sergeant Gemma James.

The resolving of this murder mystery takes readers through many twists and turns, and the readers get to witness the amazing investigating qualities of both Kincaid and his witty assistant.

7. Whose Body? by Dorothy L. Sayers

Dorothy L. Sayers, a popular name among the British, women crime novelists, presents readers with an English murder mystery that is truly a masterpiece. Whose Body? Opens with a corpse found in a bathtub arousing confusion of whose body it is, but when Lord Peter Wimsey is after investigating the case, he links the body with the sudden disappearance of a well-known financier. And this clue takes the plot to unexpected turns which turns out to be a “merry chase” to discover the murderer.

Whose Body? Became very popular among readers when it was first published and marked the debut of Dorothy’s most popular creation, Lord Peter Wimsey, who continued to appear in her other murder mysteries.

8. The Woman in White by Wilkie Collins

Published in the year 1859, The Woman in White remains as one of the finest books of mystery written by an English writer. Colins portrays a real-life criminal case where a fugitive escapes from an asylum dressed top-to-toe in white that leads to two mysterious murders. The main character and a reliable narrator, Walter Hartright remains a witness to this haunting mystery during his stay in London when he is assigned to teach art to two young women who belong to one of the richest families of London. Through multiple narratives, Colins portrays a wonderful story of romance, mystery, murder, and suspense that is truly captivating and maintains a series of tension unless the face behind the murders is revealed. The woman in White is believed to be the first and most influential book of the Victorian era that combined Gothic horror with psychological realism in the most beautiful way.

9. A Room Full of Bones by Elly Griffiths

Author of many celebrated Crime and Mystery novels, Elly Griffiths in A Room Full of Bones presents readers with a thrilling story of murders that serve as mysteries to be resolved by Ruth Galloway. When two sudden and suspicious death occurs, Ruth and DCI Harry Nelson cross paths during their investigation, and together they must unfold these mysteries, that ultimately bring out some bitter truths of drug smuggling, the mysteries of aboriginal skulls and so much more. A unique plot presented in a captivating style, Elly Griffiths is truly a genius of Crime and Mystery.

10. Murder on the Orient Express by Agatha Christie

A book later adapted into a movie for its extreme popularity, Murder on the Orient Express is probably the best masterpiece created by Agatha Christie. Published in the year 1934, the plot revolves around the Orient Express where Hercules Poirot, the private detective, and retired Belgian Police officer, is on a trip to his home in London. The elite Orient Express is suddenly stopped by an avalanche and the passengers on the train discover there has been a murder inside a cabin, a man named Rachett who informed Poirot the previous night about receiving threatening letters.

This intriguing murder mystery is complicated and has many twists and secrets to unfold until Poirot entangles them all to find the murderer who is hiding amongst the passengers of the Orient Express.

From Sir Arthur Conan Doyle, Dorothy L. Sayers, Agatha Christie to the most recent modern crime writers like Elly Griffiths and Anthony Horowitz, there are so many engaging mystery novels that await to be read by you. Each of these books on the list is unique and features stories you have never heard of before.