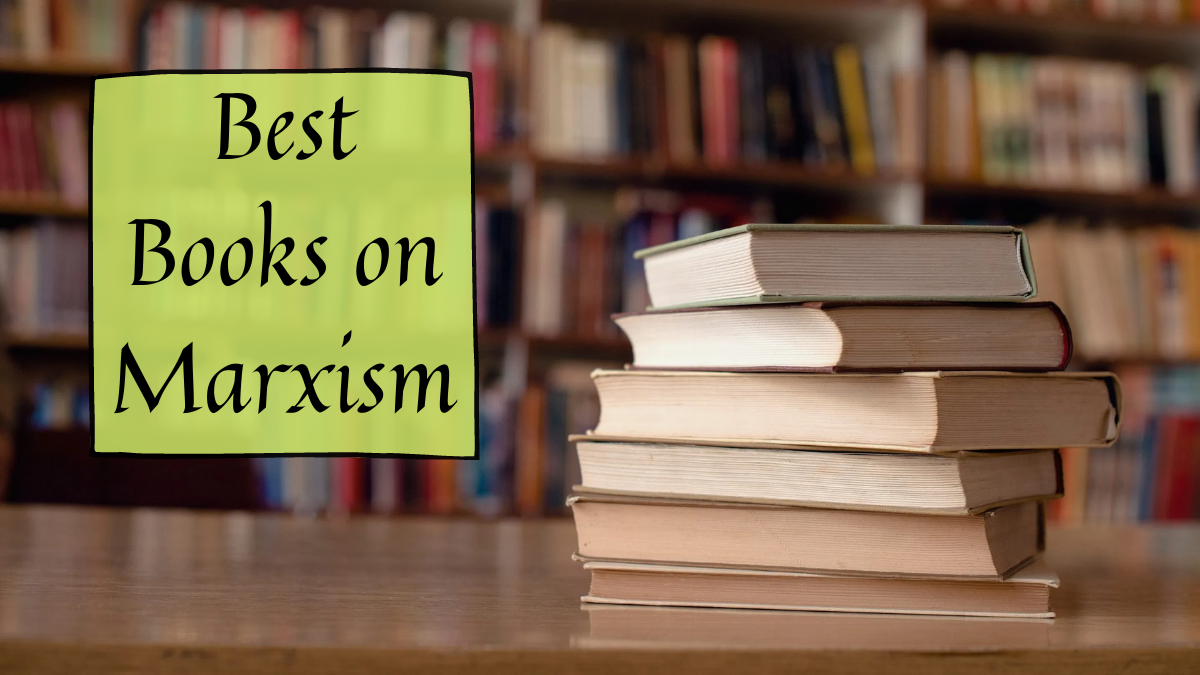 The German philosopher Karl Marx, who shook the world with his revolutionary Socioeconomic ideas, gave birth to “Marxism”, a theory that later became a powerful movement, and redefined the norms of Capitalism. While Karl Marx cannot solely be regarded as shaping Marxism because to a lesser extent, Friedrich Engels was also responsible for its development.

From ideas turning into theories, forming the shape of a book like The Communist Manifesto to deeply affecting Capitalism and the Industrial Revolution, Marxism began to spread and to be accepted widely. Marx’s ideas on anti-capitalist analysis of industrialization, his concerns on how workers were inherently exploited and oppressed under the capitalist system, and many other important factors gave rise to his popularity.

Though Marxism may be a tough area of study for many, and some of you don’t understand it completely but are interested in it, there are many books that can make it a lot easier for you. Here are some of the best books on Marxism that you must read.

1. The Communist Manifesto by Karl Marx

If there is one book that can be regarded as the Bible of Marxism, then it is The Communist Manifesto. This collaboration by Karl Marx and Frederick Engels presented the world with their revolutionary Socioeconomic ideas, that shaped and changed the definition of “Capitalism”.

A book of unified theories, The Communist Manifesto presents the original of “Communist League”, and the doctrines of Communist rule. By providing a new vision to the history, social, political, and economic factors, the “manifesto” shook the world and gave birth to many controversies. Since, the concepts, theories, and the language of the book were not everyone’s “cup of tea”, it began to be misunderstood or disregarded during the 1870s. If you want to dive deep into the Communist League and understand it from its originators, what can be better than this?

A magisterial biography of Karl Marx, Jonathan Sperber in his book Karl Marx: A Nineteenth-Century Life provides readers with deeper insights into the life of Karl Marx, the rise and fall of his revolutionary theories, and portrays the period between his birth in the year of 1818 to his death sixty-five years later, and becoming one of Western civilization’s most influential political philosophers across the globe.

Even after centuries, Marx has continued to outlive and is still regarded as an important Author, Philosopher, and Socialist in the Modern era, his theories are still so relevant today. Though Marx was better understood posthumously, and his theories have undergone many misconceptions, Sperber molds Marx’s life, work and aims into an interesting read for enthusiasts, which makes it easier for them to understand the revolutionary theories and ideas of the greatest Philosopher and Political Activist. From knowing about Marx’s personal life to his rise as a revolutionary figure worldwide, you will experience it all through the words of Sperber.

3. Karl Marx: His Life and Thought by David McLellan

Originally published in the year of 1973, Karl Marx: His Life and Thought by David McLellan is undoubtedly one of the best books ever written by Karl Marx. This book by McLellan is an intellectual biography that records the intimate life of Marx, his childhood, his relations, education to becoming a powerful Socialist, Communist.

A better way to understand Marx completely is to know in-depth about his personal life, and the consequences that led to his revolutionary theories and ideas. From taking a peek at Marx’s dramatic life to writing a ground-breaking book like The Communist Manifesto to reform Communist and Capitalist ideas with the help of Frederick Engels, readers will come across it all, and by the end, they will have a sound understanding of Marxist ideas and the reasons behind it.

The number 1 New York Times Bestselling book by Mark R. Levin, American Marxismpresents Marxism with an American touch. Though a book that provides a philosophical, historical, and practical framework for halting the liberal assault on Constitution-based values, this book is an amazing example of how you can use and introduce Marxist ideologies to deal with Modern issues.

Focusing mainly on American Society and its culture, Levin takes readers to many important modern “isms” like “Democratic Socialism,” “Social Activism” “Progressivism” and so on, along with other significant issues including anti-American purposes of Critical Race Theory and the Green New Deal. From talking about the younger generation to dealing with major modern political issues, and at the same time focusing on Marxism, Levin presents America with a book that can be said, a patriotic, a revolutionary Socialist book or the one that teaches Marxist ideologies to the modern world.

One way to dive deeper into the “Capitalist” ideas of Karl Marx is to read his comprehensive Capitalvolumes. Volume 1 by Marx is a “Critique of Political Economy”, and thus, clearly portrays the economic conditions and the capitalist systems of the time when Marx presented the world with his revolutionary theories and ideologies.

In this volume, you will come across the critical analysis of the political economy, economic laws of Capitalist production, and many other important factors. Marx believed that the motivating force of Capitalism is in the exploitation of labor, whose unpaid work is the ultimate source of profit and surplus-value, and thus goes on to explain his new, dynamic ideas. These ideas were undoubtedly ground-breaking, that reshaped the body of Capitalism, and change the perspectives of Industrialists. This volume is extremely important to read if you are fascinated with Marxism.

6. Karl Marx’s Theory of History by G. A. Cohen

Published in the year 1978, G. A. Cohen’s remarkable book on Karl Marx’s Theory of History is a classic version of Marxism presented with a modern touch. Cohen in this book features advanced philosophical techniques focusing on analytical Marxism. An intellectual movement in history that presented the world with revolutionary ideas, Cohen takes Marx’s theories and ideas to dive deeper into the history of materialism, Capitalism, and the demise of the Soviet Union. Throughout this book, readers will come across important historic, political, and economic factors that are deeply connected to the life of Marx, and are further drawn towards modernist issues.

7. The Devil and Karl Marx: Communism’s Long March of Death, Deception, and Infiltration by Paul Kengor

While Karl Marx is celebrated even after centuries for his Capitalist ideas, we all know that it possesses many flaws, and these flaws find a way to Paul Kengor’s The Devil and Karl Marx. Kengor regards Marx as a man with evil ideas, his twisted ideologies, and horrific theories were enough to create a hell for Communism.

Kengor believes no other theory in history has led to so many innocent deaths, and this flawed theory of Marxism by Karl Marx is the reason behind it. Since everything has both a good and bad side, in the same way, Kengor takes readers into the darkest ends of Marxism, and the evilness that hides behind it.

8. Why Marx was Right by Terry Eagleton

One of the most powerful books written on Marxism, Terry Eagleton through his book Why Marx Was Right brings ten of the most common objections to Marxism to the limelight to discuss them in detail, and portray the issues of prejudice, political tyranny, and other economical issues.

This book by Eagleton is undoubtedly a combative, controversial read, that will thoroughly engage readers into discovering the “unknown” or least talked about areas of Marxism.

David Leopold’s The Young Karl Marxist an important study of Karl Marx’s early writings. This book features the stage of Marx when he just discovered the power of “pen and paper”, and reflects his powerful and imaginative intellect used insignificant issues. From understanding his earlier works from a political dimension to taking account of historical issues, this book will provide a radical and persuasive reinterpretation of Marx’s complex and often misunderstood views of German philosophy, modern politics, and human flourishing. This book without a doubt is a must-read for all Marxism enthusiasts and can be a great beginning for those wanting to begin understanding the theories of Marxism and its originator.

10. Reconstructing Marxism: Essays on Explanation and the Theory of History by Erik Olin Wright, Andrew Levine and Elliott Sober

The last book of this list is rather a remarkable collection of important essays on Marxism, Presented by Erik Olin Wright, Andrew Levine, and Elliott Sober. The essays of the collection are of great importance for it deals with the fundamentals of Marxist theories, and its prospects for the future. From taking Classical Marxism to Reconstructing it, these essays will provide deeper insights into the issues and factors of Marxism. From analyzing the classical theory to bringing readers back into the modern state of Marxist theory, this collection will be treasured by those who want to study or understand in-depth fundamental philosophical and sociological issues of Marxism.

These 10 books are undoubtedly some of the best books ever written on Marxism and must be included in the collections of anyone who admires or want to know about Karl Marx and his revolutionary theories and ideas.