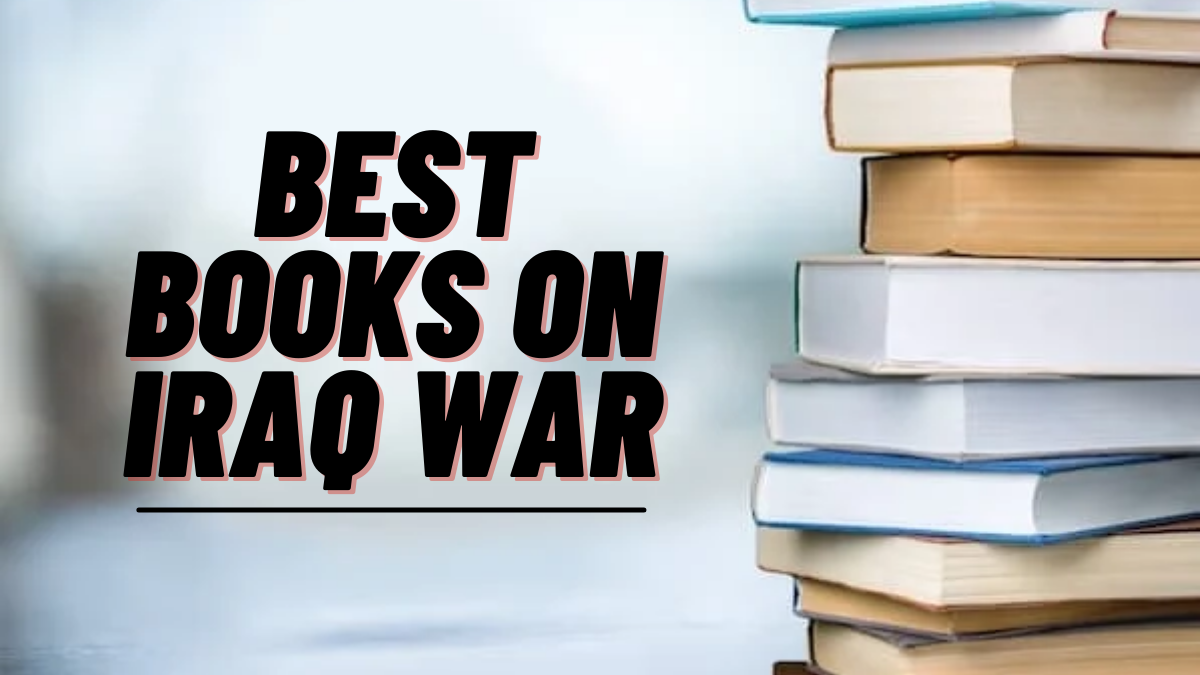 The Iraq War also called the Second Persian lasted between the years 2003 to 2011 when the combined troops of the U.S.A, Britain, and other nations came together to invade Iraq in a mission to destroy their powerful weapons. The war eventually ended in the year of 2011, but all these years of chaos and tension gave rise to many historical events and numerous deaths.

If you are looking for books that cover the events of the Iraq War, then here are the top-10 books on our list that will spellbind you with their authentic plots inspired by original accounts.

1. Dreaming of Baghdad by Haifa Zangana

Dreaming of Baghdad is a beautiful piece of work by Haifa Zangana that portrays the true picture of Iraq, and how it had been consistently under torment, political tensions, and ruled by people like Saddam Hussein. Zangana was among those who resisted Saddam’s rule, and in the novel, she revisits her memories of Iraq in the 1950s to portray a plot that revolves around her childhood, her involvement with activists against Saddam Hussein’s government, and the tortures that were meted out to prisoners in the Jail. In a time when countries like Iraq and Afghanistan are at war, Zangana focuses more on the experiences of its people than the political outcomes.

This novel has a lot to tell to the modern world, lots of harsh truths to uncover, and everything is possible through the author’s travel down to her memory lane.

Thomas E Ricks’ Fiasco is a book wholly based on the Iraq War, and takes readers on deeper insights to the days of actual war that records the “American Military Adventure in Iraq”. The number 1 New York Times Bestseller, Fiasco takes readers on the way to Iraq War, argues how the war was badly planned and executed, how it was mismanaged by the George W. Bush administration and the US Army, and what consequences the countries had to face in return.

A journalist who had reported for the U.S Military for 25 years, Thomas E Ricks pours all his feelings and views regarding the Iraq War in this amazing novel that is authentic. For those of you who want to dive deeper into the events of how the war actually began back in the year 2003, and what political tensions led to these consequences, Fiasco is a perfect book for them. From invading of Iraq by the American Soldiers, restoring order in Baghdad to making matters even worse, this novel is thoroughly engaging.

3. The Iraq War by John Keegan

A war that remains amongst the most mysterious armed conflicts of modernity, The Iraq War by John Keegan provides the world with a true picture of the military campaigns in Iraq, and how Saddam Hussein possessed weapons of mass destruction. A military historian, John Keegan showcases his intelligence through this novel that records the rise of Saddam Hussein, his misuse of intelligence, and the formidable power of America aided by Britain to fight over this threat of the Middle East.

Keegan wrote this book after collecting authentic resources, and converted them into a novel that is unfiltered, presents the readers with an authoritative and challenging account of a war, that made history. Keegan praises the skills of planners and commanders of the war particularly American and British without whom, things would have taken a different turn. A very important novel among the list of many books covering the Iraq War, Keegan has successfully presented a book to the Modern World that will leave a good impression on readers for its lucid narration.

4. The Yellow Birds by Kevin Power

A novel turned later into a film by the same name for its extreme success, The Yellow Birds by Kevin Power is indeed a powerful novel that became a finalist for the National Book Award and covers the heart-wrenching story of two soldiers who desperately try to save themselves from death at the Iraq War. The novel features a tale of uncompromising friendship, loss, and redemption, and revolves around the characters of 21-year-old Private John Bartle and his friend, 18-year-old Private Daniel Murphy also known as ‘Murph’.

A novel that will paint the true picture of the war that only leads to chaos and countless deaths and amongst this, two innocent souls try to protect each other so that they can keep the promises of returning back home. The novel keeps on moving back and forth between past and present that usually cover the experiences of Bartle at the war and his attempts to save his friend. A truly heart-breaking novel that will leave an everlasting impact on readers and make them emotional, this novel deserves to be read by all in the honor of the martyrs who lost their lives for the sake of their motherland- America.

5. Why We Lost by Daniel P. Bolger

Why We Lost by Daniel P. Bolger is a study of war that focuses on Afghanistan and Iraq, and provides answers to all the “Who’s” and “Why’s” through his personal experience who in reality is a retired U.S. Army Lieutenant General.

This book does not have a well-weaved plot or an enticing story, rather it takes readers on a “General’s inside account of the Iraq and Afghanistan War”. These true accounts are enough to take you deeper into the scenarios of war, military troops fighting in foreign lands, and their failures. Bolger throws much light on the government, the political issues, and wrong decisions that brought much chaos to the countries and to the lives of soldiers. If you are looking for a book that will provide you with original accounts of war without sugar-coating words or altering the truth, Bolger through this book will take you right at the roots of failures and wars.

6. The Finish by Mark Bowden

A New York Times Bestseller, Mark Bowden’s The Finish is a novel that records the nail-biting account of hunting down the most-wanted terrorist of the world Osama Bin Laden. After countless missions on Iraq and Afghanistan by the U.S Military, the much-awaiting event comes near and America takes its revenge.

After the several attacks planned by the mastermind devastated the country, Laden managed to escape and was nowhere to be found. These horrific events of chaos, deaths, the invasions of special forces into the countries of Afghanistan and Iraq have been wonderfully depicted in the novel. And when after 10 years, by the Spring of 2011, the intelligence reported the traces of Laden at Abbottabad, it was finally time to eradicate and put an end to the evils of terrorism spread by this most-wanted man. Readers would love reading this novel for it records every crucial detail regarding the planning, strategies to the final steps of prosecution, this is undoubtedly a brilliant book that deserves to be read by readers of all ages.

7. Run to the Sound of the Guns by Nicholas Moore

Based on a true story of an “American Ranger at war in Afghanistan and Iraq”, Run to the Sound of the Guns by Nicholas Moore focuses on the real-life account of an Elite American Ranger, who almost lost his life while leading the way to the foreign lands to win a war that was secretive. Part of the  U.S. Army’s 75th Ranger Regiment, the narrator portrays true, horrific events that took place during wars, some rescue missions, and most attempts of staying alive while fighting for the country. This deeply personal book is going to touch every reader’s heart.

Moore’s rise from being a private to senior non-commissioned officer changes his life even more as a soldier, he had to engage in brutal combats, on secretive rescue missions such as the difficult rescue mission of returning Private First Class Jessica Lynch to the country and the search and rescue mission for U.S. Navy SEAL Marcus Luttrell. The novel features many other gripping, nerve-chilling experiences of war, of lives and deaths, and the celebration of staying alive to telling the story to the world, Moore does a wonderful job!

8. The Strongest Tribe by Bing West

A remarkable novel by Bing West that focuses on “War, Politics and the Endgame in Iraq”, this extraordinary piece of work by Bing West takes readers towards the end of the Iraq War. Serving as a notable work when considering the Iraq War, the readers are taken back to the time when the Americans were making mistakes after mistakes in the Iraq War due to the lack of proper planning and command.

It was when the Americans lost faith, and many had given up on war, there rose the powerful figures of two Generals David Petraeus and Raymond Odierno, that led the war to take a sharp and notable U-turn. It was with the right command of these two leaders, it was finally time to put an end to this horrific war that lasted much longer than it should have. A novel that takes you through the ups and downs, the true side of the war where soldiers and the country had no hope and had almost given up.

9. The Good Soldiers by David Finkel

The Good Soldiers by David Finkel is the Prequel to the Bestselling Thank You for Your Service, which is now a popular Major Motion Picture. Pulitzer Prize-winning Washington Post reporter David Finkel presents the world with the true story of the soldiers who returned home from the battle but were forever changed.

Finkel was there with the soldiers at Baghdad when the soldiers were deployed to carry out the ‘Surge’ that George Washington announced as a new strategy for Iraq. Did everything go well? What happened to the soldiers in Iraq? Why did they return home all changed? There are so many questions to ask, and even more, answers to find in the novel.

10. The Long Road Home: A Story of War and Family by Martha Raddatz

The last one on our list is a heart-touching story of “War and Family”, The Long Road Home is filled with horrors of war, and the account of a “Black Sunday” a battle during one of the deadliest periods of the Iraq War.

ABC News Chief White House correspondent, Martha Raddatz, who has reported frequently from Iraq presents the world with the true picture behind the 2004 ambush in Sadr City, molding it into a horrifying story that also focuses on families whose loved ones were at war.