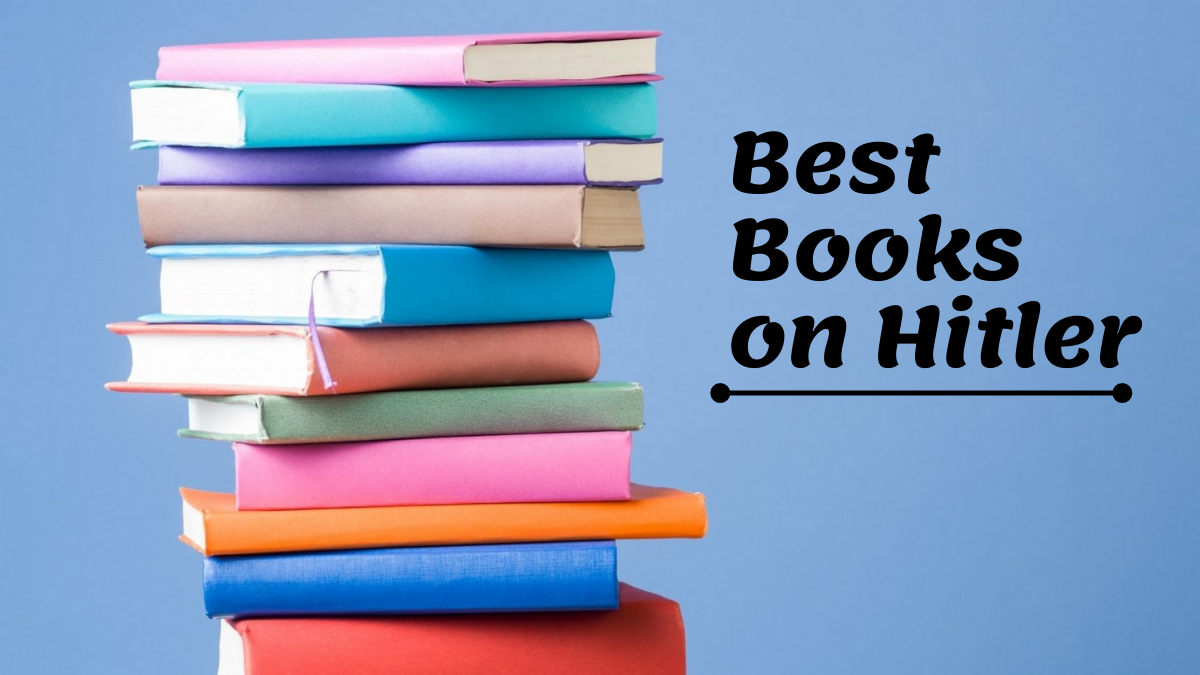 Adolf Hitler, was a dictator so powerful, that he shook the world with his conquests and adamancy. Hitler was among those dictators whom people admired at the beginning, and then slowly began to fear. His hatred against Jews, and rising of the power of Nazis, the holocausts, concentration camps where Jews were burned alive, everything began to turn into a living hell under the dictatorship of Hitler.

It was Hitler who had shown the world the power of man-made war and violence, and also its horrific consequences such as his eventual downfall and demise. Since every beginning has an ending, Hitler’s power also came to an end, and he had to surrender. But people today remember Hitler for his conquests, militancy, and his ability as a sole political leader who shook the world with his power of dictatorship. If you are curious about knowing more about Hitler and his reign, then here are the best books that will take you closer to his lifestyle as a dictator.

What can be better than a book written by Adolf Hitler himself that served as a Bible for the Nazis? Mein Kampf is undoubtedly the most important book in the history of Nazis and his reign.

MeinKampfmeaning “My Struggles” is one of the most powerful political manifestos that directly reflects the thoughts of the dictator. It was published in two volumes in 1925 and 1927, and became a must-read for all Nazis that inflicted more hatred on them regarding the Jews, and made them believe how they were going to rule the entire world one day. By reading Mein Kampf, you will be able to gain a deep insight into Hitler’s thoughts and ideas of dominating the world.

Volker Ullrich has written two books on Hitler based on his “Ascent” and “Downfall”. Both of these books are very important for they record the life of Hitler, his reign, and his rise and fall.

Both the books on our list are New York Times Bestselling novels and hold a very important place among the list of books written on Hitler.

The book on Hitler’s “Ascent” is where Ullrich traces the life of the powerful dictator, from his childhood to his coming into power. Just like a man cannot become powerful in a single day and rule the world, the novel begins from the roots to give a better insight to readers on how Hitler rose into power from a common man. From experiencing the “First World War” to becoming the reason behind the “Second World War”, this man with exceptional political skills and a horrifying worldview will help you picture all that happened in the past.

3. The Third Reich: A History of Nazi Germany by Thomas Childers

The book revolves around the “Third Reich”, how a group of obscure men who claimed themselves as Nazis and had an incomparable hatred for Jews, rose into power, all but to bring chaos, destruction, and death.

When Hitler developed his dominating, horrific political views, he began to attract like-minded people, and it was like this that the Nazis slowly began to rise in number. And then one day, Hitler had his own party that was powerful, fearful, and transformed a dysfunctional democracy into a totalitarian state. TheThirdReichwill show how Hitler came into power, and how he misused that power to bring horrors into the world, and especially to the lives of Jews.

Though not a direct account of Hitler, LetterstoFreyais the story of the man who tirelessly fought as a lawyer on the behalf of Jews to save them from the clutches of Hitler. Helmuth was an aristocratic young Christian Lawyer drafted into the German Intelligence Service and was devoted to bringing a change for the Jews while fighting tirelessly for them.

It was in the year 1939 that he was taken into prison by the Nazis, and began writing letters to his wife Freya that contained the truths to what was happening inside “The Third Reich”. He continued to record things that Helmuth witnessed from the prison until he was finally executed in the year 1945. Gathered, these letters prove to be of great importance because it contains authentic information during the times of World War II and the Holocausts.

5. The Rise and Fall of the Third Reich by William L. Shirer

A bestselling novel that won the National Book Award, TheRiseandFallofThirdReichby William L. Shirer is a comprehensive account of the life of Adolf Hitler, his rise as a leader of the Nazis, the Holocaust, and World War II. A book that features the rise and fall of Hitler, his power of manipulation, molding young men and women into Nazi Soldiers, everything was incompatible and fearing. But when every beginning has an end similarly, every rise has to go through a fall sometimes, and so did Hitler.

After losing and surrendering during the end of World War II, and before the Nazis could burn their important evidence, they were all captured by the allied forces, and the nightmarish reign of Hitler came to end. This book is truly intriguing, readers would go through a whirlwind of emotions while reading it, and will go from admiring Hitler, hating to pitying him.

Hitler’sViennaby Brigitte Hamann talks about the dictatorship of Hitler, and the socio-political climate of Vienna that was rapidly changing due to the emergence of Nazis, and Hitler’s coming into power. Acclaimed as a bestseller in both Austria and Germany, Brigitte portrays the time, the formative years in which Hitler stayed in Vienna, and how he changed the political environment of the Hapsburg Empire.

Brigitte Hamann throughout her book brings out the disturbing social and political ideologies that created unrest among the people. From being a breeding ground for obscure political theories to indoctrination into devastating racial politics, Vienna became the hotbed of Hitler’s indiscreet politics.

7. Inside the Third Reich by Albert Speer

This novel is of great importance because it presents the “Memoir” of Albert Speer who was the Architect and later Minister of armaments for Hitler. Born in the year 1905, Albert was apolitical unless he reluctantly went to listen to a speech of Hitler and unknowingly got inspired and decided to join the party.

Since Albert Speer studied Architecture, he was welcomed to the party, and from then, he rose to become the Minister of Armaments, appointed by Hitler during World War II, and from there he got to watch Hitler and his actions very closely. With his new responsibility, Speer began to look after the production of weapons and remained loyal throughout Hitler’s reign. And it was when he was at Spandau Prison serving his 20 years long prison, he wrote this book to purge out his guilt. Call it a personal or a great political account, this book is equally intriguing and fascinating.

8. The “Hitler Myth”: Image and Reality in the Third Reich by Ian Kershaw

If you are looking for a book that will bust the myths of the “Third Reich” and will take you to the reality of it, then you should definitely read Ian Kershaw’s book.

Although Hitler was a man who had a magnetic personality, and could move the world with his words, he certainly had some major flaws as a dictator, and these flaws eventually brought him his downfall. There were millions who adored Hitler, but Ian Kershaw in his book busts many “Hitler Myths” and brings out the truth, to let the world know what was actually happening inside “The Third Reich”. A remarkable book that must be read by all those who are fascinated with Hitler and his life story.

9. Hitler’s Last Secretary: A Firsthand Account of Life with Hitler by Traudl Junge

As the title suggests, hearing the truth of Hitler’s last days would be fascinating, isn’t it? Traudl Junge was a woman with dreams to become a Ballerina, but when she received an offer to become  Secretary of Adolf Hitler, her life took the most unexpected turn.

From attending meetings to typing Hitler’s speeches, Junge has been through all and remained at her service until the final days of Hitler. Her intimate job position made her very close to Hitler, they even had their meals and spent evenings together most of the time. This intimate and detailed memoir of Traudl Junge takes readers to the time of her 2 and a half years of service as a Private Secretary of the most fearful dictator, to hearing a gunshot that is, Hitler’s suicide. Her memoir was written right after the war ended and Hitler’s death, so it depicts her fresh experience, and information that is authentic, and events presented just the way they were.

10. The Last Days of Hitler by Hugh Trevor-Roper

The last book on our list is also a detailed account of the last days of Adolf Hitler. Many of you might have known about Hitler’s rise and his coming into power, but if you are one of those who want to know in detail about the end days of this world-famous and fearing dictator, then here is the ideal book for you written by Hugh Trevor Roper.

A classic published in the year 1947, revolves around Hitler’s sudden disappearance after realizing Nazis were losing the war, to the time when Hitler had killed himself in Berlin, readers will remain glued to this book until they have finished their last page and released a sigh of relief.

These 10 books on the list are surely some of the best among the lists of hundreds of books written on Hitler. Since most of these books on our list are personal accounts and narrated by people who were directly or indirectly associated with Hitler and have closely examined him, these books serve as the most authentic versions of Hitler’s life and reign.