Best Books of the Decade 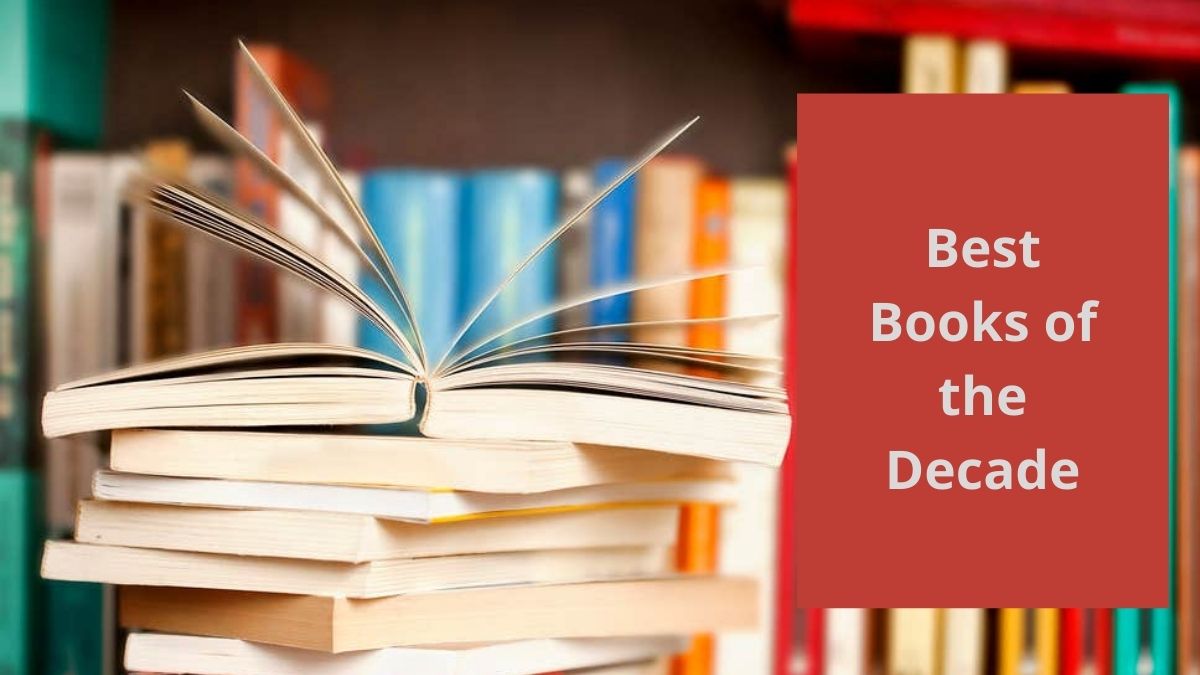 Reading has been not only a constant good habit in our lives since our childhood but also has helped us become the persons we are today. From reading books for school examinations to reading for pure pleasure, we all have developed an unconditional love for reading books in the journey of our lives in different ways.

While some readers choose to read books for time pass, whereas others read to expand their knowledge and transmogrify into a different world where they can forget their worries. Our top 10 list of books of the decade has been selected keeping in mind all kinds of readers.

1. The Ministry of Utmost Happiness by Arundhati Roy

One of the best modern Indian writers, Arundhati Roy’s The Ministry of Utmost Happiness depicts a tale of contemporary India where the lives of several characters are interconnected even though they aren’t aware of it or are strangers. In her novel, Roy features the capital city of Delhi and the beautiful state of Kashmir where the characters undergo some incidents, but their experiences are interconnected with each other.

Lahiri in her novel explores the themes of religion, relationships, and the discovery of trans-identity. Explore the Indian subcontinent, dive deeper into the lives of the characters struggling under the conventions of Indian society. Through this well-woven, engaging plot witness the cityscape (Delhi) and the valley of mountains (Kashmir) come together to tell an intimate story.

Adichie’s Americanah features the story of Ifemelu, a young woman from Nigeria who comes in search of her “American Dream”. Ifemelu gets enrolled in a renowned university in New Jerseyas a fellowship writer, and everything in her life changes from thereon.

The novel begins at a point when Ifemelu is making preparations for her return to Nigeria, her root, and the place that she belonged. She had broken up with her American boyfriend and now that she is about to return to her native land cannot help thinking about her first love Obinze, who is now rich and married. The incidents throughout the novel taking place in the life of Ifemelu, and some narrations from the point of view of Obinze give readers a wonderful experience. Keeping aside the issues of race and Ifemelu’s struggles, this novel is a story of love and loss.

3. The Testaments by Margaret Atwood

Margaret Atwood the famous author of The Handmaids Tale returns with a sequel after more than 15 years of wait. The Testaments is set on the same fictional Puritan theocracy of Gilead as in “Handmaid’s Tale”, and this time the narrative focuses mainly on Aunt Lydia, Nicole, and Agnes.

The Testament features a tale of rivalry between Aunt Lydia and Aunt Vidala, Agne’s shocking discovery of her being adopted, her coming into age realizing the dangerous patriarchy that prevails in Gilead, and many other incidents that act as a perfect sequel to the original tale.

For readers who have already read and watched The Handmaids Tale, their long wait is going to satiate with this perfect sequel that has many shocking incidents for you to discover.

The world-renowned author of Beloved and The Bluest Eye, Toni Morrison returns with another masterpiece and a heart-touching tale in God Help the Child.

Another novel by Morrison that explores the issues of racism, sexual abuse, troubled childhood, and ignorance, God Help the Child is the tale of “Bride” aka Luna Ann Bridewell born to a yellow mother and is rejected as an infant for her change of skin tone from pale to Sundanese black. Luna’s mother insists to call her Sweetness instead of mother because she never really wanted that coming from her. Luna’s father Louis abandons them the moment Luna is born. The novel begins with Luna who asserts herself as Bride and is a grown-up young woman on a quest to find her lover Booker Starbern. Her journey leads Bride into a sequence of epiphanies that ultimately changes her perception of life and herself.

5. Bring Up the Bodies by Hilary Mantel

A novel that explores the intriguing Tudor history and is a sequel of the celebrated novel Wolf Hall, Hillary Mantel’s Bring Up the Bodies depicts the downfall of the reign of Anne Boleyn. This historical fiction also revolves around the character of King Henry the VIII of England, and his bitter relationship with Anne Boleyn, his second wife whom he was always attracted to and had been able to marry her after 7 years of the long wait. But as the plot unfolds, the King doesn’t find Anne attractive anymore and her wits and intellectuality had become his reason for disliking her even more. Also, Anne fails to deliver a male child to the throne who could have been an heir.

Will Anne be able to maintain her position as a queen and prevent the king from remarrying? There are many more shocking and interesting events to discover throughout the novel. Mantel’s masterpiece is a pleasure read for all types of readers.

The first Northern Irish writer to receive the Booker Prize in Fiction in the year 2018, Anna Burns has received a lot of appraisal for another remarkable work of hers. Milkman is set in Northern Ireland, the story revolves around an unnamed city and an 18-year old girl whom Burns refers to as “Middle Sister”. Throughout the novel, Burns presents the characters with no real names but by what they represent, such as the “maybe-boyfriend” of a middle sister whom she’s in a relationship with, the middle-agedMilkman who approaches middle sister to date with him, the Tablet-girl who is insane and poisons random people and many other minor characters.

The story revolves around Middle Sister and how her life is threatened after being approached by the Milkman. Various events follow after Middle Sister refuses the Milkman’s offer. Will she be able to get rid of him? Will her maybe-boyfriend believe the disgusting rumors spreading about her? Readers have a lot more to discover by the end of the novel.

Harumi Murakami the Japanese modern fictional writer who has gained world recognition after his works have been translated into English, his works have been regarded as some of the best modern books written so far. Murakami’s Killing Commendatore is based on an artist who when abandoned by his wife, his life takes dramatic turns and leads him towards the home of Tomohiko Amada his father’s friend and a renowned artist lying in the nursing home. Amada has many paintings in his attic that the narrator goes on to explore and finds a painting named “Killing Commendatore” depicting a scene from the Mozart opera Don Giovanni. This painting opens a circle of mysterious circumstances that affects the perspective of the narrator deeply and plays a vital role in his perilous journey to implore the circumstances. Will he be able to resolve the mystery? Will remain a mystery unless readers read the novel.

8. Lincoln in the Bardo by George Saunders

Lincoln in the Bardo by Saunders focuses on the character of William Lincoln, the son of Abraham Lincoln who is in the “Bardo”, a state that he believes between life and death. William or “Willie” dies of typhoid at an age of 11 and wakes up to find himself in Bardo, a world of the dead where he is greeted by dead people. Call it a ghost story or a tale of the author’s fantastic imagination, this novel by Saunders is undoubtedly a pleasure to read for all kinds of readers.

Willie meets his dead father, but all the ghosts in the Bardo are stuck, they have not been able to reach the afterlife because they feel they have some kind of sickness. Does Willie find a way to escape from the trap or rather the Bardo? Will he help the other saddened ghosts to reach the afterlife? Willie has many heroic abilities to reveal, and many hearts to win.

9. The Sense of an Ending by Julian Barnes

In the Sense of an Ending by Julian Barnes, Tony Webster has retired from his job and is divorced. Although he has an amicable relationship with his ex-wife and daughter and leads a peaceful life, Tony’s life takes an unexpected turn when he encounters a friend from the past Adrian Finn who is no more on friendly terms.

Tony begins his narration by recollecting his childhood and introduces the readers to Adrian, and the events that led to the bitterness between the two that remain in the present (Adrian’s dating of Veronica who was Tony’s sweetheart). The greatest twist lies in the fact, Adrian had long committed suicide, and his wife Veronica who was also a childhood friend agrees to meet Tony. Then how do things from the past all of a sudden begins to haunt and threaten Tony? The plot is psychological, emotional, and sophisticated at the same time. Tony’s narration is so captivating that it will keep readers glued until the final truth has been unveiled.

10. The Goldfinch by Donna Tartt

The Goldfinch by Donna Tartt is the last book on our list that has been regarded as the best of the decade, follows the story of Theodore Decker, who loses his mother at the New York City Metropolitan Museum. Theo recalls the moment, 10 years ago when he came to the city of New York with his mother to the museum, to witness the unique piece of art “The Goldfinch”. And there is a sudden bomb explosion that leads to the death of Theo’s mother, others around them are found dead or badly injured. Theo somehow survives and runs from the spot with the masterpiece, but on his way encounters an injured man who presses a ring into his hands and says something about a business. From that day, Theo’s life changes completely, having been orphaned, he must choose his ways to survive. The main interest lies within the masterpiece “The Goldfinch”, the old man’s ring, and a business that he said about. Theo’s coming-of-age quest has many intriguing events to unfold.